From TsPSh to universities. As taught in the Russian Empire 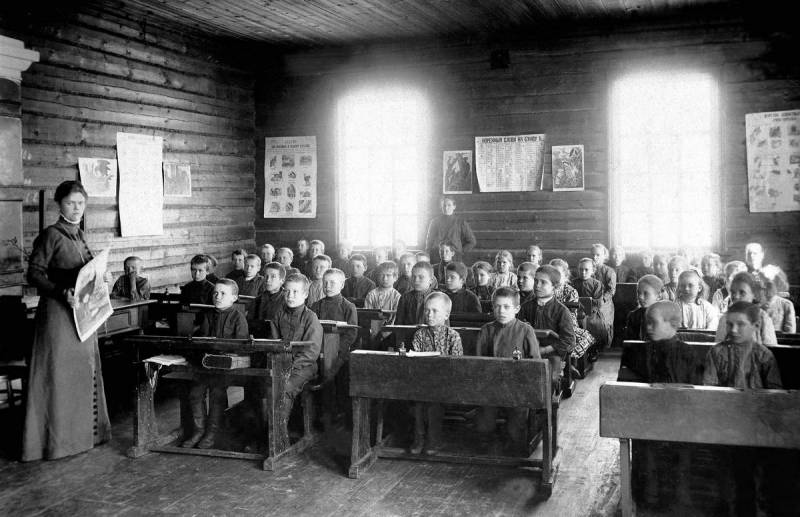 According to the census conducted in 1920 in the RSFSR, 60% of those did not know how to read or write. Agree, this is somehow not very compatible with the statements that have been heard recently that under the Tsar-Father Russia had almost the best and, most importantly, affordable education system in the world. So how was it really?


In a rather fierce dispute between those who claim that the Bolsheviks got an absolutely illiterate country, and their opponents, foaming at the mouth, proving the opposite, the truth, as usual, lies somewhere in the middle. To prove this statement, I will allow myself to cite just one specific figure: according to the scientific work "Population of Russia for 100 years (1813-1913)" published before the revolution, at the end of the 63th century, about 1913% of those called up to serve in the Russian Imperial Army did not have a diploma. and in 33 - about XNUMX% of the recruits. From more than half to a third, the progress, you see, is impressive.

It happened mainly because it was at the beginning of the twentieth century that the empire saw a real, as they say today, "breakthrough" in the field of public education. At the same time, education, accessible to all estates, as such, appeared only after the abolition of serfdom. Until now, the peasantry (which constituted the absolute majority of the country's population) was almost completely illiterate. That is why I will consider the Russian education system from the very moment when it began to represent at least something really massive.

First of all, I would like to note that a number of government departments and, again speaking in modern terms, non-governmental organizations have been dealing with this issue in the country. The first among those who "sowed what is reasonable, kind, eternal" was, of course, the Ministry of Public Education. But on the second, no matter how shocking it may be to some wiseacres who consider the church to be an eternal persecutor of education and an outpost of obscurantism, there was the Synod of the Russian Orthodox Church. The departments of Empress Maria, the Imperial Philanthropic Society and other similar organizations were also involved in public education.

Specialized educational institutions stood somewhat apart: the military and naval ministries, the ministries of finance and the interior. I'll start with them. So, the future defenders of the Fatherland were trained (in descending order) in military academies, officer schools, cadet schools, cadet corps, as well as military gymnasiums and gymnasiums (the latter were one step lower than the first). Commercial schools and institutes can be considered another type of specialized educational institutions. The name comes not from the fact that they had to pay for training at commercial prices (almost all training was paid in the empire), but because it was the future businessmen who were taught there. A rough analogue of the future Soviet trade schools and institutes.

The educational institutions that belonged to the department of the church included not only theological academies, seminaries and schools, but also such, almost the most widespread type of educational institutions, as Sunday and parish schools. In the Sunday schools of that time, it was not only children who studied and studied there not only the Holy Scriptures. They also gave initial literacy (at the read-write level) and were equated with elementary schools. Parish schools (TsPSh) were the path to literacy for the absolute majority of the poor and needy population of the Russian Empire - after all, they were free and generally accessible.

The most widespread secondary educational institution in Russia was the gymnasium. It was there that it was necessary to pay for education and not everyone could afford such pleasure, even in the city. There was no need to talk about the villagers. Gymnasiums were divided into male and female, public and private, classical and real. The latter did not give the opportunity to go to university, since they did not study such an important subject as Latin. Subsequently, they were transformed into real schools, with emphasis on applied and exact sciences. Higher education after them could be obtained either technical or commercial.

For a completely impoverished public from the villages and from the workers' outskirts, in addition to the Central School of Arts, there were also other institutions belonging to the system of elementary public schools - zemstvo schools, for example. Education there went to one or two grades and lasted from 2 to 4 years. There were trade schools (for example, railways). A separate type of educational institutions were various women's courses and several institutes for noble maidens. Generally speaking, with the formation of the weaker sex in Russia, things were bad for everyone except for the nobility.

Also, a separate place in the educational system was occupied by institutions that trained personnel for itself. These include teachers' seminaries and schools, as well as institutes. The latter, by the way, were also purely male. Finally, the crown of public education in the Russian Empire was higher educational institutions - universities, of which there were about a dozen throughout the country, and institutes, of which, of course, there were more. Tellingly, the technological institutes belonged to the Ministry of Public Education, and the rest belonged to those departments for which the personnel were trained.

All this, of course, is a rather general picture, and I must have missed something while drawing it. Do not judge strictly. As you may have already understood, the education system in the Russian Empire was complex, confusing and contradictory. Its main shortcomings were, first of all, the depressing estate, which gave rise to an almost complete blockage of social elevators in society and terrible poverty: most of the educational institutions, where three skins were not tore for science, existed on all kinds of donations and charitable contributions.

The draft reform, according to which at least primary education in Russia was to become universal, the State Duma “chewed” for seven years, until 1912. According to him, something similar to the normal system of teaching children should have appeared in the European part of the empire by 1918, and on the outskirts by 1920. However, the State Council successfully buried this draft, submitted after consideration by the Duma. In the same 1912, Nicholas II, who nowadays is called by some people almost "the tsar-enlightener", deigned to "write the highest" that there are "enough" universities in the country from the empire ...

The Russian empire, of course, had far from the worst in the world and not so backward system of public education. However, Russia was able to become a country of universal literacy, the most reading in the world and possessing the most powerful scientific personnel only after the establishment of Soviet power.

Ctrl Enter
Noticed oshЫbku Highlight text and press. Ctrl + Enter
We are
Chernobyl notebook. Part of 3The hunt for the Blackbird
Military Reviewin Yandex News
Military Reviewin Google News
111 comments
Information
Dear reader, to leave comments on the publication, you must sign in.