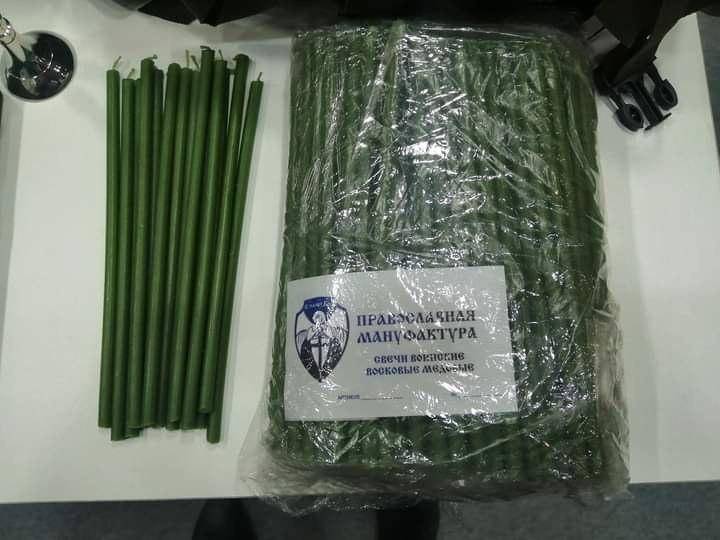 Well, we can congratulate ourselves. At the forum, where new items of the military-industrial complex were previously demonstrated, now ... yes, they also demonstrate new items, but somehow they smell strangely, to be honest.


When on "Army-20 ..." Tanks, which even if they appear in the troops, it is clearly not during our lifetime, the technology of tomorrow, about which the same can be said, you know, it was normal. What will happen tomorrow or the day after tomorrow - why not show it today?

Even if it never will. Kind of like the mock-ups of nuclear destroyers and aircraft carriers with a displacement of 100 tons. Why not tell a beautiful fairy tale for the layman? We have many such believers ...

By the way, about the believers.

Here is tomorrow that is shown today. This is already being discussed by specialized publications in the world, commenting on who in what way.

Cassocks in the "pixel" and green candles. Military wax. 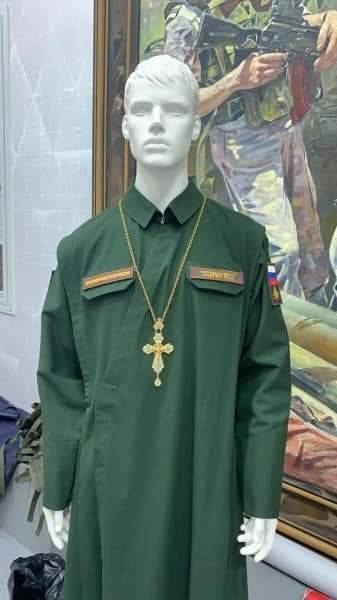 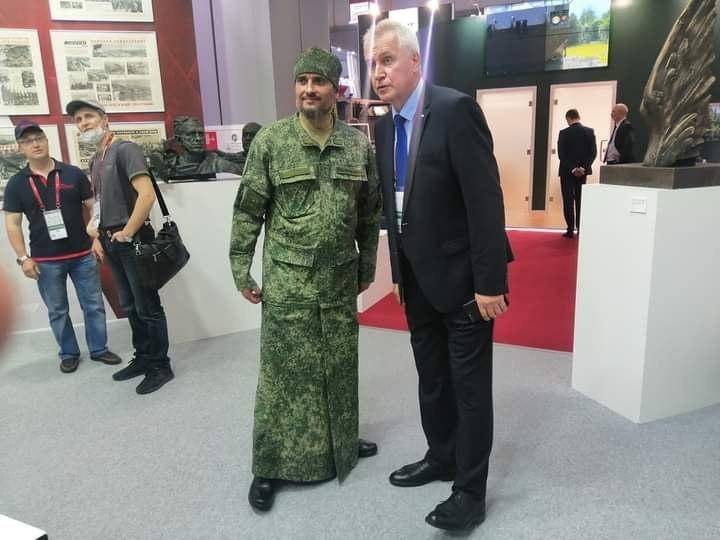 In general, of course, the penetration of the ROC into the army evokes different emotions in everyone. I am already silent about representatives of other religions. In our army, everything is the same: if you want to send spiritual needs, get baptized. If you are a Muslim, a Catholic, a Buddhist, a Jew, or anyone else, these are your problems.

But, in general, it has always been like this in our army. That is not according to the charter, all your problems. And though Orthodoxy is not included in the charter (yet), it is blessed by the commander-in-chief. That is why billions are flown from the budget to the chief military church, therefore they sprinkle holy water on everything, from cartridges to ICBMs.

Well, now, the robes and candles of the appropriate color. To be honest, I do not quite understand how the “civilian” candle differs from the “military” one, and therefore I cannot explain it with anything other than another way to make money.

As for the military field robes, then there is no surprise. 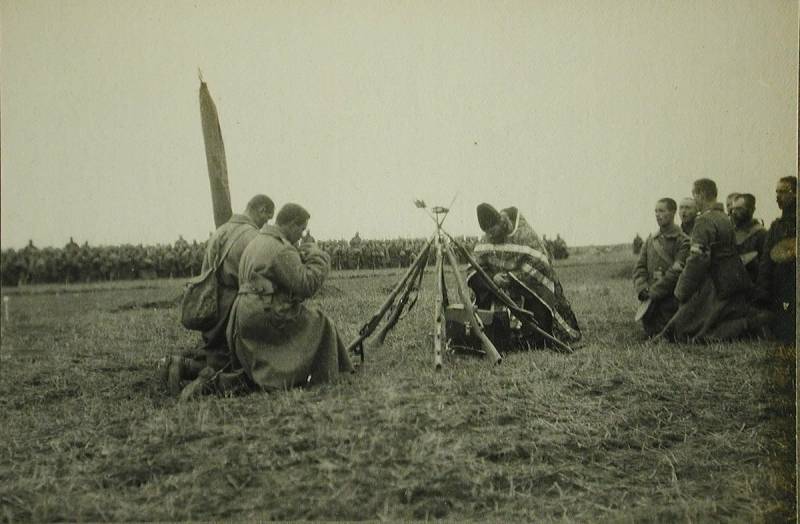 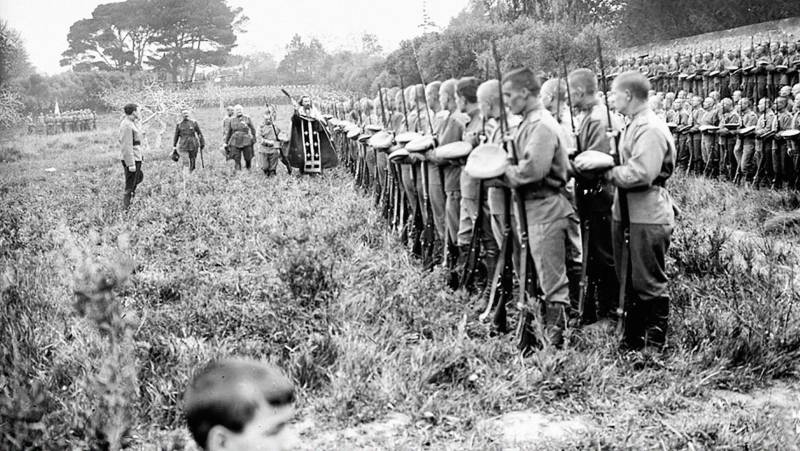 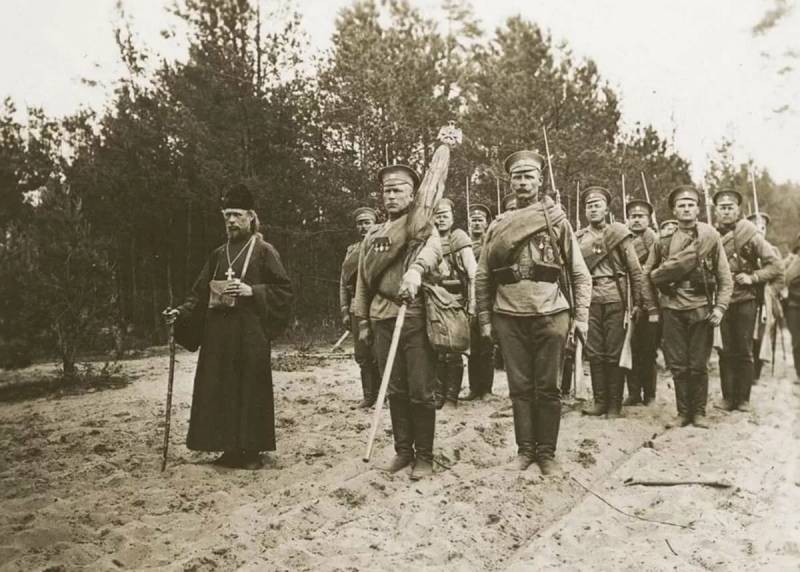 Regimental priests of the First World War must be treated with respect and awe. Excuse me, there were no political commissars and deputies for the fight against personnel then, so all the encouragement and parting words of the Russian soldier lay on the shoulders of these people.

However, all this was more than a hundred years ago. It is understandable: "It's safer to live with God, it's easy to die with God" (as one famous performer sang), but nevertheless the world has changed somewhat over the past century.

Putin's current stakes on the ROC as a substitute for the institution of political workers and army psychologists looks twofold.

On the one hand, this is sheer powerlessness. Refusing to train political workers, closing all political schools at the end of the last century, the army leadership, together with the country's leadership, simply removed those whose duty was to prepare the heads of conscripts (especially) for combat training and work.

Experiments with psychologists and deputies for work (wrestling, as they called it in the army) with personnel also failed.

And now - the priests.

Today, yes, the clergy are more than actively involved in the affairs of the army. They baptize those who wish, conduct services, sprinkle holy water on a variety of military equipment, from ballistic missiles to submarines. 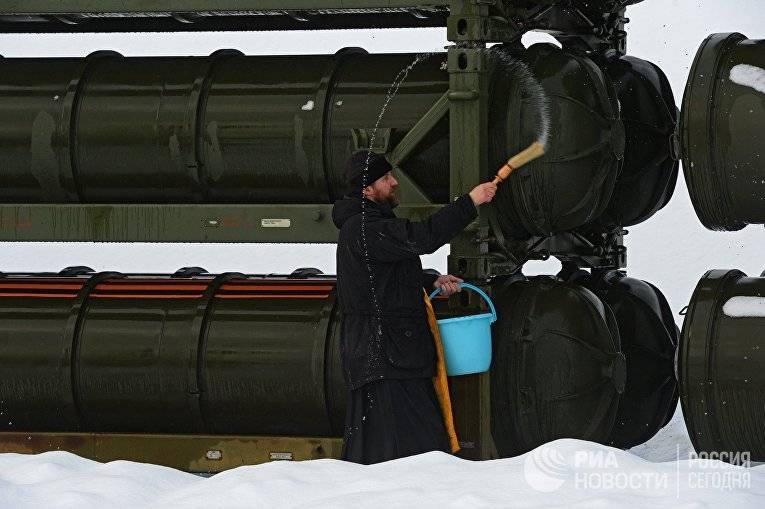 It is difficult to say how much all this will help the technology to work properly (the experiment with the Proton showed that it does not help), but everything looks peculiar in the 21st century.

Especially in the light of the statements of some people from the Russian Orthodox Church about how to bless weapon mass destruction is not according to the commandments of God. It is one thing to bless a soldier who will defend his land, and another thing to bless an intercontinental missile that will blow tens of thousands of the same ... slaves of God into steam.

Somehow it's not according to the commandments.

As for the green candles and pixel cassocks - well, it doesn't look very surprising. We cannot build an engine for a destroyer, a spaceship is difficult. Booster rocket. The only thing left is to rely on God.

In fact, endlessly respecting the priests of the First World War and their work, I would have preferred an extra carriage of shells to a good liturgy. I am sure that everyone at the front at that time would also have preferred it. It is clear that there are no atheists in trenches under fire, and the word of the shepherd, parting words - it is not superfluous. But in conjunction with a good portion of porridge with meat, a couple of extra pomegranates and hundreds of rounds. Then - the case.

But I don't really want to remember how things were in the Russian army during that war. And what was the result, and even more so. So we won't, that's not the point.

The point is that a camouflage cassock with an indication of the clergy and green candles - this, of course, looks funny, but is it so important today? Is it really more important than a new technique, the terms for which are constantly "shifted to the right" ad infinitum?

Of course, if the president of a seemingly secular country and the commander-in-chief of the army decided so ...

But then it is really worth remembering that we have a multi-confessional country and every citizen, according to Article 28 of the Constitution of the Russian Federation, has the right to religion in accordance with the way it is spelled out in the article. And here we have the oppression from the ROC of all other confessions.

In theory, then a mosque, a church, a prayer house, and so on should stand next to the church, which is in each part. Because, according to the Constitution, we all have the same rights. And Muslims, and Jews, and Orthodox. All.

True, the army will then finally turn into a religious mess, but then everything will be according to the Constitution.

But this is the army. Where almost formed personalities come today, who themselves can decide where to go and why.

And what is the level below?

A level below the school. In which there seems to be some kind of amorphous patriotic education. Not to reproach, by the way, Putin, but from time to time he tried to portray something like that in terms of school patriotic education of children. Another question is that it all turned out so-so, because the performance ...

But this was exactly how it was with us in life. Somehow, but from the heart.

And in May of this year (on the 22nd), Putin introduced a number of amendments to the law on education to the State Duma. It was proposed to add such things as a parenting program, an educational work plan and attestation to the educational program.

Certification in educational work - it smelled like the Soviet Union from the heart.

What should be included in the educational plan for Putin? And everything is the same. A sense of patriotism and civic consciousness, respect for the memory of the defenders of the Fatherland, their exploits, law and order.

Good? Yes, the words and terms are good. But in schools today there are some educational programs. How they are implemented is another matter. But it is unlikely that Putin's new ideas will be properly implemented, because they will be carried out by those who today can not do anything with the education of young people.

Not so long ago, being "in business" myself, I attended parent-teacher meetings, where I heard the same thing: we teach, you educate. The school is not obliged to engage in education and stuff like that.

The time of teachers remained there, in the USSR, today everyone wants to be purely teachers. Deservedly.

The fact that children are now, according to the Constitution, an important part of state policy, on the one hand, is good, on the other, not very good. This means that upbringing, more precisely, drawing up plans for educational work and methodological recommendations, will be dealt with by those who today cannot do anything from the word “absolutely”. That is, those who are trying to steer an old and rusty barge called "Russian education."

Long ago, somewhere in 2002-2003, Putin said that the basis of education should be all-Russian patriotism. So no one understood for almost twenty years what kind of thing it was. And today he does not understand.

And what will be able to instill and what to teach people who do not understand anything about the issue? Yes, everything will remain at the level of empty, but loud words.

And from schools will continue to release "otegassed" children who do not know anything about stories country, because they taught it from textbooks written by ignoramuses. And who are unlikely to be patriots of the level that Putin would like to see them. Simply because they will not be taught by patriots.

And what is the result? In the end, everything is simple: if a cultural worker does not work, a cult worker takes his place. And here pixel robes and camouflage candles come in handy. 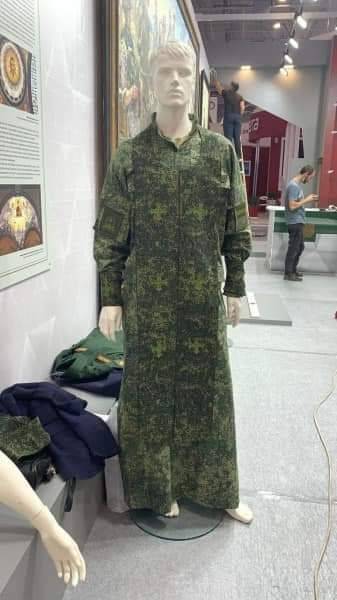 Because the state cannot offer anything more to a young man. But the church is easy. Good or bad in the 21st century, I don't know. It seems like nothing bad, but good in such a replacement is not enough.

But, as practice has shown, we are already being prepared for this.

Ctrl Enter
Noticed oshЫbku Highlight text and press. Ctrl + Enter
We are
What you didn't want to know about EnglandHow can Russia survive and win in the 21st century?
Military Reviewin Yandex News
Military Reviewin Google News
274 comments
Information
Dear reader, to leave comments on the publication, you must sign in.