"Our people, thanks to God, have asked such a pepper that it is pleasant." The defeat of the Turkish fleet in the battle at Cape Tendra 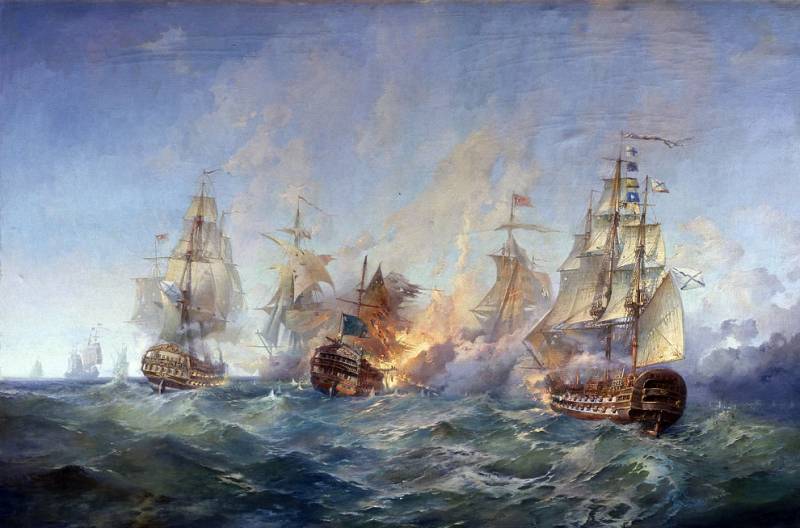 230 years ago, a Russian squadron under the command of Ushakov defeated the Turkish fleet at Cape Tendra. This victory broke the blockade by the Turks of the Russian Danube flotilla and created the conditions for the victory of the Russian armed forces on the Danube.

In 1787, Turkey began a war with Russia with the aim of taking revenge for previous defeats, regaining its positions in the Northern Black Sea region, restoring the Crimean Khanate and destroying the Black Sea Fleet, which was rapidly being created by the Russians. The Turkish plans were supported by France and England, who wanted to push the Russians away from the sea, drive them deep into the continent.

At the beginning of the war, the Turks on land had no superiority over the Russian army. However, they had great superiority at sea. Russian naval bases and shipbuilding and repair industries were in the making. The material supply of the fleet was just getting better. So, at the beginning of the war, the Turks had 20 ships of the line, and we - 4. In the number of small and auxiliary ships, the enemy was 3-4 times superior. Also, the new Russian ships were inferior in quality: in artillery weapons (the Turks had more large-caliber artillery), in speed. That is, the Turks had more ships, people and guns. The Turks had fairly experienced naval commanders.

At the beginning of the war, the command of the Black Sea Fleet was unsatisfactory. Admirals N. S. Mordvinov and M. I. Voinovich had good connections at the royal court, but were bad naval commanders. These admirals were distinguished by indecision, passivity, they were afraid of a battle with superior enemy forces. They adhered to a linear tactic, according to which the weak Russian naval fleet could not attack the powerful Turkish fleet itself. However, at the same time, a decisive and talented naval commander, Fyodor Fedorovich Ushakov, came forward. He was promoted through hard work and his high ability. The commander-in-chief of the Russian armed forces in the Northern Black Sea region G. Potemkin was able to see a great man in Ushakov and gave him protection.

Despite their relative weakness, at the very beginning of the war, the Russians at sea were able to give the enemy a strong rebuff. Liman rowing flotilla in 1787-1788 successfully repelled all attacks of the enemy fleet. The Ottomans lost many ships. The Turkish command was unable to use its superiority in large ships with powerful weapons, since maneuverable small rowing vessels had an advantage in the Liman. While stubborn battles were going on in the Dnieper-Bug estuary, the Sevastopol ship squadron was inactive. Its commander Voinovich was afraid of a decisive battle with the enemy. The indecisive admiral constantly found reasons not to take ships to sea.

After the decisive demands of Potemkin, Voinovich's ships went to sea in June 1788. In early July, Voinovich's squadron met the enemy fleet under the command of Gassan Pasha near the island of Fidinisi. The Ottomans had complete superiority: 2 Russian battleships against 17 enemy ships (in other ships there was an approximate equality of forces), 550 Russian cannons over 1500 Turkish. Voinovich got scared and withdrew from the fight. The Sevastopol squadron was headed by Brigadier Ushakov. He attacked and forced the enemy to retreat. This was the first victory of the Black Sea ship fleet. Now the situation at sea has changed radically. The Turkish fleet lost its dominance in the Black Sea. After Fidonisi, the Ottoman command gave the initiative at sea to the Russians for almost two years and did not undertake any campaigns.

In the spring of 1790, Ushakov was appointed commander of the Black Sea Fleet. He actively prepared ships and crews for hostilities. Turkey built new ships and refused to make peace. Constantinople hoped that Russia was weakened by the war with the Swedes (1788-1790), so there is an opportunity to successfully end the conflict in the Black Sea region. This led to the protraction of the Russian-Turkish war. The Ottoman command was about to conduct a series of offensive operations during the 1790 campaign. To land troops in the Caucasus and Crimea, to raise the uprising of the Crimean Tatars. In July 1790, Ushakov with a decisive attack defeated the Turkish fleet under the command of Hussein Pasha in the Kerch Strait (The defeat of the Turkish fleet in the Battle of Kerch). Thus, the Russian naval commander thwarted the enemy's plans to land troops in the Crimea.

Constantinople did not leave plans for the Crimean operation. The damaged ships were repaired, and on August 21, 1790, the main part of the Turkish fleet was located between Khadzhibey (Odessa) and Cape Tendra. Hussein Pasha had 45 pennants (1400 guns) under his command, including 14 battleships and 8 frigates. The Turkish fleet in this area held back the activity of the Liman flotilla and threatened the coastal flank of our army. On August 25, Ushakov put out his squadron: 10 battleships, 6 frigates, 1 bombardment ship and 16 auxiliary ships. They were armed with about 830 guns.

On the morning of August 28 (September 8), 1790, Russian ships were at Cape Tendra and discovered the enemy. The Russian admiral ordered a rapprochement with the Turks. For the Ottoman command, this came as a complete surprise. The Turks hoped that the Russian ships were stationed in Sevastopol. Seeing the enemy, the Turkish sailors hastily began to chop off anchors (to gain time), set sails and go to the mouth of the Danube. Our ships were chasing the enemy. The Turkish vanguard, led by the flagship, with an advantage in the course, went ahead, ahead of the rest of its fleet. Fearing that the lagging ships would be overtaken by the "infidels", pressed to the shore and destroyed or captured, Hussein Pasha was forced to make a turn. While the enemy was rebuilding, our ships lined up in a battle line. It included ships and part of the frigates. Three frigates remained in reserve.

At 3 o'clock in the afternoon, both fleets sailed parallel to each other. Ushakov began to close the distance. Russian ships had fewer long-range guns, so the Russian naval commander strove to get as close to the enemy as possible in order to use all the ship's artillery. Fyodor Fedorovich also strove to focus fire on the enemy flagships. He wrote: "Our fleet drove the enemy under full sail and beat him incessantly." As a result, the Turkish flagships suffered greatly. The skirmish and the pursuit continued for several hours. In the darkness, the Turkish ships, taking advantage of their speed, disappeared. The Ottomans walked without lights and changed course in order to break away from the Russians. So they managed to escape during the Battle of Kerch. 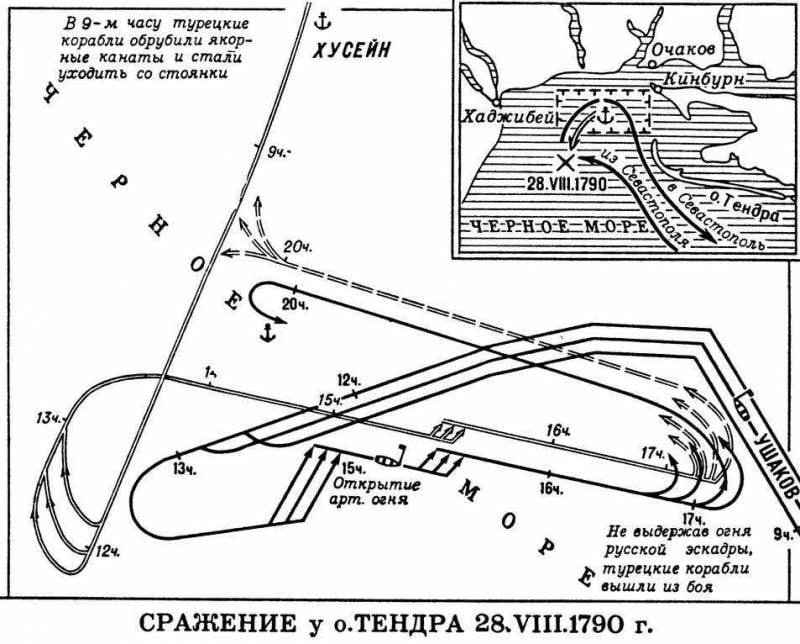 However, this time they were out of luck. On the morning of August 29 (September 9), the Russians again discovered the enemy. During the flight, the Turkish fleet was scattered over a large area. The Ottomans were demoralized and did not dare to fight. The Turkish admiral gave the signal to join and withdraw. The enemy tried to escape to the Bosphorus. Some of the Turkish ships were severely damaged, so they lost their speed advantage and lagged noticeably behind the main forces. At 10 o'clock the Russian ship "Andrey" overtook the Turkish junior flagship - the 80-gun ship "Kapudania". It was Said Bey's ship. For "Andrey" the ships "Georgiy" and "Preobrazhenie" approached. The enemy flagship was surrounded and fired upon. The Ottomans fought hard. Then the Russian flagship "Christmas Christ" approached the "Kapudania" at a pistol-shot distance (30 fathoms) and "in the slightest time inflicted the most severe defeat on it." The Turkish ship burned and lost all masts. The Turks capitulated. Admiral Said Bey, the captain of the ship Mehmet and 17 staff officers were taken prisoner. The ship could not be saved, it exploded.

At the same time, other Russian ships overtook and forced the 66-gun ship Meleki-Bagari to surrender. Later it was repaired and introduced into the Russian fleet under the name "John the Baptist". Several small ships were also captured. On the way to the Bosphorus another 74-gun Ottoman battleship and several small ships sank due to damage.

Ushakov's squadron won a complete victory over the enemy. The enemy fled and lost three ships of the line. The Ottomans were defeated and demoralized, lost, according to various estimates, from 2 to 5 thousand people (about 700 people were captured). Turkish ships were overcrowded: due to the constant flight of people, surplus crews (plus soldiers) were recruited. Russian casualties were minimal: 46 killed and wounded.

The Russian fleet seized the initiative at sea. A significant part of the Black Sea was cleared of the enemy. The Liman flotilla was able to provide assistance to the ground forces, which took the fortresses of Kiliya, Tulcha, Isakchi and Izmail. Ushakov demonstrated decisive maneuverable tactics in battle. His Serene Highness Prince Grigory Potemkin expressed delight at the victory of Ushakov and wrote: “Thanks to God, our people have asked such a pepper that they love it. Thanks to Fedor Fedorovich. " The Russian naval commander was awarded the Order of St. George, 2nd degree.