The veil of secrecy has been lifted. Celera 500L is officially presented 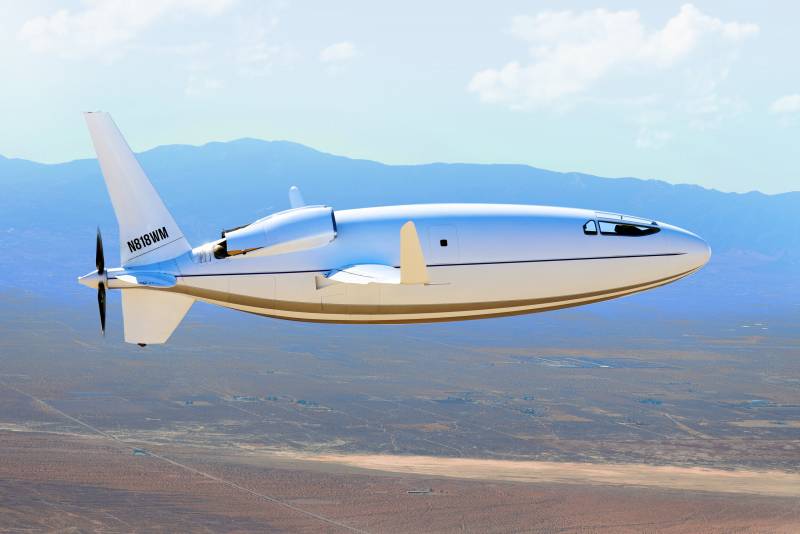 An unusual experimental aircraft was sighted in the United States several years ago. Later it became known that it bears the name Celera 500L and was created by the Otto Aviation Group. Soon, new data on the goals and results of the project appeared - but its developers were in no hurry to disclose official information. This happened only now, when the plane passed tests and confirmed its characteristics.

The existence of an unusual aircraft became known in the spring of 2017, when it was noticed at one of the airfields in California. Later, clearer photographs appeared in which one could see the registration number - and this gave new information. The name of the project and its authors have become known. Soon, a patent for a similar aircraft design was discovered.

However, until recently, there were no official data on the aircraft. Just a few days ago, Otto Aviation launched its official website, focusing on the Celera 500L project. The resource is replete with loud headlines: "it will change everything", "built, flew, tested", etc. In addition, photo and video materials are provided, as well as technical characteristics, etc. 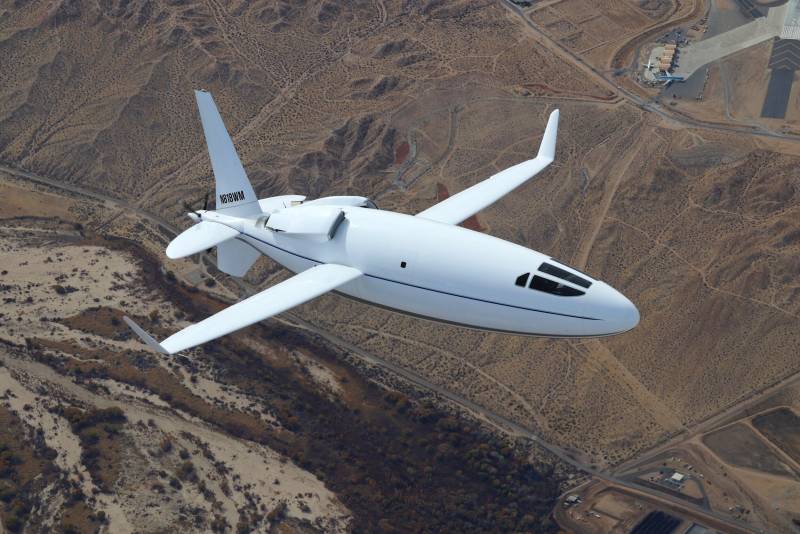 The goal of the Celera 500L project is the creation of a commercial aircraft with improved efficiency characteristics. They are achieved through a special aerodynamic design that provides laminar flow and reduces air resistance. The main solutions and technologies of the project are secured by seven patents.

The development company reports that the Celera 500L has passed flight tests to date. 31 test flights with a total duration of 35 hours were completed. The prototype confirmed the correctness of the solutions used and showed high flight and economic data.

The Celera 500L has an unusual appearance driven by aerodynamic optimization. Used fuselage in the form of an elongated ellipsoid, supplemented by a thin tail boom, with a minimum of protruding elements. Only in the tail section are protruding fairings of the air intake devices and empennage provided. A tail pusher propeller is also used, which does not in any way affect the aerodynamics of the aircraft itself.

A narrow wing of high aspect ratio was used with a minimum sweep along the leading edge and raised tips. The tail includes an elliptical stabilizer, as well as a keel and ridge with straightened edges. Used the minimum required set of rudders. 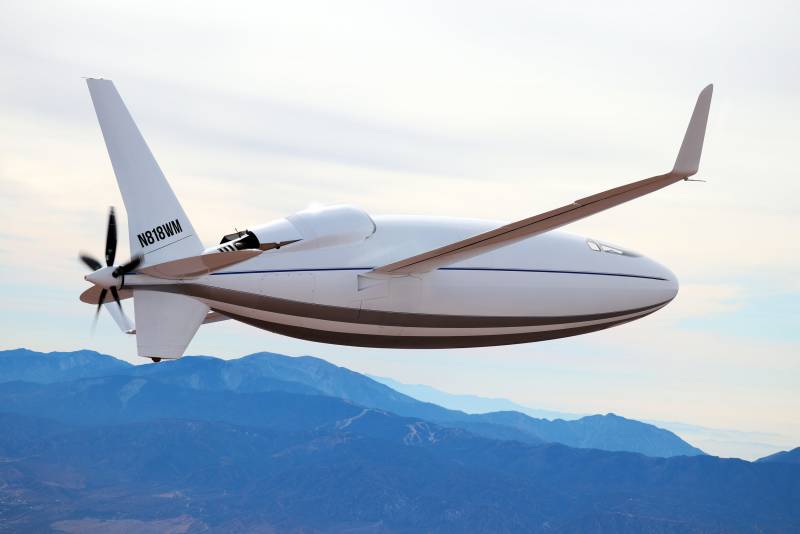 The experimental aircraft was equipped with a RED A03 water-cooled piston engine of the V12 scheme with a power of 550 hp. This engine is characterized by low weight and high power density. He can use gasoline aviation kerosene or biodiesel. Both rows of cylinders are made in the form of units with the possibility of autonomous operation to increase survivability. Engine operation is electronically controlled. Exhaust gases enter special nozzle devices, mix with atmospheric air and create additional thrust.

As conceived by the developers, the Celera 500L aircraft in the market should push the existing "business jets" and possibly influence other areas of air transportation. This will be facilitated by the presence of a number of flight technical, operational, economic and environmental advantages - all this is due to the special appearance of the machine.

The special contours of the airframe provide a laminar flow. Research has shown that the Celera 500L has 59% less drag compared to a conventional aircraft of the same size and performance. The aerodynamic quality has been brought to 22 and significantly exceeds the performance of competing cars. 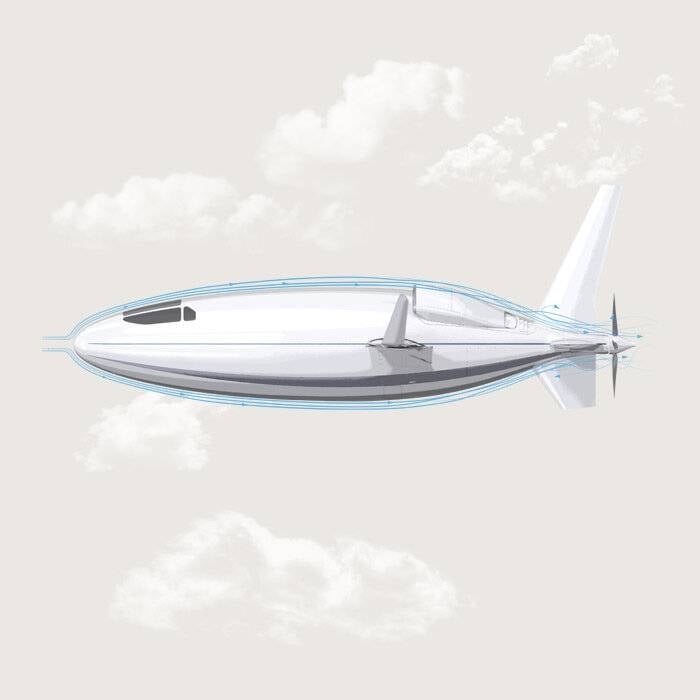 Operating costs are reduced accordingly. The cost of a flight hour is declared at US $ 328. For competitors, this parameter can reach $ 2,1 thousand. A sharp reduction in emissions is also cited as an advantage. In this respect, the Celera 500L is 30% ahead of the ICAO and FAA forward-looking requirements for aircraft entering service after 2031.

The ergonomics of the passenger cabin is called an important advantage over competitors. It has an increased height and allows passengers to walk upright. At the same time, the same number of seats is provided as on the most common "business jets", and there is also a reserve for the installation of additional equipment. 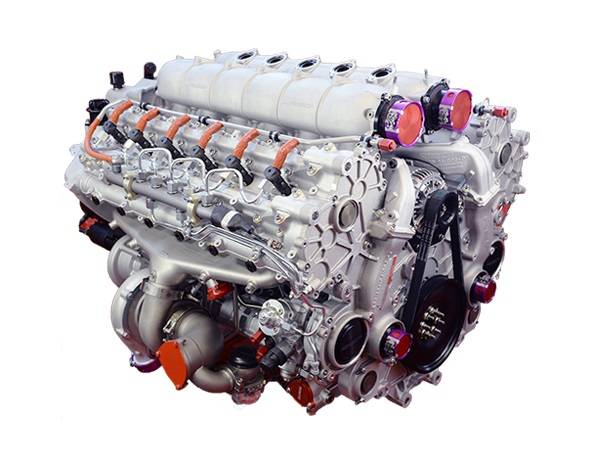 RED A03 engine
Thus, the Celera 500L will be able to carry a small number of passengers at the same speed as other aircraft, but over long distances. At the same time, it will be possible to reduce the cost of the flight and increase convenience. Such opportunities will be useful in the business aviation field, and can also become a new word in charter flights. In some cases, the new aircraft can become a real "air taxi".

To date, the development company has built and tested the first aircraft of a new type. Now it is necessary to carry out a number of new events of various kinds, according to the results of which the equipment will go into series and go into operation. All necessary work is planned to be completed by the middle of the decade.

Currently, the finalization and improvement of the design in the framework of Round A continues. In 2021, the “B” stage will begin. The finished aircraft will be presented for certification. In addition, Otto Aviation plans to find a site to build its own aircraft factory. After that, they will start accepting orders for serial equipment. 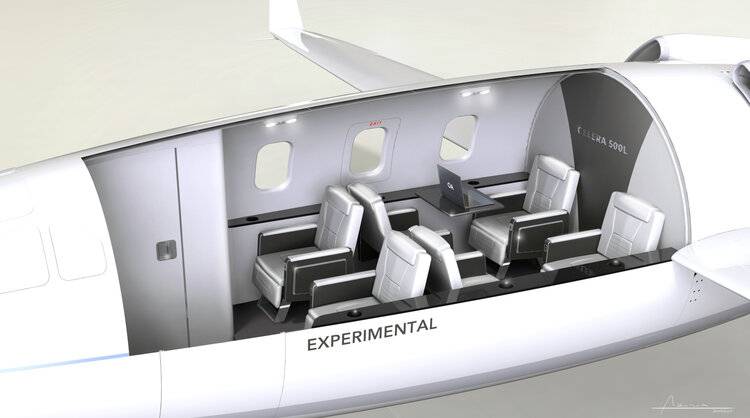 Cabin layout
For 2023-25 Phase C is scheduled for FAA certification, construction of the plant and commencement of aircraft production for customers. No later than 2025, the first Celera 500L will be handed over to customers.

The development of the next aircraft model has already begun, based on proven and proven technologies. The promising passenger Celera 1000L will be slightly larger and heavier than the existing model and due to this it will be able to carry more passengers over longer distances. The possibility of creating a modification of the aircraft with an electric power plant and an unmanned version is also being considered. However, the timing of the appearance of such projects has not yet been specified.

Otto Aviation Group plans to enter the passenger aircraft market and recapture a significant share of it. To increase her chances of commercial success, she did not copy other people's ideas, but carried out extensive research and development work and developed a promising appearance of the aircraft with a number of advantages over existing designs.

The company's approach to the development of new technology is curious. Much of the research and development work was carried out in secrecy. The project was officially presented only after the tests of the prototype aircraft, which confirmed the calculated characteristics. 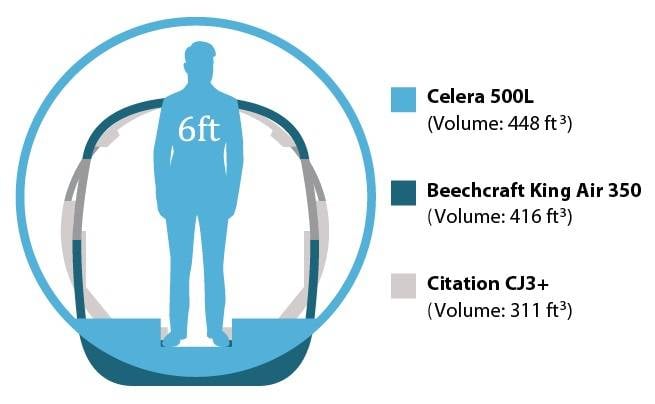 Celera 500L cab advantages
The technical novelty of the project provides significant technical and economic advantages over competitors. However, it also leads to various risks and can scare off potential customers. However, the plane successfully coped with the tests, which should influence the opinion of buyers.

According to the plans of the developer company, the Celera 500L project will go to series and operation for another 4-5 years. During this time, it is necessary to carry out a number of important activities, from fine-tuning and certification to the construction of the plant and the launch of production. In addition, the process of promoting a new development on the market has recently started. In general, Otto Aviation still has enough time to complete development, launch construction and attract customers.

What the future holds for a promising aircraft with an unusual flare is a big question. The declared characteristics are confirmed by tests and are of great interest. At the same time, concerns are raised by the high degree of novelty, as well as the lack of a production site. It is possible that the Celera 500L and derivatives of this project will eventually find their place in commercial transportation - but this will not happen until 2025. And only after that it will become clear whether there will be a revolution in air transportation.