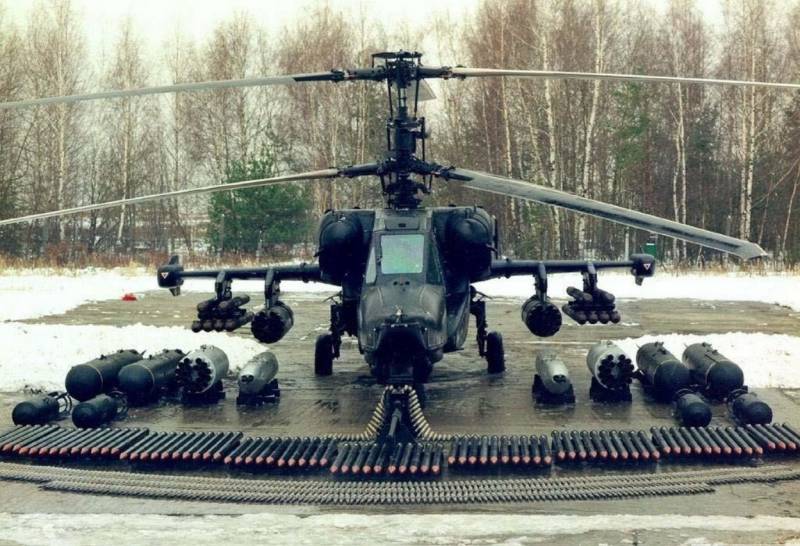 Tasks and problems of unification

Modern weapons are extremely expensive to develop, purchase and operate. Let us paraphrase Woland from the novel by M. A. Bulgakov "The Master and Margarita": the fact that the carriers of weapons (Tanks, airplanes, helicopters) the roads are still half the trouble, much worse is that the consumables and supplies - ammunition for almost all types of weapons - have become extremely expensive. One of the ways to reduce the cost per unit of production is to increase the volume of its output.

An increase in production volumes can be achieved both by complete unification of products for different markets / market segments, and by unification of individual manufactured components. An example is the automotive industry, where many different cars for different markets are built on a single platform, or the computer industry, where the components are strictly standardized and the consumer can assemble the configuration he needs from components from different manufacturers. (it is clear that in practice, compatibility does not always work, but nevertheless).

In part, this unification also exists in the field of ammunition. Within the same caliber of a rifle or cannon, cartridges / shells from different manufacturers can be used. In the field of missile weapons, everything is much more complicated. Anti-tank guided missiles, anti-aircraft guided missiles, and many types of unguided weapons produced by various manufacturers are almost completely incompatible with each other.

In principle, there are certain reasons for this: different design schools, the use of different control systems, etc. At the same time, the task of unification one way or another arises when it is necessary to integrate several weapons on one carrier.

For example, you can recall a complex the history of the creation and confrontation of the Ka-50/52 (M) and Mi-28A (N / NM) helicopters... Initially, the Ka-50/52 helicopters planned to use the Whirlwind anti-tank guided missiles (ATGM) developed by the Tula State Unitary Enterprise KBP, and the Mi-28 helicopter was supposed to use the Attack ATGM developed by the Kolomna Machine Building Bureau. Later in the process of modernization ATGM "Attack" was integrated into the Ka-52 helicopter. The promising Hermes ATGM is also likely to be installed on the Ka-52 (M) and Mi-28N (NM). 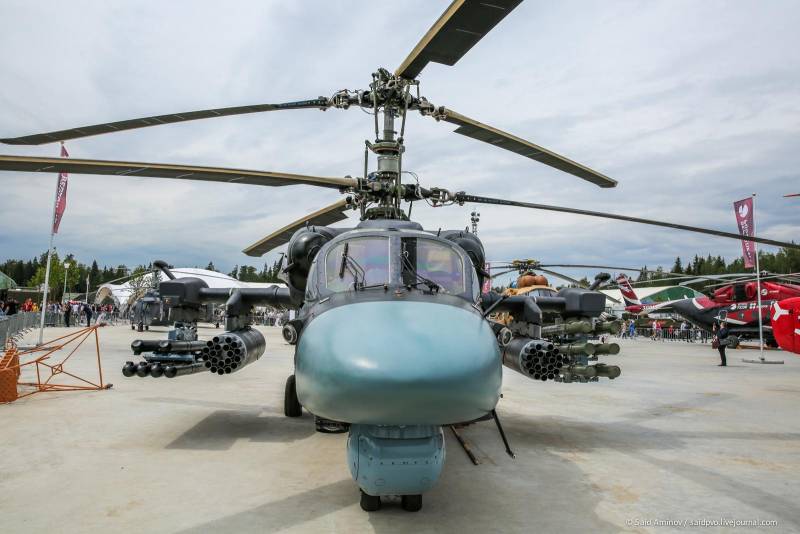 Combat helicopter Ka-52 simultaneously with ATGM "Whirlwind" (pictured on the left) and ATGM "Attack" (pictured on the right)
An important consequence of the introduction of standardization and unification is an increase in competition between different enterprises that can supply ammunition with similar parameters for any type or group of weapons. In this case, the customer gets the opportunity to choose: to buy one of the offered ammunition or to buy several types of ammunition in the optimal ratio. For example, one ammunition has the best characteristics, but is expensive, the other is simpler, but cheaper.

In other words, it does not have time to go into the series of ATGM "Whirlwind" - ATGM "Attack" is purchased. The "Attack" does not satisfy the military - the "Whirlwind" or the newest "Hermes" "matured", replaced the ammunition with them. It turns out that, regardless of the failures in the state defense order, combat helicopters are always armed with guided missiles.

Could it be possible to simplify the integration of ATGMs from different manufacturers into combat helicopters by introducing certain uniform requirements for this type of weapons? Of course, yes, the same ATGM "Attack" would be registered on the Ka-52 much easier and faster, and the ATGM "Whirlwind" could be included in the Mi-28N (NM) ammunition load. 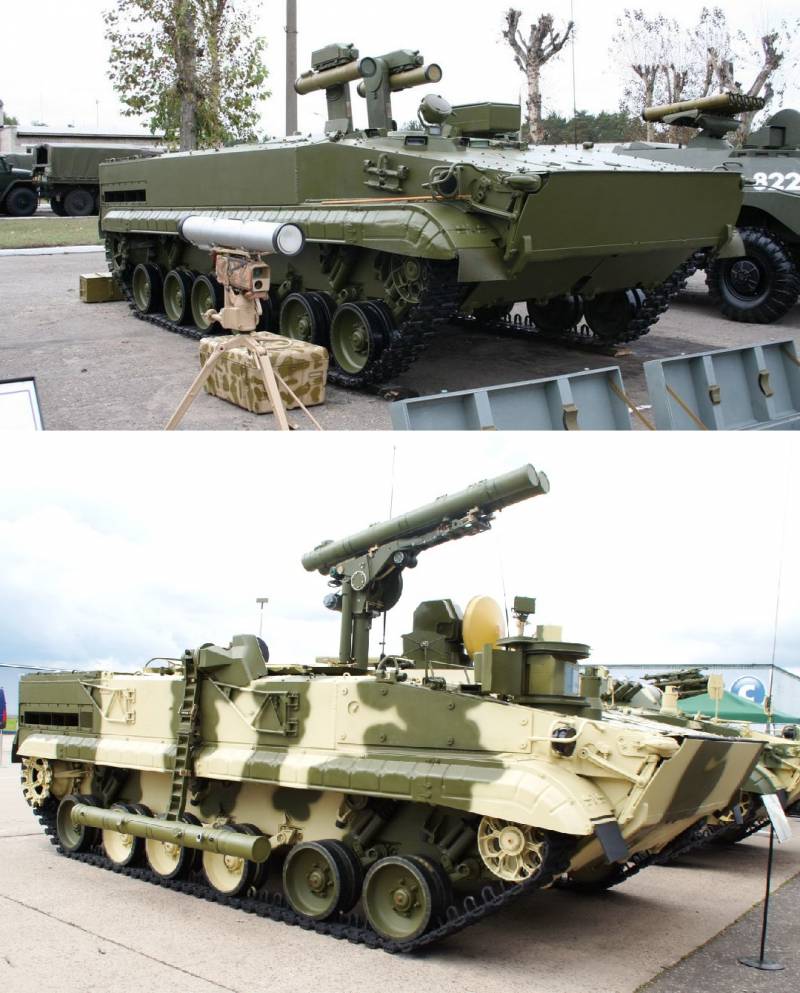 SPTRK "Kornet-T" (above) and SPTRK "Chrysanthemum" (below). Ammunition for them could well be partially unified.

It is even more difficult with short-range and short-range air defense systems. In the Tunguska anti-aircraft missile and cannon system (ZRPK), as well as in its conditional "successor" ZRPK "Pantsir" (ZRPK "Pantsir" is not quite a complete replacement for the ZRPK "Tunguska", since it refers to the object air defense, and not to the military ), radio command guidance is used, while in the Sosna air defense system there is laser guidance, the same "laser path", therefore, the unification of their ammunition can only be implemented in promising complexes with standardized requirements for guidance systems. 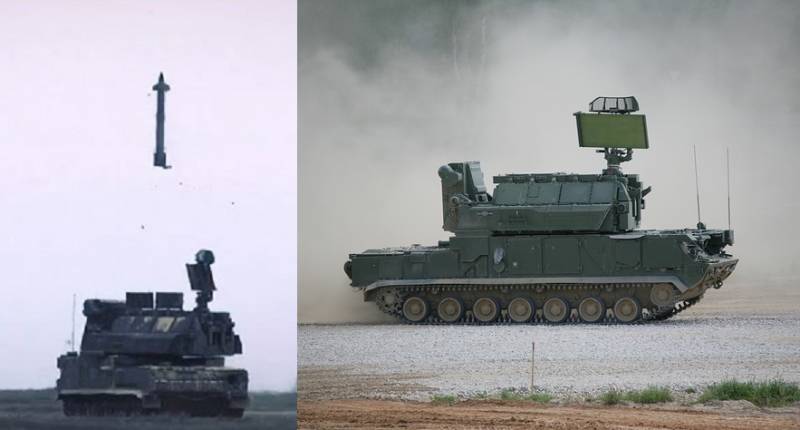 The concept of the TOR air defense system is very different from the concept of the Sosna air defense system, the Tunguska air defense system and the Pantsir air defense missile system, which makes the unification of their ammunition impossible
The unification of ammunition is most likely possible only within one, partially two generations of ammunition. Further, technology will go ahead and outdated standards will slow down the development of weapons. In some cases, the so-called backward compatibility is possible, when a new complex of weapons will be able to use obsolete ammunition, and the old complex will no longer have new ammunition. This situation often occurs in small arms weapons, when modern ammunition is forbidden to be used in outdated samples of the same caliber: they will simply burst from the increased pressure in new ammunition.

P08 Parabellum and Glock-17 pistols formally use the same 9x19 mm cartridge, but in fact the use of modern reinforced cartridges of this caliber in P08 Parabellum will lead to its destruction

The question arises: is unification necessary and possible between weapon systems performing different tasks on the battlefield, but within the same battlefield? For example, unification of ammunition between SPTRK, combat helicopters and air defense systems? And, according to the author, such unification may well be justified.

Let's abstract at the beginning from the technical side of the issue and talk about why the unification of ammunition for combat helicopters, SPTRK and SAM is needed.

For example, for ATGMs, by default, there is a task to destroy air targets. Sometimes the defeat of low-speed low-flying targets is carried out with standard ammunition, sometimes a specialized ammunition is developed for this purpose, in fact, an anti-aircraft guided missile (SAM), albeit with deliberately weak characteristics. In particular, there is a modification of the ATGM "Attack" 9M220O (9-A-2200) with a core warhead (CU) to destroy aircraft at a distance of up to 7 meters. 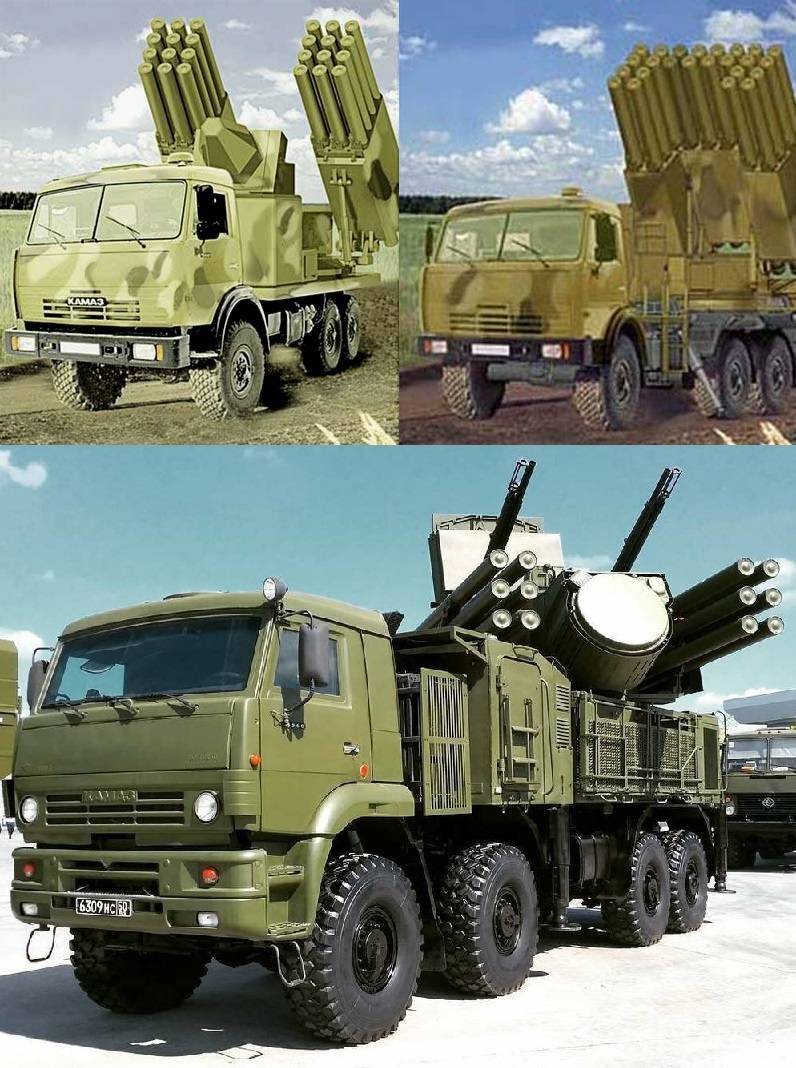 If missiles are created for the Hermes KUV with a range of about 70-100 km (as information periodically appears), then, in fact, this will turn it into an operational-tactical missile system (OTRK). And in the case of unification of missiles z-z KUV "Hermes" and missiles for ZRPK "Pantsir", the mentioned ZRPK is converted into OTRK.

Or consider the situation: our reconnaissance unmanned aerial vehicle (UAV) detected the enemy's OTRK, but in the area of ​​operation where our strike assets are not currently available (OTRK, aviation, or other complexes), but there is a ZRPK. You can't wait, the enemy's OTRK can strike or change position. In this case, if there is a ground-to-ground missile in the ammunition load, the Pantsir air defense missile system can easily destroy the enemy's OTRK. This interaction pattern can be considered quite natural for a network-centric battlefield.

Missiles "ship-to-ship" and "ship-to-land", included in the ammunition of the MRK project 22800 "Karakurt", will save expensive missiles of the "Caliber" complex when attacking secondary surface and ground targets
Why KUV "Hermes" or another SPTRK need missiles? First, the battlefield is currently being rapidly saturated with UAVs, which provide the enemy with intelligence information and issue target designations and can themselves be used for attack. By integrating SAMs into SPTRK, we reduce their dependence on military air defense systems and at the same time reduce the load on the air defense systems themselves, which may not be distracted by every little thing. 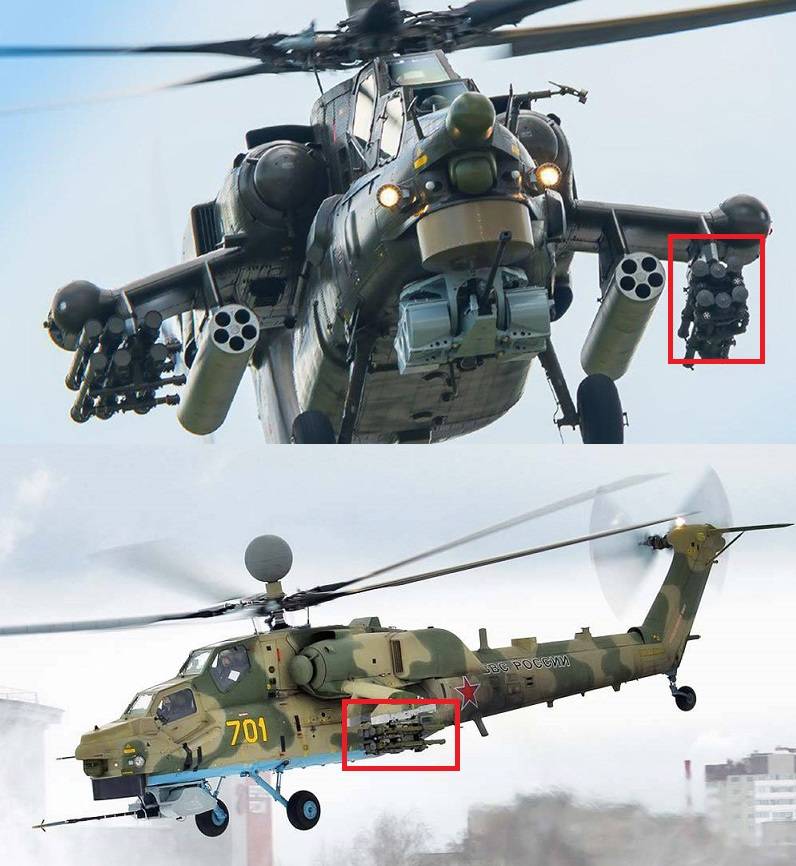 Igla-V missiles on Mi-28N (above) and Mi-28NM (below) helicopters
And, finally, in light of the emerging positive trend in the development of Russian UAVs, for small and medium-sized UAVs, unified ammunition of all types can become the basis of ammunition, the advantages of which will be maximum versatility and relative cheapness compared to other guided aviation munitions. 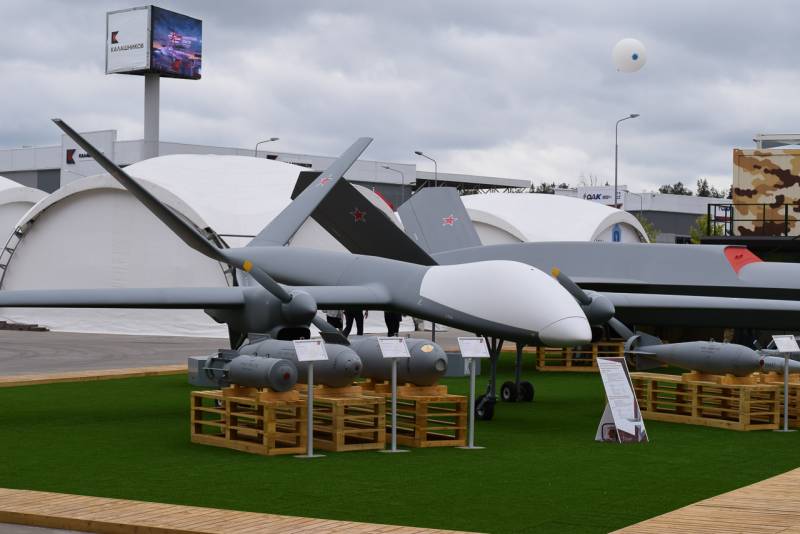 Mock-up of the Sirius twin-engine reconnaissance and strike UAV of long duration of flight, created by the Kronstadt Group, with samples of aviation weapons
It should be noted that the United States has long been using the AGM-114 Hellfire ATGM with UAVs: they have already had hundreds, and possibly thousands, of destroyed targets on their account. 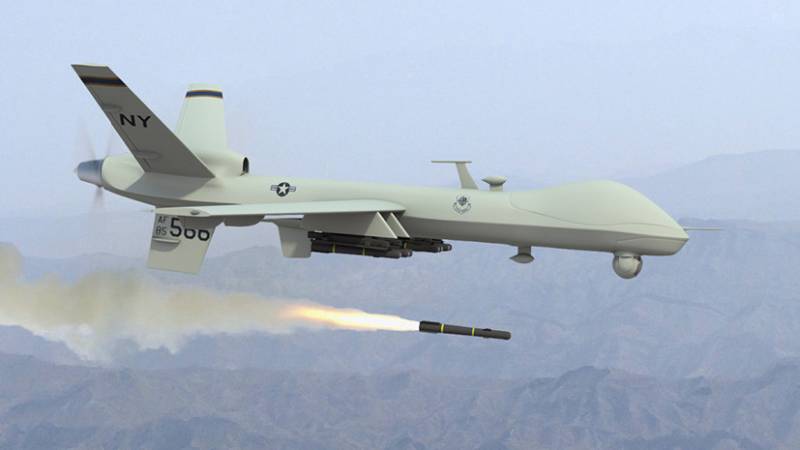 What should ammunition unification look like? Initially, this is the standardization of weight and size characteristics, connection interfaces and software in terms of the "ammunition-carrier" exchange protocols, as well as many other parameters.

Different enterprises have different sizes of ammunition, sometimes they differ slightly, sometimes quite significantly. For example, the diameter of the Kornet ATGM and the Chrysanthemum ATGM is 152 mm, while these ammunition differs significantly in length: 1200 mm for the Kornet ATGM versus 2040 mm for the Chrysanthemum ATGM. Even greater differences in size exist between the Sosna air defense missile system and the Pantsir air defense missile system.

Ammunition unification will require certain strong-willed decisions, which may not please all developers. However, in the long term, this approach will pay off. 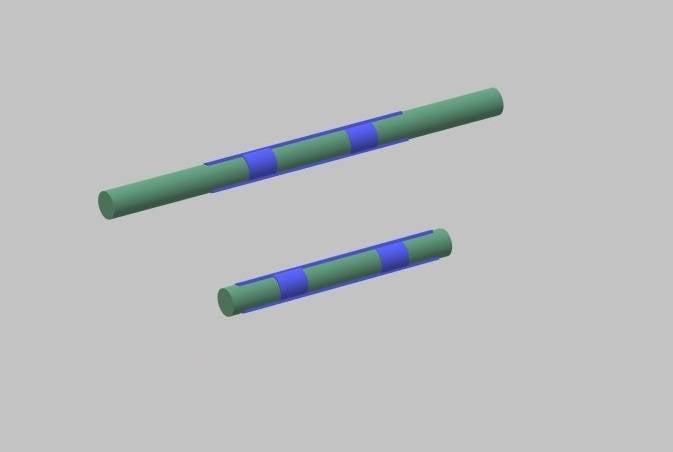 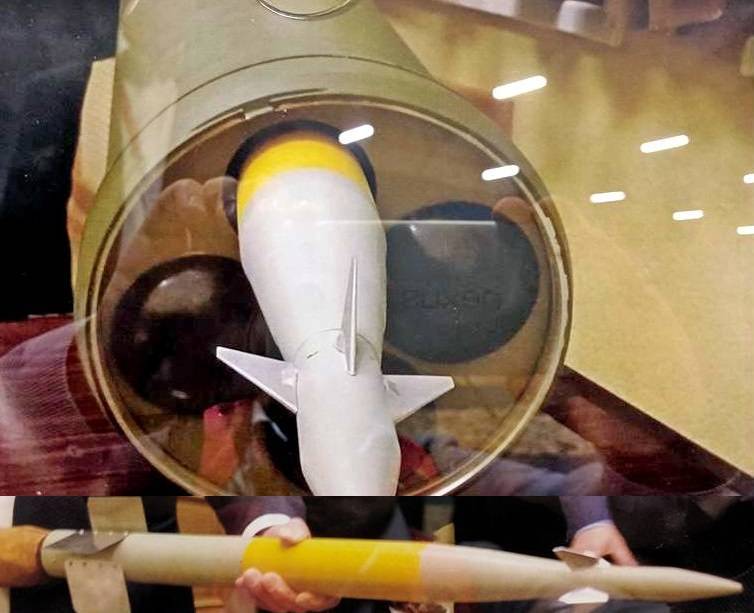 A package of four small-sized missiles in a container of a standard missile defense system ZRPK "Pantsir"
Of course, in addition to weight and size characteristics, physical and software connection interfaces, ammunition unification will require standardization and many other parameters.

The unification of ammunition will make it possible to involve a large number of Russian enterprises involved in the development of guided and unguided missile weapons in their development. In particular, these may be the following enterprises of the Russian military-industrial complex (MIC):
- JSC KBP, Tula;
- JSC NPK KBM, Kolomna, Moscow region;
- JSC "NPO SPLAV" them. A. N. Ganicheva ", Tula;
- JSC NPO Bazalt, Moscow;
- JSC "GosMKB" Vympel "them. I.I. Toropov ", Moscow;
- JSC "GosMKB" Raduga "them. AND I. Bereznyak ", Dubna, Moscow region.

It is possible that this list can be significantly expanded. It is important that potential developers have access to information on the requirements and standards for standardized ammunition. Equally, this information should be available to the developers of promising carriers - so that they can integrate standardized ammunition into their products.

In the next article, we will consider the types of control / guidance systems, as well as warheads for promising unified ammunition.

Author:
Andrey Mitrofanov
Photos used:
zvezda.org.ru, rg.ru, btvt.info.ru, tvzvezda.ru, kbptula.ru, nevskii-bastion.ru, forums.airbase.ru, bmpd.livejournal.com
Articles from this series:
Fire support tanks, BMPT "Terminator" and the cycle of OODA John Boyd
Armored vehicles against infantry. Who is faster: a tank or infantry?
Increased situational awareness of armored combat vehicle crews
A helicopter against the tank. Standoff more than half a century long
Russian military helicopters and their weapons. History, present and future
Great extinction. Why certain types of weapons may disappear?
Prospects for the development of ATGM: hypersound or homing?
Armament of promising tanks: cannon or missiles?

Ctrl Enter
Noticed oshЫbku Highlight text and press. Ctrl + Enter
We are
Is the "old" well forgotten to become the "new"? Part-2. At the call of honor and dutyAn-12 in Afghanistan
Military Reviewin Yandex News
Military Reviewin Google News
45 comments
Information
Dear reader, to leave comments on the publication, you must sign in.