Leaks in Ukraine's special services erode the foundations of the state 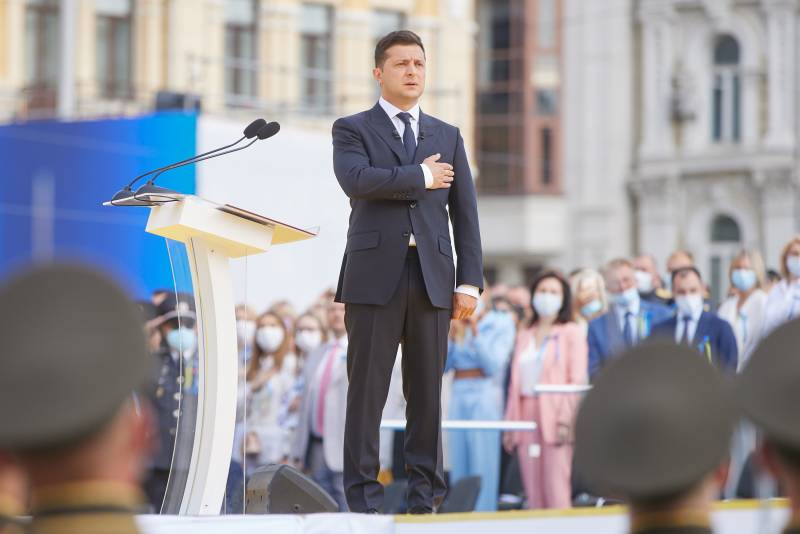 This material appeared in connection with the events that are taking place in Kiev. This is my perception of what is happening in the neighboring country. The usual logic, nothing more. Any reader can compare the facts and draw conclusions. This is my version of events and my predictions of their development.


Employees of the Ukrainian special services of several departments are in a panic. Counterintelligence is atrocious. Sudden interrogations, lie detector, searches and control of technical means of communication have become commonplace. And the reason for all this lies in the fact that information leaks have become impossible to hide.

The fact that information is leaking has been clear at the tactical level for a long time. It is enough to open the official Republican channel and listen to the summary News... By the way, this is exactly what smart activists do. Unlike the press service of the Armed Forces of Ukraine, they almost always report the dead enemy servicemen in a fairly full volume. Who, where, under what circumstances died.

But recent events, I mean the failure of the operation with the "Wagnerians" and the arrest of Russian smugglers who tried to kidnap the former militia from Moscow, have shown that it "flows" not only at the grassroots level, but also higher. It is no accident that Colonel-General Vasily Burba lost his post so quickly.

"On August 5, 2020, the commander of military unit 0515 Burba was dismissed from the position of unit commander in connection with the transfer to another job."
It would be more correct to write: the head of the Main Intelligence Directorate of the Ministry of Defense of Ukraine, Colonel-General Burba, was dismissed for service inconsistency.

The roof is leaking, cannot be repaired

On one of the closed resources on the Internet, I read a woefully ironic phrase from a user from Ukraine. They say that our intelligence is the only intelligence service in the world whose payroll is in the public domain on the Internet. It is clear that this is irony, a joke that only partially corresponds to reality. But in every joke ...

You do not need to be seven spans in the forehead in order not to understand the bitterness of this statement. The Ukrainian intelligence community is reasonably well prepared. Soviet developments have not yet been supplanted by American and European ones. Therefore, an employee cannot fail to understand that it is "exposed". You have to be very stupid and stubborn.

Few remember how on June 27, 2017, in the center of Kiev, the car of the commander of the special reserve of the Main Intelligence Directorate of the Ministry of Defense of Ukraine, Colonel Maxim Shapoval, was blown up. Then Shapoval's Mercedes was blown up so that the debris flew tens of meters around. Nothing fancy: a radio-controlled magnetic mine. Another detail is interesting: the value of this employee. He was posthumously awarded the rank of Major General and Hero of Ukraine.

But there was a continuation of this incident. A few hours later, a car with a group of SBU officers was blown up by a mine in the Konstantinovsky district. SBU Colonel Yuri Vozny died, three officers were wounded. And four days later they blew up another SBU colonel. In Mariupol, Alexander Kharaberyush was destroyed by a magnetic mine under a car.

I will not associate the death of Colonel Shapoval with the events of a year ago (before the assassination attempt). With the operation of the military intelligence of Ukraine on August 6-8, 2016 in Crimea. Ukraine for a long time convinced everyone, they say, I'm not me and not my horse. However, the published conversation between Poroshenko and Biden put everything in its place. Let me just remind you that the operation was developed precisely by the employees of the Special Reserve of the GUR of the Ministry of Defense of Ukraine.

The story about "accidents" that occur periodically can be continued. However, while these "accidents" do not cross the border of a gentleman's warning. However, this does not make it easier for the employees of the Ukrainian special services. Agree, it is quite difficult to work "under a microscope", not even trusting your comrades.

After the failure of the operation in Minsk, the understanding came that there are channels of information leakage not only in the special services, but also in state structures of the highest level. “Separatists-Wagnerians” is already geopolitics. This is not a fight with the LPNR or Russia, this is an operation of at least a European level. The "wave" was supposed to go to all European capitals.

Of course, it would be ideal to "find" a mole among the colonel majors. This is what the counterintelligence officers are doing now. Sacrificing one or two traitorous employees means ruining the image of the service, but saving its face.

Like, yes, there may be traitors among us. Not a single secret service in the world is immune from this. But we are fighting them and we will eliminate them in a timely manner ...

Only the counterintelligence of Ukraine is not playing solitaire. It doesn't add up for one simple reason. The executors are aware of the operation being carried out, as they say in the relevant orders, “in the part concerning them”. This is the basics of intelligence. This means that it was not the colonels who leaked the information, but the one who knew the full alignment. And this is a very serious level.

There is an understanding in Ukraine that it is impossible to directly blame the former head of the GUR Burbu for the leak. This would mean the recognition of the complete collapse of the entire intelligence service of the Ministry of Defense of Ukraine. However, one cannot blame any of his deputies who oversaw the operation.

A simple solution follows from this. The leak came not from the GUR, but from the office of the President of Ukraine. It is no secret that such an operation should have been authorized by the president of the country. And be aware of all the events too. Simply because after it was held, it was Zelensky who was to become the main prosecutor in the international arena, possibly at the UN level.

There is one more fact that fits perfectly into this logical chain. These are constant personnel changes in the highest echelons of power. Personnel leapfrog brings up more and more new faces. But that's not the point. The main thing is that together with these "new appointees" a lot of trusted persons from among technical assistants, advisers, secretaries and so on gain access to the state secret.

The most suitable figure for the appointment as "ass on duty" today is Andrey Ermak. According to some reports, Yermak was present at the report of the head of the Main Intelligence Directorate in March this year on the ongoing operation against the Wagnerians. Consequently, Ermak is familiar with operational information and with the essence of the operation as a whole.

And the "tail" of Andrei Yermak has long been squeezed in the grip of a criminal case six months ago. Let me remind you that in May the SBU filed a case no more and no less, as on charges of Andrei Yermak and Leonid Kuchma of high treason. It was then about the talks in Minsk. Let me remind you of the statement of the deputy from the "European Solidarity" Vladimir Vyatrovich:

“It is clear that the opening of proceedings on the case is just the first step. Because Zelensky, Yermak and the head of the SBU Bakanov are old friends and colleagues in the "block 95". One team, associates. And the decision to act in the interests of the aggressor state was clearly not taken by the participants in the Minsk talks ”.
In principle, if we proceed from the usual, formal, logic, then we should conclude: Ermak is a suitable figure to silence critics. We appoint him guilty, remove him from office and investigate the case for a long, long time. After a year or two, we will quietly close it. At the same time, Zelensky remains undetected and can sleep peacefully for some time. GUR and SBU become heroes who exposed the channel of leakage of state and military secrets.

Strange as it sounds, but the quality of the power steering of the Ministry of Defense of Ukraine is falling today. It would seem that hostilities, the opportunity to prove themselves in a combat situation, the constant rotation of personnel should give an opportunity to advance to sensible and talented people. However, there are no successes at the front, which means that most often those who have become "masters of provocations" or "writers" who know how to draw up a report on the operation carried out well are nominated. And the more blood, the better.

The main thing today is hatred of Russia. It is a launching pad for rapid career growth. And the methods by which this hatred is realized do not matter. The main thing is ranks, position in the military hierarchy, awards and positions. And in order to achieve all this, all means are good. Including a banal leak of information to the enemy.

For some unknown reason, the chief died. Accidentally blown up by a mine or was in the zone of fire of enemy mortars. War is like war. Anything happens. But after the death of the commander, his place was taken by a deputy ... Fantastic? Of course, fantastic! But the new commander must be congratulated ...

Ukraine has once again shown that the foundations of the state are being destroyed today. The very foundation on which the strength of the entire structure depends. In this regard, the special services are one of the most reliable indicators of the decay of power and the destruction of the state itself. There is a country, but the state is dying ... 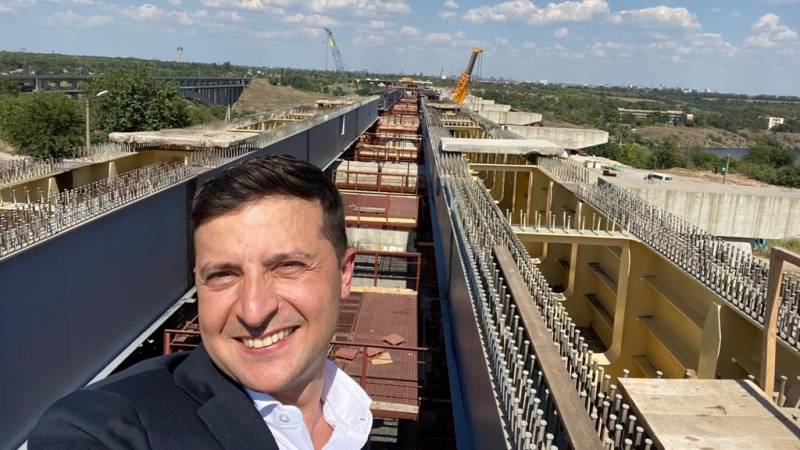 Ctrl Enter
Noticed oshЫbku Highlight text and press. Ctrl + Enter
We are
Situational analysis of the death of the MH17 flight (Malaysian Boeing 777), made on the basis of engineering analysis from 15.08.2014Bashar al-Assad: In Syria, not the “revolution” that the enemies are talking about, but the revolution of the army and the people against terrorists
49 comments
Information
Dear reader, to leave comments on the publication, you must to register.