Why the Vatican is guarded by Swiss guards 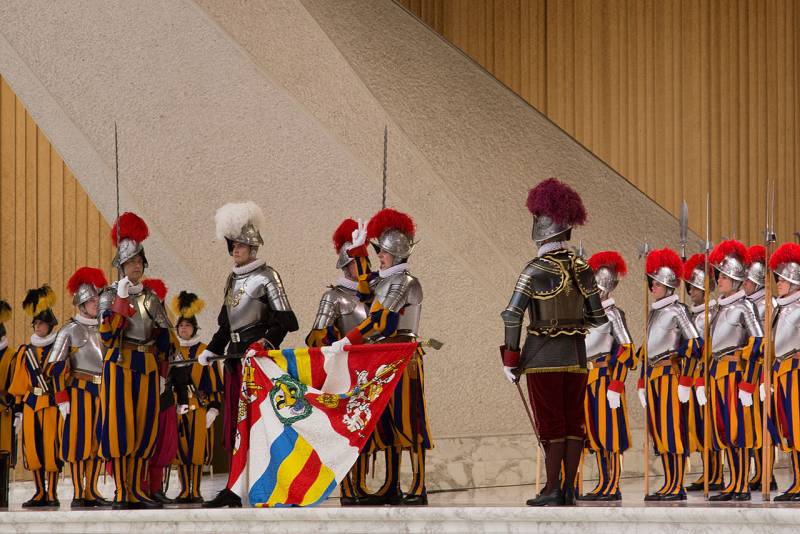 The Vatican is a dwarf state enclave in the territory of Rome. Today, the Vatican is the smallest of the officially recognized states on the planet. It is here that the seat of the highest spiritual leadership of the Roman Catholic Church is located. The Vatican has long been a place of religious pilgrimage for Catholics and tourists from all over the world who are happy to get acquainted with its sights. Despite its diminutive size, the Vatican has its own military, represented by the Swiss Guard.


Tourists often like to take pictures of the local Swiss Guards. Fortunately, they have long become the hallmark of the Vatican and are as popular as the British Royal Guards in their famous bear hats. The Vatican and the Pope personally are guarded by a little more than a hundred Swiss guards. Without their participation, one cannot imagine a single official ceremony in the Vatican. At the same time, many ordinary people are worried about the question: why were Swiss soldiers chosen to protect the pontiff?

Why the Vatican and the Pope are guarded by Swiss Guards

For more than five hundred years, the protection of the Vatican and the Pope has been carried out by the Swiss Guard, the full official name of which, translated from Latin, sounds like "The infantry cohort of the Swiss of the sacred guard of the Pope."

The Vatican Swiss Guard was formed in 1506. This fact rightfully allows us to consider the Swiss guard the oldest among all the armies in the world. She managed to survive until the XXI century.

The initiator of its creation was Pope Julius II, who, even though he was a well-known patron of art at the beginning of the 1503th century, throughout his papacy (1513-XNUMX) waged continuous wars. The same pontiff is considered one of the most warlike in stories dad. It is no coincidence that it was Julius II who needed his own loyal army, a personal guard, devoted to him and directly to the holy throne. In this case, the choice fell on the Swiss soldiers by no means accident. At that time, Swiss mercenaries had already served in many European countries and were rightfully considered one of the best soldiers on the entire continent. 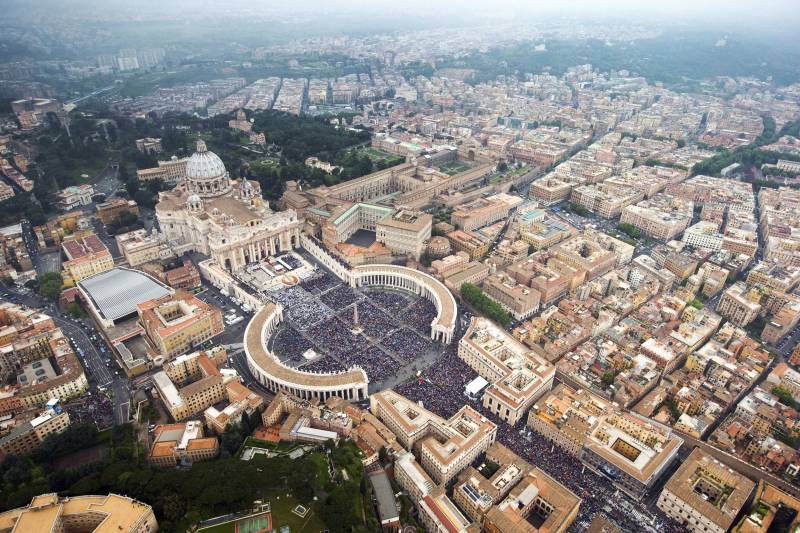 View of St. Peter's Cathedral and Vatican
The Swiss often became fighters of the personal guard of kings and emperors of many European states, and the Pope was no exception. In those years, Swiss soldiers were especially valued throughout Europe for their fearlessness, bravery, courage, but most importantly, their unlimited devotion to their employer. The Swiss rightly believed that such qualities as resilience and readiness to die for their employer were not stupidity, but an important competitive advantage in the market of "private military companies" of medieval Europe. They clearly adhered to the principle: those who can fully work out the customer's money without tarnishing the honor of the uniform will be paid more and more over time, unlike the hired rabble, who will scatter at the first signs of an impending disaster or failure on the battlefield. In those years, Switzerland largely lived on the money of mercenaries. It was still far from the construction of a modern banking system, so it was the Swiss soldiers that were the guarantor of replenishing the budgets of Swiss cities, cantons and families.

Considering all these facts, Pope Julius II turned to the inhabitants of the Swiss canton of Uri with a request to provide him with soldiers for the personal guard that was being created. Already on January 22, 1506, a group of 150 Swiss guards arrived at the Vatican, who became the first guards in the service of the Vatican. At the same time, a magnificent reception was arranged in honor of the soldiers who arrived, and they themselves were able to receive the blessing of the pontiff for service.

Did the Swiss Guards have to fight?

Throughout its more than 500-year history, the Swiss Guards have had to fight only once. This happened on May 6, 1527. On this day, Rome was captured by the troops of the Holy Roman Emperor Charles V. The Emperor's troops plundered the city and staged a massacre near St. Peter's Cathedral. This event went down in history as the "Pillage of Rome". At the same time, the city did not experience such destruction and plundering from the invasion of the barbarians. This event itself closed the era of the Renaissance papacy.

On May 6, 1527, there were only 189 Swiss guards in the Vatican. Despite all the hopelessness of the situation, they remained to guard Pope Clement VII. In the army that besieged Rome, there were about 20 thousand people, the defenders of the city were about 5 thousand. After the breakthrough of the troops attacking the walls of the city in an unequal battle on the steps of St. Peter's Cathedral, 147 guards were killed, but the survivors were able to provide protection for the pope, leading him through a secret underground passage to the Castle of Saint Angel. Behind the thick walls of the castle, the pontiff managed to wait out the siege. At the same time, the day of May 6 forever entered the history of the Vatican Swiss Guard. Since then, and for almost 500 years, it is on this day that the recruits of the guardsmen take the oath. 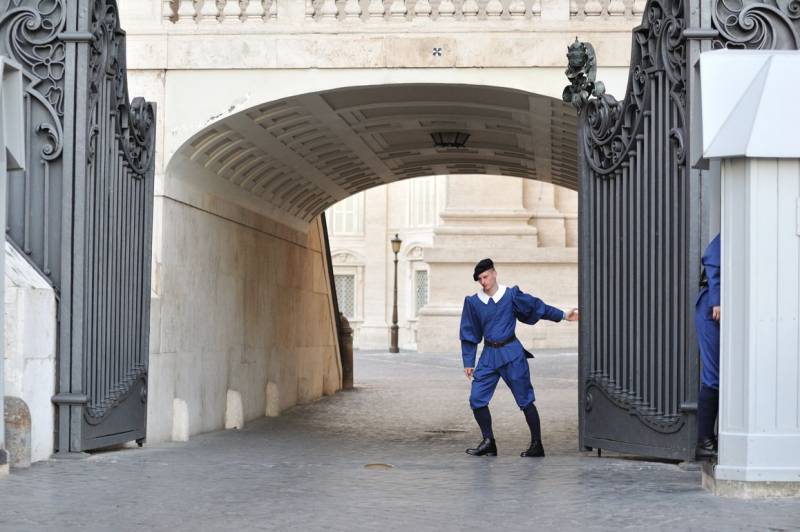 Once again, the guardsmen came close to engaging in battle during World War II when Nazi troops entered the city. The guards loyal to the Pope took up a perimeter defense and announced that they would not surrender the Vatican and would fight to the last drop of blood. The leadership of Hitler's Germany was not ready to spoil relations with the Roman Catholic Church, so the Wehrmacht command ordered the troops not to occupy the Vatican. Not a single German soldier entered the territory of the tiny state.

The current state of the Vatican's Swiss guard

Currently, the Swiss Guard is officially the only branch of the Vatican's armed forces. It's hard to believe, but not so long ago, back in 1970, there were four types of armed forces in the Vatican army: the noble guard, the palatine (palace) guard, the Swiss guard and the papal gendarmerie. After the reform of the armed forces of the tiny country, which was carried out in 1970 by Pope Paul VI, only the Swiss guard was left to protect the state. In 2002, Pope John Paul II re-established the gendarmerie, but it is no longer part of the Vatican's armed forces, performing exclusively police functions.

The staffing table of the Swiss Guard is 135 people, but at the moment there are a little more than a hundred guardsmen in service. As before, only male volunteers with Swiss citizenship are selected for service. This tradition has remained unshakable for over five hundred years. The following number of requirements are imposed on the Swiss Guards: age from 19 to 30 years old, height not less than 174 cm. Belonging to the Roman Catholic Church is mandatory, in addition, only bachelors are accepted into the ranks of the guard. They can get married while already in the service and by special permission, while their chosen one must also adhere to the Catholic religion.

Today, concessions have been made for the guards in terms of marriage. They can get married after five years of service, regardless of their rank and position. Previously, only officers, non-commissioned officers and sergeants could do this - and only after ten years of service. Easing these conditions helped improve the staffing situation in the Vatican's Swiss guard. 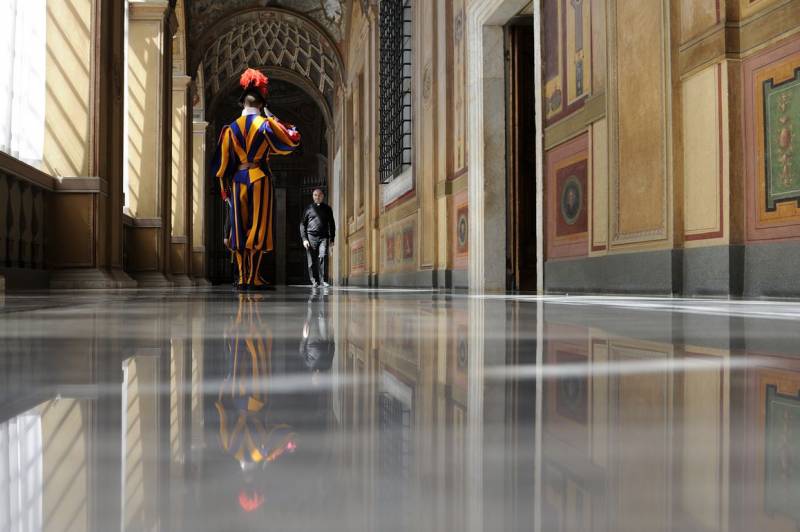 Other requirements for the guards include the mandatory presence of at least secondary or secondary specialized education. In this case, all applicants must undergo military training in the Swiss army (at least four months) and have positive characteristics from the secular and spiritual authorities. All applicants for the position of the Guardsman must have an impeccable reputation. The official language of the Vatican Swiss Guard remains German.

For five hundred years, the guards have served at the chambers of the Pope and Secretary of State and at all the entrances to the Vatican. They are directly involved in solemn masses, ceremonies and receptions. Guardsmen are also known for their full dress uniform - traditional striped red-blue-yellow camisoles. On solemn occasions, they put on cuirasses and stand guard with halberds and swords. At the same time, one should not think that the Swiss guards cannot handle modern weapons... All of them have the necessary level of military training and in case of danger they are ready to defend the Pope not with a halberd, but with quite modern small arms. Currently, the guards are armed with SIG Sauer P220 and Glock 19 pistols, Heckler & Koch MP5A3 and MP7A1 submachine guns, and SIG SG 550 and SG 552 assault rifles.