Quarrel with allies. US Attempt to Extend UN Sanctions Against Iran 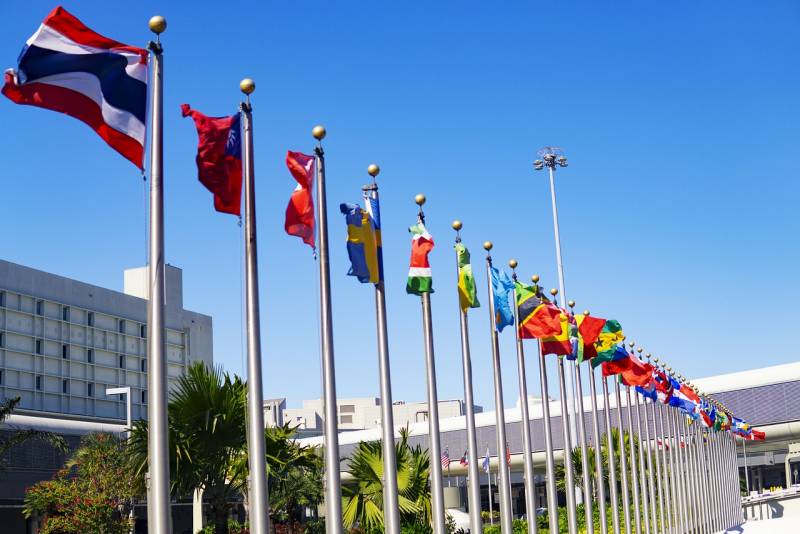 The Americans in their diplomatic battles around Iran are suffering defeat after defeat. However, on the diplomatic fronts, the United States has not been "rushing" lately - which is only the "successes" in the field of strategic stability, for example, on START-3 or with the DPRK, in relations with the EU and European NATO. Or with Iran. A couple of weeks ago, American diplomacy suffered a rather serious, albeit expected by many, defeat. The Americans put up a draft anti-Iranian resolution for a vote in the UN Security Council - and lost. And now they are reaping the benefits. Although, by and large, the consequences here will be for many.

With regard to Iran, as we know, the weapons the embargo established by UN Security Council Resolution 2231 of 2015, the one that was approved by the then-associated Iran, all five permanent members of the UN Security Council, as well as the EU "Joint Comprehensive Plan of Action on the Iranian Nuclear Program" (JCPOA). The plan is in effect until the fall of 2020. The document prohibits the supply of military aircraft and helicopters to Iran, tanks, warships and submarines and military missiles with a radius of up to 300 km.

The Americans, seeing that the UN Security Council sanctions were coming to an end, first tried to push through the Security Council a resolution with an even tougher sanctions regime, up to a complete ban on the supply of any military or dual-use products to Iran. But even in a behind-the-scenes discussion, he announced that there would be a veto on such a resolution, and it would be multiple: not only Russia and China would vote “no,” but even the US allies - Britain and France. Then the Americans redrawn their document and simply offered to extend the current sanctions regime under the pretext that Iran, they say, does not comply with the JCPOA. And they ended up in almost complete diplomatic isolation. Only the representative of the USA, Kelly Kraft, and the representative of such an "important" world power as the Dominican Republic, voted "for".

The resolution was, as expected, vetoed by the Russian Federation and the PRC, which, as friends and allies, act in the UN Security Council from agreed positions almost always, and always in matters of the Middle East. And all other countries, including Britain and France, abstained. Moreover, among the non-permanent members of the UN Security Council (which do not have "veto" rights) there were not only countries that had a rather negative attitude towards the United States or positively towards Iran, such as Vietnam or Indonesia with South Africa, but there were also Germany and Belgium, and even Estonia dared not support your master! And even small Saint Vincent and the Grenadines, which most of them will not find on the map. This, of course, was a slap in the face to Mr. Pompeo, who considers himself a tough diplomat, and, in general, the American line towards Iran.

Not everything is so simple, or About the benefits of laid straw

Well, Iran will soon be able to turn to Russia and China for the weapons it needs? No matter how it is! Everything is much more complicated. The fact is that at one time, when the JCPOA was adopted, another regime of sanctions was in effect, and for an indefinite period, "until Iran fulfilled the conditions" of other UN Security Council resolutions, Nos. 1696 and 1737 of 2006, 1747 (2007), 1803 and 1835 from 2008, 1929 (2010). They were accepted, as we see, quite a few, in view of the real and imaginary sins of Iran in the field of the nuclear program, which has long turned into a scarecrow for Europeans, and not only for them.

If Iran really wanted to acquire nuclear weapons, it would have acquired it long ago over all these years, and no one would have stopped it. Strongly the DPRK stopped sanctions, prevented the creation of nuclear and thermonuclear (or tritium-boosted, semi-fusion - opinions differ on this) charges, ICBMs and SLBMs? Has Iran been brought to its knees by sanctions, has the defense industry destroyed it? No way. Moreover, Russia, being, at least in words, an active supporter of nuclear non-proliferation, actively voted for these resolutions or abstained, and so did China. Well, our relations with Iran then were much more complicated than the current ones, "welded", for example, with Syria. Once again, because of them, it was rash to spoil relations with the West then, we were not ready for confrontation.

In general, the adoption of the JCPOA and Resolution No. 2231 ended these old sanctions. But then the Americans managed to spread straws. They pushed through a provision stating that any participant in the JCPOA can declare a significant non-fulfillment of someone's obligations under the JCPOA (by the way, Iran can also, in theory), and then within a month the UN Security Council is obliged to vote on a resolution on this issue and on termination of the provisions proposed either by this applicant, or by another country, or by the chairman of the Security Council. What should the United States do in this case? Correctly - to veto any of this draft, the resolution is torpedoed, the old international sanctions are being returned in full. Sly? Yes, quite. The Americans are now likely to follow this path and move. Moreover, they have no more evidence of Iran's failure to fulfill its obligations than the British about stories with the "Novichok" or the United States itself in the history of alleged interference in the elections. The Americans themselves admit that they did not succeed in catching the Iranians in violation, but why do they need it when there is a universal "highlighted like"? Declare that you are sure that they are violating, and then just sink the resolution!

How to carve yourself and not understand anything

But there are pitfalls here too. The fact is that any Estonia cannot declare that the Iranians have not fulfilled their obligations, this must be done by the countries participating in the JCPOA. But the United States withdrew from the JCPOA in 2018, announcing Tehran's "non-fulfillment" of obligations. In many ways, the decision was made at the suggestion of Israel, with its fake evidence, which Netanyahu then spoke with, with his "filing cabinet" looking only slightly more convincing than Poroshenko the clown with a piece of the bus. But in Trump's own family, the pro-Israel lobby is very strong. Then the United States hoped that their unilateral sanctions and various actions of the special services and military threats would be enough for the regime to sway and collapse. Probably, Trump was promised such a "blitzkrieg" by his wise aides and intelligence officers. But Tehran didn’t give a damn about the military threats, simultaneously "dunking" the United States with the shooting down of an expensive and heavy UAV, and in the story with the shelling of bases in Iraq. The "Maidan" in Iran also did not work out, and the economy did not collapse either, although the United States managed to inflict some damage on Iran.

As a result, the United States now has no right to use the mechanism that it left to itself as a backup. There is also an option to force some of the participants specified in the JCPOA to declare that Iran has failed to fulfill its obligations. But who? Russia or China? It's funny! France or the EU? It is excluded, given Trump's difficult relations with NATO allies and the fact that it is the French and Germans who decide everything in the EU, and the Germans have recently been further angered by the Americans with the withdrawal of some of the US troops from Germany. Well, not Iran! There remains London, but even there they are not eager to dance to Washington's tune on this issue.

But the problem is that the United States itself believes that since they are indicated in Resolution 2231 as participants and initiators of the plan, they still retain the right, despite their withdrawal from the JCPOA. Kindergarten - pants with straps, not an approach to diplomacy. And this was pointed out to them in the UN Security Council. All this can give rise to an interesting collision: the United States in general can decide, breaking away from reality completely, that the sanctions of the resolutions 2006-2010. work again, and everyone else decides not. Or at least the Russian Federation and the PRC will decide so - that's enough. The United States will try to punish with its unilateral sanctions the "violators" of what no longer exists, receive some other sanctions in return, and so on. In general, the legal mechanism of the UN Security Council can go haywire.

What can the Iranians need?

By the way, what of the banned for the supply of weapons to Iran (for example, it can receive air defense weapons now, like many other things) does it really need and from where exactly? It is unlikely that Iran needs missiles - there are enough of its own, although they would be interested in some technologies, but not all of them will be sold to them even without UN sanctions. Although, of course, the Iranians have no Iskander-E-level systems, no one has them, and there may be interest here. Iranians are also interested in our tanks (or, in extreme cases, Chinese ones), such as the T-90MS, for example. Yes, the Iranians have developed their "analogue", the "Carrar" tank and the upgrade package to its level of the existing T-72S. But the difference between "Carrar" and T-90MS is about the same as between a real brand and a fake from the market.

But most of all they need planes, engines for them, air-to-air missiles and helicopters, especially combat ones. Iran can do a lot on its own (or with some help from outside): ballistic missiles, small submarines and boats, corvettes, UAVs, etc. But modern aircraft engines are too tough for them, and the planes themselves, and helicopters too. All Iranian designs in this area are alterations of their existing and mastered obsolete samples. Therefore, their interest in Su-30SME, Su-35, MiG-35 or Mi-28NE helicopters is quite understandable. Or to the Chinese JF-17 and J-10. And the interest of the United States, Israel and Saudi Arabia, which do not want Tehran to have a modern and powerful aviation, is understandable too. In the EU, too, apparently, there are some hopes to sell the Iranians something, for example, submarines from France or Germany.

We will soon find out what will come of it, but for now, the Iranian delegation led by the country's defense minister is extremely active at the Army 2020 forum. Apparently they are looking after what to buy. Will it succeed? But we will definitely succeed in anti-aircraft missile air defense systems, radio-technical air defense troops, and so on, and Iran is buying this from us very actively. Maybe some details about deals in this area will come up soon.

Ctrl Enter
Noticed oshЫbku Highlight text and press. Ctrl + Enter
We are
Situational analysis of the death of the MH17 flight (Malaysian Boeing 777), made on the basis of engineering analysis from 15.08.2014Strangulation: the context, conduct and consequences of the American naval blockade of China
19 comments
Information
Dear reader, to leave comments on the publication, you must to register.