Combat ships. Why is it so with the ideal, monsieur? 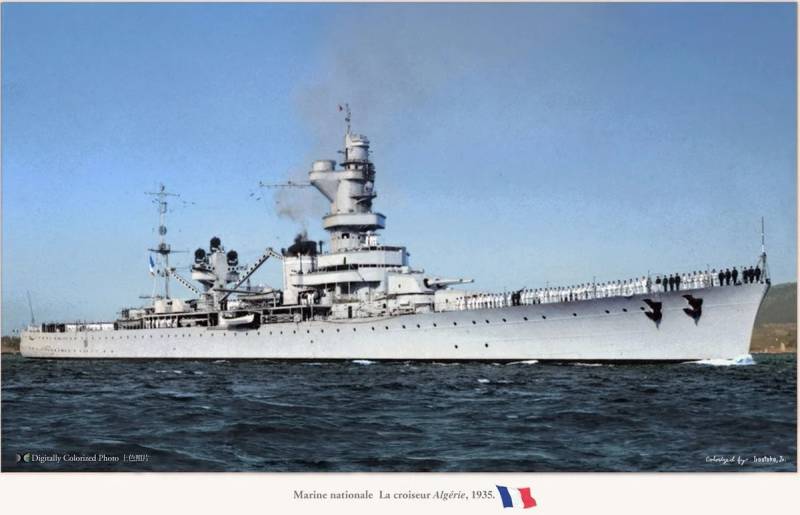 May the regular readers of the column forgive me for jumping so unceremoniously from the criticized German light troughs for some reason to the French heavy cruisers. Yes, in theory, "Hippers" should go now, but here - "Algeri". And this is no accident. At the very end there will be an answer to the question why this is so. But everything is fair.


So, after the end of the First World War, France found itself in a secondary role, in the regional powers strangled by the London Agreement and the Washington Treaty. The only rival with whom it was possible to fight for supremacy on the seas (more precisely, in the Mediterranean Sea) was Italy.

Already at that time it became clear that in the Mediterranean water area we were not talking about battleships at all, these sledgehammers would be used as a last resort, and all work, both in peacetime and in wartime, would lie on the decks of cruisers and destroyers.

Cruisers ... Well, with them both the French and the Italians were so-so. The Italian "Trento" and "Trieste" were still scrap metal, although the same could be said about the "Duquesne" and "Suffren" of the French.

The Italians made the first move, laying down the Zaras. These were not the best ships, but they were head and shoulders above everything previously done.

The most interesting thing is that, according to the London agreement, France and Italy could each have 7 heavy cruisers. And the French had 6 !!! And the Italians laid as many as 4 new Zaras, which obviously nobody liked in France.

Even if the Italians did not build good ships (and they did, albeit with reservations), the four new heavy cruisers are a serious claim to superiority. For a new cruiser is a new cruiser in the Mediterranean pool.

It was necessary not only to answer, but quickly and efficiently. And I want to say that the French did not just succeed. And it turned out just great.

In general, the project of the new cruiser was initially very serious, especially in terms of booking. Against the background of the "cardboard" "Suffrens" the ship looked like an armored monster from pre-war times.

All vertical armor had to withstand a 155 mm projectile hit from 15 km, and horizontal - from 20 km. The anti-torpedo protection was charged with the responsibility to save the ship from being hit by a torpedo with a warhead of 300 kg of explosives.

Well, the appearance was also very modern. The name was in honor of the 100th anniversary of the establishment of a French protectorate over Algeria, which coincided with the year of the foundation. 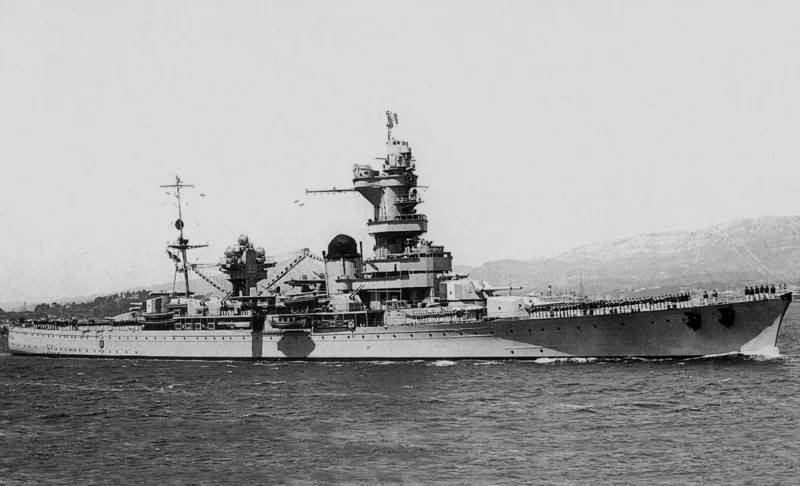 Yes, the fate is more than short, but let's not rush, but consider it simply and impartially - like a warship. 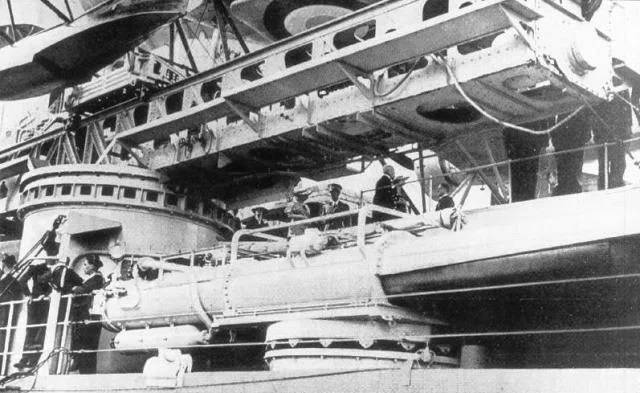 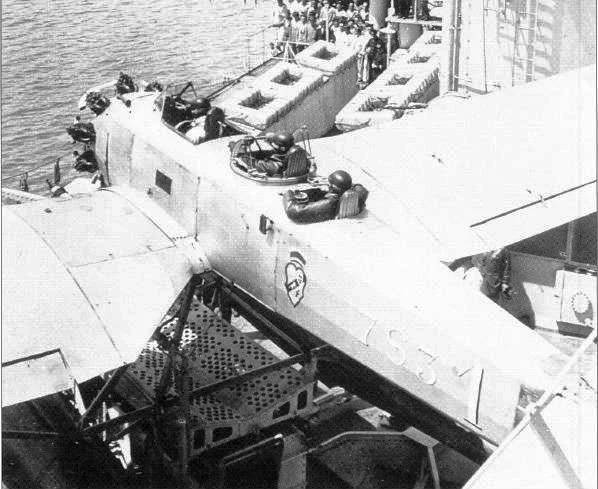 In general, a very strong set. Yes, the Italians put power plants under 100 hp on their heavy cruisers, but this added speed, but not critical. The armor was much better than that of the Zara, the universal artillery was twice as strong, the main caliber ... With the main caliber it was generally separate история... Considering that it was not necessary to check in battle during the war, theoretically speaking, I would not bet on the Italians, who sent their 203-mm shells towards the enemy throughout the war and nothing more.

With the beginning of the war, "Algeria" managed to go through a number of modernizations and improvements, and, it should be noted, they were all on the case. This is not typical for the French military department, which is simply mired in a mess.

At the beginning of 1940, all single-barreled 37-mm anti-aircraft guns were replaced with twin installations of the same caliber. The number of trunks has doubled. 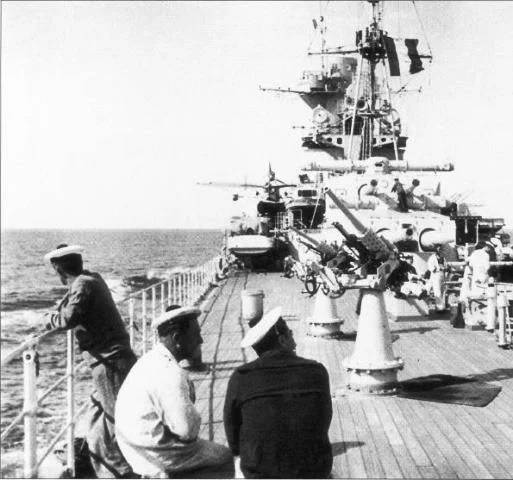 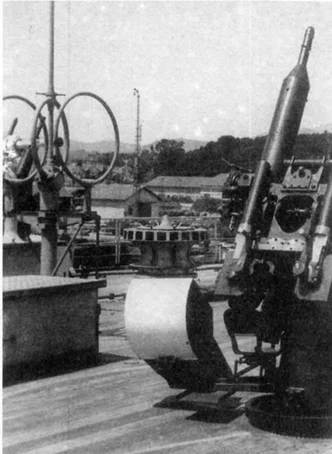 In 1942, four more 13,2-mm Browning were installed. And most importantly, a DEM radar with a wavelength of 2 m was installed at the same time.

The universal caliber was luxurious. The 100-mm M1930 guns were really head and shoulders above their Italian counterparts, and the appearance of these guns on French ships was a great success. The guns could fire both at surface targets and at flying targets. Anti-aircraft high-explosive shells flew to an altitude of 10 km, semi-armor-piercing shells were fired at a range of up to 15 km.

The real rate of fire was 6-7 rounds per minute.

The main caliber is the 203-mm guns of the 1931 model. They did not differ much from the guns of the 1924 model with which the heavy cruisers of the early buildings were armed, but they were very good guns. 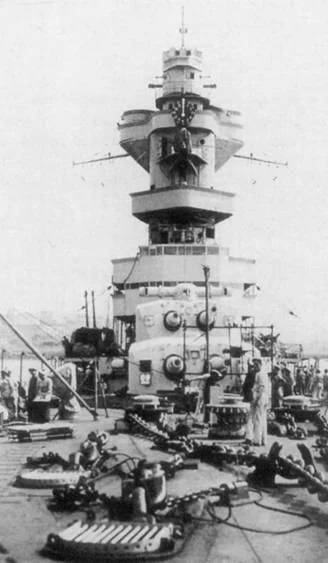 The gun had three types of shells. High-explosive weight 123,8 kg, armor-piercing weight 123,1 kg. The gun could send these shells to a range of 31,4 km. And there was also a reinforced armor-piercing projectile weighing 134 kg, which flew a shorter distance (30 km), but could do serious things.

All the turrets of the main caliber bore their own names. The first bow - "Alzhe", in honor of the capital, the second bow - "Oran", the first stern - "Kara Mustafa", the second stern - "Constantine".

On paper, in numbers, it turned out to be a very serious ship. With a good move, good armor protection, weapons. The weak point was definitely the air defense, but this was typical for many fleets at the beginning of the war. 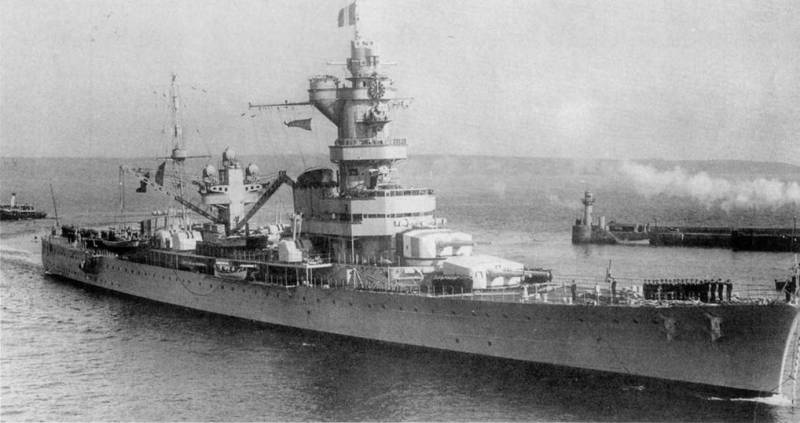 "Algeria" became part of the 1st light division, where almost all heavy cruisers of the French fleet.

When the Second World War broke out, "Algeria" was included in the composition of "X", which hunted (without much success) on German raiders in the Atlantic. In 1940, the cruiser was engaged in escorting especially important convoys, transported part of France's gold reserves (almost 60 tons of gold) to Canada.

Unfortunately, the ship took part in only one real combat campaign. This happened after Italy declared war on France. On June 14, 1940, the cruiser fired at targets on the coast near Genoa. And on June 22, France had already surrendered by signing the Compiegne Agreement.

As one of the newest ships, the Algeria remained in the Vichy fleet, which was turned into the High Seas Fleet. The ship made its only combat campaign in November 1940, after which the fleet's combat activities were practically stopped. 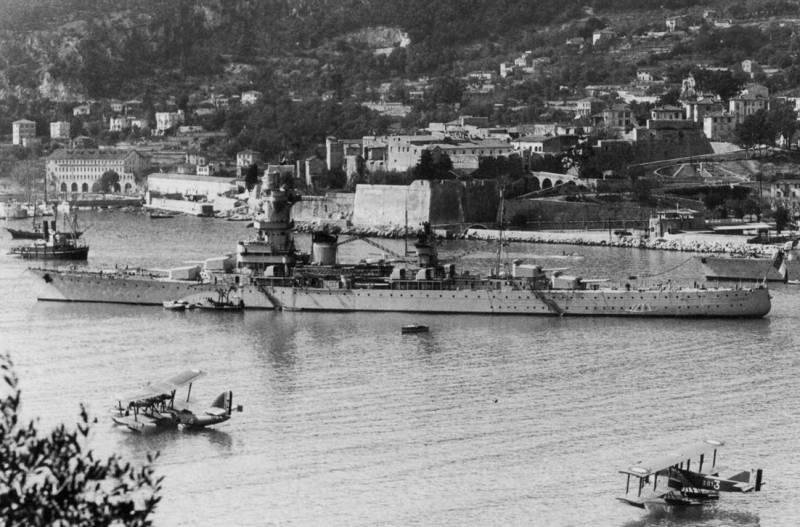 Then there was the Toulon tragedy. On November 11, 1942, German troops launched Operation Anton - the occupation of Vichy territory. At the same time, the implementation of Operation Leela began, according to which the Germans decided to take over the French fleet.

German Tanks appeared on the outskirts of Toulon on the morning of November 27, 1942. Almost the entire French fleet was in the harbor. Only a few ships and submarines left for the breakthrough to Casablanca, since no one delayed or tried to stop. The rest heroically drowned themselves in the Toulon raid.

"Algeria" was actually unlucky, its crew was too responsible about the destruction of the ship, blowing it up in several places, opening the kingstones and setting fires. The cruiser landed in the harbor and burned for almost three weeks, turning into a pile of bare, charred metal. Nobody rushed to extinguish it, and so it happened to destroy the cruiser. 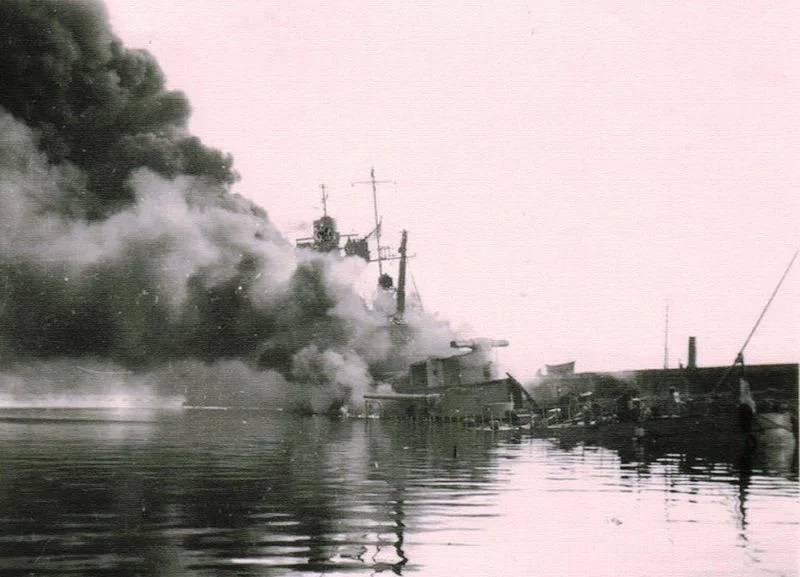 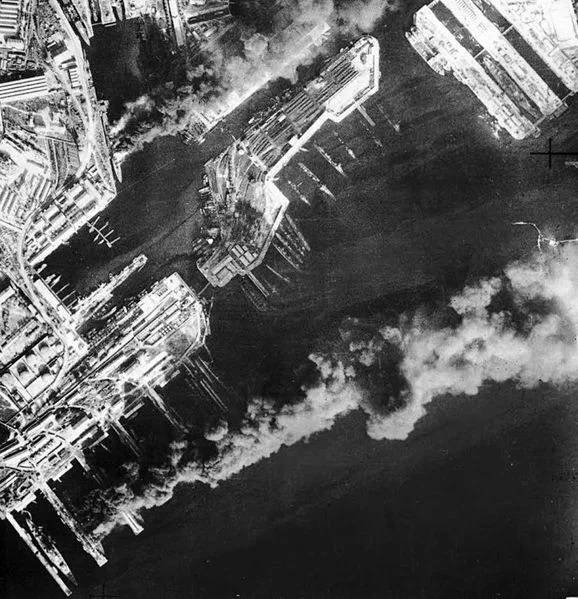 Since Toulon fell into the zone of Italian occupation, the relevant services of the Italian fleet tried to do something with the ship, but could not raise it. That was the end of it. 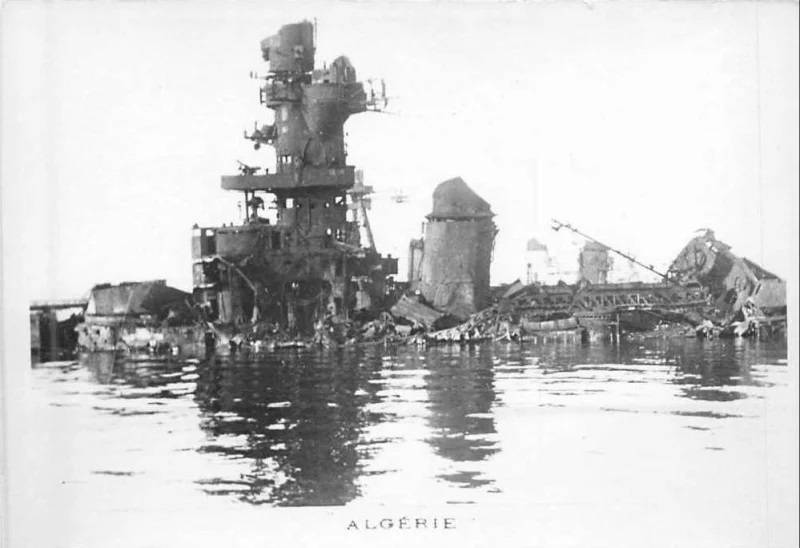 The remains of the ship were recovered only in 1949, and by 1956 nothing remained of the Ajir.

In general, a very sad story, because the weaker cruisers quite successfully fought the entire war.

"Algeria" can really be considered one of the best heavy cruisers in the world of the post-Washington period. It was very well balanced. Decent anti-torpedo protection, good armor, effective main battery artillery, excellent versatile weapons in sufficient quantity to solve many problems. 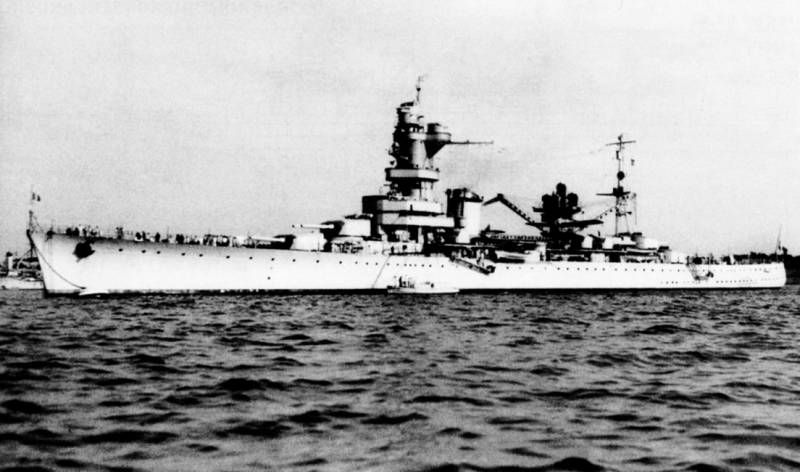 Some experts believe that in aggregate, the Algeria was superior to many ships of its time, such as the Pensacola, Zara, Admiral Hipper and Takao.

To be honest, everything is fair on this list, although Takao was perhaps the stronger. She surpassed the "Algeria" in speed and range, which was not critical for a French cruiser operating in the Mediterranean, and the Japanese ship possessed a stronger air defense. And the French cruiser had a radar at the beginning of the war, which made life much easier.

If it were not for the excessive zeal of the crew, who could have just gone to Algeria or Morocco on a cruiser with a decent speed and continued the war there ... But it turned out as it was.

Finally, why did the Algeria go ahead of the German heavy cruisers of the Admiral Hipper class? It's simple. The Germans, after the start of the revival, the Kriegsmarine needed heavy cruisers. This is normal. But there were simply no projects alive and well. And Hitler needed ships yesterday.

Fortunately for Germany, there were Admiral Canaris and his "Abwehr", which had many competent scouts and naval specialists. A huge amount of work has been done to extract information of a classified nature and analyze this information.

And this work showed that Algeria should be taken as a role model. Which the Germans did. See how similar the general idea of ​​the ship is. And between the laying of the ships, no less than six years passed.

But "Admiral Hipper" and "Prince Eugen" fought the entire Second World War, but their prototype did not work out. It happens. Therefore, we note the excellent work of the French to create a heavy cruiser, which can be called, if not ideal, then close to ideal. But the main attention will be paid to German ships, whose life was, although not longer than that of the hero of our story, but much more meaningful.

Ctrl Enter
Noticed oshЫbku Highlight text and press. Ctrl + Enter
We are
The cruisers of the 68 bis project: the Sverdlov missions in the post-war fleet of the USSR. 3 part"Svetlana". History of creation
Military Reviewin Yandex News
Military Reviewin Google News
107 comments
Information
Dear reader, to leave comments on the publication, you must sign in.