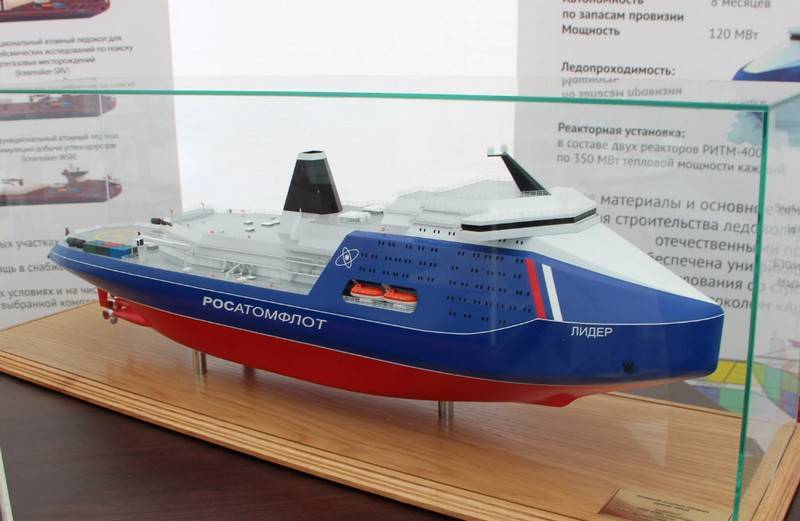 The official laying of the head nuclear icebreaker "Russia" of project 10510 "Leader" will take place on September 28, the Day of the worker of the nuclear industry of Russia. This is stated in the official publication of the Russian nuclear industry "Strana Rosatom".


The laying of the nuclear-powered icebreaker Rossiya will take place at the Zvezda shipbuilding complex in Bolshoy Kamen, Primorsky Krai. The event will be timed to coincide with the 75th anniversary of the national nuclear industry.

The nuclear-powered icebreaker Rossiya will be laid down on XNUMX September. It will become the first-born of a new generation of nuclear powered ships of the Leader project
- leads RIA News message.

Note that the ceremony of cutting steel for the icebreaker took place on July 6 this year in the Zvezda hull production unit.

The contract for the construction of the lead nuclear icebreaker, named "Russia", was signed between the shipbuilding complex "Zvezda" and FSUE "Atomflot" on April 23, 2020. The state customer of the icebreaker is the State Atomic Energy Corporation Rosatom. The first icebreaker of Project 10510 will enter service in 2027. In total, it is planned to build three icebreakers of the new project.

Ctrl Enter
Noticed oshЫbku Highlight text and press. Ctrl + Enter
We are
The construction of the lead icebreaker of project 10510 Leader has begun at SSK ZvezdaLaid the keel of the first Soviet-era icebreaker with a capacity of 25 megawatts
Military Reviewin Yandex News
Military Reviewin Google News
90 comments
Information
Dear reader, to leave comments on the publication, you must to register.