The version became widespread after the Battle of Tsushima and is based on personal observations of participants from the Russian side. In the second article Cyclewe will consider the objective characteristics of Russian and Japanese shells, as well as pre-war knowledge about the effectiveness of the latest high-explosive shells filled with high explosives.

I draw the readers' attention to the fact that I will only compare the "key" types of naval artillery shells (armor-piercing and high-explosive) used in the Russo-Japanese War. The main characteristics according to E.V. Polomoshnov's data are given in the table below:

Russian shells were lighter in weight due to the transition in 1892 to the concept of "light shell - high muzzle velocity". For the time of adoption, this concept had several indisputable advantages: better accuracy and armor penetration at expected combat distances (up to 2 miles), savings in the weight and cost of projectiles, and a decrease in barrel wear. But according to the results of the Russo-Japanese War, one could confidently say that this concept was outdated due to the increase in the actual battle distance.

A comparative graph of armor penetration according to R.M.Melnikov's data is shown below (solid line - Russian shells, dotted line - Japanese):

Some superiority of Russian shells at short distances is due precisely to their lighter weight.

Now let's take a closer look at shells. Let's start with the Japanese ones. The Japanese 12 "projectile had a mass of 385,6 kg, but depending on the type it differed in the length and content of the explosive. According to EV Polomoshnov (unfortunately, other authors have some differences), the armor-piercing projectile had 19,28 kg ( 5%), high-explosive - 36,6 kg (9,5%) shimosa. The explosives were in a case covered with aluminum foil, which, in turn, was placed in silk bags or waxed paper. The inner walls of the projectile were varnished. Both types of ammunition The use of an instant tube and very sensitive explosives in armor-piercing shells actually meant that the Japanese were unable to effectively hit parts of the ship protected by armor, since the shells exploded when passing through the armor. This was due to the technical lag of Japan. , which did not have the opportunity to develop an effective shock tube with deceleration and explosives capable of avoiding detonation when a shell passes through armor.

The Russian 12 "projectile had a mass of 331,7 kg, the armor-piercing one was loaded with 4,3 kg (1,3%), the high-explosive one - 6 kg (1,8%) of explosives. Such an extremely low weight of explosives in domestic shells was due to the fact that in order to save money, a decision was made to produce them at state-owned factories that could not master the production of high-strength steel (and this would greatly increase the price of the projectile!), and the quality was compensated for by the quantity, that is, by thickening the walls of the shells. and short, with a small chamber for explosives. 6 "and larger ammunition were loaded with pyroxylin and Brink shock tubes with delayed action, but for the 2nd Pacific squadron, due to the lack of pyroxylin 12", the shells had smokeless powder and Baranovsky instant shock tubes. The "armor-piercing" shock tubes in the high-explosive shells were explained by the presence of thick walls and a small charge, which made the instant tube irrelevant. inside a nickel-plated brass case that protected it from contact with steel. The small amount of explosives and the use of delayed-action shock tubes in high-explosive shells actually meant that such shells were not high-explosive in their action. 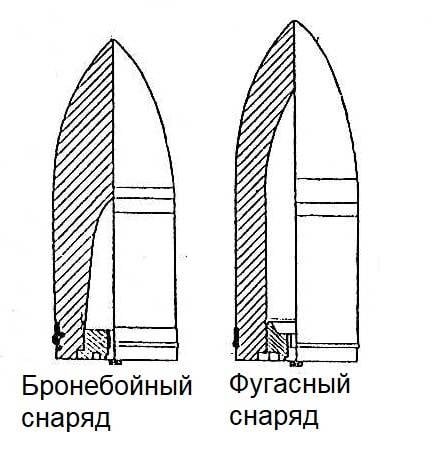 An intermediate result can be summed up: the Japanese fleet had powerful high-explosive shells, but did not have full-fledged armor-piercing shells. The Russian fleet had full-fledged armor-piercing shells, but did not have shells with a powerful high-explosive effect. Certain unpleasant features of the shells, and on both sides, manifested themselves already during the war, but I will write about this in the next article.

And now we will understand the explosives with which the ammunition was equipped, since several common misconceptions are associated with them at once. Historically, shells were filled with black powder, but at the very end of the XNUMXth century, powerful explosives became widespread: pyroxylin and a whole family made on the basis of picric acid (trinitrophenol): liddite, melinite, shimose, etc. In terms of explosiveness (the volume of gases released during an explosion) and blasting (the ability to crush a projectile into fragments), the new explosives were many times superior to black powder, but created additional difficulties associated with the risk of spontaneous detonation.

Secondly, picric acid-based explosives needed to be reliably isolated from the steel hull, otherwise picrates were formed - extremely sensitive salts of picric acid that could cause spontaneous detonation of the projectile.

Soon after the Russo-Japanese War, tragic explosions of the cellars on the ships "Mikasa" and "Matsushima" occurred, presumably associated with the spontaneous detonation of shells. Therefore, there was a transition to the next generation explosives, which are safer to use: TNT or mixtures of trinitrophenol with other explosives.

Unfortunately, due to known limitations, even reference information on explosives is now difficult to obtain. Therefore, the following comparative characteristics of explosives for ammunition of that time were collected from various sources.

Immediately, I note that shimose, liddite and melinitis are complete analogues in their characteristics and correspond to trinitrophenol in the table. The information that shimosa contained aluminum is not supported by reliable sources.

Based on the physicochemical properties, it can be noted that pyroxylin is even slightly superior to shimose in explosiveness and explosion power. But due to the brisance shimosa creates a noticeably larger number of fragments, and due to a slightly higher density, a slightly larger weight of shimosa will fit in the same volume.

As for smokeless powder, its properties practically corresponded to pyroxylin (by 91-95% it was pyroxylin, the rest was moisture, as well as the remains of alcohol and ether, which impart plasticity), but at a lower density of the substance.

Powerful high-explosive shells filled with explosives based on picric acid were still little tested before the Russo-Japanese War. Therefore, in order to understand their capabilities and role in the upcoming battle, information about the experiments with the shooting of the outdated battleship Belile, carried out by the British in 1900, is very valuable.

Reservation scheme of the battleship "Belaille": 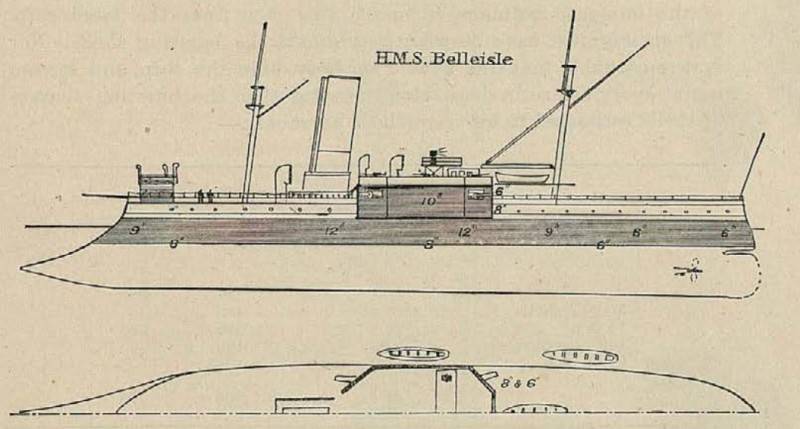 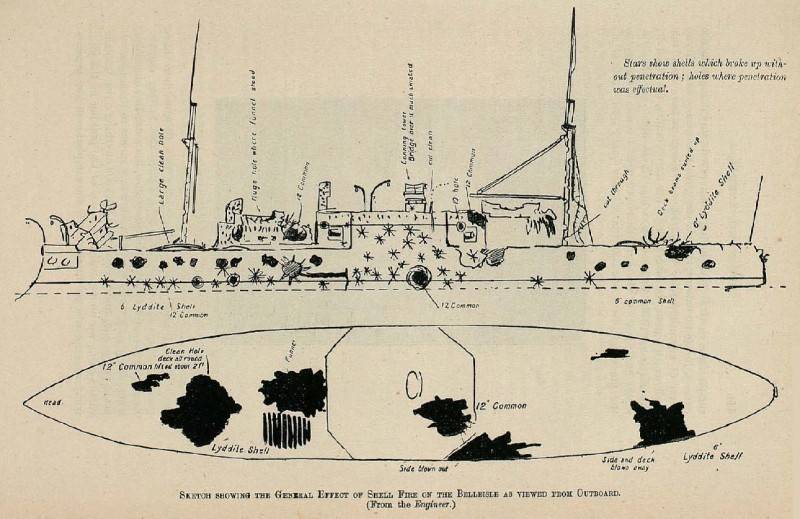 On Belayle, the armor covered the entire length of the waterline and the casemate. During shelling, the armor was pierced by two 12 "shells (casemate and just below the waterline). Most of the 6" shells hitting the armor did not cause any damage; only one shell pierced the casemate, and another sheet was loosened with the occurrence of a leak by successive hits of several shells. The guns in the casemate remained intact, but a 12 "shell and several small ones that flew into the embrasures destroyed all the sights and dummies of the people inside. The armored deck was not pierced.

The unarmored parts of the ship were simply riddled with explosions of high-explosive 6 ", 76-mm and 47-mm shells. The difference between the effect of powder filling of 6" shells and liddite was very large. But no fires broke out on the ship, although the combustible materials (decoration, furniture, bedding) remained in place. 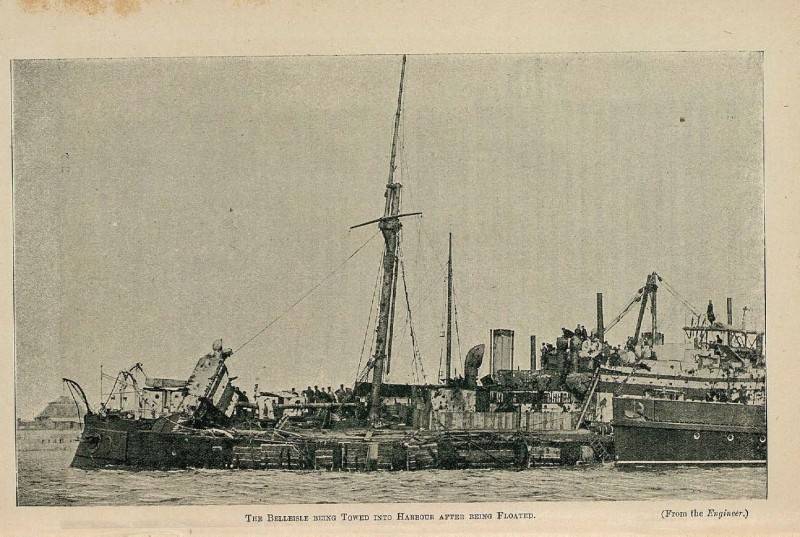 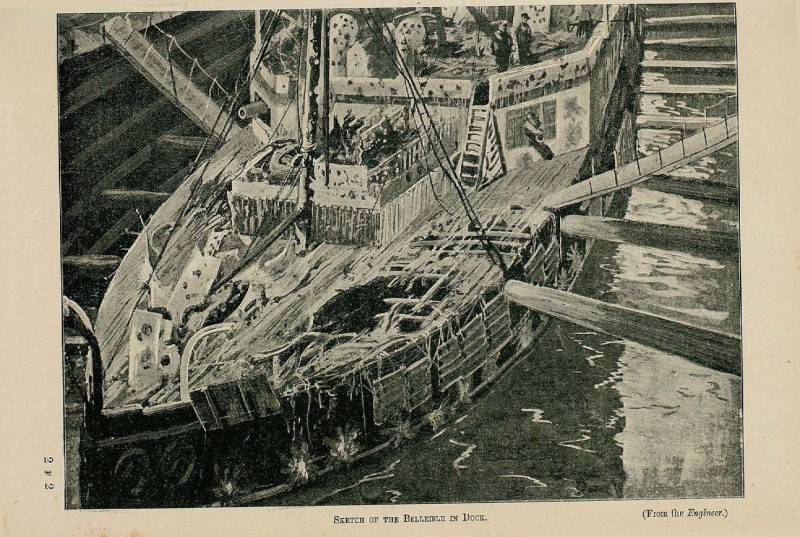 2. Unarmored parts of the ship are very vulnerable to fire from rapid-fire guns.

4. Even a large number of hits by high-explosive shells does not lead to the sinking of the ship.

5. A ship that has undergone intensive shelling with high-explosive shells is practically defenseless against destroyers due to artillery damage.

Without a doubt, Togo was familiar with the results of these experiments and, taking them into account, built his tactics in the Battle of Tsushima: subject enemy ships to a massive impact of high-explosive shells and then destroy them with torpedoes.

The Russian admirals, most likely, were also aware of these experiments, since their results were presented in open sources: the Times newspaper and the Inzhener magazine. Indirectly, this is evidenced by the fact that Vice Admiral ZP Rozhestvensky (and our other admirals) considered torpedoes from destroyers, and not shells from enemy battleships, to be the main threat to armored ships.