The name of the "Aydar" subdivision in Ukraine became honorary 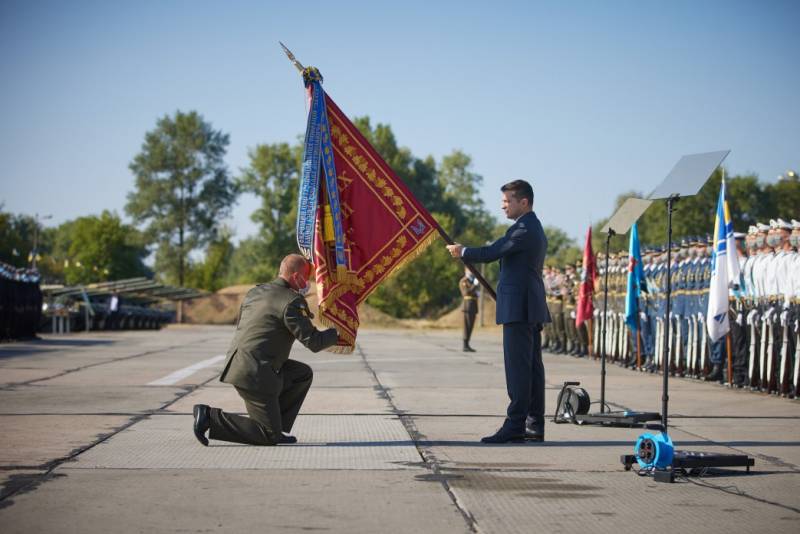 President of Ukraine Volodymyr Zelenskyy has assigned honorary titles to several units of the Armed Forces of Ukraine and the National Guard. The corresponding decrees are published on the official website of the president.


The fourth operational brigade of the National Guard was awarded an honorary title, giving it the name of Sergeant Sergeant Mikhalchuk, Hero of Ukraine. On March 25, 2020, Zelensky awarded Sergeant Mikhalchuk this title posthumously. A year before that, he died in the Donbass. It is alleged that during the explosion, he covered a colleague with himself.

The "leader of the country" presented battle banners and ribbons to them to the leadership of several combat units. Among them was the 24th separate assault battalion of the 53rd separate mechanized brigade of the operational command "Vostok" of the Armed Forces of Ukraine, which received the "honorary" name "Aydar". Actually, the unit, formed in 2014 from the self-defense activists of the Maidan and the militants of the "Right Sector" banned in Russia, had this name from the very beginning. He is well known in Donbass after the war crimes and numerous human rights violations committed by the Aidar militants (an extremist group banned in the Russian Federation).

In this regard, we have to state the continuation of the flirtation of the Ukrainian president with radicals.

Volodymyr Zelensky's presentation of regalia and awards to the commanders of units of the Armed Forces of Ukraine and the National Guard was timed to coincide with the Day of the State Flag of Ukraine, which the country celebrated on August 23.