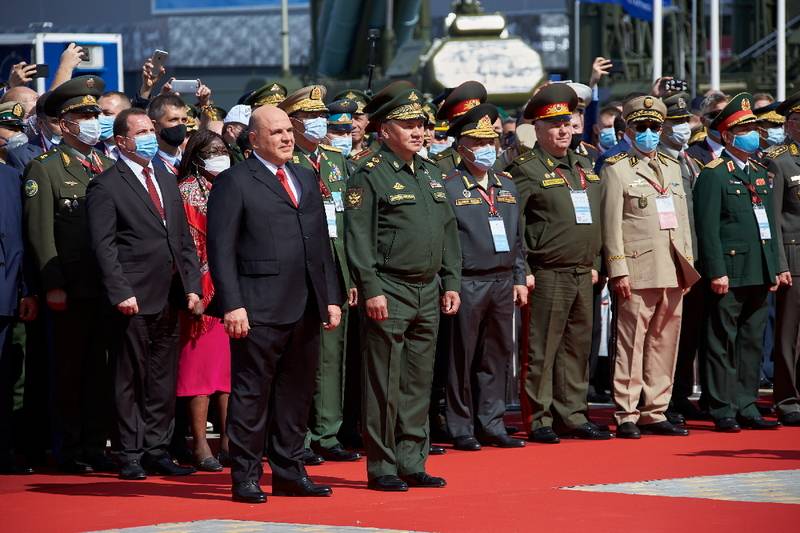 On August 23, 2020, the Army-2020 international military-technical forum opened at the Patriot Convention and Exhibition Center in the Moscow Region. For several days the forum will work behind closed doors only for specialists, and only on August 27 it will open its doors to the general public.


As reported, on August 24, a four-hour broadcast of the Army Online project will take place, during which enterprises will present their developments both to the head enterprises and to representatives of the Russian military department - up to the level of deputy defense ministers.

In the meantime, let's summarize the results of the first day of the forum and designate news, which for one reason or another were not announced by us.

So, within the framework of the Army-2020 forum, the press service of the Remdizel company reported that the serial production of the protected K-4386 Typhoon-VDV vehicle and deliveries to the troops may begin this year after the end of state tests, although earlier serial production was only planned for next year.

The Ministry of Defense and the Kronstadt company signed a contract for the serial delivery of the Orion drone. At the moment, this is the only large-sized UAV of domestic production that has passed the first stage of state tests.

In addition, the company "Kronstadt" for the first time presented a promising unmanned aerial vehicle "Helios", intended for radar surveillance and guidance. The contract for it was not signed, but the UAV aroused great interest of the Aerospace Forces and the Russian Navy.

In the closed part of the exposition, the Su-57 multipurpose fighter of the fifth generation, the upgraded Mi-28NM attack helicopter and the promising Okhotnik heavy attack drone were shown. In the open area - the Altius unmanned aerial vehicle, Su-35S and MiG-35 fighters, as well as the newest Ka-52K Katran carrier-based helicopter.

Director General of the Research Center "Resonance" Ivan Nazarenko announced the deployment of the fourth "Resonance" radar station in the Arctic by December this year. The station allows detecting and issuing target designation for aerodynamic air targets at a distance of up to 600 km, for ballistic targets - up to 1200 km. At the same time, it detects targets at altitudes up to 100 km. The station can simultaneously track up to 500 targets.

The head of Rosoboronexport, Alexander Mikheev, announced the interest of foreign customers in the Russian Su-35 fighter. The planned deliveries of the aircraft abroad may cost up to $ 7 billion.

The head of the Ministry of Industry and Trade of the Russian Federation Denis Manturov said that the conclusion of contracts for the serial production of the S-500 Prometey air defense system is planned for this year. The complex undergoing tests confirms its characteristics. So far, it is planned to purchase five sets of S-500 until 2025.

Russia will deliver the first regimental set of S-400 air defense systems to India by the end of 2021 at the request of the Indian side. Further acceleration of delivery is not possible. This was reported by the FSMTC.

The Military Industrial Company showed the upgraded BTR-82AT with a new uninhabited combat module. The new module is equipped with its own self-contained battery; there are also manual targeting drives for firing in the absence of power.

Science and Technology Center "Elins" showed a line of new sighting systems. One of the company's developments, equipped with a thermal imaging system, is designed to modernize the Tunguska anti-aircraft missile and cannon system. The new sight is being prepared for serial production.

Russian Helicopters has started serial production of the upgraded Mi-35P combat helicopter. The helicopter received a new sighting and sighting system, a modern aerobatic complex with a third-generation long-wavelength matrix thermal imager, a high-resolution color television camera and a laser rangefinder. Also, the Mi-35P has a new digital flight system and a modified sighting and computing system.

These are the main novelties and news shown and announced on the first day of the forum. We will report on some other new weapons in separate news items or make reviews.

Ctrl Enter
Noticed oshЫbku Highlight text and press. Ctrl + Enter
We are
Reports from the militia of New Russia for 27-28 September 2014 of the yearDecember 2010 years. Russian March. Senseless and merciless? Notes not a Russian person
Military Reviewin Yandex News
Military Reviewin Google News
14 comments
Information
Dear reader, to leave comments on the publication, you must to register.