Russian passport as the last hope of the LDNR 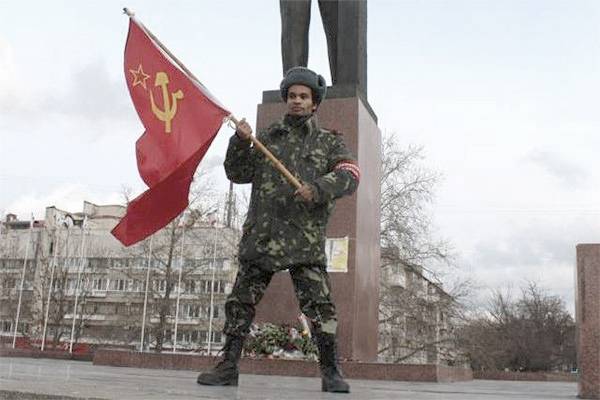 It is not easy to explain under what flags the self-determined republics of Donbass live today. Formally, the LPR, adhering to the letter of the Minsk agreements, remains a part of Ukraine and is preparing to return to the canopy of Kiev with a "special status". Unofficially, the government is talking about the imminent reunification with Russia. And to that, it seems, is really going. At the same time, because of all these omissions and the more than cautious position of the republican authorities about the role of Russia in the events in the Donbass and the assistance thanks to which the republics survived and which they live on daily, it is not accepted to speak. As a result, part of the population has an annoying illusion of some kind of independence, the ability of the LPR to autonomously exist, and even significance as an independent political entity. What are at least tales of how Donetsk and Lugansk were ready in 2014 to tear the Armed Forces to shreds and liberate Kiev, but Russia stopped them!

When you do not know who gives money for social services, housing and communal services and various payments, every now and then plugs holes in the frail local budget, while trying to make sure that it is not pilfered locally, helps sell coal and metal and makes a lot of invisible, but very necessary things, it may really seem that everything happens by itself, and Russia only presses and imposes its will on the proud young republics, which, without the oppression of the Kremlin, would long ago have developed in full growth ... Seductive illusions, and, judging by the experience of Ukraine and Belarus, - fatal.

It is noteworthy that countless oppositionists (including the apologists of "truly people's, independent republics") are no less fruitless both in terms of concrete steps to improve the well-being of the LPR and overcoming the crisis, and in the ideological aspect. Plans for the future end with the massacre of enemies and the accession of the head of the LPR, DPR, or even LPR to the shaky throne. And certainly on Russian financial resources. Nobody knows how to survive without constant and active assistance from the Russian Federation.

Ideology in the past

Against the background of an ideological vacuum and a lack of new meanings (not only in the LPNR, but also in Russia, where they are still trying to measure the crisis in the Donbass with a yardstick, which was outdated back in 2015), it became completely unclear to many why and why the republics arose and where they are. are now. Which is not surprising: initially, the region rebelled against the dominance of Ukrainian nationalism, then, seduced by the example of Crimea, advocated joining the Russian Federation, but under pressure from above, this point was removed from the text of the referendum, limiting itself to the creation of people's republics. But what should these republics be like and according to what principles should they exist? There was no clarity then, and it is not now. Which is also not surprising, given how diverse the public was at the origins of the LPNR: communists, nationalists, monarchists, romantic reenactors, dreaming of a “Donetsk-Kryvyi Rih Republic”, etc.

The idea of ​​creating Novorossiya lost its meaning after the suppression of protest movements in Kharkov and Odessa, and finally it was finished off by Girkin-Strelkov, who, with his famous "Kutuzov maneuver", surrendered to the enemy two-thirds of the territory of the former Lugansk and Donetsk regions. The announced nationalization was limited to small extractions and saws (against the background of the industry continuing to work for the Ukrainian owners and in the Ukrainian legal field) and was crowned with the bondage of external management of Vneshtorgservice CJSC. And the stillborn Minsk Agreements, the essence and meaning of which, without puffing up their cheeks and bad pathos, no one bothered to explain to the general public, caused confusion among many, which gradually grew into defeatism. But there were also Prilepin and Kazakov, who, having surrounded the naive Zakharchenko, cynically sent him either to take London, or to announce the creation of Little Russia.

All this leapfrog demoralizes the population and definitely plays into the hands of the opponents of the republics. But another moment is immeasurably worse: the lack of sensitive leadership from above and the complexity of the discourse led to the fact that the republican officials simply refused to show not only the initiative, but also the usual sanity on the ideological and information fronts, forgetting about all the "braces", except perhaps the feat of the Great World War II.

The LPNR authorities practically refused to openly support Orthodoxy, although the struggle against Ukrainian schismatics and Uniates was one of those motives that united and unites thousands of dissimilar people, people with completely different worldviews. The clergy practically do not appear next to the top officials of the republics, and are rarely shown on television. Legislatively in the self-determined republics there is a clear orientation towards Orthodoxy, all non-Abrahamic religious beliefs and movements are banned (or they create insurmountable difficulties when registering), but they seem to be afraid to talk about it out loud.

The LPNR refuses to honor the defenders of the republics in a shameful way. Moreover, we are talking not only about benefits and social security (currently almost absent), but also about much simpler things. There is a semi-official cult of famous field commanders - Givi, Motorola, etc., but not a word has been heard about today's heroes. The deceased do not receive civil funeral services and military honors, those awarded do not receive well-deserved glory. It seems that under the yoke of the Minsk agreements, Donetsk and Lugansk are ashamed of their defenders, preferring to cultivate myths about an all-powerful militia (in fairness, it should be noted that today there are thousands of former militias in the ranks of the people's militia).

The situation is similar with regard to working people: not only do metallurgists and miners receive pennies, and even then with delays, they are also deprived of at least nominal manifestations of respect, not counting the duty congratulations on the day of their professional holiday. Sometimes, in search of a plot, local television revives the training manuals of the times of the Central Committee of the CPSU and shoots a plot or two about hereditary miners or foremost metallurgists, but this looks, to put it mildly, not very believable and natural.

The republican authorities and the media are far from being specific and consistent in their attitude to Ukraine. Today they talk about neo-fascism and war criminals, tomorrow they ask the President of Ukraine Zelensky "to recognize the choice of Donbass" and send long heartfelt letters to the Ukrainian guarantor asking him to ensure compliance with the Minsk agreements and an armistice on the front lines.

Thank God, the local authorities have the courage to declare their commitment to the idea of ​​reunification with Russia and other things that are relatively safe, but still do not fit into the framework of the Minsk agreements. Otherwise, the course of the LPRP would become completely incomprehensible. And this is not surprising, because all the ideological work and activity in the field of information resistance to Ukrainian propaganda boils down to the fact that nationalists seized power in Ukraine, and now it is about to "collapse on its own," and meanwhile the republics are rapidly creeping into unprecedented prosperity, because that they remember the feat of their grandfathers in the Patriotic War and glorify Givi and Motorola. Of course, this is not enough even for a more or less intelligible speech, not to mention something more complex.

Unfortunately, Lugansk and Donetsk today are in a state in which if the local authorities decide to remove the Shevchenko monument from the city center, they will find themselves in difficulty: whose sculpture to put instead of this popular popular symbol of Ukrainian nationalism? The government is aware of this vacuum and from time to time they try to fill it with something, but here's the trouble: as a result, again and again, some constructs are obtained that are very popular with officials and absolutely indifferent to the population. Probably because they are made far from the twists and turns of the mining region.

Against the background of the absence of civil society as such and attempts to contribute to its creation (stillborn public chambers are not counted), given the lack of a coherent ideological platform, censorship, and the "complex nature" of the local media, forced to talk about either Ukraine's troubles or the victories of the republics, there is nothing surprising in the fact that many inhabitants of the LDNR prefer to keep in touch with Ukraine, work there, or even send their children to study at Ukrainian universities. And you can try to ignore these losses as much as you like, claiming that these are all "Crypto Bandera" and it is not a pity to lose them, but before hanging labels, it would be worth trying to offer people something more than an endless celebration of fictional achievements. Make sure that the republican passport is more than a pass to Russian citizenship.

So far, unfortunately, the Russian passport is the only really existing and valid seal in the LDNR. But it is in no way a merit of the local authorities, which were not even able to promptly convince their citizens to receive republican documents.

In general, as always, the only thing to hope for is Russia and its “Varangians”, that they will come and teach them how to live and what to believe. Because local thinkers are clearly not ready for such challenges.

Ctrl Enter
Noticed oshЫbku Highlight text and press. Ctrl + Enter
We are
Results of the week. "This bad man will betray us at the first danger!"Situational analysis of the death of the MH17 flight (Malaysian Boeing 777), made on the basis of engineering analysis from 15.08.2014
Military Reviewin Yandex News
Military Reviewin Google News
82 comments
Information
Dear reader, to leave comments on the publication, you must to register.