Why Trotsky was killed 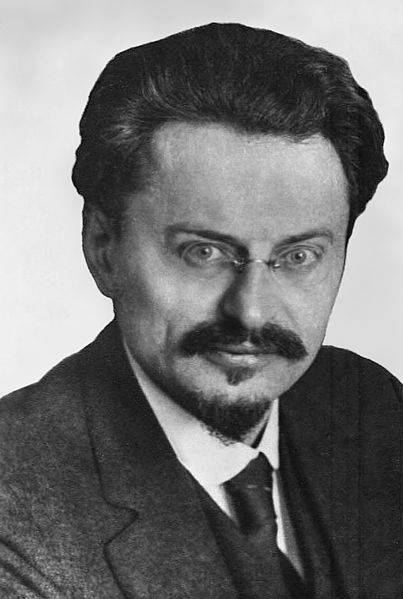 The theorist of the world revolution was killed 80 years ago. On August 21, 1940, Leon Trotsky died. He never managed to organize a stab in the back of Russia during the Second World War.


Stalin summed up the results of Trotsky's activities:

“A man has gone to his grave, whose name is pronounced with contempt and curse by the working people all over the world, a man who for many years has fought against the cause of the working class and its vanguard, the Bolshevik Party. The ruling classes of the capitalist countries have lost their faithful servant. Foreign intelligence lost a long-term, hardened agent who did not disdain any means to achieve his counter-revolutionary goals. "

An attempt at a new stab in the back of Russia

During World War II, Trotsky and his associates tried to carry out an operation, which they successfully carried out during the First World War. The "fifth column" in Russia-USSR was supposed to strike at the Stalinist empire at the time of its war with Germany (possibly Japan). Trotskyists, internationalist revolutionaries associated with the Anglo-Saxon intelligence services and the financial oligarchy of London and Washington, have successfully destroyed the Russian autocracy and the Russian Empire. However, after the death of Lenin, Trotsky did not manage to seize control in his own hands, he was defeated by the Russian communists, supporters of Stalin.

Stalin abandoned the idea of ​​a permanent world revolution. In fact, in the USSR, many foundations and traditions of the Russian Empire were revived. The foreign and domestic policy of the Stalinist government was in the interests of the state and the people. Moreover, Stalin and his associates were able to defeat most of the left deviators, Trotskyists and internationalists. Trotsky was exiled in 1929. But he retained a strong position in the Red Army and the nomenclature. Only the "Great Purge" made it possible to eliminate most of the "fifth column" in the USSR (How Stalin defeated the "fifth column"). Especially in the leadership and the army. Underground subversive structures in the country were destroyed. As a result, the Soviet Union passed the test of war. The actions of the Nazi separatists in the Baltics and Ukraine could not undermine the unity of the state and the people.

The Moor did his job. Trotsky was privy to practically all the secrets of the first and second revolutions in Russia in 1905-1907. and 1917 respectively. He knew a lot about the affairs of the so-called. the world behind the scenes (the global financial oligarchy), much more than Radek or Rakovsky. He knew how the Russian Empire was killed, how the Second Reich was used against the Russians, and then the Kaiser was overthrown. At one time, Lev Davydovich helped to arrange a revolution in Germany.

The Trotskyists have established contacts with the Abwehr. There was a threat that Hitler would receive information that would significantly expand his measure of understanding. The owners of England and the USA did not need this at all. Also the Trotskyists were a threat to the USSR. In the Soviet Union, most of the "werewolves" and "rats" were destroyed, but Stalin knew well that in a world war, such a revolutionary authority as Trotsky could become a serious threat. It was necessary to destroy the very possibility of a new "front" against Russia. In addition, Trotsky himself was "running up". His work against Stalin became more and more dirty, more and more defiant. They were becoming more and more personal. Such publications pushed Moscow to retaliate.

Here the interests of the USA and the USSR coincided. In 1936, Lev Davidovich was expelled from Norway. He was forced to move to Mexico, settling in Coyoacan, a suburb of Mexico City. Trotsky turned his villa into a fortress. He feared assassination attempts. And he feared, apparently, not only the NKVD. So, Trotsky was unable to move to the United States. Despite wanting to be an American citizen. He was refused. Trotsky ceased to be of interest to the Anglo-Saxon special services. The Trotskyist network in Russia was practically destroyed. That is, his role, the role of a possible replacement for Stalin, was lost. Leon Trotsky was unable to create a strong network in the world. The revolutionary wrote a number of works, muddied Stalin, accused him of "Bonapartism", declared that he had betrayed the "cause of the revolution" and got in touch with Hitler. In 1938 he created the IV International. However, after the Spanish adventure (where the Trotskyists lured a lot of volunteers from all over the world), which ended in a heavy defeat, the prestige of this organization fell sharply. The International began to disintegrate. In addition, Trotsky's eldest son, Lev Sedov, died, on which the organization was held (the leader of the world revolution himself devoted almost all of his time to literary creativity).

Thus, the theorist of the world revolution has exhausted himself. In the United States, a book by Colonel House was published, where it was quite clearly shown whose agent Trotsky was in fact, whose instructions he followed. In 1939, this one was published from top to bottom in the USSR. This could only happen with the permission of the Soviet leader. That is, Trotsky, as a "long-term, hardened agent" of the West, was "exposed". And overexposed agents are usually destroyed. Stalin personally gave the indication of the operation to liquidate Lev Davidovich. In the NKVD, she was led by Beria and Deputy General Sudoplatov. Direct leadership was carried out by Naum Eitingon (Operation Duck). He was an experienced intelligence officer, organizer of foreign espionage and sabotage operations.

Interestingly, in March 1940, Harvard University bought from Trotsky the rest of his archives (about 20 thousand storage units). The purchase happened just in time. Lev Davidovich's archives did not fall into unwanted hands. In May, a group of militants led by the communist artist Siqueiros, dressed in police uniforms, attacked Trotsky's villa (the operation was led by an NKVD agent). The attackers broke into the building, riddled the walls and disappeared. True, due to the inexperience of the attackers (these were miners, workers, participants in the war in Spain, and not experienced killers), Lev Davydovich and his wife, lying on the floor, survived. At the same time, the group was supposed to seize Trotsky's archive, but he was no longer in the building.

Then Eitingon performed another operation. On August 20, 1940, another Soviet agent, Ramon Mercader, eliminated the "demon of the revolution." He penetrated his entourage as a convinced supporter of his and brought him his manuscript. Trotsky sat down to read it, and Mercader stabbed him in the head with an ice pick. Lev Davydovich received a mortal wound and died on August 21. He wished to be buried in the USA. But America, which he valued so much, for which he did so much, ensuring the collapse of its main competitors, the Russian and German empires, refused to accept his ashes. He was buried in the yard of his own house.

Mercader was thrown into prison, tortured. But he didn't break. He insisted that he was a Canadian, Frank Jackson, that he killed Trotsky because of his love for his secretary Sylvia (the leader of the world revolution was noted in many love scandals) and because the Trotskyists squandered the money he donated to the party. The killer served 20 years, and after his release he arrived in Moscow, where he received the Order of Lenin and the Star of the Hero of the Soviet Union.

Ctrl Enter
Noticed oshЫbku Highlight text and press. Ctrl + Enter
We are
Myths of the Great Patriotic. Did Stalin have prostration in the first days of the war?The myth of the irreproachable knight of the revolution Trotsky
Military Reviewin Yandex News
Military Reviewin Google News
351 comment
Information
Dear reader, to leave comments on the publication, you must to register.