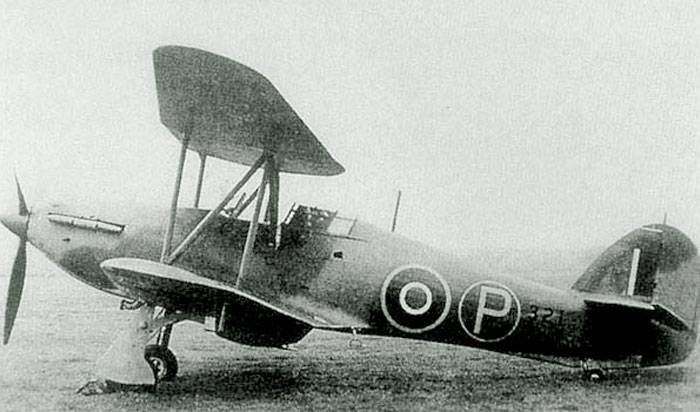 FH.40 on the ground with a wing mounted

In 1941, the British company F. Hills & Sons (Hillson) built an experimental Bi-Mono aircraft with an unusual slip-wing design. He was supposed to take off in a biplane configuration and in flight drop the upper wing, which made it possible to improve performance on takeoff and during flight. The RAF became interested in this project and work soon began on the Hawker-Hillson FH.40 Hurricane.

From experience to project

Flight tests of the experimental "Bi-Mono" began in the spring of 1941, and on July 16 they performed their first flight with a wing drop. Soon after that, the car was handed over to the KVVS for its own tests. Based on the results of these checks, a voluminous report was drawn up.

The military found that a slip-wing aircraft is more complex than a "regular" monoplane in terms of design and operation, but does have significant advantages in takeoff and landing characteristics. Based on the test results of Bi-Mono, it was recommended to continue developing the concept and implement it on the basis of one of the existing fighters. 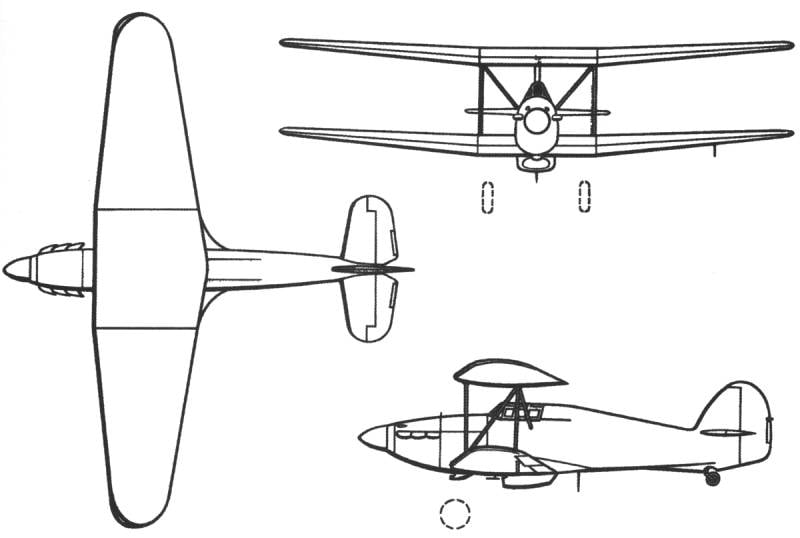 At the beginning of 1942, the KVVS ordered the Hillson Company to develop a new aircraft with two wings. It was decided to take the Hawker Hurricane Mk I fighter as a basis for it. The design team led by W.R. Chaun and E. Lewis quickly prepared a project with the working title FH.40 Hurricane.

For use in the new project, Hillson provided a serial Hurricane modification of the Mk I with w / n L1884, built several years ago. After a short service in the KVVS, in 1939 this aircraft was sold to Canada, where it received w / n 321. Already in 1940, as part of the 1st squadron of the KVVS of Canada, the fighter flew home and again changed owners. At the beginning of 1942, the British KVVS transferred it to the flying laboratory for rebuilding. A very remarkable "biography" for an airplane of that time.

In the shortest possible time, Hillson has designed the necessary set of additional equipment. It included a drop wing, a set of struts and drop controls. When developing them, it was necessary to take into account the main features of the base aircraft. In particular, the design of the canopy forced the wing to be raised higher than usual so that it would not interfere with landing in the cockpit.

The new "sliding wing" repeated the design of the standard aircraft planes, but was not an exact copy. A wooden power set with linen sheathing was used. Profile - Clark YH with 19% thickness at the center section and 12,5% ​​at the tips. The sweep of the leading and trailing edges, the shape of the tip and the transverse V corresponded to the standard wing. The plane received a new "solid" center section with an additional fuel tank. There was no mechanization on the wing.

Nose view. The racks of the second wing are clearly visible
On the center section and fuselage of the aircraft, mounts appeared for installing racks under the additional wing. It was held in place by two N-shaped tubular struts. Another pair of ramps connected the upper wing and fuselage. To drop the struts together with the wing, it was planned to use electrically ignited squibs.

In the center section of the dropping wing there was a parachute compartment with the simplest automatic release. Almost immediately after leaving the plane, the wing was to release a parachute and make a soft landing. This made it possible to save not the simplest and cheapest unit for later use.

According to the calculations of engineers ...

The FH.40 project was developed to improve a number of tactical and technical characteristics of the base Hurricane. The additional wing made it possible to increase lift, and with it some flight characteristics. This increase in parameters could be used for different purposes.

The slip-wing concept originally emerged as a way to improve takeoff performance. The presence of the second wing reduced the take-off speed and reduced the required runway length, as well as simplified the climb. After reaching the desired height, it was possible to drop the wing and obtain the high speed and maneuverability required by the fighter.

It was also found that the wing being dropped can increase the combat load and / or range. In this case, the additional lift compensated for the increase in the mass of weapons and made it possible to take off in the same way as under normal load. Additional fuel could also be taken on board in the upper wing.

The additional wing with attachments weighed 320 kg. Calculations have shown that the increase in lift due to the second wing makes it possible to increase the takeoff weight up to 4950 kg - about a ton more than that of the base fighter. The upper wing tank brought the fuel supply up to 1680 liters, and the flight range increased to 2300 km. At the same time, the aircraft retained all standard weapon and combat capabilities. After dropping the upper wing, it was no different from the equipment in the standard configuration.

The development of the project took a little time, which could not be said about its implementation. At that time, the Hillson company was fully loaded with orders from the military department, and it was not easy for it to find opportunities for work on a new project.

The construction of just one wooden-canvas wing with accompanying equipment and a minor alteration of the fighter-flying laboratory took more than a year. Only in the spring of 1943, the FH.40 was taken out of the assembly shop and sent to RAF Sealand for testing.

Preliminary tests have confirmed the improvement in take-off performance and some simplification of piloting. We also performed test drops of the upper wing. The plane successfully separated from the aircraft, gained altitude and lagged behind it. Then the parachute would open and the wing would land. The fighter itself, dropping its wing and losing part of the lift, slightly lost altitude and did not risk colliding with a flying unit.

In the summer of the same year, the prototype was transferred to the Airplane and Armament Experimental Establishment (A & AEE), which was supposed to conduct all the necessary tests in the interests of the KVVS. Flights began again in different modes, wing drops, etc. In the future, the command had to study the test results and make its decision.

Tests of the FH.40 at A & AEE continued until the spring of 1944. All the main characteristics and capabilities were confirmed, and the project as a whole received a good assessment. However, by this time, the KVVS's interest in him had dwindled. This was due to both the slip-wing features and the progress in the field of combat aviation.

"Hurricane" with an additional wing really showed improved take-off characteristics, could take on board additional combat load or fuel. However, all this was achieved through the installation of a complex and expensive unit. In addition, during landing, the wing was often damaged and needed repair, which increased the cost of operation. 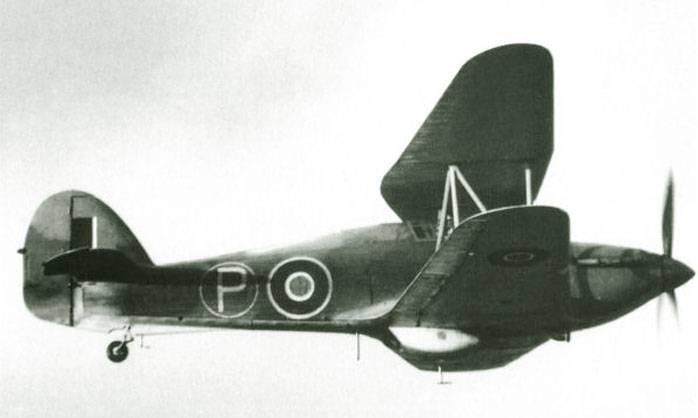 By 1944, the FH.40 project was obsolete. It used a base aircraft of an early modification with limited flight performance. Later versions of the Hawker Hurricane had rather high parameters and in some cases were comparable to a flying biplane laboratory. Fighters of newer types also, at least, were not inferior to the experimental machine.

The future of the project was in question. The addition of an additional wing did improve some of the characteristics of the Hurricane Mk I, but this improvement was belated and no longer practical. The potential of such a design could be realized as part of the modernization of newer fighters, but this step was considered unnecessary and inappropriate.

As a result, in the summer of 1944, work on the Hawker-Hillson FH.40 Hurricane was stopped due to the lack of real prospects. New equipment was removed from the prototype and then used as a flying laboratory for other research. According to some reports, a few months later, the next test flight ended in an accident, after which the plane was not restored. The slip-wing kit was apparently scrapped immediately after the project was closed.

Thus, two F. Hills & Sons projects did not leave the development and testing stage. A potential customer in the person of KVVS initially had limited interest in this proposal, and after testing it completely lost it. By the time the experienced FH.40 appeared, the KVVS already had modern machines with high performance that did not need an additional "sliding" wing. Work on this topic was stopped and never resumed.