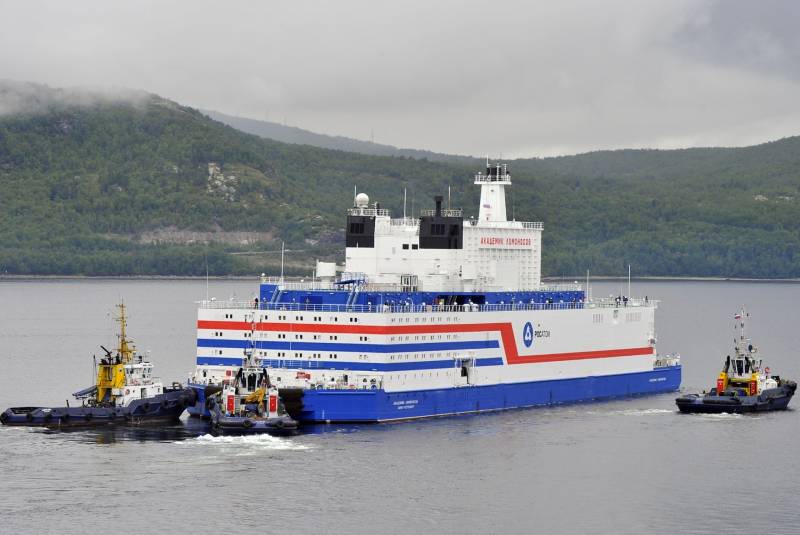 Towing the Akademik Lomonosov floating nuclear power plant to the place of work. Photo by Rosatom

The development of nuclear power continues, and one of its most interesting areas is the creation of compact and mobile power plants. They have noticeable advantages over traditional stationary NPPs and can be used in various fields. In recent years, several similar projects have been developed in our country, and the most famous has already been brought into operation.

On May 22, 2020, the first domestic floating nuclear power plant (FNPP) "Akademik Lomonosov", pr. 20870 was put into commercial operation. The station is deployed in the port of Pevek (Chukotka Autonomous Okrug). In December last year, she gave the first current to the local power grids, and in June heat supply began.

The main element of the floating nuclear power plant is a floating power unit - a non-self-propelled vessel of a special design with a displacement of more than 21,5 thousand tons. The power unit is equipped with two KLT-40S reactors and two steam turbines. "Akademik Lomonosov" can produce electricity and steam for heating, as well as carry out desalination of sea water.

The power unit is operated together with special onshore facilities. From the ice it is protected by a special pier. Also onshore is the infrastructure for the transmission of electricity and steam to local distribution networks. 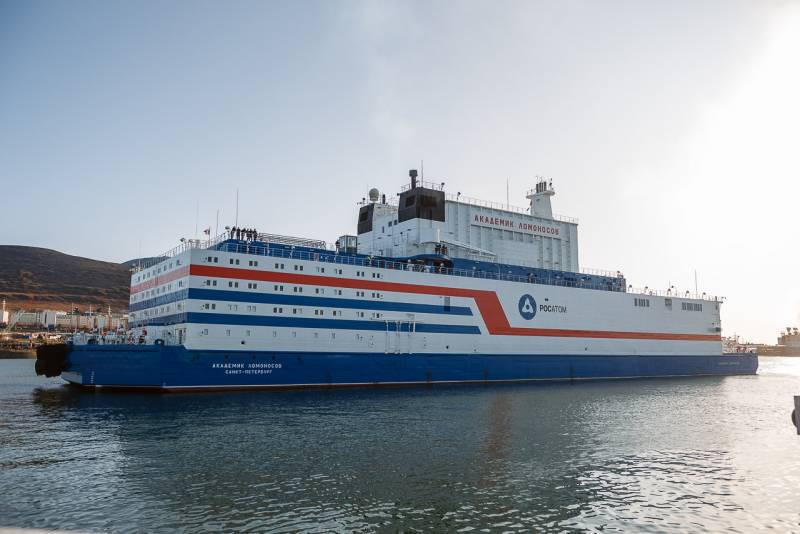 "Akademik Lomonosov" in the port of Pevek. Photo by Rosatom
The maximum power capacity of the newest floating nuclear power plant is 70 MW. The maximum thermal power is 145 Gcal / h. It is argued that such characteristics are sufficient to provide a settlement per 100 thousand inhabitants. It is curious that the entire population of the Chukotka Autonomous Okrug is half as small, and there is a serious reserve of capacity.

"Akademik Lomonosov" will be able to work up to 35-40 years. Annual maintenance and repairs can be carried out on-the-fly. After 10-12 years of operation, average repairs are required at the factory, after which the power unit can return to the berth and continue to generate power.

Rosatom is already proposing a new FNPP project with improved characteristics. By replacing two KLT-40S units with RITM-200 products, it is possible to bring generation to 100 MW and improve other parameters. 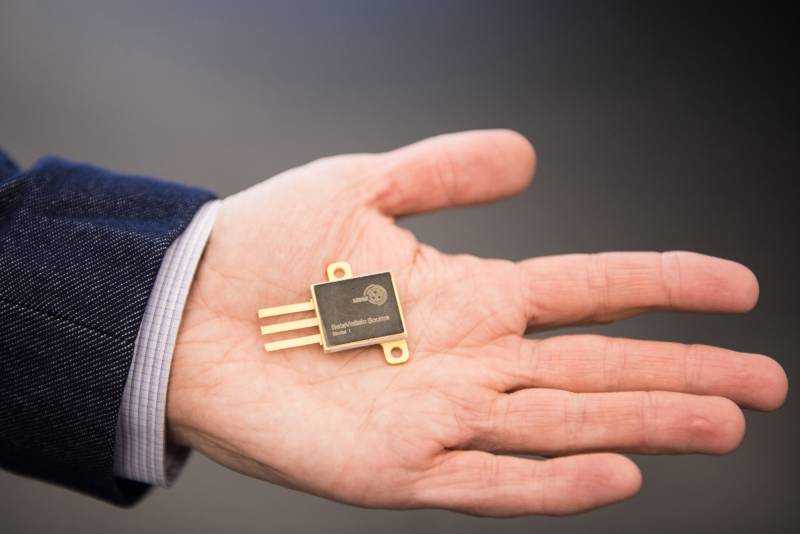 Remarkable results have also been obtained in the field of ultra-compact power plants. Thus, the National Research Technological University "MISiS" has been working on a "nuclear battery" for the past several years - the so-called. a beta-voltaic current source based on nickel-63. The first prototype of such a device was presented in 2016, and it was further improved.

The principles of the betavoltaic system are quite simple. The battery contains a radioactive element that decays to form β-particles. The latter fall on the semiconductor converter, which leads to the formation of an electric current. By using different fissile materials, semiconductor configurations, etc., batteries with different characteristics can be created.

"Nuclear batteries" from MISIS have an interesting design. This element contains 200 layers of nickel-63 with a thickness of 2 microns, separated by 10 micron diamond transducers. The latter have a microchannel three-dimensional structure, which makes it possible to almost completely absorb the formed β-particles.

The finished battery has minimal dimensions - no more than 3-4 mm thick, taking into account the case. Weight - 0,25 g. The performance is just as small. Electric power is only 1 μW. However, the new product from MISiS compares favorably with other developments in increased efficiency and lower cost. In addition, it is capable of delivering current for many decades. 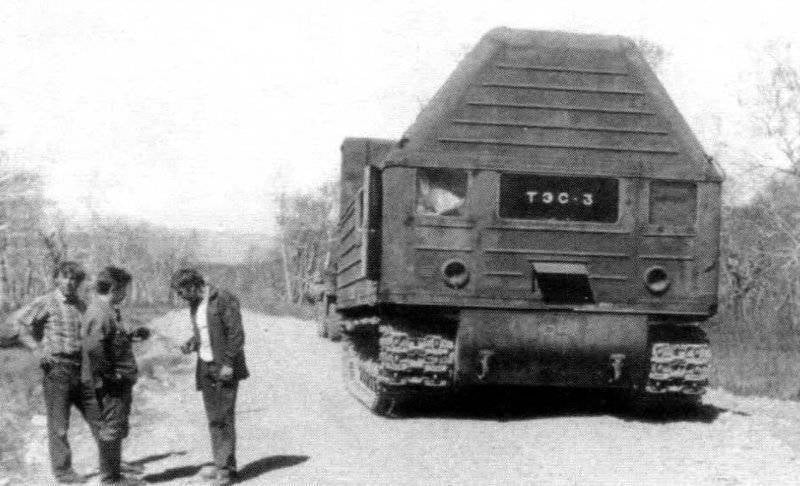 The mobile power unit TPP-3 is one of the earliest developments of this class. Photo Wikimedia Commons
At present, the domestic "nuclear battery" of the beta-voltaic type is becoming the topic of publications in scientific journals and events are underway for international patenting. In the future, it is possible to introduce such devices into practice. The main field of application will be a variety of research and special devices with low energy consumption and high requirements for the duration of the operation. For example, it can be equipment for marine or space research.

Previously, they tried to introduce nuclear power sources in medicine, but they had to be abandoned due to negative side effects. The new version of the battery does not threaten human health, thanks to which it can be used in neuro- and cardiac pacemakers, various implants, etc.

In the past, small-sized nuclear power plants on self-propelled or towed chassis were created in our country. Then not a single project of this kind reached mass production and use. Several years ago it became known about the resumption of this direction.

In September 2017, information about the start of work on two new small-sized nuclear power plants (MAEU) appeared in the domestic media. The development is carried out at the request of the Ministry of Defense and provides for the creation of power units with a capacity of 100 kW and 1 MW. They should be built on a towed chassis that provides the ability to quickly transfer and deploy to a new location. 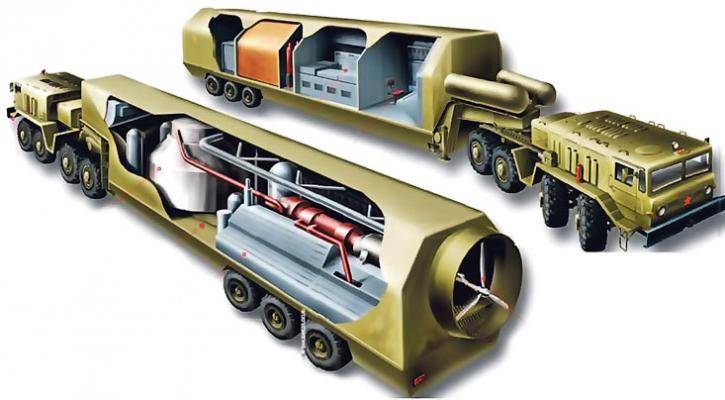 Mobile NPP "Pamir-630D" - a project of the Soviet era. Figure Tehnoomsk.ru
It was stated that the development of two MAEU would take approx. 6 years. The purpose of such products was not disclosed, but there were estimates of their possible use for power supply of remote military or civilian objects. In addition, suggestions were made about the possible use of the MAEU as part of promising weapon systems with high energy consumption. At the beginning of 2018, fundamentally new samples were announced - and mobile power plants could complement them.

Almost three years have passed since the first reports on the development of the IEAU for the Ministry of Defense, and new details have not yet appeared. Perhaps the following news will appear later, closer to the specified completion date. However, another scenario cannot be ruled out - the project could have been terminated, and therefore no news can be expected.

Despite all the difficulties and ambiguous reputation, nuclear power is of great interest to military and civilian structures. One of the most important and promising areas is becoming small-sized and mobile power plants with various capabilities.

The Russian nuclear industry is actively involved in this area, and news about new successes, promising developments and ready-made samples is regularly received. This allows us to make optimistic forecasts for the future and wait for the next achievements - scientific, technical, practical and commercial.

Ctrl Enter
Noticed oshЫbku Highlight text and press. Ctrl + Enter
We are
Ambiguous future of European nuclear powerFor floating APP - the future!
39 comments
Information
Dear reader, to leave comments on the publication, you must to register.