How Motor Sich was rescued. The series continues 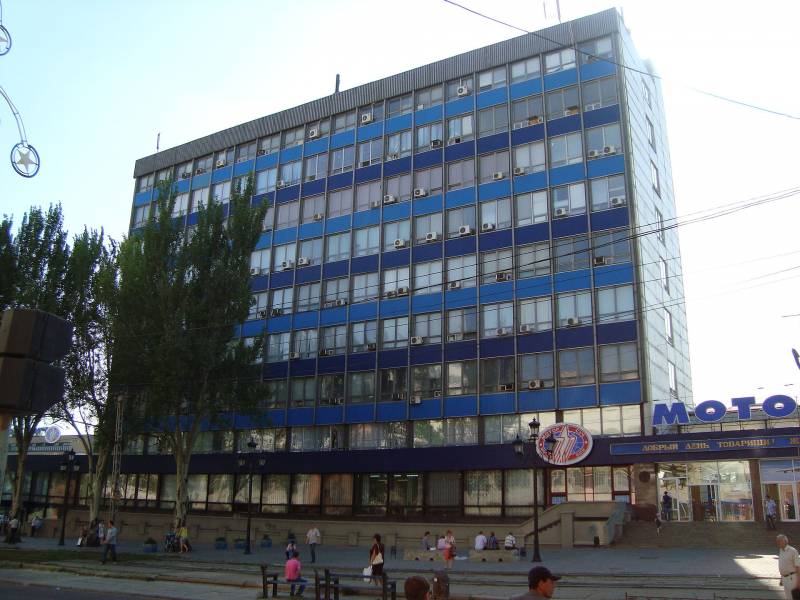 It is now out of fashion to write about how world-class enterprises and companies disappear from the Ukrainian land. The topic has set the readers on edge so much that it causes irritation and indignation rather than a desire to protect or save the enterprise being killed. Even those who gave many years of their lives to work at such factories, factories, SKB, gave up a long time ago and only with bitterness note the stop of another workshop, plant, concern.


Ukraine, as it should have been with a technically and scientifically developed republic, has long been a battlefield between two economic giants: the United States and China. The battle for Soviet unique technologies, the battle for the "piece" cadres of engineers and designers, the battle for unique scientific developments and design ideas.

We will talk about one of these battles today. About the epic with the sale of a controlling stake in the Soviet concern Motorostroitel, which is better known to the modern reader as Motor Sich, to the Chinese company Skyrizon. The reason for this interest: Ukraine suddenly "remembered" that the concern is a unique enterprise and its loss would mean the loss of an entire industry.

It is clear that the memory returned for a reason. The memory came back with a very painful injection from Washington. And the Ukrainian prosecutor's office moved from the same injection. A case was opened on the illegal sale of the concern, and already within the framework of this case, Motor Sich shares were arrested.

How it all began

And it all started in the same way as it began at many enterprises in Russia. Privatization of the 90s. The engineers and workers of the concern, who do not understand anything in economics, decided to keep their favorite factories and handed over a controlling stake to a “good man”, director of the concern Vyacheslav Boguslaev. This is an ordinary matter and little deserving of our attention.

Moreover, having become the owner of the company, Boguslaev really managed not only to maintain production, but also to develop it. He understood perfectly well that entering the already occupied Western market would be difficult, but the traditional Russian market and the East Asian market would gladly consume the concern's products. Russia, China, India. Not tiny and not poor states at all.

Let me remind you that Motor Sich is a unique enterprise with a full cycle of development and production aviation engines, cruise missile engines and industrial gas turbines. Moreover, the concern not only develops and manufactures engines, but also maintains and repairs them during operation.

Russia greatly helped the development of the concern. When we are in the 2000s. began to actively revive the aviation industry, the concern, if not flourishing, then existed quite satisfying. Profits grew, production developed. Following Russia, China and India began to cooperate more actively. A billion in profits a year didn’t look out of the ordinary. A good job pays well.

The events of 2014 broke this idyll. Remember the numerous decrees and orders banning trade with the aggressor country during this period? Motor Sich stopped concluding new contracts with Russia, but it regularly supplied old equipment. True, there was one more reason for the drop in production. This is a plant in Snizhne. The plant for the production of turbine blades, which remained in the territory not controlled by Ukraine. But this plant also regularly fulfilled its obligations to the concern.

As the contracts were fulfilled, Motor Sich's profits began to fall. There was no longer any talk of a billion. The billion turned into 300 million and continued to shrink. Bankruptcy loomed in the future. Moreover, President Poroshenko clearly led the concern in this direction in order to force Boguslaev to sell the concern for a pittance.

The owner of Motor Sich perfectly saw the situation and prospects of the concern. He had no illusions about his company. Therefore, he took a number of steps to save her. And, it seems to me, the salvation of a personal wallet. Already in 2017, a year before the termination of contracts with Russia, Boguslaev agreed to sell a controlling stake in a Chinese private company. Legally, the deal is perfect.

Here it is necessary to digress from the topic. The Chinese have long passed the period of mechanical copying (theft) of other people's industries and other people's products. Today, the PRC is capable of independently producing world-class products. And the main goal of Chinese companies today is not overseas machine tools and production facilities. The main goal today is precisely technology and design and scientific developments.

So, in 2017, the controlling stake in Motor Sich is sold to Skyrizon. And almost simultaneously with this deal, the Chinese are starting to build their own factory in Chongqing. Moreover, the fact that the plant will use Motor Sich technologies is not even hidden. A simple question arises, the answer to which will show who beat whom: the confectioner's motor builder, or vice versa. Where at the start of the construction of the plant was the technological and design documentation from the Ukrainian concern? ..

Another fact is also interesting. The Chinese company has already invested $ 100 million in Motor Sich. Why on earth? Considering that attempts to break off the deal and all sorts of criminal cases against the concern in September 2017 began to grow like mushrooms after rain. And the articles on which the cases were initiated are rather high-profile. "Sabotage". "Preparing for a crime." And others. Suffice it to say that already in September 2017, the court arrested 41% of the shares of Motor Sich.

The SBU began to act even more actively in 2018. This is understandable, Poroshenko's presidential term was coming to an end and it was necessary to crush Boguslaev. April 2018 for the concern became a time of mass searches, pressure on employees in order to uncover sales schemes and other procedural misfortunes associated with cases in the SBU. Ultimately, the court arrested all the shares of the foreign owners of Motor Sich.

Instead of a "wind of change", a breeze from a home fan

The initiators of this whole supposedly legitimate campaign to cancel the deal on the sale of Motor Sich were the Americans. Unlike Ukrainian politicians, whose eyes are clearly set on the "green color of the American currency", the Americans perfectly understood the importance of Motor Sich for the defense complex of the PRC. Soviet technologies and developments by Ukrainian designers will give the Chinese a significant advantage in the production of, for example, helicopters and cruise missiles.

In order to immediately eliminate skeptical remarks that, they say, the Americans are to blame, as always, look at the materials on John Bolton's visit to Ukraine in the summer of 2018. The overseas owner did not even hide the fact that he had come precisely about this transaction. The purpose of the visit was explained as follows: breaking the deal on Motor Sich. By the way, after the visit, the number of criminal cases against employees of the concern has increased significantly.

Let me remind you about another visit of the American billionaire to Ukraine. I'm talking about the visit of Eric Prince, "the world's main mercenary," the founder of the Blackwater PMC and Donald Trump's freelance security advisor. At the time of the visit, he is the executive director and deputy director of the Frontier Services Group PMC, which is located in Hong Kong and Beijing and is engaged in the protection of Chinese enterprises in Africa.

Despite the hopes of Ukrainian politicians that Americans would come to Motor Sich, both visits ended in nothing. That is, at the local level, in Ukrainian courts, in the Ukrainian prosecutor's office and the SBU, everything is fine. They block, arrest, start cases, but ... The Chinese are not such simple and poor people to do this to them. The Chinese tiger has the grip of a bulldog. If you grabbed it, it won't let go.

It was not in vain that I wrote above that Boguslaev conducted the transaction to buy a controlling stake very cleanly. According to experts in international law, if the case is transferred to international courts, the prospects for winning cases there from Ukraine are zero. All this mouse fuss of the Ukrainian government bodies became possible for one simple reason. I think the Chinese are still hoping for a solution to the property issue in their own way, quietly and quietly.

Perhaps this explains the involvement of another powerful Ukrainian oligarch, Alexander Yaroslavsky (DCH Group), to whom the Chinese owners of the concern sold 25% plus one share. Two weeks ago (August 4), the deal was announced to the Beijing Skyrizon Antimonopoly Committee and DCH Group.

Ukrainian justice responded in its own way. Two days later, for some reason, the SBU “prequalified” the Motor Sich case with another article: “High treason”. Yaroslavsky turned directly to President Zelensky with a demand to take action. In this case, it is worth paying attention to one significant nuance. In addition to appealing to international courts, which threaten Ukraine with multimillion-dollar losses, Yaroslavsky directly pointed out a possible cooling of relations between Ukraine and the PRC.

Show must go on

Let's summarize some of the results. The Chinese business had an excellent operation to buy the latest technology in the motor industry. For little money, the latest technology was bought, the cost of which is estimated in billions of dollars. In addition, even if the transaction is canceled, the Chinese company will return all funds invested in the concern through the courts.

The importance of the concern itself to Beijing Skyrizon can be judged by the ease with which 25% of the shares were sold. The Chinese quietly gave up the controlling stake! Thus, they forced the already Ukrainian oligarchs to fight the Ukrainian state! What we are seeing today. So, the Chinese company wins anyway.

What did Boguslaev and Yaroslavsky get? Boguslaev secured himself and the concern from bankruptcy and received a powerful ally in the person of Yaroslavsky. Yaroslavsky, on the other hand, received a fat piece of a promising enterprise capable of competing in the world market. The only drawback in this situation is the need to terminate criminal cases. But this is not a problem in modern Ukraine.

The only loser in this situation was the labor collective of Motor Sich. The best specialists have either already quit and are working in China or Russia for good money, or are going to quit. The lack of orders for the company's products hits the wallet of all employees hard. The material base is collapsing.

So far, the series titled "How Motor Sich was rescued" continues. Only now the name is no longer consistent with the plot. It is necessary to replace the word "saved" with the word "killed". But this is already in the hands of the writers of the series ...

Ctrl Enter
Noticed oshЫbku Highlight text and press. Ctrl + Enter
We are
The tragedy of the American army ("The Atlantic", USA)Situational analysis of the death of the MH17 flight (Malaysian Boeing 777), made on the basis of engineering analysis from 15.08.2014
Military Reviewin Yandex News
Military Reviewin Google News
69 comments
Information
Dear reader, to leave comments on the publication, you must to register.