The nineties as a vaccine against the West 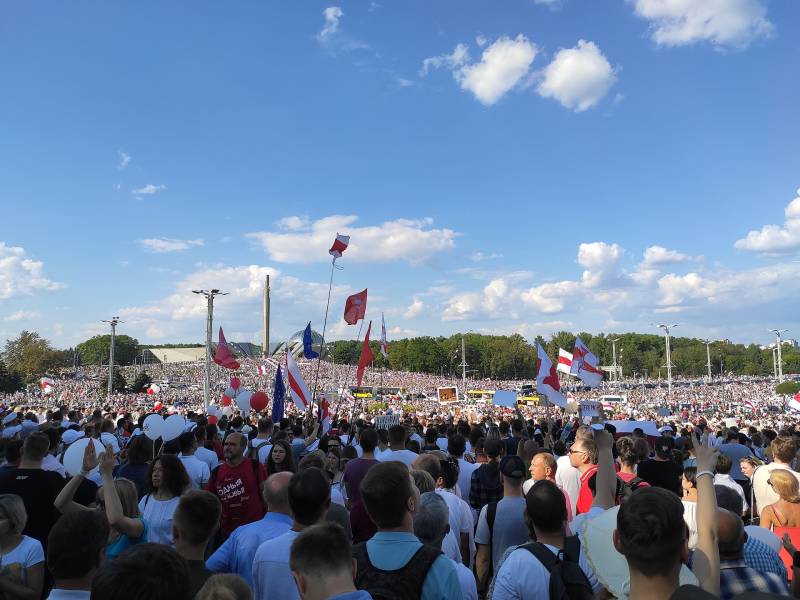 The topic of events in Belarus has been on the front pages of the media lately. Let's try to understand the origins of the civil conflict in this country from the point of view of a citizen of Russia.


Man is self-centered. He understands external phenomena through the prism of his “I”, his personal experience. Therefore, when analyzing events in another country, errors often creep in, associated with different perceptions of reality among the population of even neighboring countries.

You often hear the thesis: “Russians, Ukrainians and Belarusians are one people”. Is it so? The first severe blow to this concept came from the events of 2014 in Ukraine. When the seemingly “fraternal” people turned their backs on us, called us “shovels”, “quilted jackets”, “Mordor”, accused us of all conceivable and inconceivable sins. Relatives from this wonderful country called many people then with crazy questions like: "Is your Putin absolutely, tunnels?" Remember your confusion, attempts to justify yourself, to explain your position? Did the conversations help? Not.

But now time has passed. For Ukraine, the Russian market was gradually closing. The economy of the square began its peak. "Non-brothers", tightening their belts, began to appeal to the theme of one root, talk about "millions of pro-Russian citizens", about "they also suffer", about "finally lose". In response, they received a harsh response: "Everyone who wanted to be with Russia moved there long ago with their families, and let the grandchildren who rode on the Maidan feed the local grandmothers." The topic was closed. Here it would be appropriate to recall the Ukrainian guys who came to fight for the people's republics, and then received Russian citizenship for themselves and their families. People proved who they were with their blood.

Now in the political get-together of Ukraine, the use of the country by the West in its own interests is already presented as a given. It is noted that the economy has turned from an industrial to a raw material one. Local witches have introduced a new term - sorosets (incompetent henchmen of the West, acting to the detriment of the country's interests). Agree, a more accurate definition instead of ours - grant eaters.

The hate vector of Ukrainians is shifting from Russia to the West.

And this is the beginning of the path to understanding the essence. A person understands reality better with his stomach than with his head. The nineties began in Ukraine. According to statistics, the poorest country in Europe has begun its mental recovery.

Russia during the Yeltsin era was in the strong unfriendly embrace of the West. Dreams of a bright capitalist future shattered into everyday life. Remember. There were massive dismissals of workers, enterprises were closed. Workers and military personnel did not receive wages for six months or more. Doctors, teachers, scientists, so as not to die of hunger, went to trade on the market. The housing and communal services system collapsed, villages in Siberia froze ...

By the end of the nineties, a quiet but firm rejection of the West had already formed. It is absorbed into the skin, fixed in the DNA.

It was a terrible time. And paradoxically, it is very necessary. We have preserved ourselves, our mentality. They turned off the TV and refused to accept an alien culture, alien ideology, alien propaganda. They gritted their teeth and began to build their country.

If it turned out differently, we would have been devoured by now.

Let's go back to the Belarusians. They mildly survived the crisis of the collapse of the USSR. They managed to keep most of the enterprises (now unprofitable and working for a warehouse). They did not have to think about their daily bread, about the wild decline of morality and the rampant domestic crime.

And they kept faith in their bright future under the umbrella of the West.

Can you convince them? Explain that hot water in the tap, warm radiators, and a hearty meal don't come out of nowhere. Understand that these benefits are at the expense of Russia.

In my opinion, no. How in the nineties it was impossible to explain to the Russian citizens of a great country that Hollywood pictures of personal happiness are just a screen for the plunder of their homeland.

And the inhabitants of Sineoka do not have it. Not yet. But there is Euronews, showing the benefits of European civilization. And wet dreams to become a part of it. After that, can the Syabrs be blamed for not recognizing Crimea? After all, this is so in the mainstream of Western discourse. I really want to become a civilized European.

I believe that both Belarusians and Ukrainians will return to Russia again. But only after they feel in their own skin all the delights of the embrace of the West.