Belarus at a crossroads. What's next? 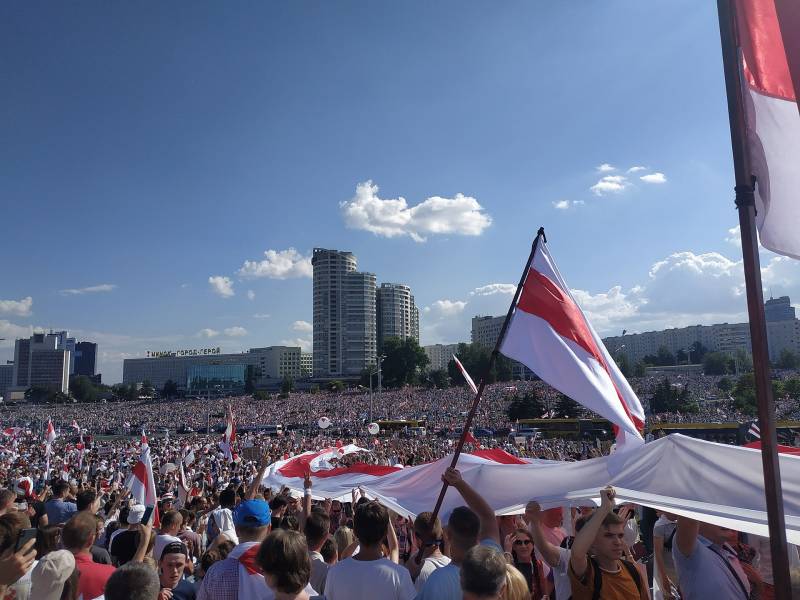 The rapidly developing events in Belarus, the massive public rejection of the Lukashenka regime and the interception of popular protests by Western countries and their Belarusian activists have put the country on the brink of serious tests. Lukashenka’s shortsighted policy with his cunning “multi-vector approach” worn out everyone in Belarus, Russia, and the West. The Belarusian society was excited, the “deep people” rebelled against the president, and the people's confidence cannot be restored to him. The president does not suit anyone, the “multi-vector approach” has suffered a crushing collapse, under any scenario Lukashenka will have to leave.


It would seem that he strove to build a welfare state, did everything for the people, did not allow the formation of an oligarchy and the plundering of the country, and the "ungrateful" people so unfairly push the long-standing head of state away from power. Lukashenka simply missed the moment when his struggle for the state turned into a struggle for individual and unlimited power. As a result, it became an obstacle in the further development of the state, as well as an “incapable of negotiation” element in the global confrontation between Russia and the West.

What forces operate in Belarus

He won the first round of confrontation and by force prevented an attempt by extremists to carry out a putsch, after which a delicate equilibrium ensued, which turned into a soft phase of “white maidan” and “lukamaidan”. Now Lukashenka is taking an exam for the right to rule the country, and the future of both Lukashenka and Belarus will depend on how this confrontation ends.

Both internal and external forces are involved in the events taking place. The sincere desire of the population to change society and improve its well-being, which was hampered by Lukashenka, was fueled and intercepted by Western experts on "color revolutions" together with the local opposition hired by them and aimed at destroying the state according to the Ukrainian scenario.

Who pursues what interests? Lukashenka seeks to preserve his power at any cost and is ready to make a deal both with the West and with Russia for this. The West, more precisely, the United States and their slander Poland, want Belarus to be separated from Russia, eliminate (including physical) Lukashenko, break up and plunder the state and turn it into its own colony on the model of Ukraine. Poland sees the possibility of reviving the Polish-Lithuanian Commonwealth with the inclusion of Lithuania and Belarus. The opposition and a significant part of Lukashenka's entourage want to remove him, come to power under the "roof" of the West, and plunder the Soviet legacy preserved by the incumbent president. Russia by any means seeks to keep Belarus in its sphere of influence and to continue the construction of the union state.

In this situation, two scenarios are possible.

According to the first, Lukashenka may lose if a general strike starts, the power is paralyzed, his team starts to scatter and he will lose the levers of government, and hundreds of thousands of protesters will actually surround state institutions and demand his resignation. In this situation, no one and nothing will save him, only the flight from the country will remain. Without Lukashenko, Belarus will inevitably go to the West, since the pro-Russian elite is not there, he successfully cleaned it out during the years of his rule. Instead of Lukashenka, the Americans will try to bring Makei to power.

In this regard, the question arises of what to do for Russia, for which this will be the second geopolitical defeat after Ukraine. It is hardly possible to seriously talk about the introduction of Russian troops in this situation, the Russian leadership is well aware that this will not be accepted by the majority of the Belarusian society, and it is pointless to fight with society. The future of Belarus will be decided by Russia and the United States. Russia, in order not to suffer a catastrophic defeat, will try to agree on the removal of Lukashenko according to the Moldovan scenario of Plahotniuc and the coming to power of intermediate forces, in which Russia would have a controlling stake in Belarus, and the West would have a blocking stake. In this issue, Russia can be an ally of Germany, which seeks to prevent the strengthening of Poland and the formation of a loyal American vassal on its eastern border. How successful such negotiations will be, time will tell.

If Lukashenka remains in power

Under a favorable scenario, if Lukashenka remains in power, Russia will decide everything. She will need Lukashenka as a temporary measure to stabilize the situation, he remains in power for now, and for all his “eccentricities” he will be “explained” that he has only one way out - to voluntarily and gradually surrender power. He will have to immediately announce political reform and begin preparations for it.

With his participation, the preparation of a "transfer" of power begins, the purge of the pro-Western elite and NGOs, the provision of an opportunity for the pro-Russian forces to form a real political force and nominate their leaders, from which the formation of the pro-Russian elite will begin (there are more than enough such representatives in the current elite) with guarantees of its preservation. on the political Olympus.

Belarus will have to change politically, ideologically and economically. The information agenda in the republic, which Lukashenka lost talentlessly, must undergo serious changes. Through the leaders of public opinion, the media and social networks, instead of the ideas of "Lithuanianism", it will be necessary to promote the ideas of Russian unity and integration with Russia.

The political system should become more open and competitive with real political parties and the opposition, with the state ideology of historical Russian unity, an economic basis with the preservation of strategic industries in the hands of the state, freedom for medium and small businesses, more efficient state management of industry, real integration into the Russian economy without capture Russian structures of strategic industries and the imposition of Russian oligarchic capitalism.

It will be necessary to start an open dialogue with the Belarusian society and, in order to calm it down, preserve the state elements of social protection of the population that arose under Lukashenka. It is necessary to draw conclusions from his defeat and seriously work with the younger generation, which became the driving force behind his overthrow. Prevent the transformation of young people into zealous "Banderaites", explain the advantages of integration with Russia and the collapse of Belarus in the march to the West.

At the first stage, Russia, using its right to be one of the parties to the union treaty, can become an intermediary between Lukashenka and the opposition and moderate the ideas of integration of historically connected peoples that it needs. Further, there is a long process of treatment and education of the Belarusian society, the restoration of its Russian identity, and only then - a denser integration.

The solution of the Belarus issue is part of the strategy of ensuring the security of Russia from the most dangerous western direction. The issue can be resolved only if the Russian leadership does not flirt with the "eccentric" Lukashenko, but seriously tackles the issues of state integration in the interests of the Russian and Belarusian societies, otherwise Belarus will find itself where Ukraine is now.

If Lukashenka refuses such a scenario, he will face a prison in The Hague or liquidation, and the people of Belarus will face the unenviable fate of Polish slaves instead of the “prosperity” they expect in the European expanses.