The race for the Arctic is accelerating. Whose Russian North will be? 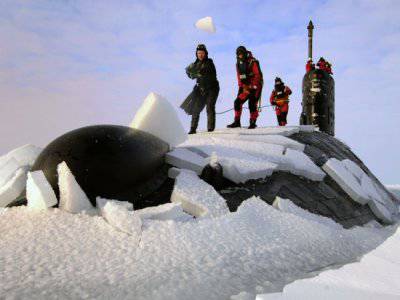 The Arctic is becoming the scene of confrontation of the largest states of the world. The natural resources concentrated here, the strategic potential can no longer be ignored. Russia more than anyone else is interested in control over the Arctic. It is possible, therefore, the events unfolding around this issue, take just the same rapid nature.

Arctic without a fight will not give up

Today, Russian Security Council Secretary Nikolai Patrushev announced that Russia will create in the Arctic along the route of the Northern Sea Route a number of facilities for the basing of warships of the Navy and the Border Service.

“A list of key dual-use facilities in remote areas of the Arctic seas along the Northern Sea Route (NSR) has been compiled, which needs to be developed in the interests of ensuring the temporary basing of naval ships (vessels) of the Naval Fleet and the Border Service of the FSB of Russia, ”Patrushev said.

Today it became known that the country intends to build an atomic icebreaker with a capacity of 2017 MW by the end of 60. For the implementation of the project cost 36,96 billion rubles will undertake Ltd. "Baltic Shipyard - Shipbuilding" - the only company capable of performing a project of this magnitude.

Earlier it was reported that "Roskosmos" began to create satellites to monitor the Arctic. The orbital grouping of the Arktika-M system will consist of two identical Arktika-M spacecraft simultaneously operating for the intended purpose. The system should also include the Arktika-M ground-based spacecraft control complex, the ground-based system for receiving, processing and distributing information, as well as the satellites and launch vehicles to launch them.

In addition, two brigades will be formed in Russia to protect national interests in the Arctic. As part of the federal target program, 20 border posts will be built, each of which will serve up to 20 people. The chief of staff of the Airborne Forces Hero of Russia, Lieutenant General Nikolai Ignatov, in an interview recently suggested the introduction of a special Arctic training in the Airborne Forces.

Recall also that in 2007, Russia resumed flights of strategic bombers in the North Pole area.

The uninitiated reader has a logical question about the reasons for such a sudden interest of Russia in the Arctic. We will answer it below, but first we will consider the actions of our competitors in the development of the region.

Our active efforts to strengthen our presence in the Arctic is a forced measure and is a response to the challenge of Western countries, louder and louder asserting their claims to the territory and its wealth.

At the beginning of this summer, a closed meeting took place in Norway between the head of the State Department, H. Clinton, and the Minister of Foreign Affairs of Norway, Jonas Store. The parties decided to jointly "set rules" for the Arctic.

Indeed, the rules for the Arctic must be established long ago. After all, the most important question - the division of the shelves according to nationality has not yet been resolved. For example, Russia claims to own the Lomonosov Ridge. In this, it is opposed by Canada, which also claims to be a ridge. As evidence of the seriousness of its intentions, this country announced its intention to build a deep-water port in the Arctic and a military base in the Canadian Far North. In addition, Canada has been conducting military exercises in the Arctic for the fifth year, the scale of which is only increasing.

You ask, and what have the United States? Washington is pursuing its own strategy for dividing the Arctic. It is expressed in the slogan “The Arctic belongs to everyone!” And consists in the internationalization of the region. Such a slogan appeals to countries that have no territorial relationship to the Arctic, and they willingly come together in a coalition around the United States.

By the way, the simultaneous buildup of the arctic programs of such states as the USA, Canada, Denmark, Norway and the possible accession of Great Britain, Iceland, Sweden, Denmark, Finland, Norway, Estonia, Latvia and Lithuania speaks about the formation of a new military alliance.

Russia's statements about the enormous contribution of our scientists and researchers to the development of the Arctic and about the longest border with it are countered by claims of unwillingness to develop it.

The usual tricks are used, they say, we do not pay attention to the education of the indigenous peoples of the North, environmental issues, etc. It is assumed that only the United States can solve these issues.

And now, in Norway, Clinton and Storey, not at all embarrassed, announced the creation of a center for the development of the Arctic, where Russia, as it is not difficult to guess, was not invited.

“... and you are right that many countries are looking at what will be the potential for exploration and production of natural resources, as well as new sea routes, and are increasingly expressing interest in the Arctic. And we want the Arctic Council to remain the main institution that deals with Arctic issues. Thus, one of the issues on the agenda, as we imagine, is the opportunity for other countries very far from the Arctic to learn more about the Arctic. These countries should be integrated within the framework of cooperation that we create and, in fact, set some standards that we would like everyone to follow, ”Clinton said.

By some estimates, the shelf in the Russian sector of the Arctic contains 51 billion tons of oil and 81 trillion. cc meters of natural gas. These reserves theoretically make it possible to maintain the level of oil and gas production achieved in 2011 for 100 and 120 years, respectively. According to American geologists, about 20% of the undiscovered world oil and gas reserves are located in the Barents Sea.

Given the impending decline in the level of oil production in Russia, shelf projects in the Arctic are of paramount importance to us. Related to this is the active promotion by Rosneft of joint projects with foreign oil corporations. Which, in turn, follows from the shortage of its own technologies for offshore oil production.

But there is one more important aspect - the early start of work on the shelf allows staking out the territory behind Russia.

However, besides the resource, the transport potential of Russia is also great. The Northern Sea Route is of great importance, but it needs to be developed. The distance from Murmansk to Shanghai along the Northern Sea Route can be completed in 22 days, and through the Suez Canal - only in 42 days. Yes, and the safety of the last route every day raises more and more questions. No wonder such a famous shipbuilder as South Korea is boosting its icebreaking program, and China is not far behind.

Another bonus from owning the Arctic is the ability to deploy missile defense systems there, which is one of the US priorities.

Privatization of the Arctic

An ambiguous assessment was caused by decisions taken at a meeting of the Government of the Russian Federation on 2 August. In its course, it was decided that mastering the Arctic without private companies will fail. Therefore, the program for developing the continental shelf up to 2030 developed by the Ministry of Environment and Natural Resources was sent back for revision.

Recall that now the monopoly on the development of the Arctic shelf is assigned to Rosneft and Gazprom.

In this case, the difference in the approaches between D. Medvedev and I. Sechin again became apparent. The prime minister insists on attracting private traders on the grounds that since 2006, the Russian monopolists have been unable to cope with the tasks entrusted to them to develop the Arctic. An example of this is the protracted problems with the Shtokman field.

However, quite recently a serious breakthrough was achieved in the form of the above-mentioned Rosneft agreements with international corporations. This allowed some experts to evaluate the initiative of Medvedev as Sechin’s personal revenge.

This version is also supported by the fact that even such an adherent of the liberal course, as Deputy Prime Minister A. Dvorkovich, spoke out on the decision of Medvedev with great caution.

Indeed, it is not clear how private companies will cope with such complex tasks, why they have not done this before and where to get them now. The most cautious people express fears that in this way penetration of foreign companies into the Russian Arctic is being prepared. After all, the government has promised unprecedented tax breaks to those working on the shelf. What could be easier than to enter the project under the guise of a Russian company, and then transfer the rights to foreigners?