Does Poland want to become great or divide again? 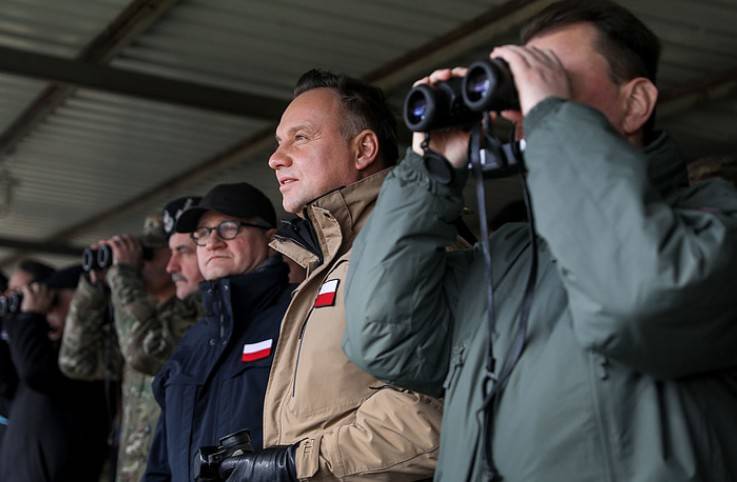 We are used to reacting to what happened. We stopped seeing how it was ripening before our eyes. Our inner vision loses its sharpness. Or acquires "specialization", it's like anyone else. Instead of seeing everything around us and reacting to dangers in a timely manner, we began to see only what we needed.


As a child, sunbathing on the bank of the village river, we often amused ourselves by playing with frogs. No, we did not stoop to bullying, we really played using the specialized vision of an amphibian. The frog's patriotism towards its native reservoir is similar to the patriotism of youth. Probably, many have heard from young people who are protesting "against everything" the classic: "What did this country give me?"

It is the same with the frog. She is completely uninterested in the beauty of her native river, talking about ancestors and how many times herons have flown in to catch all the frogs in the river. The frog is interested in flies! The more flies, the better the country, that is, the river. Therefore, she sees only what is moving.

Here we, young people, and took advantage of this disadvantage of her to play. We could make the frog jump anywhere with a simple blade of grass and a whisk. You just move this blade of grass in front of the frog's nose and in the end it decides that it is a fly. Jump, grabbing a "fly", trying to eat, hanging on a blade of grass for a few seconds and, finally, realizing that you were deceived. And instead of landing on the ground, from where the jump actually took place, the frog falls into the water or coastal silt ...

Doesn't this game remind you of the situation with some countries of the post-Soviet space and the former OVD bloc? Only "boys" and "frogs" are different. Yes, and "water" is more like waste of human life. True, in modern society there are countries that for some reason decided that the "frogs" can also play with other "frogs".

Poland is one of these countries. Warsaw more and more often finds itself at the epicenter of international politics in Eastern Europe. Moreover, the political elite of this country for some reason decided that today it is she who is the leader of all the "humiliated and oppressed" countries of the former Soviet bloc. The Poles are confident that their "elder brother" in the person of the United States will always help them.

What this belief is based on is not entirely clear. The United States showed its attitude towards this country quite recently, during the exacerbation of the coronavirus pandemic. As, however, the attitude towards all of Europe. For Americans in Europe, there is only one country to speak to: Great Britain. The rest should be told how to live.

Today we see how Polish politicians create a “union of the offended”. It is difficult to name the "Lublin Triangle" in another way. Warsaw, Vilnius and Kiev are the most important capitals of Europe today. Wherever there is Berlin, Paris or London ... We quite correctly perceived such a union as the formation of a triangle of hatred towards Russia.

But this triangle is directed not only to the east, but also to the west! I would call it a triangle of hate for the successful. Simply because this triangle will not be limited to stamping anti-Russian resolutions of the OSCE. Very soon, resolutions against the FRG, France and other countries of "old Europe" will appear. "Young Europeans" need to grow somewhere.

Where roots grow from

If someone is waiting for another excursion into history, alas, it will not be. So many works of eminent historians have been written on this topic that any of the readers will be able to read a lecture on this issue on their own. I'm more interested in modernity. What happened before our eyes yesterday. Happened, but went unnoticed for the majority.

Let's remember 2019. The Poles deliberately did not invite Putin to events marking the beginning of World War II. Further - the speech of our president, in which he reasonedly, with documents, outlined his own version of the start of the war. Remember the howl that began not only in Poland, but also in other countries, including old Europe? The Europeans really did not like the truth about who and how started the war and who was “very friendly” with whom in the first years of the war.

How did the scandal with a different interpretation of historical events end, which I very much doubt? And it ended with a resolution of the European Parliament of September 18, 2019, equalizing fascism and Stalinism. The invaders and liberators were equalized! Thus, the Europeans changed history by their own decision. And now it is quite legal, just like Europeans, to destroy monuments to our soldiers on their territory.

Alas, but, in my opinion, the very fact that we forgot these events behind the routine of world problems, decided that this could wait until later times, played a cruel joke not only with Russia. Regrettably, it can play a "joke" on a global scale. And the inspirer of all this mess, the country that started rewriting history, can once again either disappear or turn into a dwarf.

The history of mankind is the history of wars. No matter how much we wish not to believe it, but it was wars that often pushed the winners to economic and political progress, and the defeated ones to disappear or be forgotten for many years and even centuries. How many empires have been on Earth during the existence of mankind? How many once great peoples now live in countries that do not play a big role in world politics?

Today the strike of the Polish elites is directed at Russia. Some sins of our ancestors, which offended poor Poles many centuries ago, are remembered, and more often invented. The sins of their ancestors are hushed up at the same time. Warsaw is trying in every way to defeat us diplomatically. Well, the attempt is not torture. Moreover, we have fully prepared our "diplomats in uniform" for such conversations.

But I'm interested in something else. For all this political fuss and the creation of the next anti-Russian get-togethers, the Poles for some reason completely forgot about their western neighbor. About Germany. When there is talk about the territories once "captured" from Poland by the Russians, most Poles burn with noble anger and demand the return of the Polish lands. But when you ask about the German lands that were transferred to Poland after the Second World War, the standard answer follows: but the Germans do not ask us about this ...

Meanwhile, in Germany, quite a few people today speak openly about this. On the restoration of historical justice and the return of "historically German lands". The cat scratches on its back. Boomerang returns. The policy that the Poles use against their eastern neighbor is growing in Germany against its eastern neighbor!

I am far from thinking that today there is at least one world leader who dares to start a world war. The understanding that this war will be the last in the history of mankind dictates its methods of struggle in the international arena. The army today really fulfills the function of the protector of peace. Those regional conflicts that exist are rather an exception to the general rule than a pattern. Like fights between courtyard boys.

The modern world is complex. Multi-tiered, diverse, poor and rich ... Most countries are fine with this state of affairs. Small countries in cooperation and alliance with large ones feel great and develop sometimes even faster than big allies. Big countries are in charge of world politics and also consider it normal. Even countries that have fenced off from the rest of the world by some political or ideological boundaries are quite happy.

But this whole idyll ends when someone decides to change their place in the world alignment of states. Poland today largely exists at the expense of the US and the EU. This is the same beggar on the porch who needs to be given a pretty penny before Sunday sermon. Not to give to earn, but simply to give. This is a tradition. Moreover, this beggar has been sitting on the porch for a long time. Others come and go, and this one sits. Sometimes he even talks to parishioners after the service.

Only now he does not ask, he begins to demand his own pretty penny! Begins to express his "fi" to those who have been feeding him for many years. And he absolutely does not care how much the nursing person earns, how he is doing. Give, give, give! ..

I even know how it will end. There will be one parishioner who kicks the impudent person from the porch.

The policy that Poland is pursuing today will lead to just such a kick in the future. And perhaps to the next "undressing" of the impudent person. The return of donors' belongings ... The Polish government has not yet understood this. But time teaches well. And the experience, especially the negative one, is sobering for several generations. Life goes on…

Ctrl Enter
Noticed oshЫbku Highlight text and press. Ctrl + Enter
We are
Results of the week. “In our cooperative, the board is always agreed”Results of the week. "God forbid to see Russian revolt, senseless and merciless!"
60 comments
Information
Dear reader, to leave comments on the publication, you must to register.