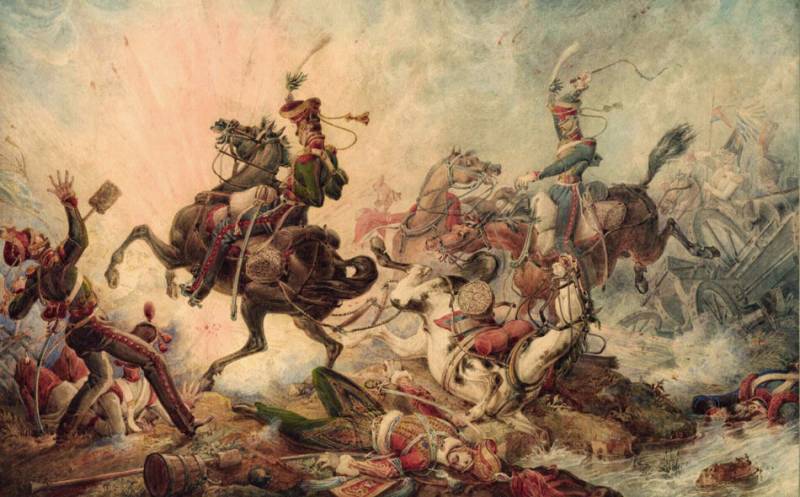 This was seen and depicted by the English artist William Heath

Soldiers, brava guys,
Where are your sisters?
Our sisters are lances, sabers are sharp,
That's where our sisters are.
Russian military drill song, widely known in the XIX - early XX century

On the floor beneath him was a wide rug covered with colorful arabesques; another Persian carpet hung on the wall opposite the windows, and on it were pistols, two Turkish rifles, Circassian checkers and daggers.
M. Yu. Lermontov. Princess Ligovskaya

Weapon 1812 year. As for edged weapons, there is a special conversation. After all история it had been counted by the time of the outbreak of the war with Napoleon for ... thousands of years, while firearms - some pitiful four centuries! Therefore, it is not surprising that in the Russian imperial army, as, indeed, in the army of Napoleon, and in all other armies of the world, edged weapons were in service with both the infantry and the cavalry, but only for the latter it was at that time the main one, and here in the infantry (we are, of course, not talking about rifle bayonets) it was auxiliary. 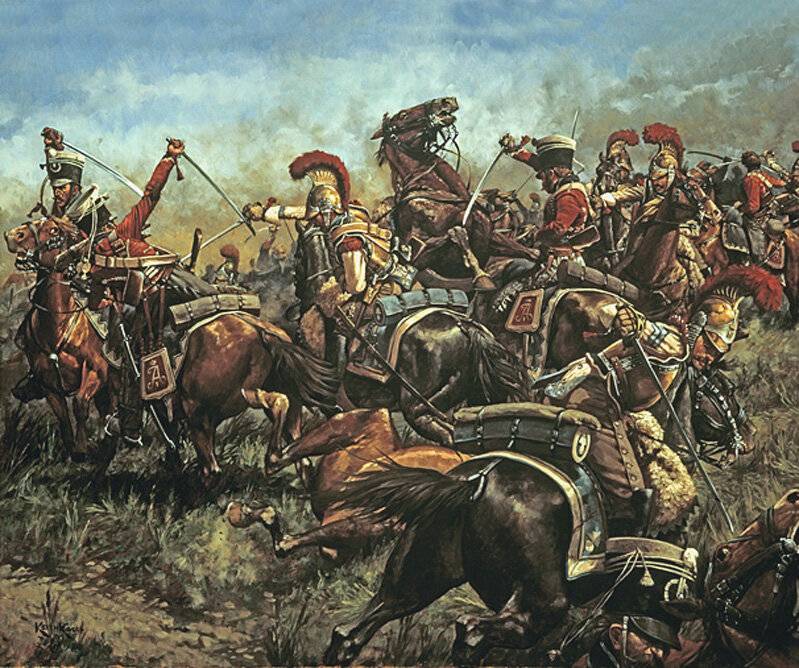 The 1st carabinieri regiment of the French army fights with the hussars of the Izyum regiment during the Battle of Borodino. Rocco Keith artist
Well, we will begin the story about the melee weapons of the Russian infantry, as well as foot artillery and engineering troops from the officer's - the most beautiful and expensive. In 1812, it was an infantry sword model of 1798, which had a single-edged straight blade 86 cm long and 3,2 cm wide. Its total length was 97 cm, and its weight, including the scabbard, was 1,3 kg. Ephesus was wooden, but beautifully wrapped in twisted wire, had a metal pommel and a metal guard.

The privates and non-commissioned officers of the infantry, as a cold weapon, had a cleaver of the 1807 model with a leather sheath, on a moose leather sling, which was worn over the right shoulder. Single-edged blade 61 cm long and 3,2 cm wide, cast brass hilt. Length 78 cm, weight 1,2 kg. A lanyard made of braid with a brush was attached to the hilt. Moreover, the color of the braid mattered: it meant the company and the battalion, but the brush in the infantry was entirely white. In the engineering troops in 1812, a sapper cleaver of the 1797 model was used, which had a blade not straight, but curved in shape, 50 cm long and up to 8,5 cm wide, the butt of which had a saw cut. Ephesus is a simple wooden handle with an iron cross with the ends bent towards the point. It was about 70 cm long and up to 1,9 kg in weight. The scabbard is made of wood, covered with black leather, with a metal device. It could be used both as a combat weapon and as a trenching tool.

The Cossack troops in 1812 (except for the Cossacks of the Guards regiments) were armed with sabers of an arbitrary design, which often passed from hand to hand by inheritance and belonged to fathers and grandfathers. The most accessible for the Cossack was the light cavalry saber of 1809, well, it is clear that the Cossack families kept a lot of captured weapons: Asian, Hungarian, Polish sabers ... The scabbard was the simplest, wooden, leather-covered, with a copper or iron device. 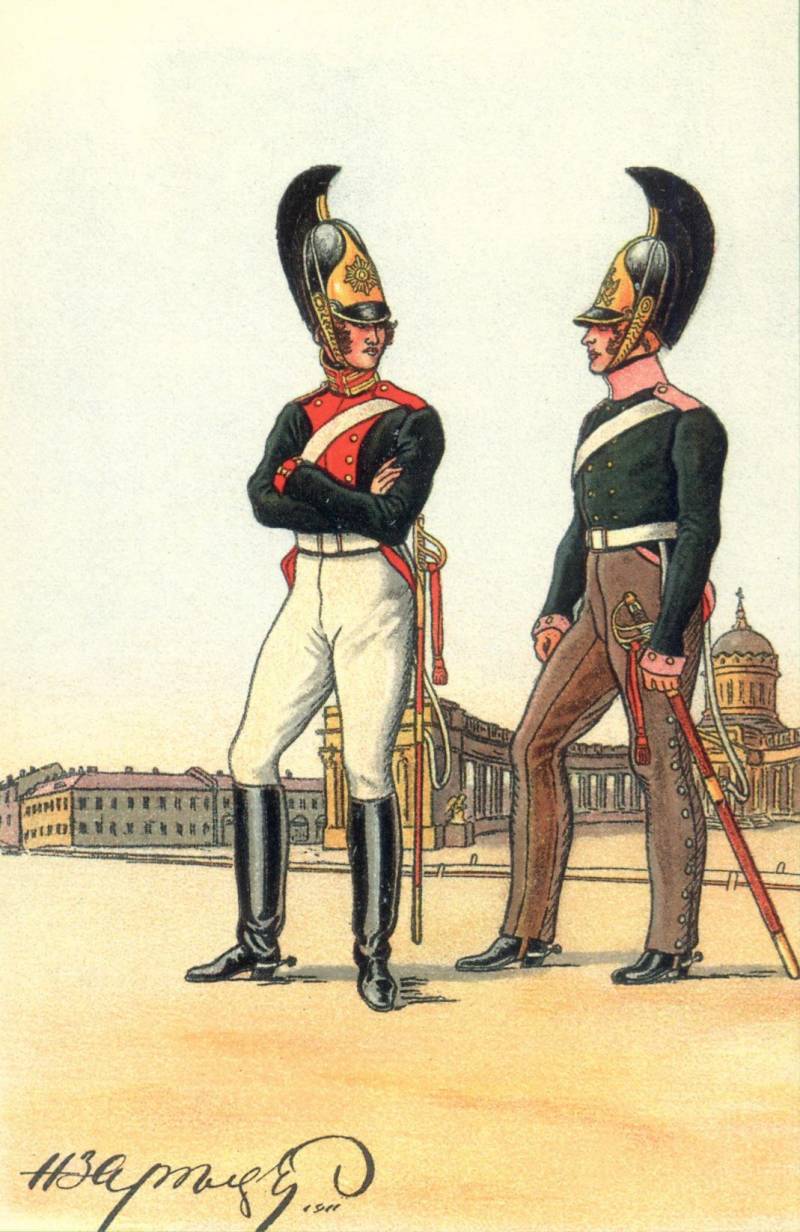 Private of the Life Guards of the Dragoon Regiment (dress uniform) and a private of the St. Petersburg Dragoon Regiment (marching uniform). Artist N.V. Zaretsky. 1876-1959. Russian army in 1812. SPb., 1912
In the Russian heavy cavalry in 1812, the sword was a combat weapon. Moreover, there were several types. So, the dragoons used the broadsword of 1806, again in a wooden scabbard covered with leather and with a metal device. The blade of such a broadsword had a length of 89 cm, a width of up to 38 mm and a total length (with a hilt and in a scabbard) 102 cm and a weight of 1,65 kg. But old samples of the end of the 1811th century were also in use, and even the "Caesar" (Austrian) broadswords, which in XNUMX entered the dragoon regiments from the Moscow and Kiev arsenals. 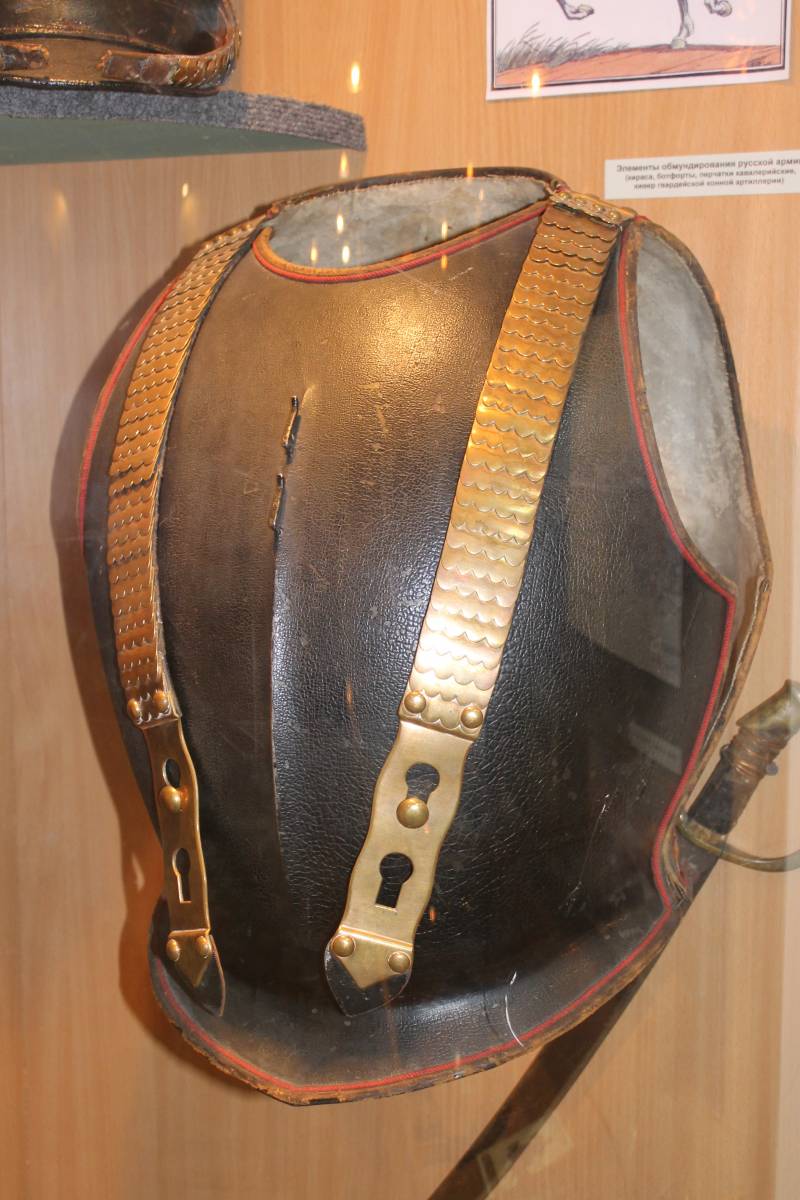 Cuirassiers had two types of broadswords at once: army and guards, samples of 1798, cavalry guard of 1802 and 1810 with a metal sheath and two rings for attaching harness belts. The sword blade of 1798 had a length of 90 cm, a width of about 4 cm and a guard with a cup, four protective bows and a pommel of the handle, designed in the form of a bird's head. The sword was 107 cm long and 2,1 kg in weight. So it was heavier than even another medieval sword. The cuirassier broadsword of 1810 was longer: 111 cm (blade 97 cm) and the design of the hilt. The officer's broadsword was also provided. So, the officer's cuirassier broadsword of the 1810 model had a blade 91,5 cm long and a total length of 106,5 cm. The handle was not straight, but somewhat curved along the saber. 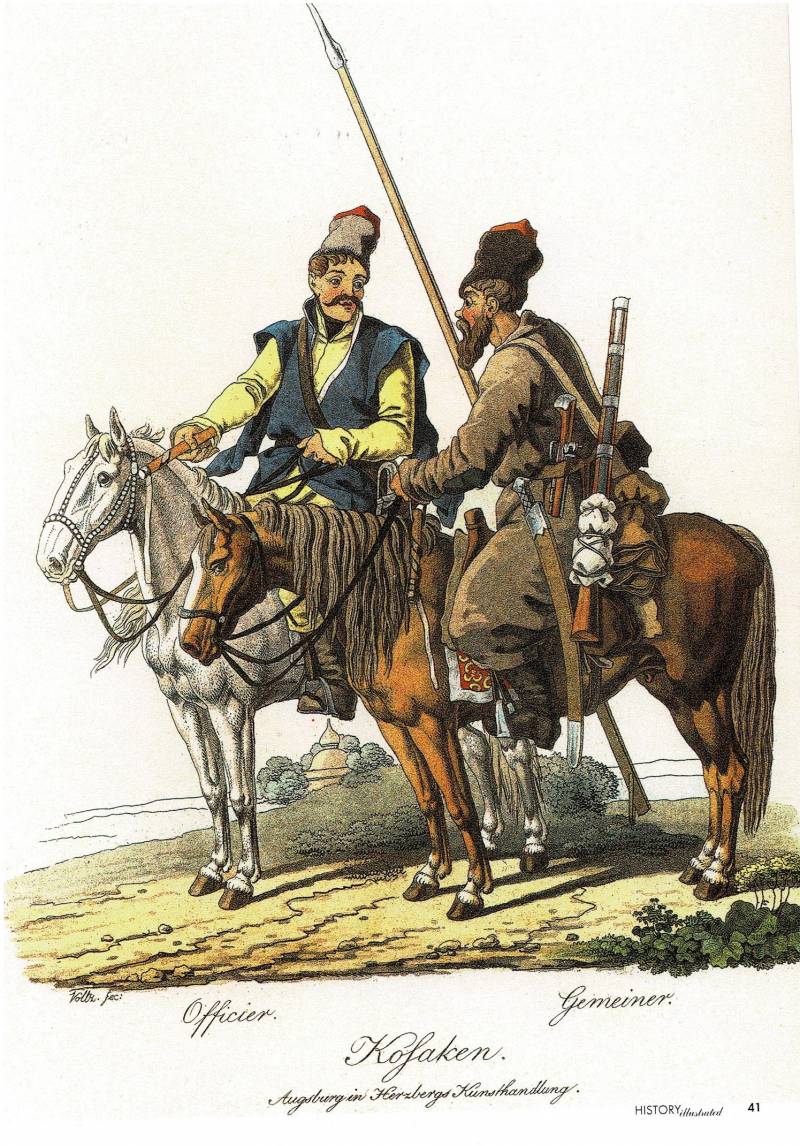 Cossack and Cossack officer. Engraving by J. Wolz, 1810s State Historical Museum, Moscow
Light cavalry from the era of the Napoleonic Wars used sabers from 1798 and 1809. The first had a wooden scabbard covered with leather, with a metal device that covered almost their entire surface, and the skin was visible only in the slots. The second could have a metal sheath. The total length of the saber was about one meter, with a blade length of 87 cm and a width of up to 4,1 cm. The saber of the 1809 model by 1812 had almost replaced the previous model. The length of her blade was 88 cm, the width was up to 3,6 cm with a reduced curvature of the blade. Weight - 1,9 kg, total length - 107 cm. That is, this weapon was also not an easy one, and to wield such a saber well, considerable physical strength was required.

Pica - a cavalry weapon rooted in the depths of centuries, was also in service with the light cavalry of the Russian Empire in 1812-1814. The Cossacks were traditionally armed with pikes, but their size of the steel tip, and the length and diameter of the shafts were not regulated in any way. Whoever wanted with what lance, he fought with such. But the differences from the army peaks among the Cossacks were very noticeable: the latter did not have veins at the tip and an inflow at the bottom of the shaft. In 1812, the pikes were in service with the cavalry regiments of the provincial militia, and often this was their only weapon. 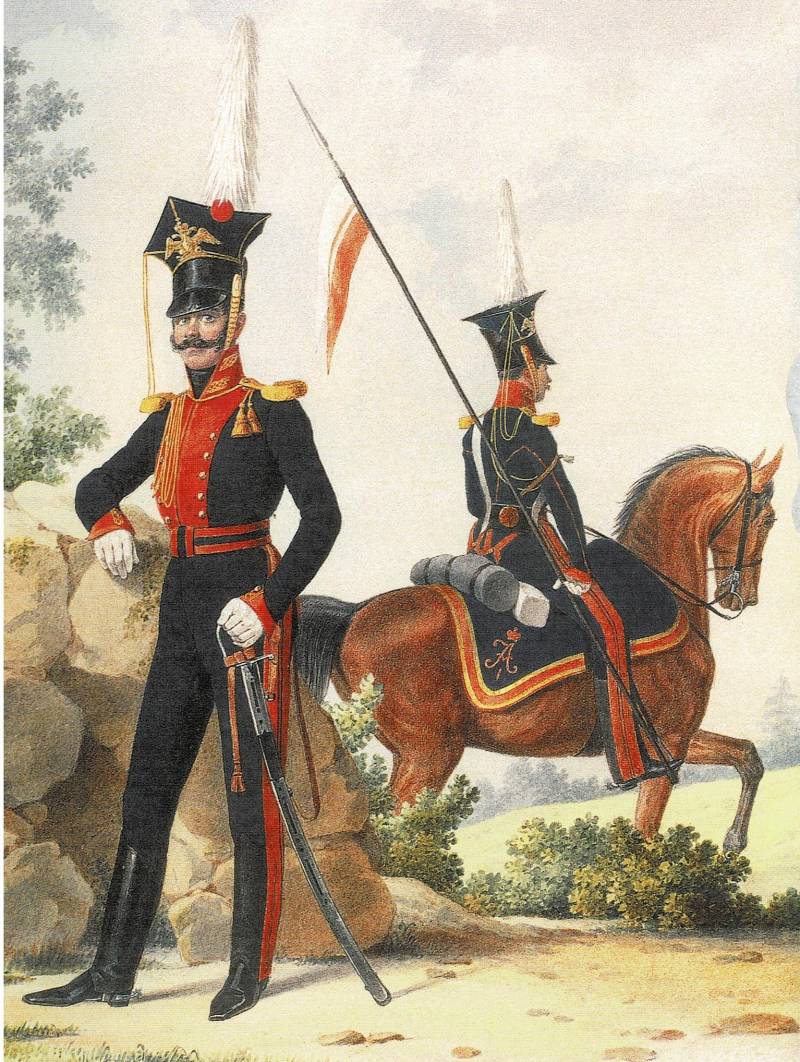 Privates of the Ulan Regiment Life Guards 1809-1811. Lithograph of the 1840s. Museum of artillery of engineering troops and signal troops, St. Petersburg.
As for the Lancers' cavalry, they received lances in 1806. It differed from the Cossack's with a long tip (12,2 cm) and a blunt flow. The shaft was painted black and was thinner than that of the Cossacks. The length averaged 2,80-2,85 m. The main difference between the lancers' peak was the cloth flag (weather vane), by the color of which the regiment was determined, and inside the regiment itself - the battalion. During the attack, these weathercocks emitted a whistle and hum from the incoming air. They often write that they had a strong mental impact on the enemy. But ... the thunder of cannon shots, rifle fire, stomping and neighing horses didn't drown him? So this is a rather controversial statement, especially when it comes to battlefields. Also, until the summer of 1812, the peaks of the Uhlan-style, albeit without weathercocks, had the hussars of the first rank of eight regiments out of 12. In this regard, one can often come across statements that during the Patriotic War the Russian cavalry in this regard was superior to the cavalry of the Napoleonic army ... But it is unlikely that the presence of the peak was already so decisive, otherwise they would have been armed with all the cavalry of Europe. While nowhere is it noted that it was the Uhlan cavalry that dominated the battlefield then. Although in the battle of Gutshtadt with Nadezhda Durova, the following incident occurred: “... I saw several enemy dragoons, who surrounded one Russian officer and shot him down from a horse with a pistol. He fell, and they wanted to chop him down. At that very moment I rushed towards them, holding my lance at the ready. One must think that this extravagant courage frightened them, because at the same moment they left the officer and scattered apart. " That is, the dragoons did not dare to contact the piqued Russian lancer, but decided to retreat, despite their numerical superiority. But what played the main role here - her peak or her courage (perhaps both), alas, can no longer be said.

It is important to note that in the Russian army of that time, it was edged weapons that were used not only in battle, but also as a reward for officers. There are two types of such award weapons: "golden weapons" (swords and sabers with a gilded hilt) and Annenskoye (swords and sabers with the insignia of the Order of St. Anna, 3rd class). Since 1788, they have been awarded with golden swords and sabers with the inscription “For Bravery” on the shackle of the guard. Moreover, the headquarters and chief officers of the army and fleet just a weapon with an inscription and a gilded hilt was supposed to, the generals received swords and sabers with diamonds and the inscription: "For bravery", but the commanders of armies or individual corps were awarded weapons in addition to diamonds, decorated with golden laurel wreaths, and the inscription made on them also contained the date and the name of the battle site. Paul I canceled the awarding of such a weapon. However, by decree of November 18, 1796, it was stipulated that the order of St. Anna class 3 should be worn on the hilt of infantry swords and cavalry sabers of gentlemen officers. 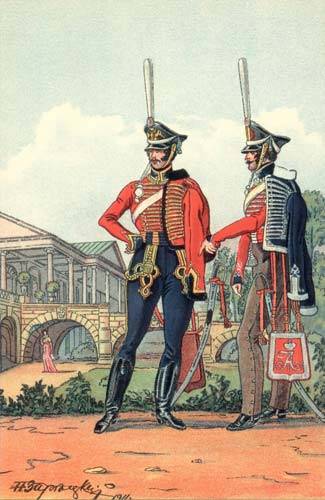 Private of the Life Guards Hussar Regiment. Formal dress. Private Izyum hussar regiment. Hiking form. Artist N.V. Zaretsky. 1876-1959. Russian army in 1812. SPb., 1912
Alexander I decided to resume the awarding of golden weapons, and by decree of September 28, 1807, he equated the officers who were awarded with golden weapons to the holders of Russian orders. In 1812, 274 people received golden swords and sabers, and 16 golden weapons with diamonds - 1812. The most massive award of junior officers was the Annenskoye weapon, which in the same 968 was awarded to XNUMX people. Interestingly, in the Napoleonic army, edged weapons were very similar to our Russian, with the only noticeable difference that the handles of the sapper's hatchets of the guards sapper units were cast from brass and for some reason ended in a cock's head. 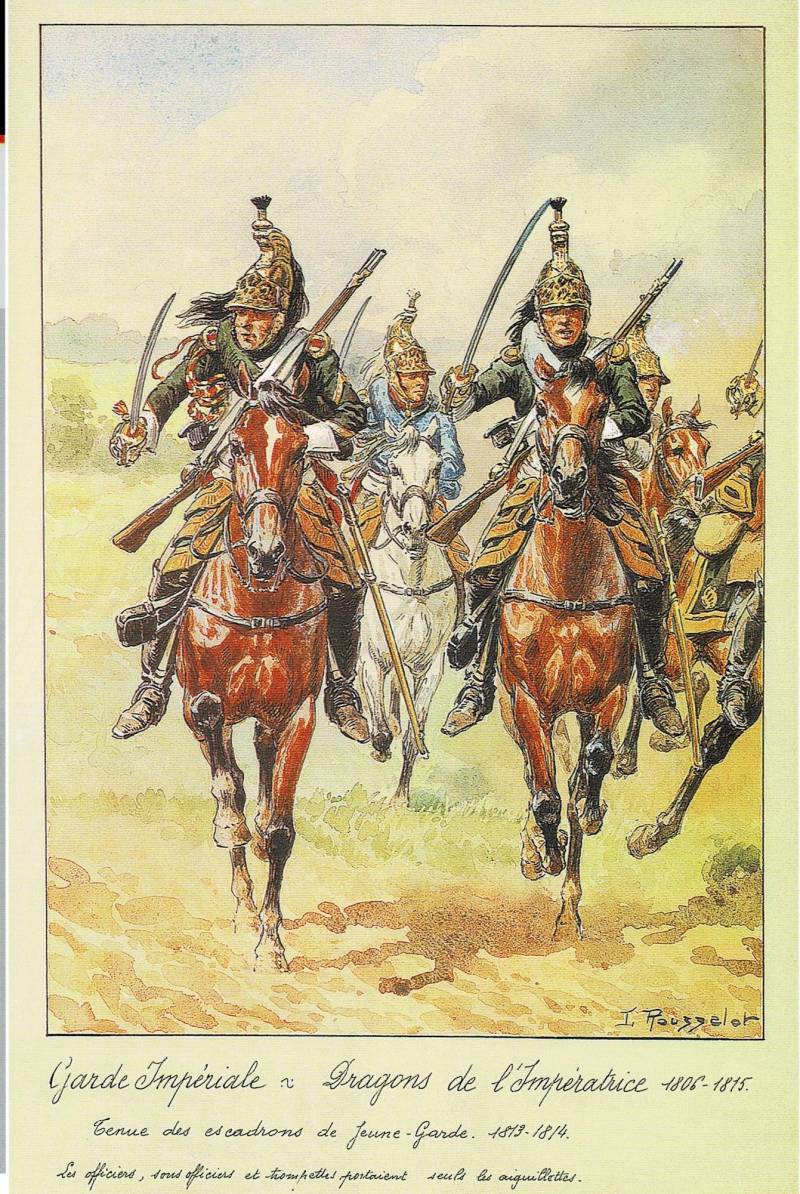 Imperial Guard. Dragoons of the Empress. 1806-1815 Young Guard uniform, 1813-1814 Illustration by Lucien Rousselo
It can be concluded that in military-technical terms, the Russian and French armies were practically equal in all respects, therefore the victory in the war of 1812 can be called connected to the greatest extent with economic and ... psychological factors. The one who had more reserves and whose soldiers were braver, in the end he had to win this war!

Author:
Vyacheslav Shpakovsky
Articles from this series:
Year XNUMX artillery
Pistols of the war of 1812
Thunderstorm of the twelfth year. Shotguns