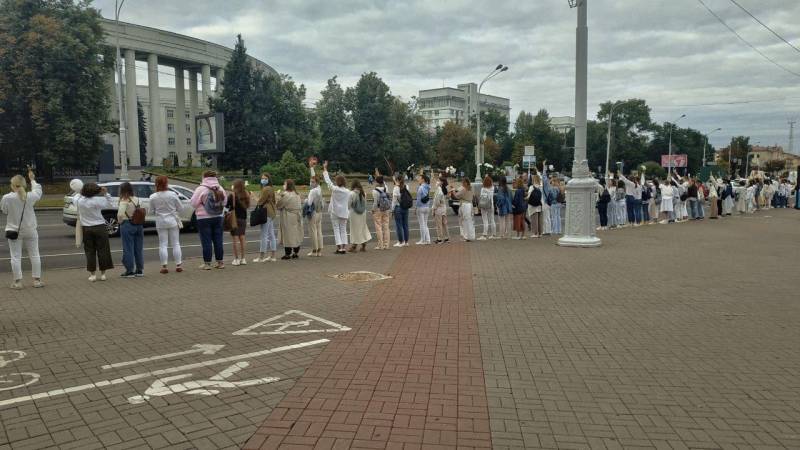 Protests in Belarus have taken on some kind of chaotic form. At night, security officials and radicals go hunting for each other. Moreover, even this hunt does not look really frightening. The lawlessness caused by the employees of the Ministry of Internal Affairs, and there is no other way to characterize quite a few shots of beating up really random people, played a role. The inhabitants are intimidated, the evening Minsk has become depopulated.


During the day, "women in white" take to the streets. They stand beautifully along the highways and wave flowers. Why are they worth? And no one really will tell you why. Exactly as none of the radicals will say why he went out into the street and gets into a fight with the riot police. These stories of stolen votes that would have played any role in the elections are unconvincing.

"Luca, go away!" Interestingly, with what joy should he leave? Does anyone doubt his victory in the elections? I'm not talking about the number of votes, but about the fact that the majority of the people elected him. The timid voices of those who are trying to raise the issue on the topic "the majority were against" are silenced by the protesters themselves. What's next?

It's a shame that such an intelligent people came out to play with death or freedom. Let's remember how play differs from work? I understand, the question is childish, but still. What is important when doing the job? Result! What is important in the game? Process! The game teaches work, instills the skills necessary for work. What did we see in the protest videos? Besides the protests themselves, of course?

Two by two! The fact that Lukashenka won the election in accordance with the Constitution of Belarus is a fact. He won regardless of our attitude towards him and the attitude of the citizens of Belarus. Even the most stubborn oppositionists do not deny this. Yes, he used the resource of power, yes, he removed his competitors, yes, he deprived voters of the right to choose. But the elections took place! People came to the sites and chose! So there was a choice for these people!

This means that the violent removal of Lukashenko will legally be a coup d'etat! A group of protesters forcibly replaces the president chosen by the majority of the people! And then it is understandable why the leadership of the Ministry of Internal Affairs applies tough measures to suppress the actions of the protesters. The words of the Minister of Internal Affairs' apology for the "inconvenience" of illegal detentions are understandable. The good old saying from the times of Yezhov's reign: when they cut wood, chips fly.

At the same time, hatred of Lukashenka among the people is growing rapidly. The country is small. Detention and bullying of detainees in pre-trial detention centers are quickly becoming the subject of conversation in every kitchen. Is there a way out in this situation?

Let's consider a simple Belarusian family. Hypothetically, of course. With a high degree of probability, I would say. So, grandfather, father and grandson are at the table. Grandfather, a Soviet man, for whom a break with Russia is inconceivable, is unambiguously for the republic's joining the Russian Federation.

The father, although born in the USSR, actually lived his entire adult life after the collapse of the Union. Visited the Baltic "extinctions", in Russia, in the Ukraine. As an accomplished person, he believes that Belarus should be a union state for Russia. Its own small country, which successfully lives on the sale of its goods to the huge market of the Russian Federation, on transit, on tourism and so on.

Grandson. Born and raised during the era of Lukashenka's rule. For him, the USSR is as distant as, for example, the Roman Empire or Ancient Greece. Russia? And what is Russia to him? How is it different from the Baltics, where he goes for the weekend with his girlfriend? Russia's only advantage is its open border. But a friend from Lithuania or Latvia also has an open border. But to many countries. It turns out that life in Lithuanian is better. Freer ...

Note that in this purely hypothetical family, I did not touch on economic issues at all. Simply because a person remembers about the economy only when the economy remembers about a person. Remember the Ukrainians of 2014? Not “Maydauns”, but ordinary, normal Ukrainians who went to work when tires were burned on the Maidan. Someone then thought that in 5 years it was possible to destroy huge concerns, destroy factories, practically kill the entire economy of the country?

This family comes out to protest. In full force. Simply because this power got everyone. So what? What do they want? Why did they come out to risk their health, and maybe their lives? What is the purpose of the protests?

This is exactly what we see today in Belarus! That is why I call this protest a game. We protest against all that is bad and speak for all that is good. It was like that already. And not far from Minsk. In Kiev. Or someone might say that the Ukrainians went out to make their state the poorest country in Europe?

Is there a way out of this impasse? Is there an idea that can unite grandfather, father and grandson? Maybe there is. But what she is, only they have to decide. Only Belarusians. In short, a referendum is needed on where the country wants to go. Does she want to become part of Russia? Does she want to maintain independence and become part of the Union State? Or is it necessary to turn towards the West?

It's a shame to look at people who don't even understand why they are being beaten. It is a shame to look at the security officials, who are horrified at orders to beat everyone in a row - just beat them so that it would be discouraging to protest. It's a shame and a pity. But, dear and beloved Belarusians, the time for sitting on two chairs is over. The time of the “wise father of the entire Belarusian people” is over. You have matured! Belarus has matured! The time has come to decide your future destiny on your own.

I understand it's scary. If you decide for yourself, then you are responsible for everything yourself too. But the time has come. A national referendum is urgently needed, which would determine the further path of the country's development in the coming years, decades, and maybe centuries.

Ctrl Enter
Noticed oshЫbku Highlight text and press. Ctrl + Enter
We are
About Stalin and KhrushchevWhat you didn't want to know about England
Military Reviewin Yandex News
Military Reviewin Google News
173 comments
Information
Dear reader, to leave comments on the publication, you must to register.