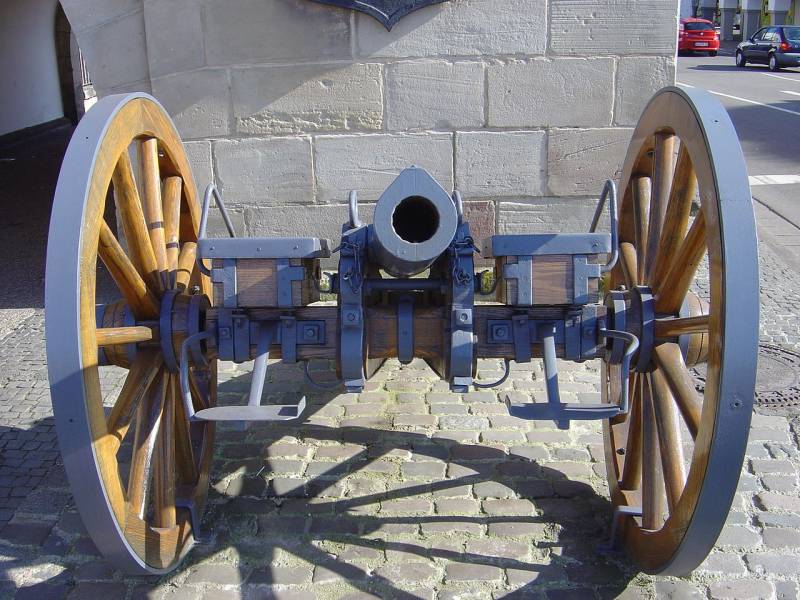 In the middle of the XIX century. new artillery systems, created on the basis of the most modern technical solutions, began to enter service with the European powers. Thus, the Prussian army received several field guns, collectively known as the "Krupp guns". They showed very high technical and combat characteristics, and also determined the directions for the development of German artillery for the next few decades.

The Prussian program for the development of promising field guns with increased characteristics started in the first half of the forties. The first few years were spent on preliminary study and search for promising technical solutions. In 1851, experiments began with different prototypes, and by the middle of the decade they formed the main provisions of future projects. 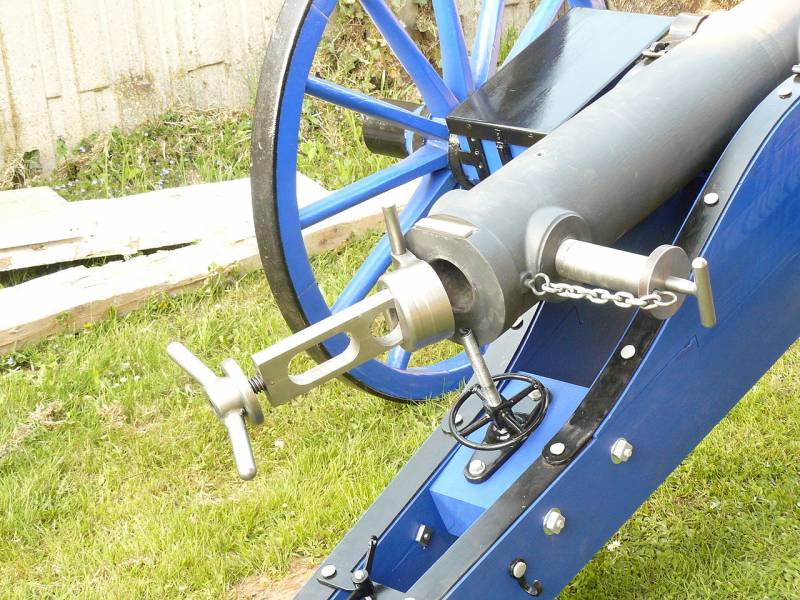 Warendorf bolt on gun mod. 1861 open
These were rifled breech-loading systems with a high-strength barrel and progressive gate designs. Provided for the use of shots with a metal sleeve and shells for various purposes.

In the shortest possible time, through the joint efforts of Krupp and Arsenal Spandau, mass production of new guns was established. For several years, the manufacturers were able to assemble and supply several hundred guns to the army, providing a radical rearmament and a significant increase in firepower. In parallel, work was underway on new samples.

The Krupp Cannons were first brought to the field of real battles during the Franco-Prussian War of 1870-71. The backbone of French artillery was then muzzle-loading smooth-bore systems, which were inferior to Prussian guns in range, accuracy and fire power. In this regard, it is the progressive guns that are considered one of the factors that ensured the victory of Prussia. The subsequent unification of Germany was also not without modern artillery. 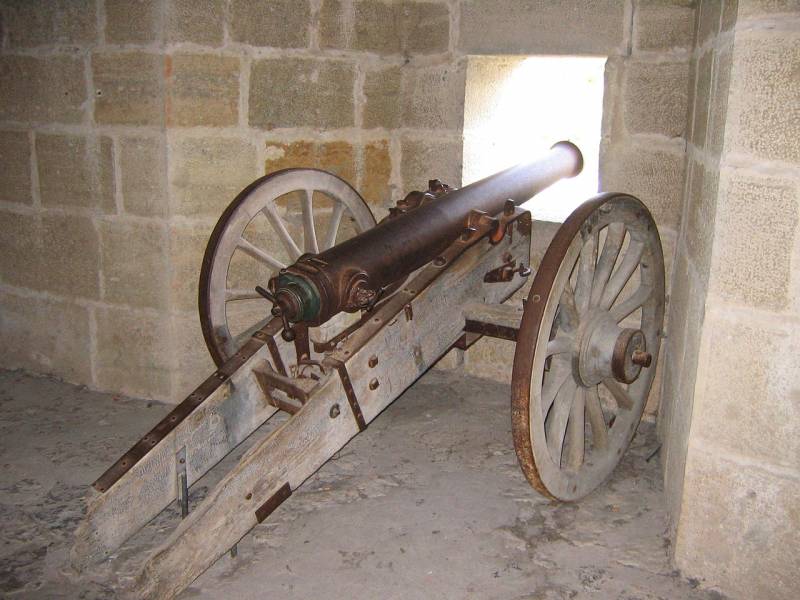 A similar cannon with a closed bolt

On the way to the six pounder

In the fifties, various experiments were carried out, the purpose of which was to find optimal designs, materials, etc. The result of this process was the 6-Pfünder-Feldkanone C / 61 cannon. Later, research continued, as a result of which significant changes were made to the finished design - and a new series of guns appeared.

From the very beginning, it was required to create a rifled gun capable of showing increased range and accuracy. Experiments have shown that a barrel of this kind with an acceptable resource cannot be made of cast iron or bronze. At the same time, there was already experience in the manufacture of steel barrels, and the Krupp company possessed the necessary technologies. She was ordered to manufacture experimental and then serial guns.

The final version of the barrel was made of steel and was approx. 2 m and caliber 91,5 mm. The channel provided for 18 grooves 10,5 mm wide and 1,3 mm deep. Outside, on the barrel, rudimentary sights were provided for direct fire. 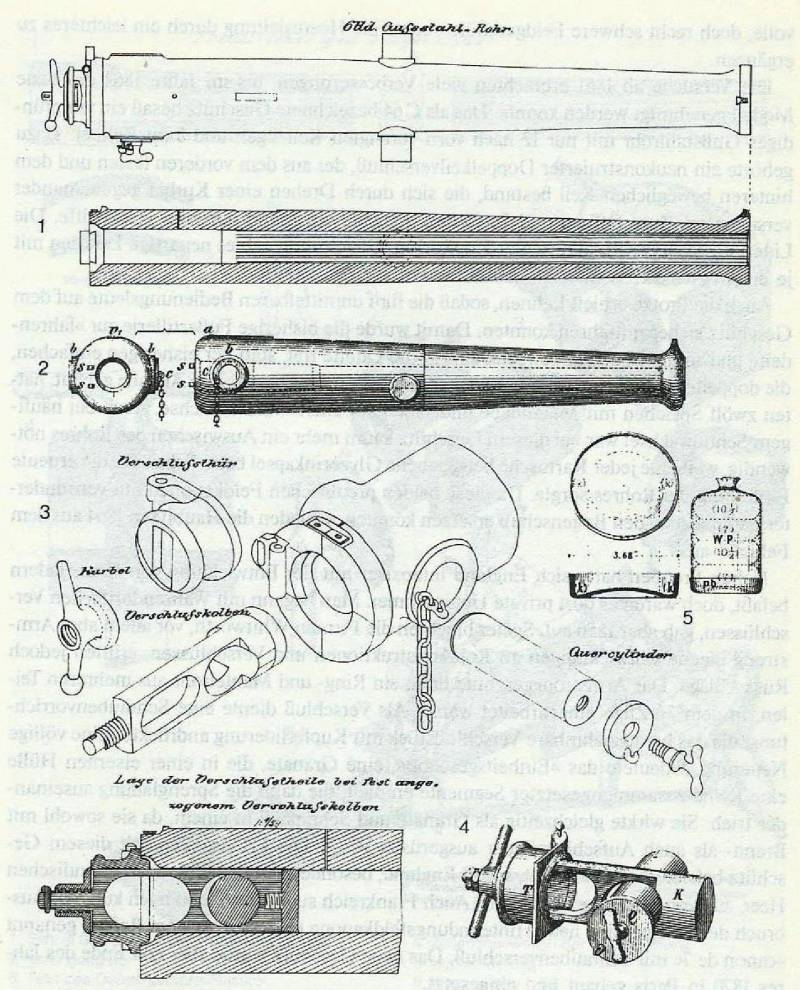 Details of the Warendorf bolt cannon
For the first gun, the so-called. Warendorf shutter. It consisted of a piston that locked the bore and a transverse wedge that entered the bore and piston holes. This design provided a simple and quick reloading, however, it could pass powder gases. Because of this, the ammunition had to add its own obturator disk.

The gun could use shots of separate loading with a total propelling charge of 600 g. There were fragmentation and incendiary grenades, shrapnel and grape-shot charges. When using a grenade, the maximum firing range reached 3700 m. For buckshot - no more than 300 m. Standard rate of fire - 6 rounds per minute; a trained calculation could do up to 10.

Guns mod. 1864 retained some of the features of its predecessor, but had serious differences. The main thing is the design of the shutter. The Warendorf system was considered impractical and was replaced by the so-called. shutter Krupp. This was an early version of a manual horizontal wedge gate. 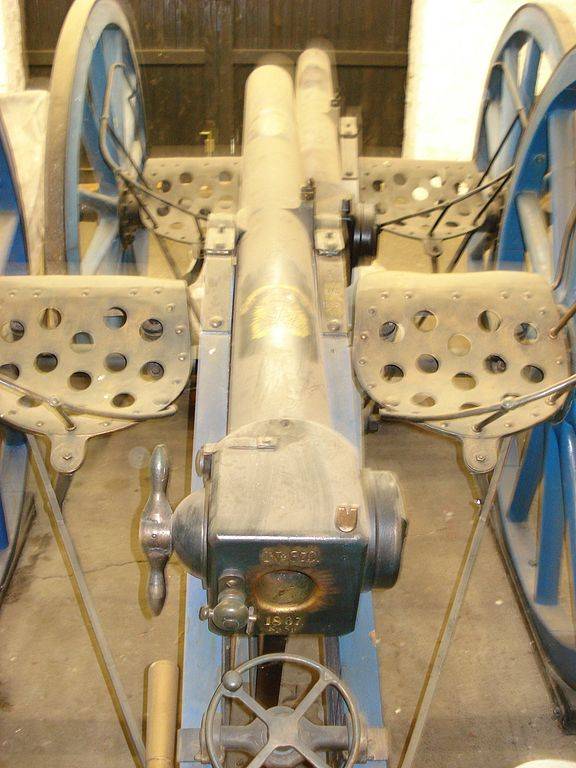 Weapon mod. 1864 wedge breech
In the rectangular breech of the barrel, windows were provided for installing the shutter, which consisted of two moving parts. To lock the parts, they were introduced inside the breech, after which they were displaced relative to each other and rested against the windows. The control was carried out by a side flywheel. Such a shutter was easier to manufacture and operate, and also provided better locking and obturation.

The main part of the improvements affected the barrel group, but there were other changes. The old wooden carriage has undergone a deep modernization with the widespread introduction of metal parts. We also improved guidance mechanisms and other elements.

By improving the barrel and bolt, it was possible to increase the combat characteristics. So, the 6-pounder gun mod. 1864, using standard grenades, could fire more than 4 km. Four-pounders 1864 and 1867 with a caliber of 78,5 mm, the firing range was similar to the gun of 1861, but had a number of serious advantages. 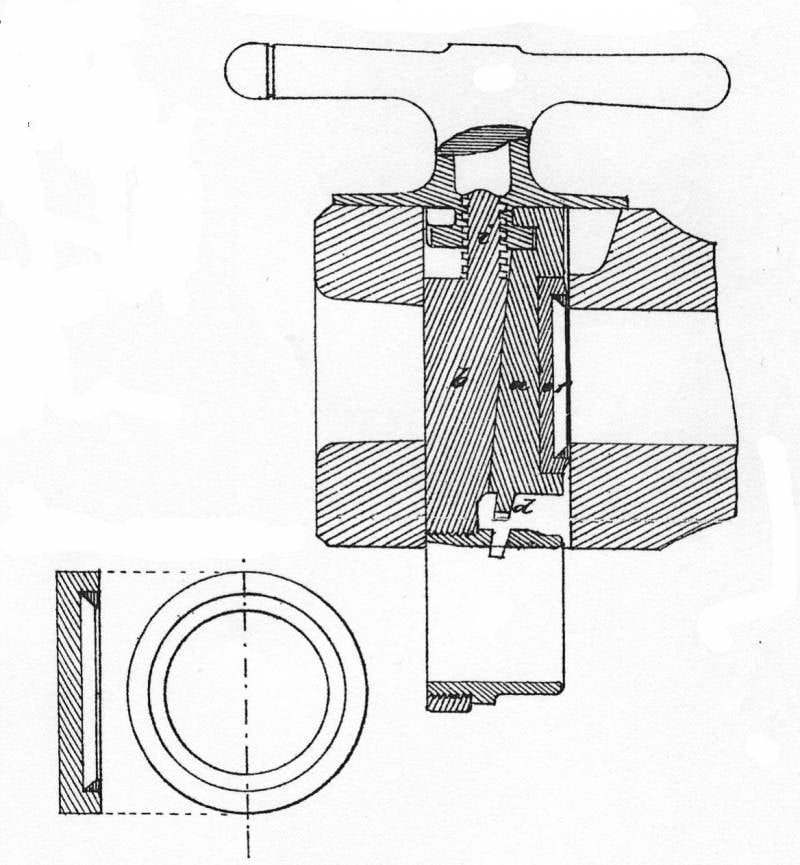 Four "Krupp's guns" of the sixties of the XIX century. were the first artillery systems in the Prussian army with a rifled barrel and loading from the treasury. Practice has shown that such a design has serious advantages and is capable of providing superiority over the enemy. The development of ideas continued, and they began to be combined with new solutions.

Soon, new field weapons for various purposes appeared, based on existing developments. Later, new ideas were used in naval and coastal artillery. The subsequent development of guns and the creation of new designs also did not go without the legacy of the "Krupp guns".

Rifled steel barrels have become the standard for decades. German gunsmiths abandoned this idea only when developing modern smooth-bore tank guns - however, the field guns remained rifled. A shot with a propelling charge in the sleeve also became a common feature of all the main classes of artillery. German guns of the XNUMXth, XNUMXth and XNUMXst centuries are also united by the use of a predominantly horizontal wedge breechblock. 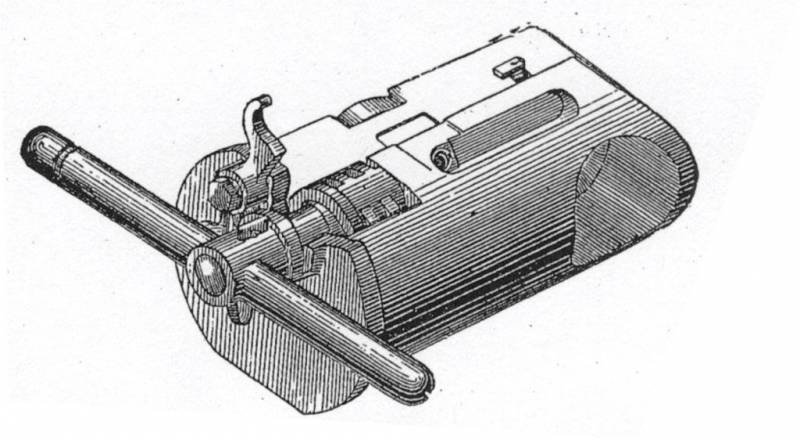 Improved Krupp bolt 1867
However, we are talking only about general technical solutions. For a century and a half, the designs of the units have been improved, and new devices have been created. New materials were introduced to optimize the ratio of weight and size and combat characteristics. The most important innovation of the last century was the installation of guns on self-propelled platforms. Finally, the guns for the German army in all its forms were made not only by Krupp.

Prussia and Germany actively traded their weapons with high performance. In some cases, foreign buyers not only used these guns, but also developed their own weapons based on them. Thus, the "distant descendants" 9cm Stahlkanone mit Kolbenverschluß, etc. many modern designs can be considered.

However, one should not forget that other countries worked on the creation of promising artillery systems simultaneously with Prussia and Germany. These or those developments also went into series, received development and gave workable ideas for new projects. As a result, a very interesting picture emerges: even the most modern tools of progressive designs in one way or another go back to projects of the mid-XNUMXth century. However, the similarities have long been limited to only the most general ideas, and the merits of the gunsmiths of our time are no less than their colleagues in the past.