Do you need problems? You need an aircraft carrier! 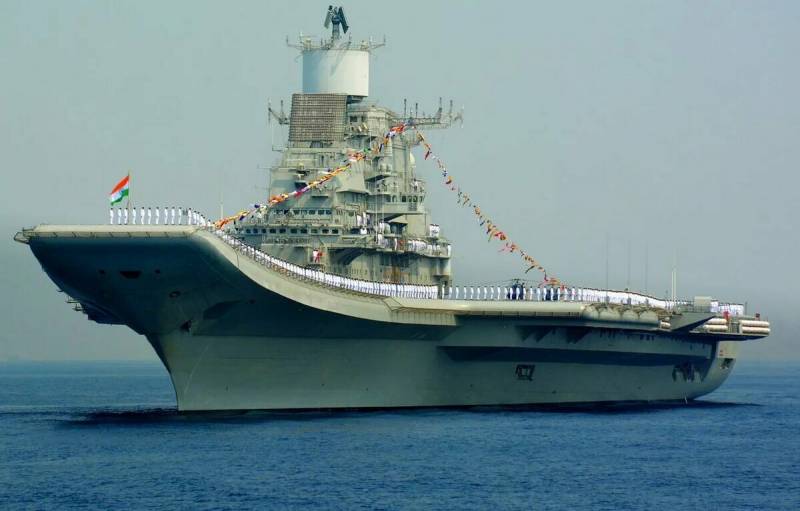 Who, if not the Americans, can judge foreign aircraft carriers? Indeed, they are experts in this type of ships the best in the world.


Kyle Mizokami of our beloved The National Interest has given a very interesting picture of India's carrier ambitions. Kyle is generally a very good specialist, with humor, therefore it is always interesting to read him. Not everything can be agreed, so we will correct Kyle on occasion. Italicized.

Like many other countries, India wants the best weaponthat she can afford. But ideological and financial concerns mean there are many things she won't buy in the United States or Europe. This is largely indicative of Russia.

India has been a major buyer of Russian weapons for 50 years. These were not easy years for New Delhi. India's defense contracts with Russia have consistently suffered delays and cost overruns. And the equipment received doesn't always work.

Actually, Russian military equipment is working. Is always. Even if it is not exploited in the most proper way, but here's something, our equipment has always been normal with its performance.

Cost overruns ... You know, here it would be better for the Americans to keep quiet. If Mr. Mizokami cited as an example at least one of the Pentagon programs over the past 10 years, which cost the originally requested amount, it would be very interesting to get acquainted with such information.

Of all India's troubles with Russian purchases, none speaks more of the dysfunctional relations between the two countries than the saga of the Vikramaditya aircraft carrier.

In the early 2000s, India went to market for a new aircraft carrier. The Indian military wanted a new ship to replace the old Viraat, and no one was going to create a military-industrial nightmare. It happened.

But it all started a little earlier.

In 1988, the Soviet Union commissioned the aircraft carrier "Baku". These ships were a masterpiece of Soviet design. The forward third resembled a heavy cruiser with 12 giant SS-N-12 anti-ship missiles, up to 192 surface-to-air missiles, and two 100mm deck guns. The remaining two-thirds of the ship was an aircraft carrier with an inclined flight deck and hangar.

"Baku" served for a short time in the Soviet naval navyuntil the USSR collapsed in 1991. Russia inherited the ship, renamed it "Admiral Gorshkov" and kept it on the lists of the new Russian fleet until 1996. After the boilers exploded, probably due to lack of maintenance, "Admiral Gorshkov" went into naphthalene. 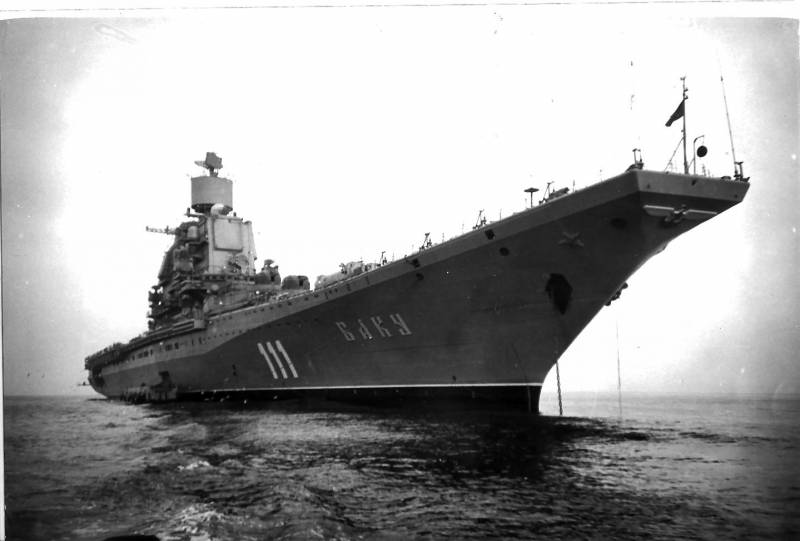 In general, at first this vessel was called "Kharkov". The only TAVKR project 1143.4. He made his only exit to the sea in 1988, performing tasks in the Mediterranean Sea. After this campaign, he anchored in Severomorsk, where he stayed until 1999, when preparations began for the sale of the ship to India. On February 1, 1992, there really was an accident that killed 6 people. Fire in the aft engine room.

In the early 2000s, India faced a dilemma. The only aircraft carrier in the Indian fleet, Viraat, was due to retire in 2007. 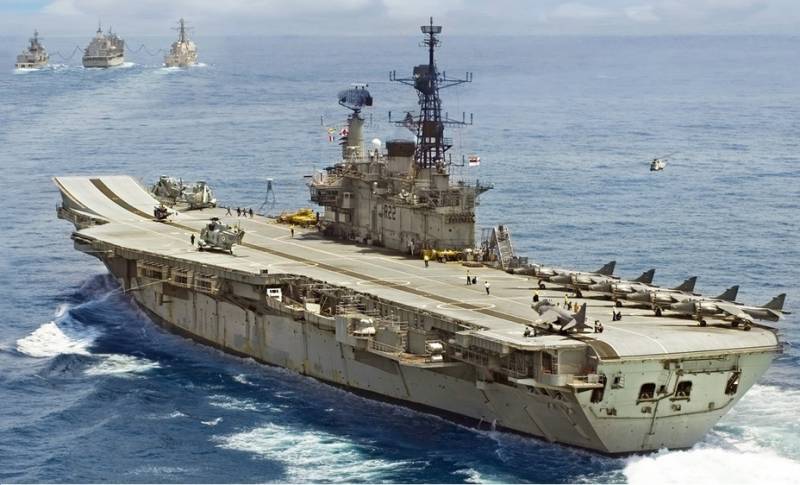 Aircraft carriers are helping India assert its influence in the Indian Ocean, not to mention being status symbols. New Delhi needed to replace Viraat, and quickly.

India's options were limited. The only countries building aircraft carriers at the time, the United States, France and Italy, were building ships too large for an Indian checkbook. In 2004, India and Russia struck a deal for India to receive Admiral Gorshkov. India will pay Russia $ 974 million for its modernization in excess of the sale.

Russia was to turn the ship into a working aircraft carrier with a launch ramp and flight deck just over 900 feet long, with an air group of 24 MiG-29K fighters and up to 10 Kamov helicopters.

The ship, according to the agreement, will be replaced with new radars, boilers, aerofinishers and deck lifts. All 2700 rooms and compartments located on 22 decks will be renovated and new wiring will be installed throughout the ship. The "new" carrier will be named "Vikramaditya" - after the ancient Indian king.

"Real aircraft carrier for less than a billion dollars" sounds too good to be true. And so it turned out.

In 2007, just a year before delivery, it became clear that the Russian Sevmash plant would not be able to meet the agreed deadlines. What's more, the plant required more than double the money, $ 2,9 billion in total, to complete the job.

The cost of sea trials alone, which originally stood at $ 27 million, has grown to a fantastic $ 550 million.

Required comment. Where the $ 550 million figure came from is somewhat unclear. The contract clearly stated that $ 974 million for repairs and $ 530 million for the supply of 16 MiG-29K fighters and Ka-31 and Ka-27 anti-submarine helicopters.

The ship was to be delivered to the customer at the end of 2008. However, the Indians themselves stalled the case, paying only about $ 458 million. And when payments were suspended, then, accordingly, the Russian side raised the issue of indexing and underestimating the amount of work.

Sevmash specialized in the construction of submarines and had never worked on an aircraft carrier before. The ship was originally built at the Nikolaev shipyards, which after the collapse of the Soviet Union became part of Ukraine. The rigging and specialized equipment on which the Admiral Gorshkov was built were thousands of kilometers away, and now in a foreign country.

In fact, the rigging and equipment were completely useless, because the ship, as it were, had already been built. But another question is that the personnel who built the aircraft-carrying cruiser, who knew every rivet, remained in Ukraine - it is difficult to argue with this. Yes, Sevmash had enough of its own cool specialists, but specialization ...

With half the terms of the deal and a loss of $ 974 million, India could not afford to backtrack. Russia knew this and was straightforward about the options for India. "If India does not pay, we will keep the aircraft carrier," RIA said.News"One of the officials of the Ministry of Defense.

By 2009, the project had reached a dead end. Russian arms exports in 2009 amounted to only $ 8 billion, and Sevmash's delays and extortionary tactics did not benefit the Russian defense industry as a whole.

Let's be honest: India did not lose $ 974 million. The costs for the first time were 478 million, and 516 were stuck. As well as 550 million for the planes. There is nothing to pity the "poor Indians", because forgive me, but the principle "money - commodity - money" has not been canceled.

Of course, half a billion dollars in comparison with 8 billion in general is also a lot, but here it is more interesting that the underpaid Indians did not in any way affect the general state of affairs.

In July 2009, then Russian President Dmitry Medvedev made a high-profile visit to the Sevmash plant. Indian news reported that the carrier was still half ready, which meant that the shipyard did not actually do any work on the ship for two years as it was holding on to a lot of money.

In 2010, the Indian government agreed to more than double the aircraft carrier's budget to $ 2,2 billion. This was less than Sevmash needed ($ 2,9 billion) and much less than the $ 4 billion market price offered by Sevmash.

Suddenly Sevmash magically began to work harder, in fact twice as hard, and completed the second half of the upgrade in just three years. Vikramaditya finally went to sea trials in August 2012 and was commissioned by the Indian Navy in November 2013.

At the commissioning ceremony, India's Defense Minister Mr. Anthony expressed relief that the test was over, telling the press that there was a time "when we thought we would never get it."

Now that Vikramaditya is finally in service, India's troubles are over, right? 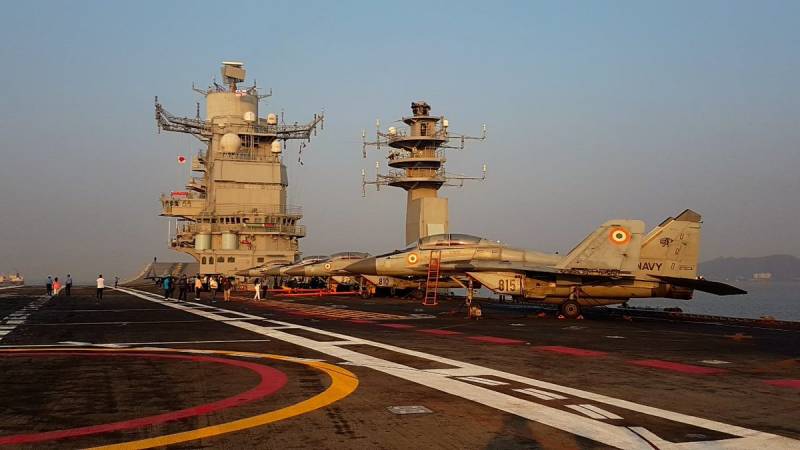 In no case. Incredibly, India chose Sevmash to carry out non-warranty work on the ship for the next 20 years.

Providing spare parts for Vikramaditya is an important task in itself. Ten Indian contractors helped complete the aircraft carrier, but also over 200 other contractors in Russia, Croatia, Denmark, Germany, Italy, Japan, Finland, France, Norway, Poland, Sweden and the United Kingdom. Some countries, such as Japan, most likely did not even know that they were exporting parts for a foreign weapon system.

The ship's boilers, which provide the Vikramaditya with power and propulsion, represent a long-term problem. All eight boilers are new. But Indian sailors found defects in them. During a trip from Russia to India, a boiler broke down on the ship.

It is worth saying here that even if they acquired something from someone in the dark, the Indians did not lose anything. If you bought something in the United States - well, yes, it makes sense to express dissatisfaction with the American. And this will not give the Indians any problems at all, since India is not under sanctions, and even if something breaks, problems are unlikely to arise.

India could install local versions of the Russian AK-630 cannon system, but the Vikramaditya will have to rely on the new Indian air defense destroyer Kolkata to defend against aircraft and missiles.

Here's not to blame stupidity in such an article - you know, like a hot dog without ketchup and mayonnaise. All offensive weapons were removed from the Vikramaditya, and the ship was turned into a normal light aircraft carrier.

The Basalt anti-ship missile system, both AK-100 100-mm gun mounts, the Udav-1 anti-torpedo missile defense system, and AK-30M 630-mm anti-aircraft guns were removed from the ship. Also dismantled anti-submarine sonar system "Polynom" and anti-aircraft missile systems "Dagger". All this for the sake of lengthening the runway.

If the Indians decide to protect an aircraft carrier with aircraft and an air defense destroyer, this is their own business.

And what about Sevmash? After the Vikramaditya fiasco, the plant is oddly optimistic about building new aircraft carriers and has identified Brazil as a potential buyer. Sevmash wants to build aircraft carriers, said Sergey Novoselov, deputy general director of the plant.

Well, in those years, even we wrote about it. However, the fact that Sevmash CAN in principle build a "promising" aircraft carrier does not mean at all that it will be so in reality. We can all do something like that. In principle / in perspective. But reality is often very different from reality. 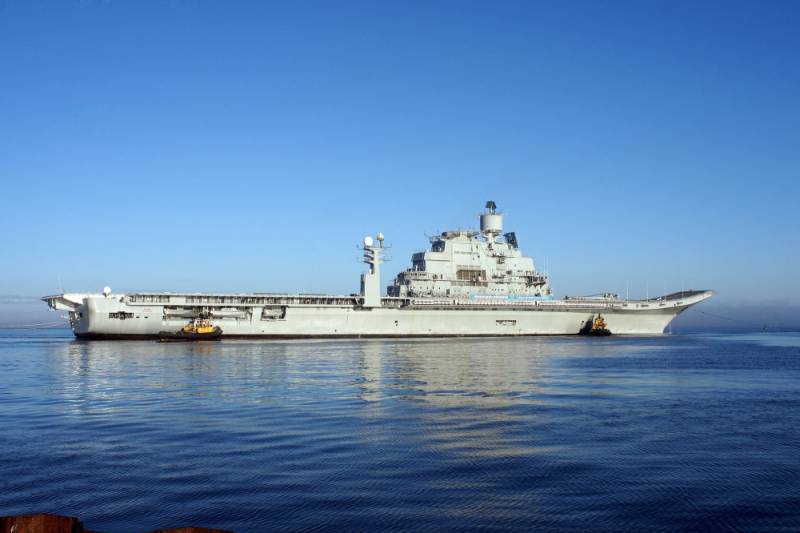 But история does not know the subjunctive mood.

Kyle Mizokami wrote a pretty objective story. And the essence of this story is clear and understandable: India should not have played the fool with the old Soviet cruiser, but had to take out a loan and purchase a ship from the United States. How the Indians bought their first aircraft carrier from Great Britain.

However, this case can be quite rightly regarded as an economic example. When you really want an aircraft carrier, but there is no money for it, American ships are ... somewhat expensive. Especially for India.

No matter how perfection the American aircraft carriers are (sarcasm), the examples of China and India have shown that it is not worth spending as much money on a floating airfield as the Americans spend.

You can suffer with such strange partners as the Russians, but as a result you can get at your disposal a ship capable of performing the tasks assigned to it.

A very instructive story. Especially from the pen of an American.

For those who like to read in the primary source:
India's Biggest Military Mistake: Buying a Russian Aircraft Carrier.

Ctrl Enter
Noticed oshЫbku Highlight text and press. Ctrl + Enter
We are
Defective aircraft carriers are not suitable for the Russian fleetThe National Interest: What if the two best submarines in the world go to war?
Military Reviewin Yandex News
Military Reviewin Google News
66 comments
Information
Dear reader, to leave comments on the publication, you must to register.