Development of tank shells based on depleted uranium 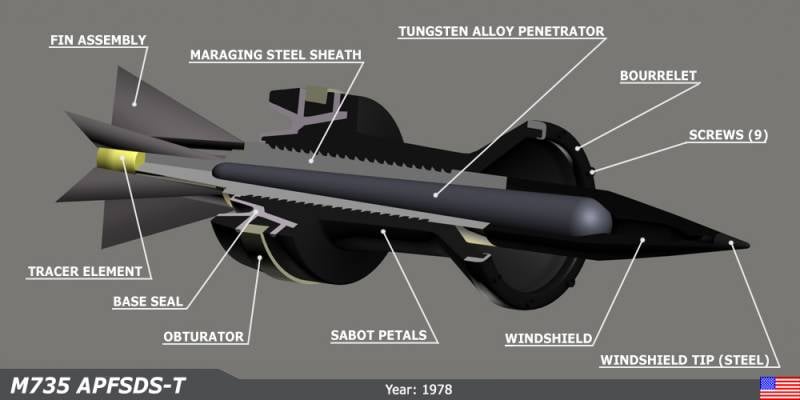 Scheme of the American M735 projectile in the basic configuration. The upgraded M735A1 differed only in the core material. Figure Steelbeasts.com

The ammunition load of a number of modern main combat tanks includes armor-piercing sub-caliber projectiles with a core of depleted uranium and its alloys. Due to the special design and special material, such ammunition is capable of showing high combat characteristics and therefore is of great interest to the armies. However, only a few countries are still developing such shells.

When developing the future M1 Abrams MBT, the American industry faced the problem of further increasing penetration. For use on the tank, a 105-mm rifled M68A1 gun was offered, the ammunition of which no longer had a serious reserve of characteristics for the future. In the late seventies, this issue was resolved through the development of new BOPS, which were put into service in the eighties.

In 1979, the M735A1 projectile was developed and tested - a version of the M735 product with a uranium core instead of a tungsten core. Despite the advantages over the previous model, this BOPS was not accepted into service. Then the more successful M774 projectile appeared. During the eighties, 105-mm BOPS M833 and M900 with higher characteristics were adopted. 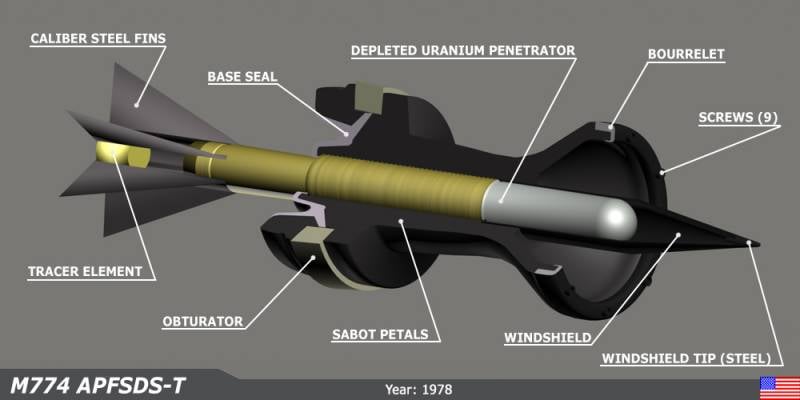 M774 product schematic. Figure Steelbeasts.com
In the course of the development of 105-mm armor-piercing shells, it was possible to obtain sufficiently high characteristics. The initial velocity has reached or exceeded 1500 m / s. Later uranium cores pierced 2-450 mm of homogeneous armor at a distance of 500 km. It was believed that this is enough to combat modern tanks of a potential enemy.

The modernization project for the M1A1 tank provided for the replacement of the 105-mm cannon with a more powerful 120-mm smooth-bore gun M256. For the latter, a new generation BOPS with higher characteristics was created - M829. In the course of its development, it was decided to finally abandon the tungsten damaging element in favor of a more effective uranium one.

The M829 product received a core 627 mm long, 27 mm in diameter and weighing about 4,5 kg, complemented by an aluminum head fairing and tail assembly. The muzzle velocity was increased to 1670 m / s, which made it possible to increase the penetration to 540 mm per 2 km. The base M829 was put into service along with the M1A1 MBT. 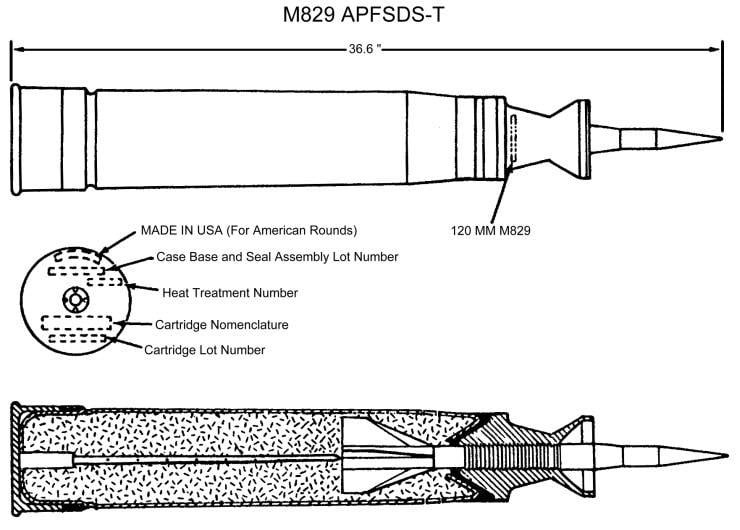 Shot with BOPS M829. Noteworthy is the short length of the projectile. Figure Inetres.com
By the early nineties, the M829A1 projectile was created and adopted, which received a new core. The 4,6 kg uranium rod had a length of 684 mm and a diameter of 22 mm. The initial speed was reduced to 1575 m / s, but penetration exceeded 630-650 mm, and the effective range increased to 3 km.

Already in 1994, an improved version of the M829A1, the M829A2, appeared. Due to the introduction of new technologies and materials, it was possible to increase the initial speed by 100 m / s and increase the armor penetration. In addition, the mass of the shot has been reduced in general.

At the beginning of the 829s, the M3A800 BOPS appeared, designed to destroy objects with reactive armor. This problem is solved due to the composite core, including the "leading" steel element and the main uranium. The total length of the core increased to 10 mm, and the weight to 1550 kg. With an initial speed of 700 m / s, such a projectile is capable of penetrating at least 2 mm of armor from XNUMX km.

M829A2 split layout. US Army Photos
To date, serial production of the latest BOPS model for the M256 gun has been launched under the designation M829A4. A characteristic feature of this product is the maximum possible length of the core, which made it possible to increase its mass and energy parameters - and, consequently, the parameters of penetration. The M829A4 is intended for use by M1A2 tanks with SEP upgrade packages.

The American industry took up the topic of tank uranium BOPS in the mid-seventies, and at the beginning of the next decade, the first production samples went to the army. In the future, the development of this direction continued and led to interesting results.

The introduction of depleted uranium allowed the US Army to solve several problems at once. First of all, it was possible to obtain a favorable ratio of the size, mass and speed of the projectile, which had a positive effect on the fighting qualities. When creating the M735A1 BOPS, the increase in armor penetration was less than 10% compared to the tungsten M735, but then more successful samples with a different increase in characteristics appeared. 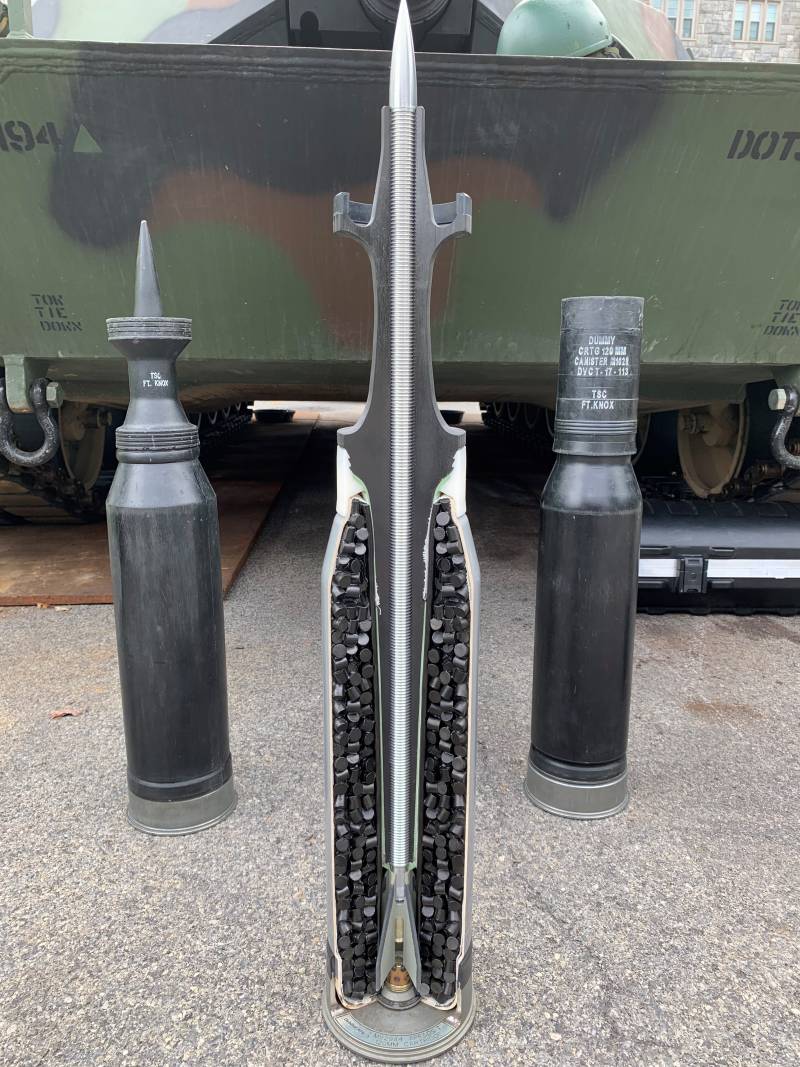 The most modern BOPS for the M256 is the M829A4. Photo Sturgeonshouse.ipbhost.com
Then the transition to 120 mm caliber began, which made it possible for a new increase in performance. The first sample of the M829 family could penetrate 540 mm - significantly more than the 105 mm predecessors. Modern modifications of the M829 have reached the level of 700-750 mm penetration.

Soon after the United States, the topic of uranium shells for tank guns was taken up in several countries, but only in the USSR and Russia such projects were fully developed. Several such BOPSs have been put into service and new ones have been reported.

In 1982, the Soviet Army received the 125-mm 3BM-29 "Nadfil-2" projectile for the 2A46 gun. Its active part was made of steel and carried a uranium alloy core. Penetration from 2 km reached 470 mm. According to this parameter, the 3BM-29 was ahead of other domestic developments with other cores, but the advantage was not fundamental.

Shell 3BM-46 with a master device. Photo Russianarmor.info
In 1985, a monolithic uranium projectile 3BM-32 "Vant" appeared. A striking element with a length of 480 m and a mass of 4,85 g at an initial speed of 1700 m / s could penetrate 560 mm of armor. A further development of this design was the 3BM-46 "Lead" product, which appeared in the early nineties. By lengthening the core to 635 mm, the penetration capacity was brought to 650 mm.

In recent years, a new generation of tank BOPS has been developed. So, there is a new projectile 3BM-59 "Lead-1". According to various sources, from a distance of 2 km, it is capable of penetrating at least 650-700 mm of armor. There is a modification of this ammunition with a tungsten core. New shots are also being developed for the promising 2A82 gun and larger caliber systems. It is assumed that some of these projects involve the use of uranium alloys.

Thus, the Soviet and Russian industry took into account their own and foreign experience, which resulted in the consistent creation of several BOPSs with a uranium core. Such ammunition was a good addition to the existing tungsten rounds, but could not supplant them. As a result, the ammunition load of Russian MBTs may include different shells with different characteristics. 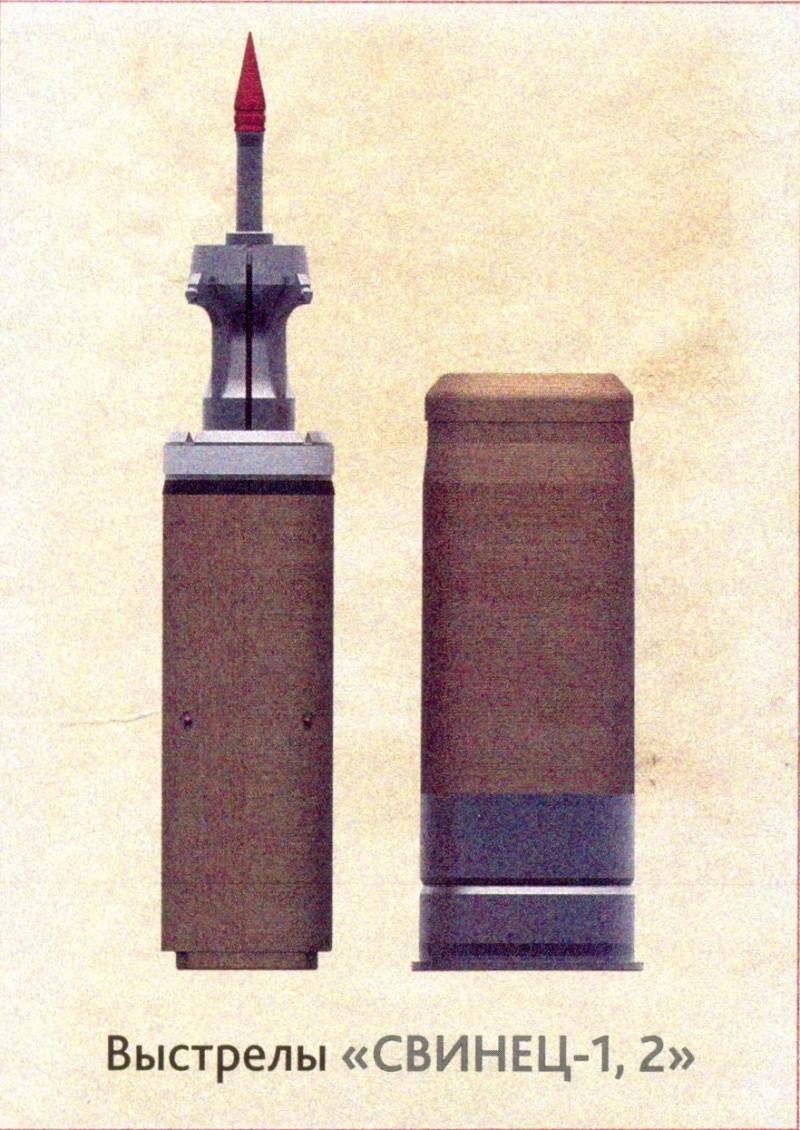 General view of the shot 3BM-59/60. Figure Russianarms.ru
At the same time, uranium alloys fully justified themselves and made it possible to obtain a significant increase in combat characteristics in a limited time. The appearance of the first BOPSs with uranium cores provided a jump from 400-430 to 470 mm of penetration, and further development made it possible to reach a higher level. However, it is not only uranium shells that are developing. Traditional cemented carbide designs have not yet exploited their full potential.

The uranium core of an armor-piercing projectile has a number of important advantages over steel or tungsten counterparts. Slightly losing in density, it is harder, stronger and more effective in terms of penetrating armor. In addition, fragments of a uranium projectile tend to ignite in the armor space, which turns the ammunition into an armor-piercing incendiary.

The USA has long understood all the advantages of such BOPS, and the result was a complete rejection of alternative designs and materials. In other countries, the situation is different. Thus, NATO members often have a mixed range of weapons in service: at the same time they use hard-alloy shells, incl. own production, and uranium imported from the USA. Russia also uses different classes of BOPS, but produces them independently.

There are no prerequisites for changing the current situation. Depleted uranium has taken its place in the field of armor-piercing projectiles and will retain it for the foreseeable future. The same goes for other materials. The reasons are simple: the core materials used have not yet reached their full potential. And the further development of tank weapons opens up new horizons for them.

Ctrl Enter
Noticed a mistake Highlight text and press. Ctrl + Enter
We are
Guns and ammunition: tanks seek to increase their firepower"Abrams" without "dill" and embellishment
117 comments
Information
Dear reader, to leave comments on the publication, you must to register.