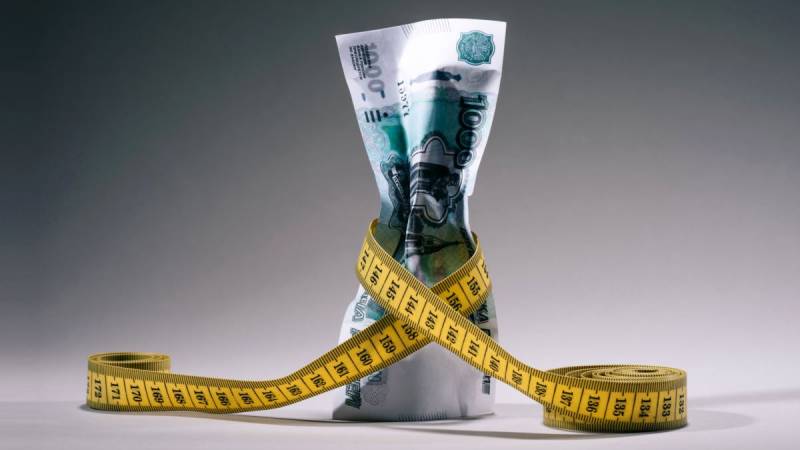 Socialism, by definition, is accounting and control. Was it really so and was socialism built in the USSR and the countries of people's democracies at all? Of course, one can doubt this. But there is no doubt that capitalism, as a rule, is false statistics (if competitors do not catch the hand) and the desire to pass off what is really desired.

Why such a lengthy introduction? And besides, with a considerable delay, the countries of the world, for the most part seemingly capitalist, began to report on crisis losses in the second quarter of 2020. The first about the fall in GDP by almost a third was bravely announced in the administration of Donald Trump, but now those "terrible" data are not confirmed by all analysts.

It is difficult to say whether abroad will believe in the data on the fall in Russian GDP, which has finally been published, as well as information on our budget, which, as expected, turned from a surplus to a deficit. Russia's GDP in the second quarter dropped by 9,6 percent at once. Not so bad compared to 32,9 percent in the United States, which has now become 20-25 and even 15-17 percent for many experts.

Russian 9,6 is not bad against the background of the British failure of 21,7 percent and 12,1 percent in the eurozone. The June indicator of a 6,4 percent drop in our GDP is much better than the May minus 10,7 percent, which can be taken as the first positive signal. Experts do have optimism about this, but very, very cautious. 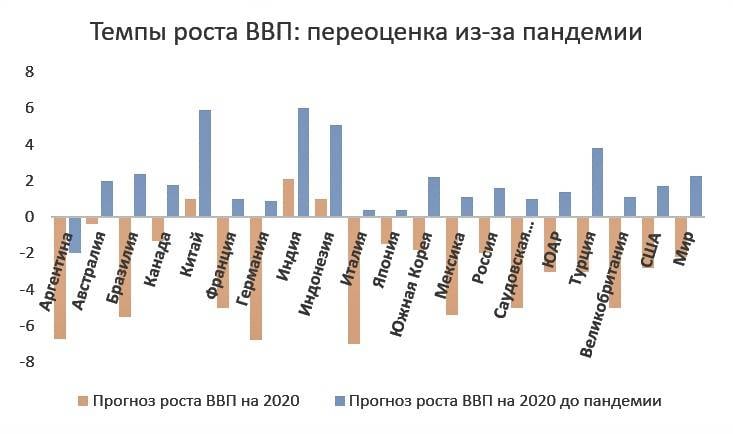 Moreover, it is by no means June or the second quarter as a whole, when everything could be attributed to the crisis and quarantine, and July may turn out to be perhaps the most difficult month for the domestic economy and finance. In the Ministry of Finance, many specialists accompany the latest reporting with very pessimistic comments:

“The flywheel of the industry that has slowed down is spinning too slowly. What is happening with agriculture is not yet entirely clear, and the service sector, which seems to have revived, remains in a coma. However, the data on GDP in July will have to wait. "
At the same time, the specialists of the Ministry of Finance, however, and not only them, now have confidence that in July a drop in GDP will be recorded only in relation to July last year. In comparison with difficult May and June, it is quite possible to count on growth.

But if the data on the fall in GDP indicate that there are certain chances of getting out of the recession, then the situation with money in Russia seems to be much worse. It was in July that the largest increase in the budget deficit was recorded. An increase of 699,2 billion rubles at once means that in the very first month of the real exit from quarantine, it took truly unprecedented expenses to help the economy warm up.

It seems that in the days of tough anti-crisis measures, the authorities found it even easier in some ways, and by the end of the second quarter they managed to incur debts of only 823,1 billion rubles. And this is against the backdrop of an almost catastrophic drop in budget revenues. Where the money spent by the government went at the same time, the reports of the Ministry of Finance say very vaguely.

However, this is understandable: first of all, to fulfill social obligations and ... to support structure-forming enterprises and industries. Read: oligarchs. It is very likely that after several years, when Russia, even under sanctions, allowed itself the luxury of replenishing various kinds of reserves, the time has come to use these reserves.

However, if funds were spent and are being spent now with enviable generosity on the actual fight against the pandemic and quarantine horror stories, then the situation with anti-crisis infusions is completely different.

The Russian financial authorities more and more resemble a dog in the hay, which sits on trillions, but does not cease to refer to some very dubious data about the lack of free funds. Note, it is “free”, this word is now often used by the head of the Ministry of Finance, and the chairman of the Bank of Russia, and many of their subordinates.

Free, but not back-up. At the same time, legislators, who have real opportunities to influence even the work of the all-powerful anti-crisis headquarters, prefer to sit in parliamentary trenches. And not always in masks, as can be seen from television screens.

Do they hide anything from us?

As you can see, the government responded to a request from critics who demanded the truth about the fall in GDP (Doctor Delyagin's diagnosis. The disaster has already happened?). And she answered promptly. It would be nice to be honest.

Actually, bad the news recently they began to feed us with enviable regularity. In the creeping line on almost any TV channel, there will definitely be a place for reports on the number of cases and deaths from COVID-19. The search engine "Yandex" has completely singled out "Coronavirus" in a special news section, although they are in no hurry to make the mobile version happy in this way.

It seems that colleagues from the business media, as if on cue, were seized by fear of the coming second wave of coronavirus. And then there is the constant reminders of experts about “black August” and “alarming autumn” after every penny that the ruble occasionally loses at the rate against the dollar or euro. Exchange growth, supposedly low inflation and slowly rising oil prices are not soothing.

Even the last trifle from the economic news section turned out to be quite unpleasant. The pandemic and crisis seem to be robbing our financial authorities of their pride - perhaps the last. Low debt burden.

According to the latest statistics released by the Central Bank and the Ministry of Finance, Russia's net public debt has significantly exceeded liquid reserves, reaching 1 trillion rubles as of July 1,55.

This is not the first time that commentators from the power structures remind that the reason for the increase in net debt was not only the crisis, which was provoked by the coronavirus pandemic and strict quarantine, but also the fall in oil prices. The purchase by the government of a controlling stake in Sberbank from the Central Bank for 2,14 trillion rubles also played a negative role.

But something happened back in April 2020, and the funds were taken from the National Welfare Fund (NWF), which, according to the law, was not so easy to do. But it was done, and does this mean that the debt burden can be reduced at the expense of the same NWF? Moreover, the federal government's debt as of July 1 is 14,77 trillion rubles, which is more than a hundred times less than the US national debt.

At the expense of reserves, in principle, it is possible to fight the budget deficit, although borrowing is often much more profitable. Yes, the liquid reserves at our disposal are now only 13,22 trillion rubles, that is, 1,55 trillion less than the debt.

Independent experts are convinced that the emergence of net debt does not pose a significant threat to the economic system, as almost all countries of the world live like this. However, this is still a landmark event - the result of the economic crisis. How quickly the debt situation can be stabilized depends on too many factors.

Yes, no one is demanding immediate retribution, and in the foreseeable future it is unlikely that they will dare to demand at all. In addition, the very liquid assets of the government can be replenished with political will. Including from the reserves of the Bank of Russia. However, for this, it seems, the world needs to be turned upside down, and this kind of initiative cannot be obtained from any parliamentary party. 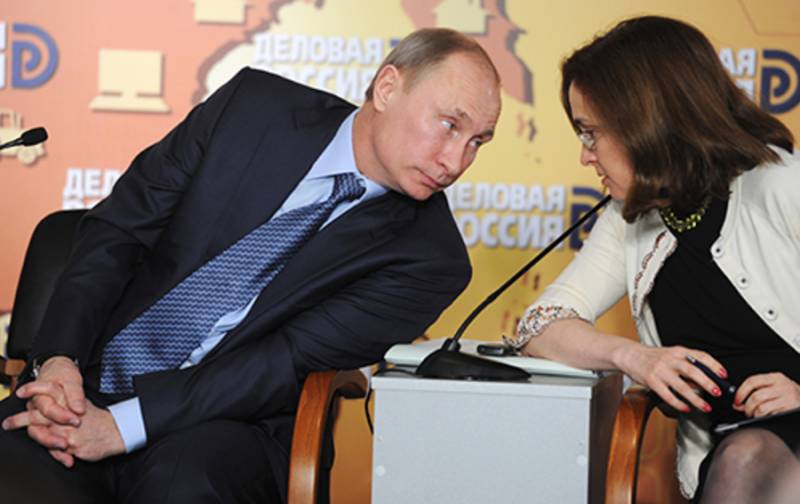 But even if a terrible thing happens and the instruction to the Bank of Russia "to help financially" still follows, you understand where, the board headed by the best banker in the world Elvira Nabiullina (Who will the Central Bank save: us or who it needs?) will probably be hard against. You must also confirm your legally established independence.

And to confirm it regularly. And to continue to reduce the money supply further, leaving in semi-poverty not only more than half of the country's citizens, but also the entire half-dead business - both small and even medium. The Bank of Russia prefers to act this way.

In the meantime, thanks to the increasing, almost complete freedom in dealing with currency, which is consistently promoted by the Central Bank of the Russian Federation, even during the crisis, big business continues to grow fat along with big banks.

They are simply cared for and cherished in the regulator's offices. But are they capable of becoming the locomotives of post-crisis growth? There are very big doubts about this.

Ctrl Enter
Noticed oshЫbku Highlight text and press. Ctrl + Enter
We are
Situational analysis of the death of the MH17 flight (Malaysian Boeing 777), made on the basis of engineering analysis from 15.08.2014Results of the week. “In our cooperative, the board is always agreed”
Military Reviewin Yandex News
Military Reviewin Google News
131 comment
Information
Dear reader, to leave comments on the publication, you must to register.