Fear of repeating Beirut. Will the transport sunk at the Thames estuary explode? 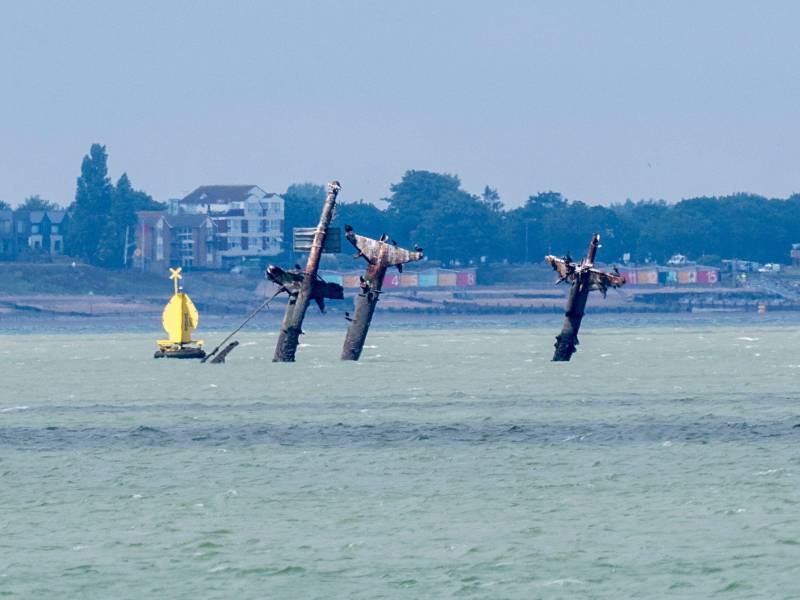 The masts of the sunken transport Richard Montgomery

The echo of the explosion in the port of Beirut swept across the planet, bringing out some of the skeletons in the closet. Once again in Great Britain they started talking about the Richard Montgomery transport that sank during the Second World War. The ship sank at the estuary of the Thames at shallow depth in September 1944. Everything would be fine, but on board the transport that was heading to France, there were about 1,5 thousand tons of various ammunition. And, although experts estimate the likelihood of an explosion as unlikely, if it happens, it will seem little to anyone.

Transport Richard Montgomery belongs to the ships of the "Liberty" class, which became the real workers of the Second World War, providing transportation for the Allies in various theaters of war. The US-designed ship has been built in a huge series of over 2700 ships. The ships' displacement reached 14 tons, the maximum speed was up to 450 knots (just over 11 km / h).

The ship turned out to be quite successful both in terms of its cargo capabilities and production technology. The cruising range was up to 20 thousand nautical miles. In one flight, 2840 jeeps, 440 light or 260 medium jeeps could be taken on board tanks, up to 300 thousand 105-mm shells. But in practice, loads were often combined. The records that were set during the assembly of these ships testify to the adaptability of the project. So, in November 1942, the SS Robert Peary transport was built in 4 days 15 hours and 29 minutes (this is the time from bookmark to launch). This transport not only survived the war, but was also actively operated until 1963. Yet it was a propaganda trick, albeit a very successful one. But even without this, the average speed of building ships by the end of 1942 was brought to 42 days, and 18 shipyards collecting transports of the Liberty type produced the fleet three finished ships every day. 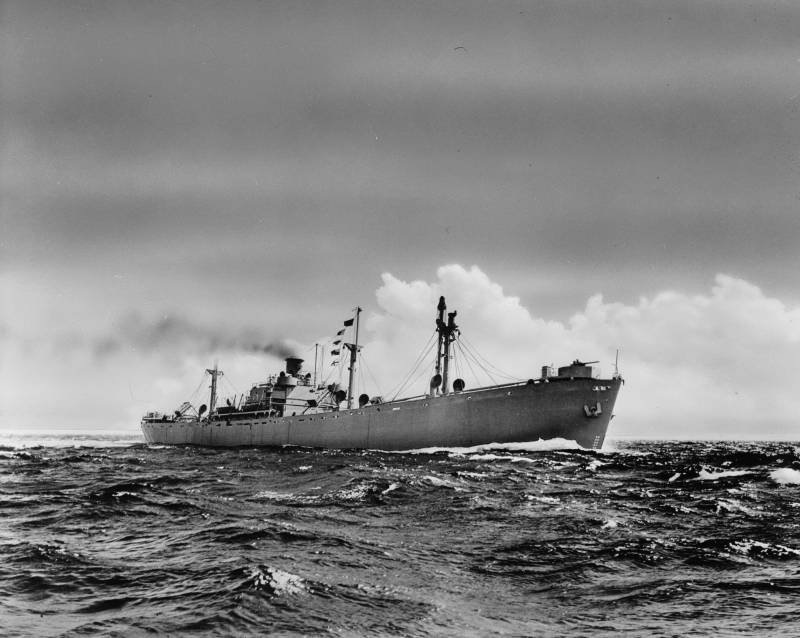 Liberty-class transport ship at sea
The transport of interest to us, Richard Montgomery, was laid down in Jacksonville, Florida. The ship was built by St. Johns River Shipbuilding Company. It began its activity in April 1942, having released 82 transport ships of the "Liberty" type until the end of the war. The Richard Montgomery was the seventh ship of this type built at the Jacksonville shipyard. The bookmark of the ship took place on March 15, 1943, and already on June 15 of the same year, the ship was launched.

Many ships of the "Liberty" type received their own names in honor of the famous historical leaders or distinguished servicemen in battles. The hero of our story was no exception. The ship was named after Richard Montgomery, an Irish national who began his career as a soldier and officer in the British army. And later he became one of the heroes of the US War of Independence, already being a General of the Continental Army.

In August 1944, the ship was working in the Atlantic. Arriving in Great Britain, the transport was supposed to deliver military supplies to the port of Cherbourg, which completely came under the control of the Allies at the end of June 1944, but was not fully operational until mid-August. The ship Richard Montgomery, which was loaded with approximately 7 tons of various ammunition, was due to arrive in the UK, joining the HX-301 convoy, which was to travel to Cherbourg to deliver military supplies to the Allied forces fighting in France.

Arriving at the Thames estuary, the transport anchored near the port city of Sheerness, awaiting the complete formation of the convoy. On August 20, the ship weighed anchor at high tide. This was followed by a series of strange mistakes, which led to the fact that the ship was carried out on a wide sandbank near Shearness and the shipping channel in the direction of the Medway River, which flows into the Thames estuary near this city. The ship ran aground and damaged its hull. The peculiarity of the Liberty-class ships played a role here. These vessels were good and technologically advanced, but no one seriously counted on their long-term operation, focusing on mass construction. 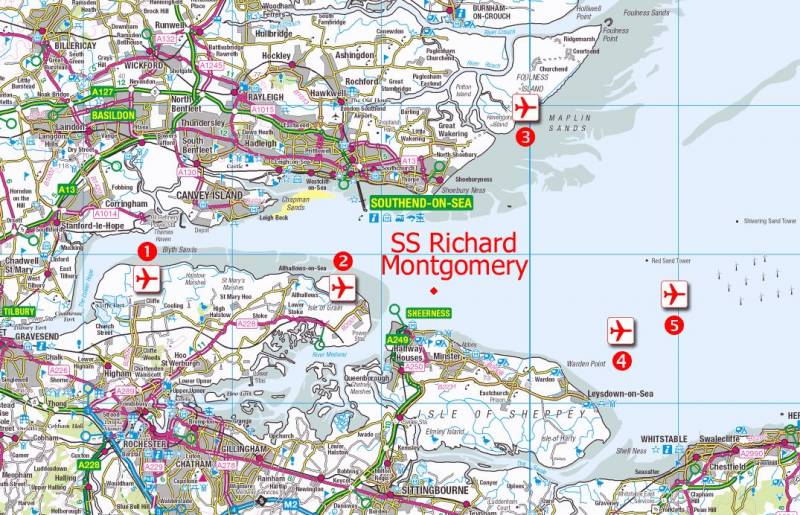 The place where the transport sank
The entire operation of the ships of this series was accompanied by problems with the strength of the hull. On earlier transports, these problems were more pronounced, but they still could not be completely eliminated. Twelve ships of this project literally broke right into the sea, and in total, about 1,5 thousand cases of cracks in the hull structure were noted on the ships during operation. This was partly due to the rush during construction, the use of a new technology for welding hulls, and the involvement of unskilled workers in the face of a shortage of personnel. Their role was also imposed by the frequent operation of ships with overload and temperature drops in the North Atlantic.

On the second day after running aground, the Richard Montgomery began literally cracking at the seams, aided by the strength of the tides in the area. The ship could not be removed from the shallows for two weeks. At the same time, all this time, work on unloading the ship did not stop in order to save the cargo, as well as to reduce the draft of the ship. Ultimately, the ship's hull could not withstand the loads and finally broke, the water quickly flooded the front holds. At the same time, the unloading of ammunition from the aft holds continued until September 25. It was on this day that the ship, which broke into two parts, completely sank.

According to the official version, most of the dangerous goods were removed from the transport. And yet, approximately 1400 tons of various ammunition remain in its holds. At the same time, as the Guardian newspaper wrote a year ago, some experts believe that there may be twice as many explosives on board the ship than is officially believed. According to official information, there are 15 286 kg bombs, 910 4439 kg bombs, 450 1925 kg bombs, as well as 230 fragmentation and cluster bombs, various explosive substances, fuses, white phosphorus ammunition, smoke charges, signal flares, etc. 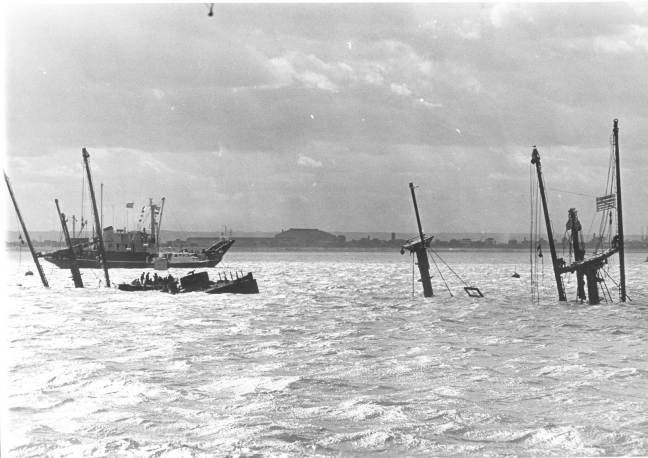 What is the danger of a sunken ship?

Currently, the sunken ship is well researched, its condition is regularly monitored by British divers and special expeditions. The ship, broken in two, lies at a depth of 15 meters on a large sandbank. At the same time, all three masts of the ship constantly stick out above the water, regardless of the beginning of the ebb or flow. It is known that the ship is lying on the bottom with a roll to starboard. Due to the presence of a large number of explosive substances on board, the vessel is under constant control of the Maritime and Coast Guard Agency. And the flood site itself is marked on all maps and highlighted by warning buoys. Despite this, over the past years, almost 24 accidents have occurred here, and once a cargo ship actually collided with debris, damaging the propeller. This only increases the risk of a possible explosion.

How sad the British joke, if the ship had sunk at the walls of the country's parliament, some work on the extraction of ammunition would have already been carried out. On the other hand, this is not so easy to do. Especially when you consider that there are unfortunate examples of such operations in English history. In July 1967, an attempt to retrieve explosive cargo from the Polish cargo ship Kielce, which sank in the English Channel near Folkestone back in 1946, ended in failure. The ship exploded during the preparatory work. As a result, a crater 6 meters deep was formed at the bottom, and the explosion itself was comparable to an earthquake equivalent to 4,5 on the Richter scale. The explosion caused real panic in Folkestone, although there were no casualties in the city. At the same time, experts note that Kielce sank at a distance of 4 miles from the coast and at greater depths.

Transport "Richard Montgomery" is much more dangerous, as it lies at a shallow depth about a mile from Sheerness. The explosion of the ship can pose a danger to all ships passing in the area, as well as to the city itself with a population of 20 thousand inhabitants and the nearest settlements, in which all windows will definitely have to be changed. In this case, glass fragments themselves will act as a striking factor and can seriously injure people. Also, one of the consequences of the explosion could be a miniature tsunami with a wave height of 4 to 16 feet (1,2 to 4,8 meters). Such a mini-tsunami will cause flooding, which will cause significant economic damage to the surrounding areas. 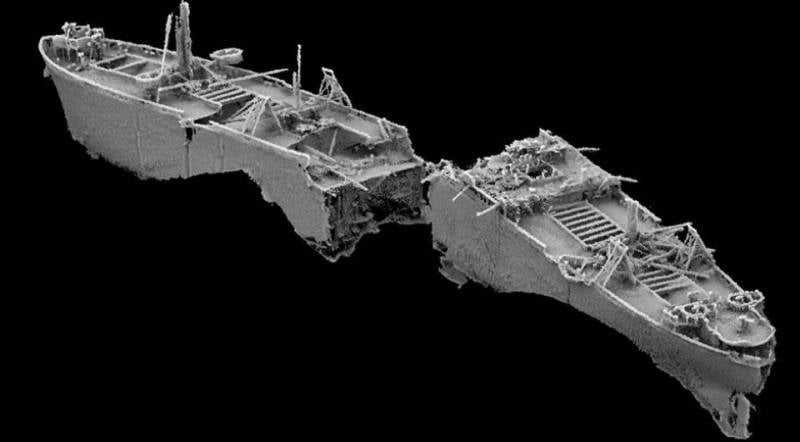 Image of sunken ship parts
Recent studies show that the ship's hull is increasingly corroded. Experts estimate the likelihood of a serious explosion as small. But such a scenario is not completely ruled out. An explosion can occur if the cargo is severely moved or the ship collides with debris. In an area where about five thousand ships pass every year, this cannot be ruled out. The fact that a large number of fragmentation bombs filled with fuses remain on the upper deck of the ship above the bow holds adds fuel to the fire. Their fall into the holds together with the structures of the ship and the subsequent explosion can cause a chain reaction. Also, experts do not completely exclude the possibility of an explosion in the process of spontaneous destruction of ammunition.

In any case, at the present time, work continues to monitor the condition of the vessel. And the explosion in Beirut will only give this problem additional attention. Among the latest actions the British authorities are ready to take is a project to cut the masts, the tops of which are visible above the surface of the water. The best military experts will be hired to remove the masts. At the same time, the process of removal itself is associated not so much with the elimination of the possibility of collision with other ships, but with the weakening of the pressure that they exert on the ship's hull, which collapses over time. According to experts, at present, the masts are already creating an excessive load on the entire structure of the sunken ship.

Ctrl Enter
Noticed oshЫbku Highlight text and press. Ctrl + Enter
We are
How Hitler saved Stalin from conquering the Middle EastWhat you didn't want to know about England
Military Reviewin Yandex News
Military Reviewin Google News
31 comment
Information
Dear reader, to leave comments on the publication, you must to register.