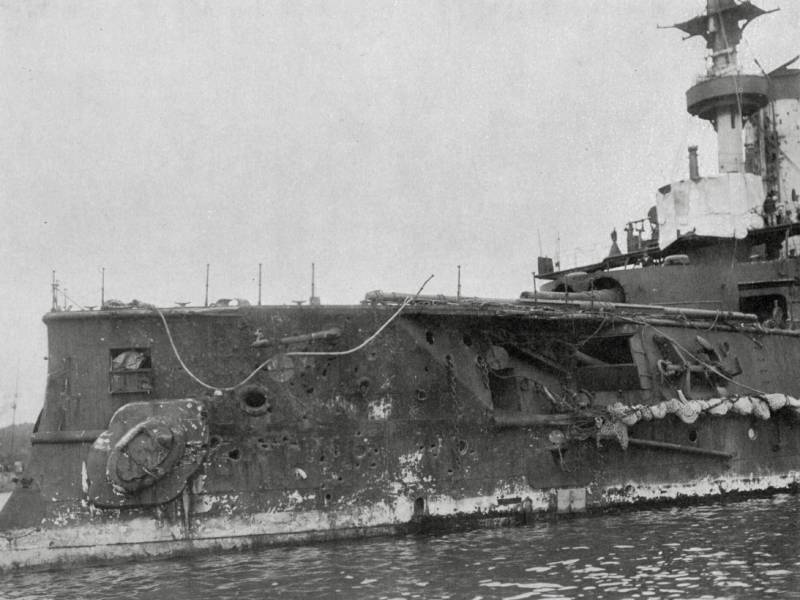 Battleship "Emperor Nicholas I" after Tsushima

Dear readers, I am opening a series of articles devoted to the analysis of the "shell version" as the reason for the defeat of the Russian fleet in the Tsushima battle.

The "shell version" is one of those themes of the Russo-Japanese War that always causes heated debate. According to one side, the shortcomings of Russian shells became one of the most important reasons for the defeat at Tsushima, while the other side refutes this opinion.

The "shell version" itself first appeared in the statements of the participants in the Tsushima battle, describing the monstrous effect of the action of Japanese shells and very modest damage from the Russians against their background.

So, in the testimony of Rear Admiral N.I. Nebogatov, he said that he saw with his own eyes the battleships Mikasa and Fuji the next day after the battle with practically no damage: “... as if these ships had been on practice shooting the day before, and not participated in a fierce battle. " And he noticed one small, practically round hole in the Mikasa's side from our shell, which probably "split into large pieces without causing any damage around, except for a broken water pipe and damaged paint." And the admiral names the reasons for the unsatisfactory operation of our ammunition:

1. Unsuccessful design of fuses, as a result of which 75% of our shells did not explode.

2. A small explosive charge in the projectile.

Warrant officer G. Ungern-Sternberg, who participated in Tsushima on the same battleship "Emperor Nicholas I" as N. I. Nebogatov, noted that the effect of Russian shells was lower than that of Japanese shells, since ours did not cause large fires. but the enemy, although they did not pierce the armor, but "getting into the side, deployed everything in their path, breaking into small fragments."

Rear Admiral OA Enquist believed that the Japanese shells were more than twice as powerful as the Russian ones, since their walls are almost twice as thin and they contain almost twice as much explosive, which is more powerful than our pyroxylin. In addition, he noted the advantage of Japanese ammunition in detonation from the slightest obstacle, as opposed to the Russians, which explode with a long delay after impact or do not explode at all, as well as in the creation of a huge number of fragments "small, penetrating everywhere and destroying everything in their path" as opposed to Russians, who create a small number of fragments during the explosion.

Lieutenant Taube, who served on the coastal defense battleship General-Admiral Apraksin, estimated the Japanese shells much higher than the Russians, citing as an argument that they "burst into the water, when they explode, they apparently give a huge amount of fragments, heated to a very high temperature, the fragments have a huge destructive power. "

The senior officer of the cruiser "Oleg" Captain 2nd Rank Posokhov noted the advantage of Japanese shells in that their destructive power does not depend on speed and is the same at any distance. And even with close explosions, they hit the enemy with shrapnel, shock waves and splashes of water. "It is very insulting and bitter that we could not come up with such a simple idea." In his opinion, adopting landmines similar to Japanese ones would be much more useful than adopting armor-piercing shells with an armor-piercing (Makarov) cap.

The flagship navigator, Captain 2nd Rank De-Livron, who was on the battleship "Prince Suvorov", compares the nature of the holes from Russian and Japanese shells:

Japanese shells burst into countless pieces of various sizes, and the force of their breaking is such that these pieces not only knock out people in a large space, but spoil the guns and pierce the side, pipes, fans, making them like a sieve, and knock down masts, rigging , drives and wires ... Our shells pierce a smooth, round hole in the side, slightly larger than the diameter of the shell, which is easy to plug with a plug. Thinking that the Japanese shells are the same, our squadron has prepared a lot of various sizes of wooden plugs for hammering holes, meanwhile the Japanese shells act more like a mine, and not as live force, like ours; bursting from touching the board or some object, they pierce the board with the force of an explosion or gases and make a ragged hole: the board cracks and turns out in that place in pieces and a large irregular concavity is obtained around, making it difficult to patch up such a hole with anything. When comparing the hole in the Aurora from our 75-mm projectile, which hit the side in the German Sea during the Gul incident, with the hole in the 75-mm Japanese shell, a huge difference is visible ...
Artillery officer of the cruiser "Aurora" Lieutenant Losev is convinced of the superiority of the Japanese shells over the Russians due to the powerful high-explosive effect, while the Russian shells, in his opinion, almost did not cause any damage. 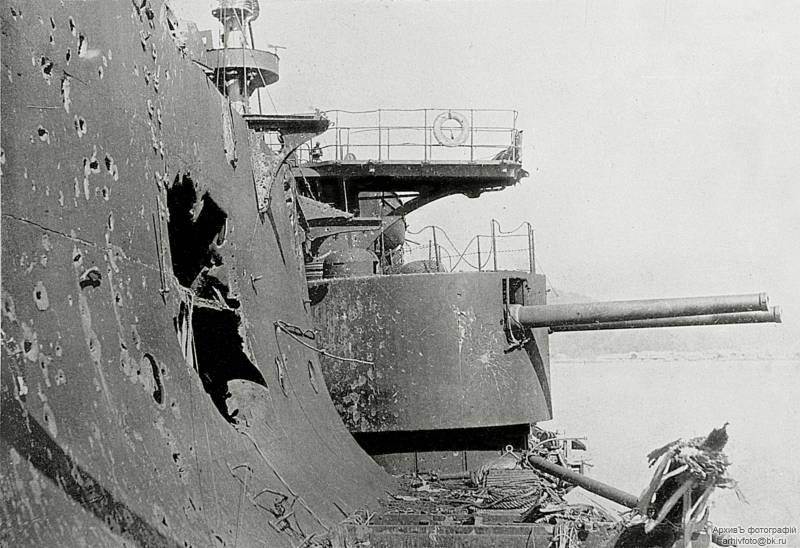 The opinion of numerous Tsushima veterans about the weakness of the action of domestic shells was supported by the results of tests of land mines, which were conducted by Rear Admiral K.P. Jessen.

However, the attentive reader may immediately be alerted by the fact that the "shell version" has arisen after Tsushima. But Tsushima was preceded by several major naval battles, in which both the Russians and the Japanese used the same shells!

Let's see how the effect of the Japanese shells on the ships of the 1st Pacific Squadron and the Vladivostok cruiser squadron was evaluated.

In a report on the results of the battle on January 27, 1904, Vice Admiral O. V. Stark wrote that the effect of the explosions of Japanese shells was weaker than expected, they created small fragments and did not cause fires. Even the thinnest armor was never pierced by either high-explosive or armor-piercing shells.

Senior officer of "Poltava" Captain 2nd Rank SI Lutonin was sure that our shells at distances of up to 20 cables penetrate the enemy's armor and hit vital parts of the ship. And during the battle, the Japanese, obviously, received great damage.

Japanese shells, either 80 or 20 cable, act the same way, break at the first touch to the casing and destroy 1/2-inch sheets, and where they meet a thickness of 2 inches, they are powerless.
Isn't that so, the picture is very different from the one painted by the veterans of Tsushima?

According to the results of the battle in the Yellow Sea, SI Lutonin added that hits on the armor led to very minor damage. Three 12 "shells left only imprints with radiance on the armor belt, and 6" shells hitting the armor did not even leave any cracks or potholes, but only a glow. The fragments from the Japanese shells were small and did not do much harm, their strength was barely enough to pierce thin unarmored bulkheads.

But "Poltava" was one of the most damaged of our ships in that battle! But in the description of the impact of Japanese shells, there is not even a tenth of the horror with which the memories of the Tsushima participants were filled. 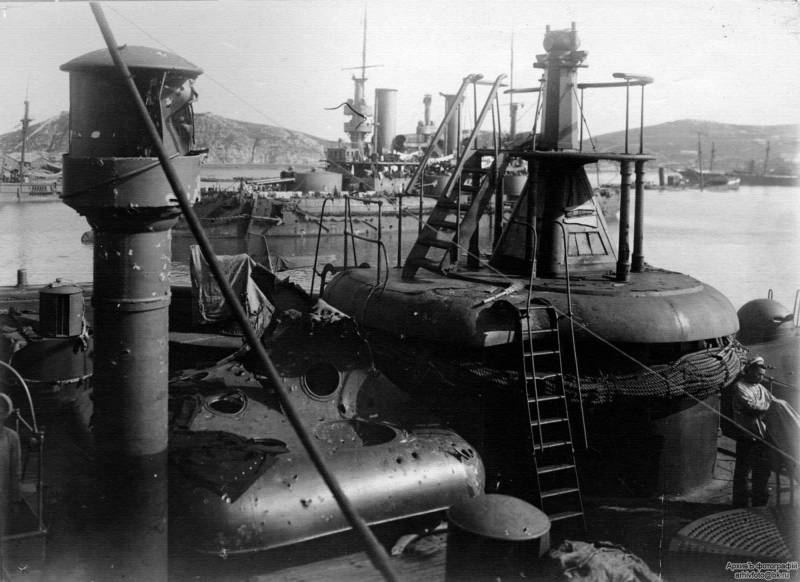 There was no doubt about the effectiveness of the Russian shells, and here again we see a sharp contrast with Tsushima. For example, the commander of Sevastopol, Captain 1st Rank N.O. Essen testified that many of the guns on Mikas were silent, in the middle of the ship there was a through hole from our 12 "shell," near the conning tower everything was torn apart, part of the ship is smoke. "

Now let's look at the impressions of the battle in the Korea Strait.

Captain 2nd Rank NL Klado, who personally saw the damaged "Russia" and "Thunderbolt", concluded that in 5 hours of battle, the Japanese, who had a triple superiority in artillery, were able to inflict only superficial damage without causing damage to the vital parts of our ships ... Only artillery, not protected by armor, suffered. And the huge damage to the unarmored parts of the ship, which made a strong impression on those who saw them, were all repaired in just a month by the very modest repair capabilities of Vladivostok.

Cruiser "Russia" after the battle in the Korean Strait: 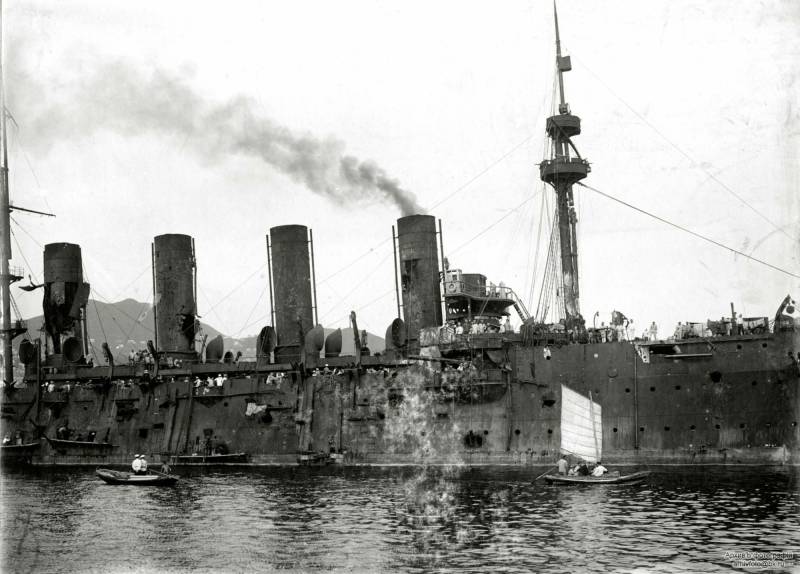 And even K. P. Jessen, who after Tsushima spoke of "the complete invalidity of the high-explosive shells of our fleet in comparison with the Japanese", reported in a report on the battle in the Korean Strait that our shells "apparently produced considerable damage on enemy ships "And" it was clearly seen that the enemy ships suffered greatly. "

So why did the assessment of the impact of projectiles change so radically after Tsushima? (I remind you that there are no facts indicating the use of any different shells in Tsushima.)

There are two reasons for this.

The first reason is a consequence of the drowning of armored ships by the action of artillery, which had not happened before in this war (remember, "Rurik" was sunk by its own crew). And the impressions of the destructive action of the Japanese shells were inextricably linked with this fact. It turns out that this was a purely emotional reason, because from the point of view of formal logic, the sinking of ships does not at all prove the superiority of shells, if only because there was no sufficient data for analysis on the number of hits.

The second reason is that, while in captivity on Japanese ships, the Russians first saw the results of their own shells. And here it is worth noting that they could see only a very small part of the destruction, so this reason is very subjective.

As a result, it can be stated that the "shell version" arose on the basis of impressions from the external destruction of ships, which only very remotely reflected the effectiveness of Russian and Japanese shells.

Nevertheless, the explanation of the Tsushima catastrophe through the superiority of Japanese shells, 10-20 years after the battle, was firmly rooted in the scientific and journalistic literature.

In a 7-volume work historical The commission admitted that "the shells were very bad ... equipped with a microscopic charge of explosives, which has a small blasting force", and land mines equipped with armor-piercing tubes exploded only from hits in the armor.

Admiral A. V. Shatl in 1923 in an article for the "Marine collection" declared at least 150-fold fire superiority of the Japanese fleet, which predetermined the outcome of Tsushima.

Thus, the "shell version" was finally formed, explaining Tsushima by the huge superiority of the Japanese shells over the Russians. Our fleet could not oppose anything to "flying mines" and "liquid fire".

Ctrl Enter
Noticed oshЫbku Highlight text and press. Ctrl + Enter
We are
About Stalin and KhrushchevWhat you didn't want to know about England
Military Reviewin Yandex News
Military Reviewin Google News
328 comments
Information
Dear reader, to leave comments on the publication, you must sign in.