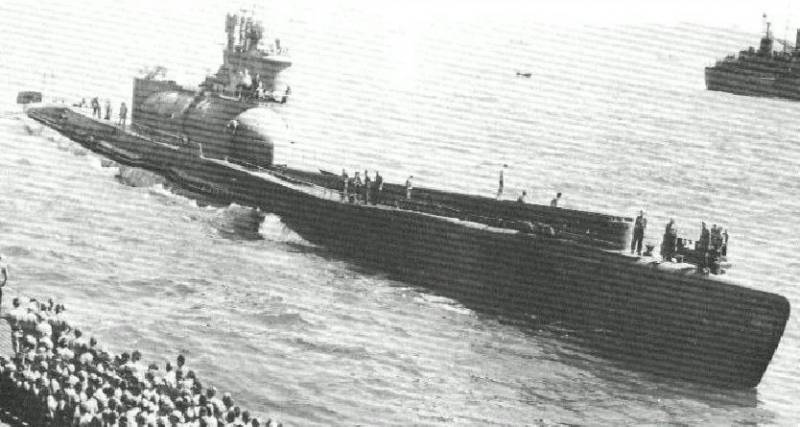 The peak of the development of Japanese submarine shipbuilding during the Second World War was the project of the aircraft-carrying submarine "Sentoku". Such ships were supposed to operate at a great distance from the bases and ensure the delivery of airstrikes against enemy targets. However, all efforts to build these submarines were not justified - they have never been able to complete a combat mission.

At the turn of 1941-42. Japanese command fleet began to study the issue of striking the continental United States. The use of aircraft carriers or surface ships was overly dangerous, and therefore the idea of ​​a heavy submarine carrying seaplanes-bombers appeared. The development of the preliminary and technical design continued until the spring of 1942, after which construction began. The project received the designation "Tokugata Sensuikan" (abbreviated "Sentoku") - "Special submarine".

General view of the "Sentoku" type boats. Graphics Wiki.wargaming.net
The original plans called for the construction of 18 ships. However, in 1943 the construction plan was cut in half. Then several more orders were canceled. As a result, the fleet hoped to receive only five submarines. Only three of them were completed and handed over - the other two, for various reasons, did not reach service and were dismantled.

The lead boat I-400 was laid down on January 18, 1943 at the Kure shipyard. Construction of the next I-401 began in April, and three more buildings were laid in the fall. Exactly one year after the laying of the I-400 was launched, and during 1944 three more boats followed. The lead ship was handed over on the eve of the new 1945, and I-401 and I-402 began service in January and July. Curiously, at the final stage of construction, I-402 was converted from an aircraft carrier to a tanker. Thus, in the end, the fleet received only two heavy aircraft-carrying boats.

Submarine diagram. Below are the sections of the sturdy case. Graphics Wikimedia Commons

"Sentoku" was a diesel-electric boat with a length of 122 meters and a total displacement of 6,7 thousand tons. The ships of this series remained the largest in the world before the advent of nuclear submarines. A sturdy casing with a cross-section in the form of intersecting circles, divided by a transverse and longitudinal bulkhead, was used. Due to this, it was possible to obtain a large width of the boat, necessary to accommodate the hangar-superstructure and the catapult. 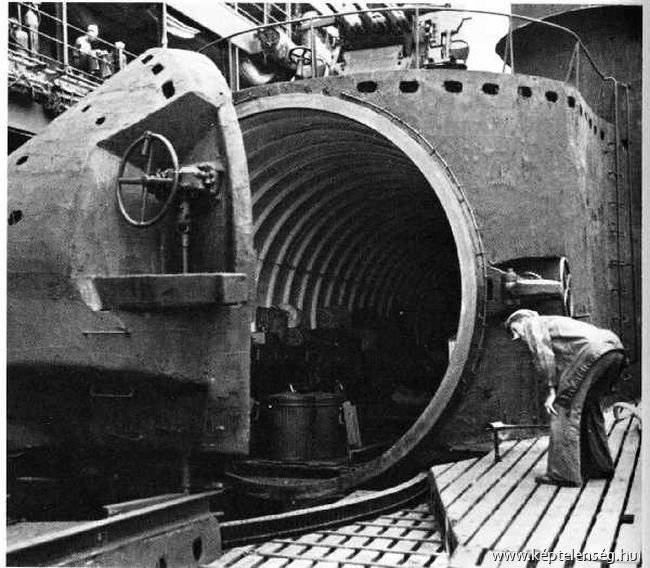 An American officer examines an open hangar. Photo by US Navy
The crew consisted of one and a half hundred people, incl. two dozen officers. Autonomy - 90 days, but the service conditions left much to be desired.

The large submarine received a developed complex of torpedo and artillery weapons. On the two decks of the bow compartment were placed four torpedo tubes of 533 mm caliber. Ammunition - 20 torpedoes. On the deck, behind the superstructure, was a 140-mm rifled gun. Anti-aircraft armament included 10 25 mm caliber machine guns on one single and three triple mountings. 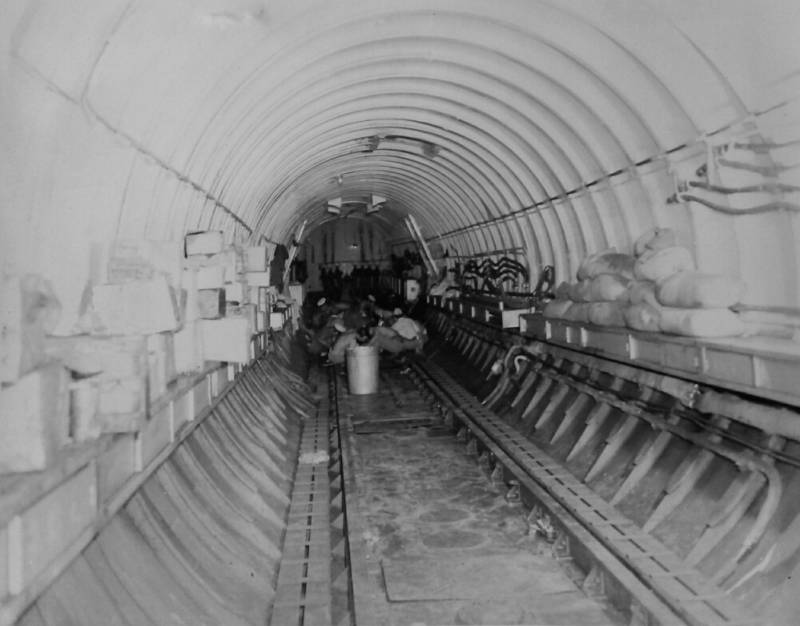 Hangar interior on I-400. Photo Ww2db.com
The main strike means of the I-400 and its sisterships were float bombers "Aichi" M6A "Seiran". They developed speeds of up to 480 km / h and could deliver an 800-kg bomb or a comparable load at a range of 1,2 thousand km.

The superstructure of the Sentoku submarine was made in the form of a cylindrical sealed hangar, capable of accommodating 3 aircraft, as well as containers with fuel and ammunition. The exit from the hangar was carried out through the bow hatch; in front of him there was a catapult rail guide. It was proposed to land on the water, after which the plane climbed onto the deck using a crane. The possibility of flying without returning to the boat was also considered. 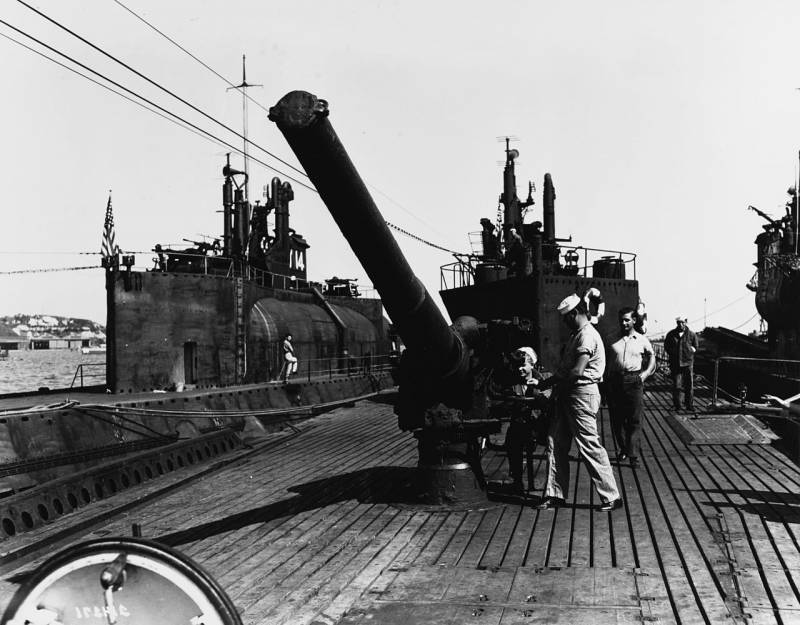 By the time the construction of Sentoku was completed, it became clear that a successful attack on the continental United States was simply impossible. If the submarine-aircraft carrier and managed to approach the line of launching the aircraft, then the air defense would not let them pass to important targets. In this regard, an alternative plan appeared - to attack the structures of the Panama Canal from the Atlantic side.

Planning and preparation was seriously delayed, and the operation could only begin in June 1945. Submarines I-400, I-401, as well as I-13 and I-14 of another project had to covertly round South America and approach the entrance to the Panama Canal. Then ten aircraft with suicide pilots were to attack the gates of the first airlock. 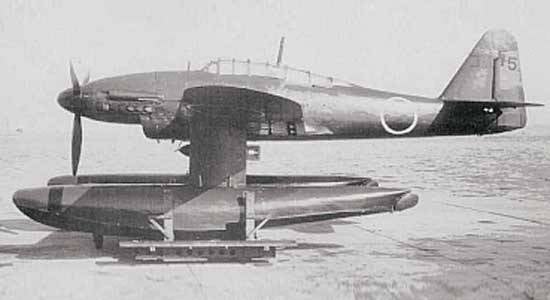 Bomber M6A "Sayran" with float landing gear. Photo by Wikimedia Commonc
However, at the end of June, a new order followed. Aircraft carriers "Sentoku" decided to transfer to Ulichi Atoll to attack American surface ships. Preparations again took a lot of time, and the submarines went on a campaign only in early August. Not reaching their target, the submariners received a message of surrender. A few days later, all participants in the operation met the US Navy ships and surrendered.

At this time, preparations were being made for another operation. At the end of September, the Seirans from the Sentoku were to drop bombs with infected insects on US soil. However, the defeat of Japan canceled this bombing.

Submarine I-401 at sea. Photo Wikimedia Commons
The winners studied the captured submarines, but did not save them. From April to June 1946 the ships I-400, I-401 and I-402 were used as targets for firing. As a result of these exercises, three unique ships went to the bottom. Two unfinished boats were dismantled.

The Sentoku-class submarines were developed and built longer than they served. In addition, for several months of service, they never made full-fledged campaigns - and did not participate in battles. Thus, a complex and ambitious project did not give any results, except for demonstrating the fundamental capabilities of shipbuilding. 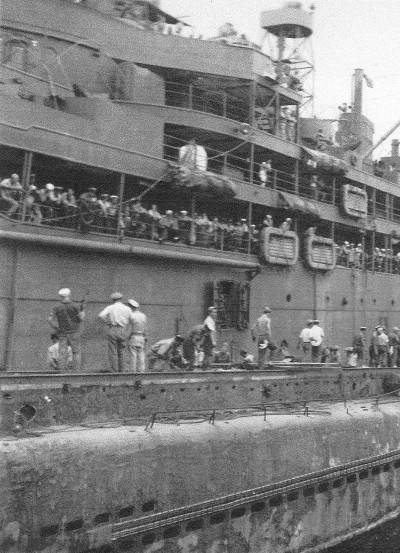 Submarine I-400 on board the American floating base USS Proteus (AS-19), August 29, 1945 Photo Ww2db.com
The main problem of the project, with which other shortcomings and difficulties were directly related, can be considered a mistaken concept. Placing strike aircraft on a submarine can provide some advantages, but it introduces many limitations and difficulties. It is because of this that "Sentoku" turned out to be too large and heavy, as well as difficult to manufacture and operate. In addition, the hypothetical potential was reduced due to the small number of aircraft and ammunition on board, as well as due to the specifics of their use.

The start of the construction of aircraft carrier submarines coincided with the period when Japan first faced serious resource and industrial capacity shortages. For this reason, the series of 18 boats was reduced several times, and in the end it was possible to build and commission only two aircraft-carrying submarines and one underwater tanker. The combat value of such a "powerful" group was dubious. 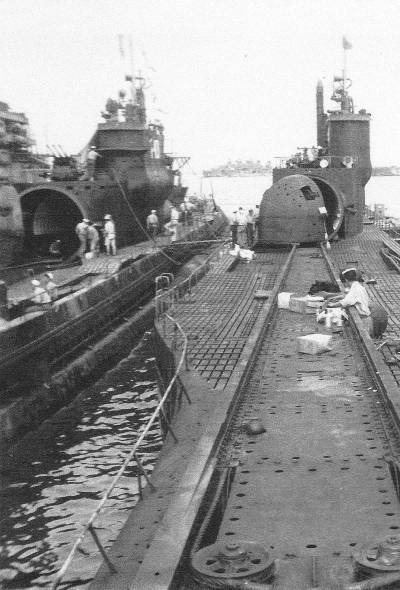 The Proteus floating base (only part of the superstructure is visible on the left), submarines I-400 (left) and I-14 (right). Photo Ww2db.com
Finally, in the last months of the war, the Japanese command found itself in an extremely difficult situation. Not having the desired grouping of ships, it tried to carry out decisive and even adventurous operations. However, throwing between different plans led to the fact that a number of operations did not have time to prepare and carry out in time - and the surrender put an end to all plans.

Thus, the Sentoku submarines were built on the basis of a dubious concept, were too complex and few in number, and were not used correctly. All this did not allow them to become full-fledged combat units and cause at least some damage to the enemy. On the contrary, I-400 and I-401 helped the American sailors to practice the issues of taking and studying trophies, and also provided shooting training.

However, "Sentoku" found their place in stories - not least because of their failures. They turned out to be the largest, heaviest and most useless submarines of the Second World War.

Ctrl Enter
Noticed oshЫbku Highlight text and press. Ctrl + Enter
We are
Why did the battleships really disappear?Ultra D-Type Submarines (Japan)
16 comments
Information
Dear reader, to leave comments on the publication, you must to register.