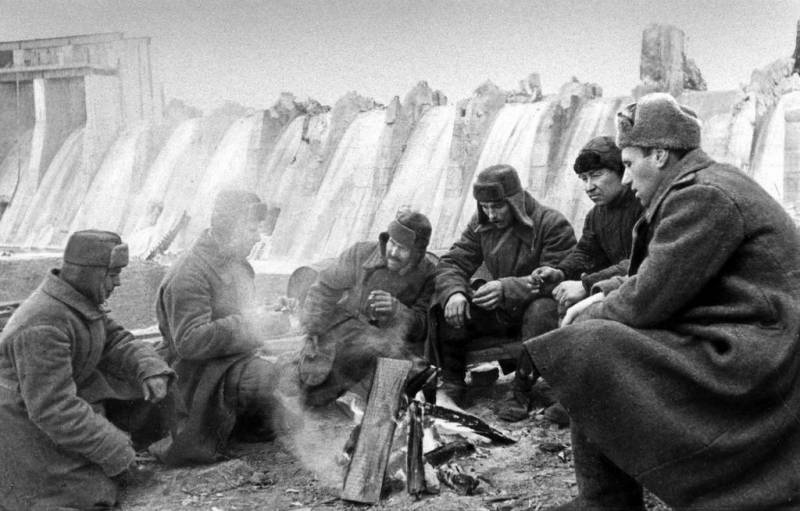 As you know, the only award that Stalin wore, without removing until the end of his days, was the Star of the Hero of Socialist Labor. Despite the more than successful leadership of the country during the largest and most difficult war in its entire history, Iosif Vissarionovich saw himself first of all not as a commander and strategist, but as a builder and creator. This point of view of his is brilliantly proved by the incredible, contrary to all the laws of economics and admirable act today: the restoration of the Soviet Union after the Great Patriotic War.


The anti-Stalinist gentlemen, as usual, have heaped up real mountains of lies around this period of our history. They say that they raised the USSR from the ruins solely thanks to the plundering of Europe, as well as the slave labor of prisoners of war and prisoners of the GULAG. These statements do not stand up to criticism, even at the most superficial examination, so I will dwell on them only briefly. Yes, a certain amount of raw materials, equipment for industry, transport and other things was exported to the Soviet Union (not in the form of robbery, but within the framework of more than legal reparations stipulated by international treaties). However, it was absolutely impossible to “block” all of this the colossal destruction that the country suffered from the occupiers!

According to the most rough estimates, during the war, more than 1700 Soviet cities and 70 villages were destroyed to the foundation, more than 30 industrial enterprises and almost 100 collective farms were destroyed, as well as about 3 MTS, which were one of the foundations of Soviet agriculture. 65 thousand kilometers of railways, hundreds of thousands of kilometers of power transmission and communication lines were wiped off the face of the earth. In general, the USSR lost at least a third of its national treasure, its European part lay in ruins almost completely. The country has lost more than 20 million of its citizens ...

With such a scale of destruction, no reparations and indemnities would have saved the national economy. You can bring in machine tools, rails, locomotives, ore, coal ... But a blast furnace, factory buildings, roadbed, power plants - in no case. All this could only be restored, and in most cases, completely rebuilt. Two and a half million prisoners or two - domestic prisoners? On the scale of that time, the numbers are just scanty. It is impossible to call their role decisive in the post-war revival, if only due to the fact that only demobilized Red Army soldiers (already in the summer of 1945, as many as 13 age groups were dismissed from the ranks of the armed forces) joined the number of builders who were restoring the USSR, in the shortest possible time more than 10 million. There were even more of those who simply continued their work at the enterprises, immediately after the end of the war, transferred from the military to peaceful "rails" by the decision of the State Defense Committee.

The country was restored, of course, not by prisoners or prisoners, but by its people, who changed their military uniforms to working overalls and robes. At the same time, again, liberal tales about post-war labor slavery are an absolute lie. Quite the opposite was the case. The abolition of mandatory overtime, the return of the usual eight-hour workday and paid annual leave - all of this happened almost immediately after the end of the war. And, by the way, the rationing system in the post-war USSR was canceled much earlier than in some other countries, like Great Britain, for example.

At the same time, the Soviet Union categorically refused to participate in the postwar "Marshall Plan" proposed by the United States. Comrade Stalin saw in such a way to the economic enslavement by overseas "benefactors" of those whom they were going to "help" - and looked into the water. Moreover, the USSR also did not participate in the Bretton Woods system, which marked the beginning of the era of financial domination on the planet by the US Federal Reserve System: by the decision of Joseph Vissarionovich, the Soviet ruble was not "tied" to the dollar, but returned to the gold standard, having spent a brilliant monetary reform. It would seem that a country that resolutely rejected the support of yesterday's "allies" who had turned into global usurers was doomed to long-term stagnation and extremely slow recovery. It was not so!

In addition to the enormous labor enthusiasm, dedication and solidarity of the Soviet people, who showed no less heroism in the revival of the Motherland than on the battlefields of the Great Patriotic War, the ingenious planning and leadership of the post-war "great construction" in the USSR played a huge role. By the way, the first decisions concerning urgent measures to restore the national economy in the regions liberated from enemy occupation were adopted by the leadership of the party and the country and began to be implemented back in 1943. However, the pinnacle of the managerial skills of Stalin and his team was the famous "Law on the five-year plan for the restoration and development of the national economy of the USSR for 1946-1950", adopted in March 1946 by the decision of the Supreme Soviet of the USSR.

As part of the implementation of this truly grandiose plan, the very miracle that historians and economists admire to this day was performed. The plan was overfulfilled with interest. By 1948, Soviet industry was mainly raised from the ruins and began to work, and already in 1950, thanks to the restoration and creation of new enterprises in an amount exceeding 6200 objects, the level of industrial production in the USSR exceeded the pre-war figures not by 48%, as was originally envisaged, but by all 73%! Similar indicators, albeit less impressive, were achieved in agriculture. And this despite the terrible crop failure of 1946 caused by natural disasters. Nevertheless, even during it, the USSR did not buy bread abroad ...

From each victory and from each miscalculation, appropriate conclusions were immediately drawn. It was during this period that the "Stalinist plan for the transformation of nature" was adopted, which promised unprecedented prospects for the agrarians. There was a rapid development of Soviet science, which was indeed the most advanced in the world. It was then that the foundations were laid for the future fantastic breakthroughs of the Soviet country, such as space flights. At the same time, the armed forces did not fall apart, but developed and rapidly modernized. The USSR went to the creation of a nuclear weapons, intercontinental ballistic missiles, other advanced types of weapons and equipment.

Was all this a heavy burden on the shoulders of ordinary people? Judge for yourself, but only taking into account the real facts and figures. Such, for example, as a regular and very significant reduction in prices for almost all consumer goods, from food to motorcycles and televisions. A colossal program of housing construction was launched in the USSR, all conditions were created in the country for the development of an artel-cooperative movement, in fact, private entrepreneurship, which was under state control. Alas, it all ended in 1953. After the death of Joseph Vissarionovich, who was truly the Hero of Labor and Creation, the Soviet Union went from an incredible post-war takeoff to a fall into the abyss.

Ctrl Enter
Noticed oshЫbku Highlight text and press. Ctrl + Enter
We are
Chernobyl notebook. Part of 3Myths of the Great Patriotic. Why did the Stalingrad prisoners die?
Military Reviewin Yandex News
Military Reviewin Google News
178 comments
Information
Dear reader, to leave comments on the publication, you must sign in.