Passenger aircraft K-1: a good start for the future 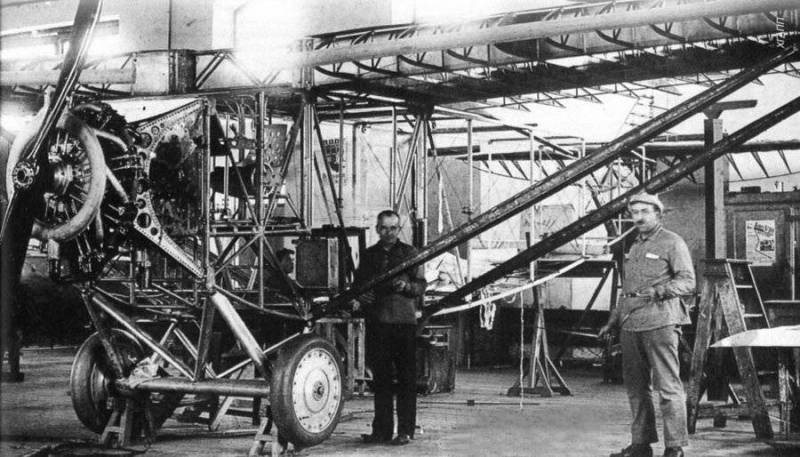 In 1923, the first postal and passenger station was opened in the USSR. aviation line. At first, civilian transportation was carried out only by foreign-made aircraft, but soon the development of its own technology began. One of the first domestic models in the field of civil aviation was the K-1 aircraft developed by K.A. Kalinin.

In 1923, the future outstanding designer Konstantin Alekseevich Kalinin moved to Kiev, where he entered the fourth year of the Polytechnic Institute, and soon got a job at the Remvozduh-6 aircraft repair plant. In his free time from study and work, he studied aircraft designs and promising technologies. Kalinin paid special attention to the elliptical wing - later it became the "calling card" of all his projects.

Soon after the move, K.A. Kalinin began work on his own passenger aircraft project. It was based on both the most modern and well-mastered solutions. The characteristic features of the project were an elliptical wing and the widespread use of metal in a mixed power set. By the name of the designer, the project was named K-1. The RVZ-6 index was also used - according to the name of the manufacturer. 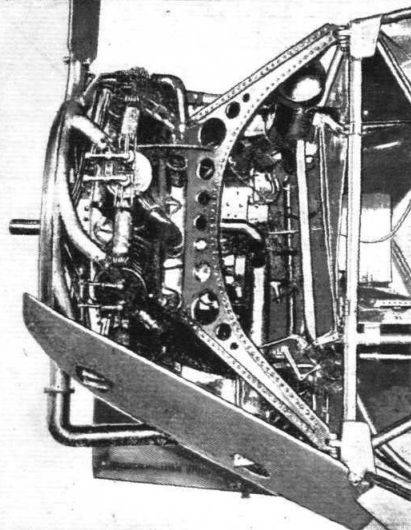 Motor mount with Salmson engine. Photo from Flight magazine - the foreign press was actively interested in the Soviet aircraft industry
The design took a long time, but it was successfully completed. After that, Kalinin and his colleagues D.L. Tomashevich, A.N. Gratsiansky and A.T. Rudenko started building a prototype aircraft. The construction was carried out directly at the Remvozdukhzavod in free time from the main work using available resources. Restrictions of various kinds again led to the delay in work. The plane was completed only by the summer of 1925. Almost at the same time, Kalinin graduated from the institute.

From the point of view of design, the K-1 was a single-engine high-wing strut-braced structure with a mixed wood-metal power set. The project used several original ideas that made it possible to obtain an increase in characteristics with a limited complication of the design.

The fuselage was made on the basis of a frame with a rectangular cross-section. Its bow, accommodating the cockpit and passengers, was made of steel pipes and sheathed with corrugated aluminum. The motor mount was made as a separate, easily removable unit. The tail boom was assembled from wood and covered with canvas. 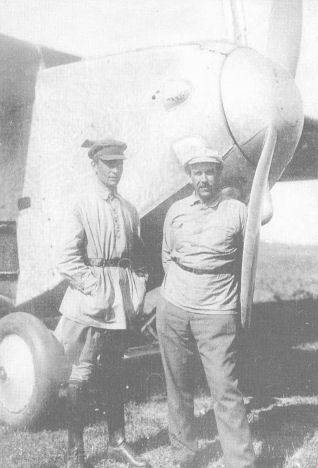 Pilot S.A. Kosinsky and designer K.A. Kalinin against the background of K-1. Photo Aviadejavu.ru
The wing had an elliptical shape. It differed from a straight wing in greater complexity of production, but it gave a gain in basic aerodynamic characteristics. The center section, connected to the fuselage, was metal, the consoles were wooden. Sheathing of planes - linen with plywood toe reinforcement. Mechanization included only ailerons. The braces were made of metal pipes with plywood fairings.

The elliptical stabilizer was made of wood and canvas, the keel was made of metal with a fabric covering. On the tail there were rudders of a traditional design. All rudders were controlled by cable wiring.

The glider received a two-wheeled chassis. Both wheels on a common axle were attached to the bottom, under the cab. There was a suspension on plate shock absorbers. A sprung crutch without a wheel was placed in the tail. 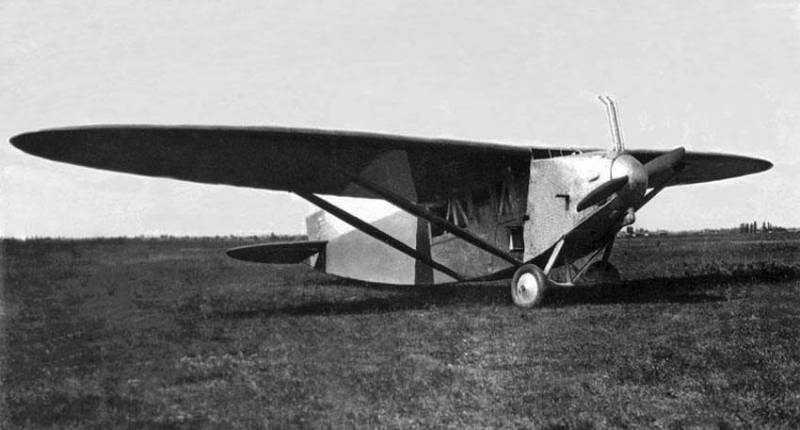 General view of the plane. Photo Airwar.ru
The K-1 used a foreign gasoline engine Salmson RB-9 with a capacity of 170 hp. with a two-blade wooden constant-pitch propeller RVZ-6. The fuel tank was in the center section; fuel supply - by gravity. Radiators were located on the sides under the cockpit and pushed into the stream.

Behind the power plant was a single-seat cockpit with the minimum required set of controls. The lantern with a folding top flap was at the level of the center section. The specific layout of the engine compartment and the cab impaired forward and downward visibility on the ground.

Behind the pilot's cabin there was a compartment for cargo or passengers. Access to the inside was provided by a door on the starboard side. There were two chairs at the front wall and in the middle of the cockpit, and a sofa at the rear wall. The plane could take on board 3-4 passengers. Glazing of a large area was envisaged in the sides.

On July 26, 1925, the K-1 aircraft took off for the first time; pilot S.A. Kosinsky. In the future, a number of flights were performed as part of factory tests and design refinement. After the completion of these activities, in September K-1 flew to Moscow to demonstrate to the leadership of the aviation industry, as well as for new tests - before starting service.

On the whole, the new tests passed without problems. The aircraft showed all its positive qualities, thanks to which it received a recommendation for serial production and operation in civil air navy... The procedures for organizing future production began - the search for a suitable site, the allocation of the necessary resources, etc.

Board view - you can see the emblem "RVZ-6". Photo Airwar.ru
At this stage, Kalinin and his colleagues began to improve the design before starting serial production. During its processing, the potential for further use in various fields was laid in the original design. So, an all-metal version of the aircraft, an ambulance and a lightweight multi-purpose vehicle were being worked out.

The first prototype K-1 was handed over to the Dobrolet company for operation on existing and future air lines. The machine successfully performed tasks for the transportation of passengers, delivery of goods and correspondence. It remained in operation until the early thirties - until the resource was exhausted, after which it was written off.

In September 1926, on the basis of the repair shops of the society "Ukrvozduhput" (Kharkov), a new enterprise was organized, later called "Civil Experimental Aircraft Manufacturing" (GROS). Subsequently, it became the Kharkov aircraft plant named after. SNK Ukrainian SSR. K.A. Kalinin was promoted to director and chief designer of the enterprise.

In the process of refueling. Photo Aviaru.rf
The GROS plant received an order for the production of five K-1s with the delivery of the first serial machine by March 1927. Kalinin and his colleagues decided to launch production with the simultaneous introduction of new solutions. They intended to build the first two aircraft according to updated projects - they were named K-2 and K-3.

Both modernization options provided for the replacement of the Salmson engine with a more powerful BMW-IV (240 hp), which improved flight performance. The K-2 aircraft was a K-1 with an all-metal fuselage - with a steel frame and a plating of chain mail. This design had some advantages, but was too complex to manufacture.

The K-3 project proposed the construction of a sanitary version of the K-1 with a German engine, a different layout of the passenger cabin and an additional hatch in the tail. He could carry up to four sedentary patients or two lying on a stretcher with an accompanying person. There was simple medical equipment.

The K-5 aircraft is the result of the evolution of Kalinin's passenger aircraft. Photo Airwar.ru
Due to various circumstances, the original K-1 never went into production - only an experimental aircraft entered service. The rest of the order was fulfilled through the construction of several passenger K-2 and one ambulance K-3. This technique was transferred to Dobrolet, where it was used until the resource was exhausted in the early thirties.

In 1923-25. K.A. Kalinin and his colleagues worked on the K-1 passenger aircraft project, and the first result of this work was the emergence of equipment of three types at once and for different purposes. In addition, in the K-1/2/3 projects, a very successful architecture and layout have been worked out, suitable for further development and use in promising projects.

Already in 1928, GROS began construction of the K-4 passenger aircraft, and subsequently produced almost 40 such aircraft. A year later, a series of K-5 aircraft was launched - by the mid-thirties there were approx. 260 units. Each new aircraft of Kalinin used the mastered developments, but was larger, heavier and more spacious than the previous one.

Thus, the original K-1 aircraft remained in a single copy and itself did not have much influence on the formation of the civilian fleet. However, he created a reserve for the creation of new projects - on its basis new mass aircraft were created, which quantitatively and qualitatively strengthened the air fleet during the period of its active construction and expansion.

Ctrl Enter
Noticed oshЫbku Highlight text and press. Ctrl + Enter
We are
On the basis of bombersAn-12 in Afghanistan
Military Reviewin Yandex News
Military Reviewin Google News
38 comments
Information
Dear reader, to leave comments on the publication, you must to register.