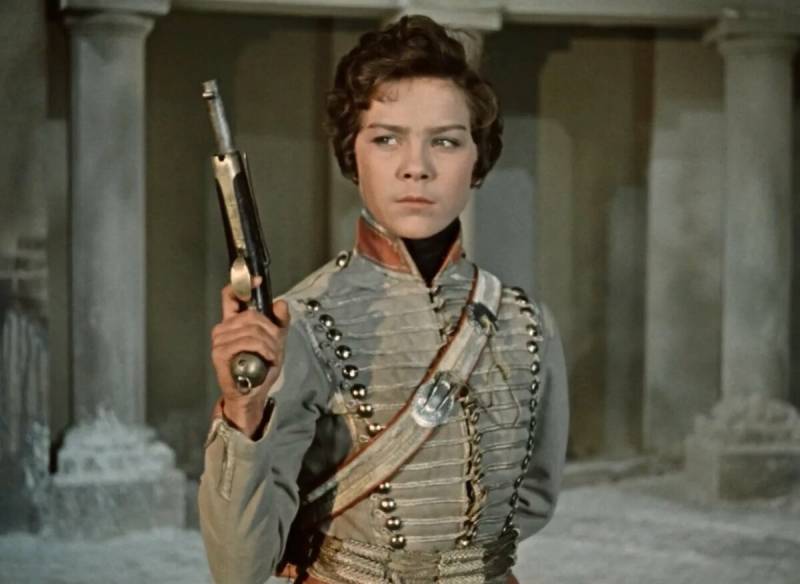 Shurochka Azarova with a pistol in the uniform of the Sumy Hussar Regiment. The film "Hussar Ballad" 1962

I am shot in the chest.
I have a package with the most important report.
Cornet, I ask you to finish the errand,
Given to me by the field marshal, and on the way
go immediately.
Hussar Ballad ", 1962

Weapon 1812 year. As everyone who has watched the movie "The Hussar Ballad" knows, Shurochka Azarova undertook to take the captain's package and ended up in the camp of the French cavalrymen, who rushed after her. But she used the two pistols she had and killed the two pursuers! In the movies it looks very impressive, but how did the pistols of the war of 1812 actually work? This is what our story will go about today.

So, cavalry pistols. At that time, the Russian cavalry was armed with a pistol of the 1809 model, which for some reason did not have a ramrod (it had to be carried separately!) And weighed quite a lot - 1500 g. The barrel had a length of 263 mm, that is, pretty decent. But the caliber and bullet he had from an infantry gun, so you can imagine its recoil when fired. That is, getting from it into someone at a distance could only be by chance. However, it was pistols that remained the only cavalry firearms at the time. The fact is that due to the shortage of rifles in the infantry (besides, they were also needed in the militia!) On November 10, 1812, rifles and carbines were taken from the cuirassier, dragoon and hussar regiments, although, taking into account the experience of foreign campaigns, the Russian army was later returned them again.

She couldn't shoot from such a pistol. Not by rank ... This is a soldier's model!
Well, AS Pushkin wrote very well how such a pistol was loaded in Eugene Onegin. We needed a cartridge, which in 1812 had the form of a paper cylinder, and a bullet and a charge of gunpowder were placed in it. For storing cartridges, a special cartridge bag served on the side or chest, like a hussar. When loading (and it was started by the command "Load!"), The trigger was put on the fuse, and the shelf (on French weapons it was brass, we have iron) on the side of the table, on which gunpowder should have been poured to ignite the charge in the barrel, must be open ... At the command "bite the cartridge" the infantrymen and horsemen took out another cartridge from the bag and tore off the bottom of the case with their teeth so that the gunpowder would not spill out and not soak it with saliva. Then some of the gunpowder was poured onto a shelf, and it was covered with a lid that served as a flint. If it was a gun, then they put it on the ground with the butt (the riders held it in balance!), And the remaining gunpowder was poured into the barrel. At the same time, it was important to knead the cartridge itself so that not a grain of powder remained in it, and then hammer the barrel with the same crumpled cartridge, inserting it after the bullet as a wad, which was usually simply rolled into the barrel. And it was here that a ramrod was required, with which they hammered both the wad and the bullet, while compacting the charge. In a rifled weapon, the bullet went along the barrel with difficulty, so it was hammered into it.

This is the kind of gun she should have given her ...
Above it is written "slaughtered", but this action had to be carried out carefully with both smooth-bore weapons and rifled ones. Careful - so as not to crush the powder grains, since then the gunpowder could turn into powder and at the same time either did not flare up at all (it happened that the then powder in the form of powder required free space inside the barrel!), That is, the weapon misfired, or on the contrary, it burned much faster than grain, and the recoil became stronger, and the fire of the gun could change. Then the ramrod had to be returned to its place, the trigger put on a combat platoon and ... shoot.

All pistols of that time were similar 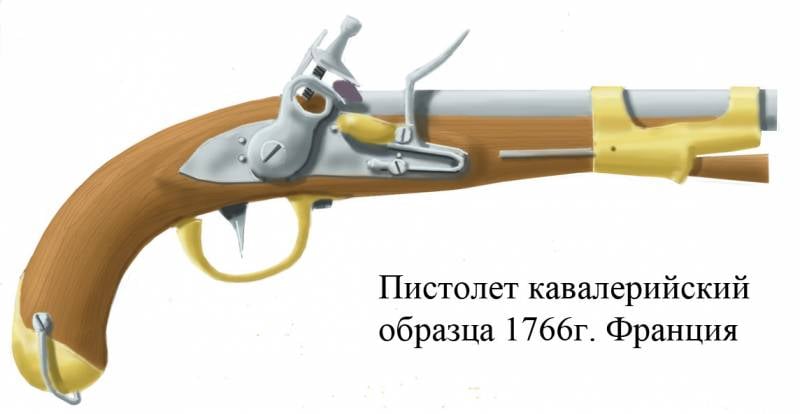 And they differed only in the amount of non-ferrous metal 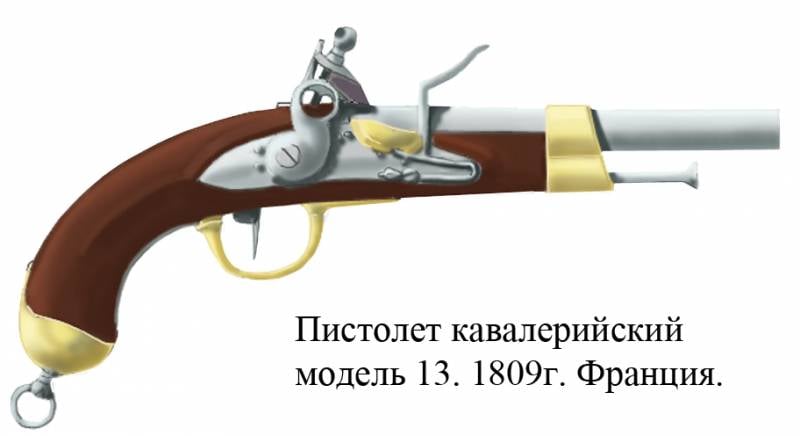 However, these manipulations seem difficult only in the description. An experienced shooter did all this very quickly. So one shot usually took about one minute. But this is on average. The soldiers of Frederick I, for example, fired two shots per minute, which surprised everyone else and brought this master many victories, and the most dexterous, for example, our Cossacks, even three, however, without aiming. 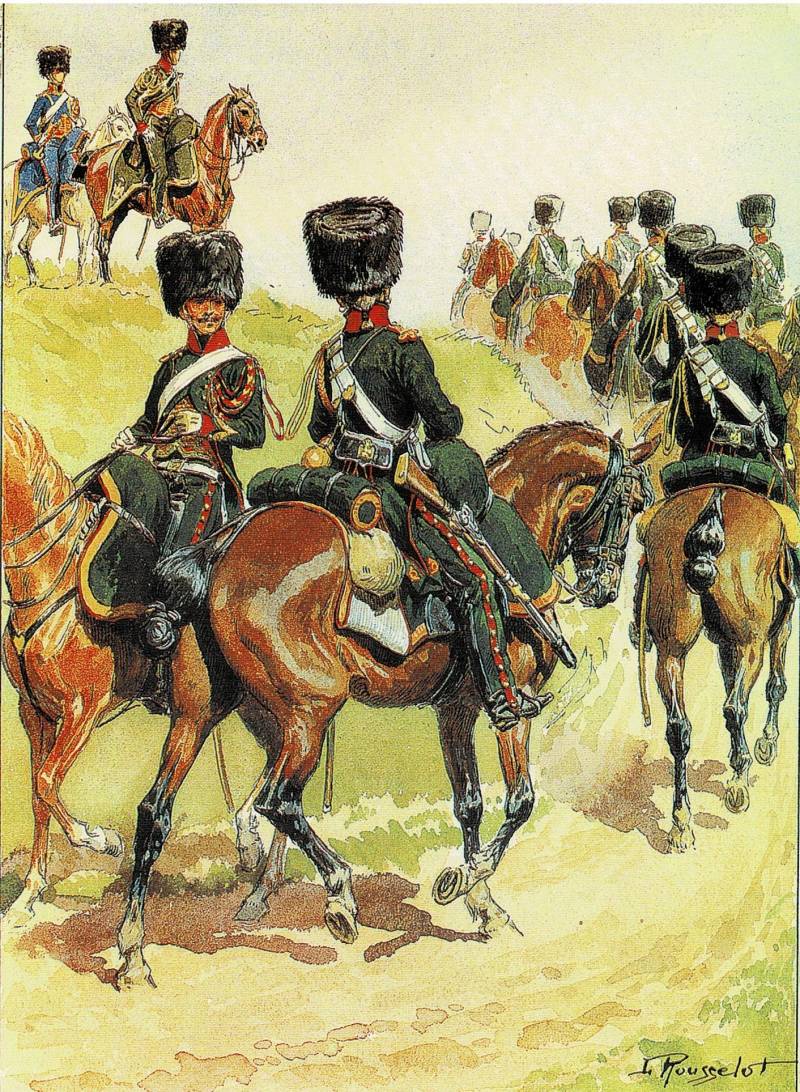 Lucien Rosello. Horse rangers of the imperial guard of Napoleon 1804-1815 Campaign 1806-1807 It was to them that the emperor entrusted the protection of his person and often put on their uniform, encouraging them to be more jealous in the service!
However, it was much harder for a cavalryman to do all this than an infantryman. Therefore, the riders loaded the pistols in advance and went to the battlefield in this form. There they just had to cock the hammer and pull the trigger. And if a gust of wind did not blow off the gunpowder from the shelf, if it did not dampen in a holster, then a shot followed, which could kill or seriously injure both the rider and his horse. 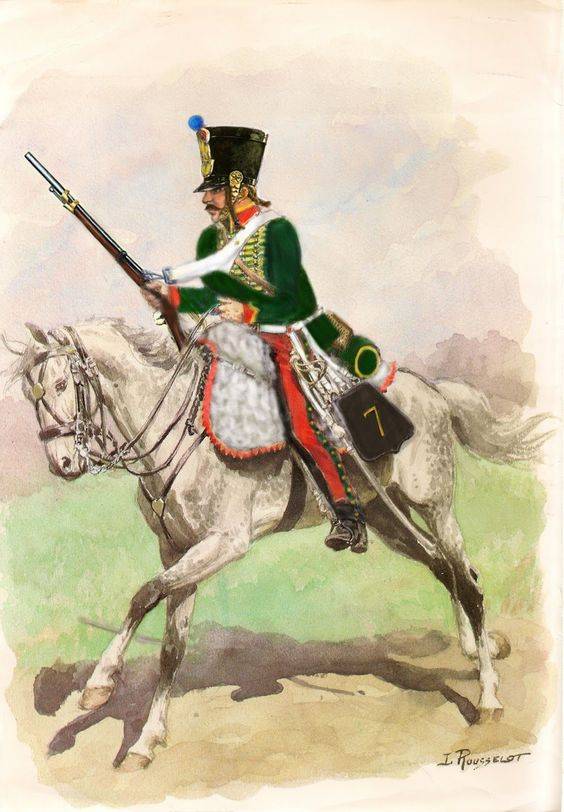 Lucien Rosello. Horseman of the French army
The loading of rifled flintlock rifles was carried out in approximately the same way, with the only difference that the bullet should first be placed on an oiled plaster made of leather or cloth and only then driven into the barrel by striking the ramrod with a special mallet. That is why the barrels of rifled guns were shorter than those of smooth-bore guns, and in the cavalry in the first place. And there, for the same carbines, the barrel length only slightly exceeded the barrels of pistols.

The weapons of the French horse rangers were such blunderbussies, and with a bayonet!
As for the effectiveness of a weapon with a flintlock, it was quite small. At a target of 180x120 cm, when shooting with aiming from 100 steps, an infantryman's gun gave on average 75% of hits, only 200% after 50 steps, and shots at 300 steps - some 25%. In the cavalry, the percentage was even lower, because there were less gunpowder charges. And shooting a pistol from a horse in 30 steps could hit a growth target unless by accident.

The aiming process itself was also difficult. Due to the peculiarities of the ballistics of flint weapons, 200 steps should have been aimed directly at the chest, at a distance of 250 steps - already at the head, 300 steps - at the very top of the enemy's headdress, but if the distance was more than 350, then slightly higher than his head. At the moment of the shot, a massive trigger with a flint hit the shelf cover and ... knocked down the aiming, and seed gunpowder flashed on the cover. All this wasted time, during which the shooter did not have to knock down the sight in any way. And only then the shot itself followed. That is, it was noticeably stretched in time, which also did not add accuracy to it. But the threaded fittings had a lower penetrating effect, since they had a reduced powder charge. But on the other hand, it was more convenient to hold them in your hands and shoot from them. Such are the subtleties of shooting in those years ...

It was very, very difficult to shoot in a strong wind, since he could blow off gunpowder from the shelf, and it was simply impossible to shoot in the rain. It got to the point that in 1812 the Tula Arms Plant began the production of rifles with shorter barrels, but with longer bayonets, with one goal - to get a higher rate of fire and to make it more convenient to use the gun in hand-to-hand combat. And the same must be said about the pistols of that time. 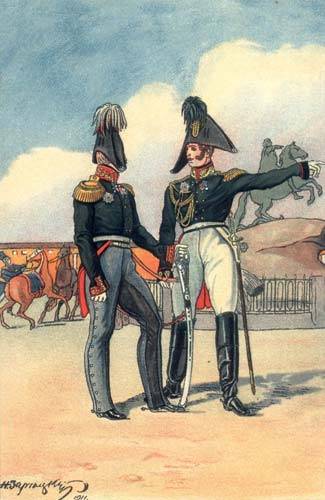 General of the light cavalry. Hiking form. General of the suite of His Imperial Majesty in the quartermaster department. Formal dress. Artist N.V. Zaretsky. 1876-1959. Russian army in 1812. SPb., 1912
Yes, at a distance of 50 m, their bullet, hitting the horse's head, killed him on the spot, but to make such a wonderful shot, knowing the result in advance, was absolutely impossible. So our brave Shurochka Azarova, who looked so wonderful in the film "The Hussar Ballad" in 1962 in the uniform of the cornet of the Sumy Hussar Regiment, would simply not have been able to hit two French cavalrymen with pistols at a gallop. Well, it would be fine, miraculously hit one. But in two ... This is science fiction. 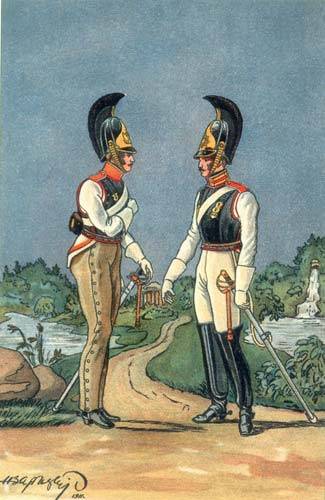 Private of the Yekaterinoslav cuirassier regiment. Hiking form. Private of the Life Guards Cavalry Regiment. Formal dress. Artist N.V. Zaretsky. 1876-1959. Russian army in 1812. SPb., 1912
By the way, loading from a muzzle was also extremely inconvenient because it was very difficult to determine whether your weapon was loaded or not. Each time it was required to open the lid of the shelf with gunpowder, and then a gust of wind, and your pistol was discharged at the most inopportune moment. And the ignition hole could also be contaminated with carbon deposits, and then the pistol (and the gun!) Also misfired. In addition, in the confusion of battle, the shooter could load the gun and pistol a second time. When fired, this led to the rupture of the barrel and, naturally, to injury, or even death of the shooter. 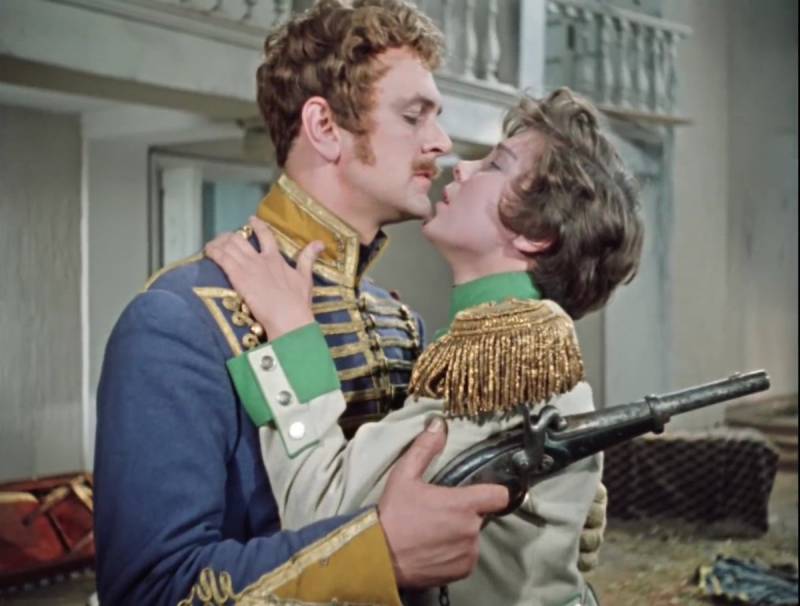 But in this shot from "The Hussar Ballad" it is very clearly visible that both Rzhevsky and Shurochka have "the wrong system" pistols. Rather, they are of a later time, because they are capsule, although the latter in the Russian army were altered from flint!
For example, during the American Civil War between the North and South after the Battle of Gettysburg, 12000 muzzle-loaded rifles were found, in the barrel of which there were two rounds driven one on top of the other. Moreover, in some of the barrels, the bullet was under charge, that's with what haste, without realizing it, their owners loaded them in this battle! Approximately 6000 rifles had 3 to 10 rounds. And in one gun they found ... 23 charges one after another! It was in what a stressful state they were, that they repeatedly loaded their gun, but did not fire shots, that is, did not pull the trigger. And if 23 charges, most likely, were loaded by some soldier-down, then this cannot be said about all the other guns! True, it is believed that such a problem with loading was more characteristic of muzzle-loaded capsule guns, but it is obvious that this could be with any weapon loaded in this way. It could well have been double or triple loading, and many suffered from this. But now we will never know how many such cases were.

Author:
Vyacheslav Shpakovsky
Articles from this series:
Thunderstorm of the twelfth year. Shotguns

Ctrl Enter
Noticed a mistake Highlight text and press. Ctrl + Enter
We are
Top 6 Guns To Carry 2018 of the YearWinchester: shutter and magazine (part of 1)
126 comments
Information
Dear reader, to leave comments on the publication, you must to register.