In 1934, the French Navy entered the newest cruising submarine Surcouf (NN 3) - at that time the largest ship of its class in the world, carrying the most powerful weapons. The submarine remained in service for several years, but during this time it was never able to reveal its potential.

The Washington Naval Agreement of 1922 limited the construction of large surface ships, but did not in any way affect the submarine fleet. As a result, in different countries, work began on the creation of the so-called. cruising submarines - submarines with developed large-caliber artillery weapons. Together with others, France took up this direction.

July 1, 1927 at the shipyard in Cherbourg was laid down the lead "artillery submarine" of the new project, named after the famous privateer Robert Surcouf. In the foreseeable future, it was planned to build two ships of the same type. Three submarine cruisers were created for raids on the communications of a potential enemy - independent and as part of ship groups. It was with this that the specific composition of the weapons on board was associated.

Submarine in configuration and painting 1932. Drawing by Wikimedia Commons
The Surcouf was launched in November 1929 and was soon taken out for testing. However, at this stage, the project encountered difficulties of a military-diplomatic nature. In January 1930, a conference was opened in London, which resulted in a new restrictive agreement. The London Naval Treaty introduced the maximum displacement of submarines and the permissible calibers of guns.

Paris was able to defend the already finished "Surkuf", but the construction of the next two submarines was canceled. The Navy command had to revise its plans and strategies.

Testing the submarine and correcting the identified deficiencies took a lot of time. Most of the problems were successfully eliminated, but individual shortcomings turned out to be fundamentally unavoidable. In this form, the fleet accepted the submarine in April 1934.

The Surcouf was a single-hull diesel-electric submarine with a number of unusual features. First of all, these are record sizes and displacement. The length was 110 m with a width of up to 9 m. The displacement on the surface was 3,3 thousand tons, in the underwater position - almost 4,4 thousand tons. Larger submarines appeared only in the mid-forties. 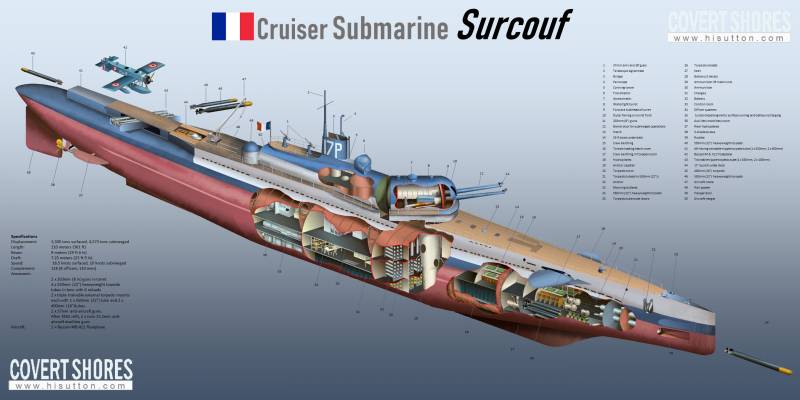 Ship architecture. Figure Hisutton.com
The ship received two Sulzer diesel engines with a total capacity of 7600 hp, which were used for movement on the surface and for charging batteries. The underwater movement was provided by two electric motors with a total power of 3400 hp. This power plant provided a surface speed of more than 18 knots and an underwater speed of up to 10 knots. The cruising range is 10 thousand miles on the surface or 60-70 miles under water. Diving depth - 80 m.

The boat was operated by a crew of 118 people, incl. 8 officers. The crew members were responsible for managing all systems, there were gunners, aviation group, etc. If necessary, an inspection group was formed from the sailors. The autonomy of reserves reached 90 days, which made it possible to make long trips and work in the ocean zone. A room for 40 passengers or prisoners was provided.

Of particular interest is the complex of weapons. Four 550 mm torpedo tubes were placed in the nose. In the stern, below deck, two movable blocks were provided, each of which included one 550 mm and a pair of 400 mm vehicles. Thus, on board there were 10 torpedo tubes of two calibers. The total ammunition load is 22 torpedoes. 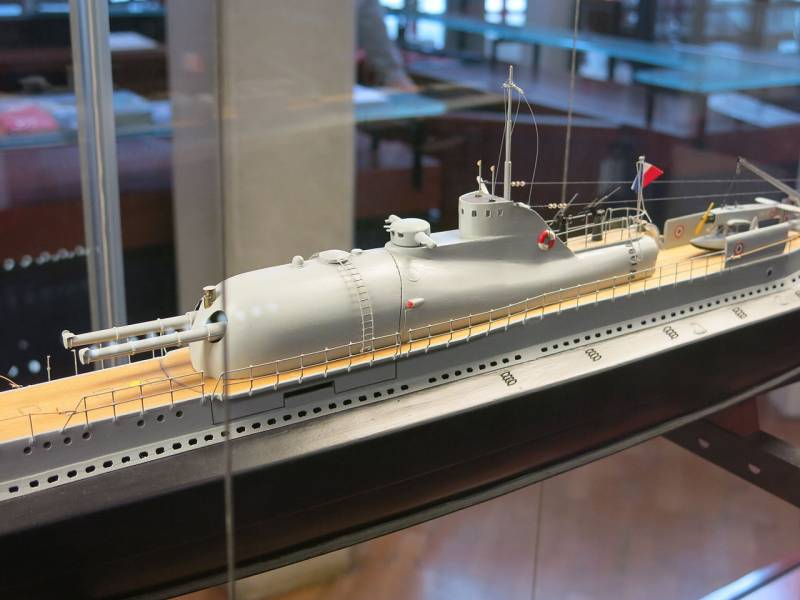 Boat model - superstructure with a tower close-up. Photo Wikimedia Commons
Instead of the traditional small-sized cabin, Surkuf received a large hermetic superstructure with partial armor. The nose assembly of the superstructure was a turret with two 203mm / 50 Modèle 1924 guns. Horizontal guidance was provided in a small sector. Inside there were stores for 14 rounds and stacks for 60 rounds.

An optical rangefinder with a base of 5 m was placed behind the tower on the superstructure. Due to its position, the viewing, measurement and firing range was limited to 11 km. When using a periscope, the range of fire increased to 16 km. However, on ships with better controls, the Mle 1924 cannon hit 31 km.

According to the project, the bulk of the preparation for firing could be carried out at periscope depth. After surfacing, only fine aiming and some other procedures were required. It took only a few minutes to fire the first shot after surfacing. After firing at the minimum time, the boat could go under water. 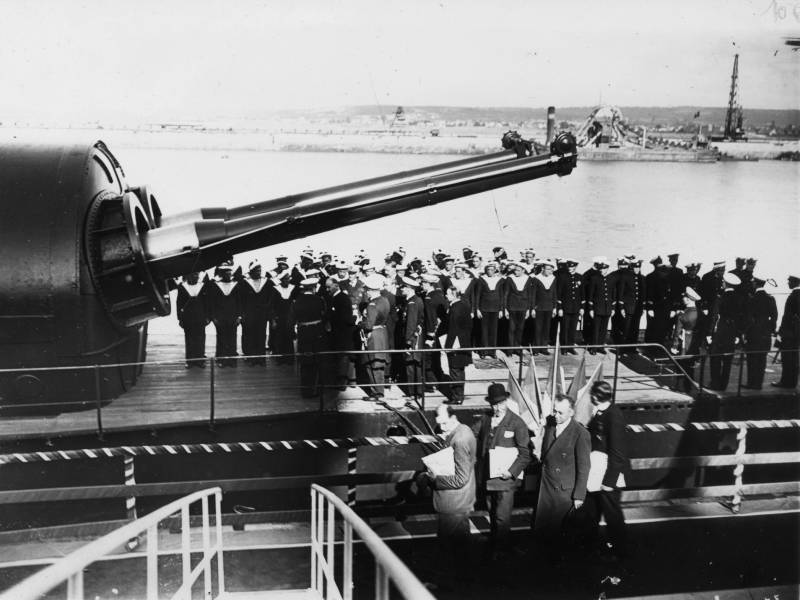 Crew formation on deck. It is curious that there is no fairing on the turret. Photo Survincity.com
Anti-aircraft weapons were installed on the superstructure. Its composition was refined, and as a result, the submarine received a pair of 37-mm Mle 1925 anti-aircraft guns and four Hotchkiss M1929 heavy machine guns.

A compartment for the boat was provided under the deck. The aft part of the superstructure was a sealed hangar for the Besson MB.411 seaplane. It was proposed to use it for finding targets and adjusting fire.

Tests of the Surcouf submarine lasted from 1929 to 1934, and during this time a number of problems of various kinds were revealed. Not everything was fixed. So, until the very end of operation, there was a problem with the supply of spare parts and parts. "Surkuf" had minimal unification with other submarines, and therefore the necessary products, up to the elements of fasteners, often had to be made "on an individual order."

Demonstration of turning the tower. Frame from newsreel
It turned out that the submarine is not stable enough. On the surface, the heavy superstructure with cannons and a hangar led to swaying. In the submerged position, efforts had to be made to keep the ship on an even keel. The submersion took several minutes, which gave the enemy a chance for a successful return volley.

Imperfect fire control facilities did not allow the full potential of the 203-mm guns to be realized - the firing range was far from maximum, the firing angles were seriously limited, and the use of guns at night was impossible. The aiming of the gun at periscope depth led to depressurization of the connections and threatened the boat. Accurate shooting was difficult during excitement. At the same time, the roll with a roll of more than 8 ° excluded the possibility of turning the turret.

The first years of service of "Surkuf", despite all the problems, passed quite calmly. The crew mastered the technique and learned to deal with its shortcomings. The submarine regularly participated in exercises, incl. with torpedo and artillery fire. Outings to the sea and long voyages were constantly made. 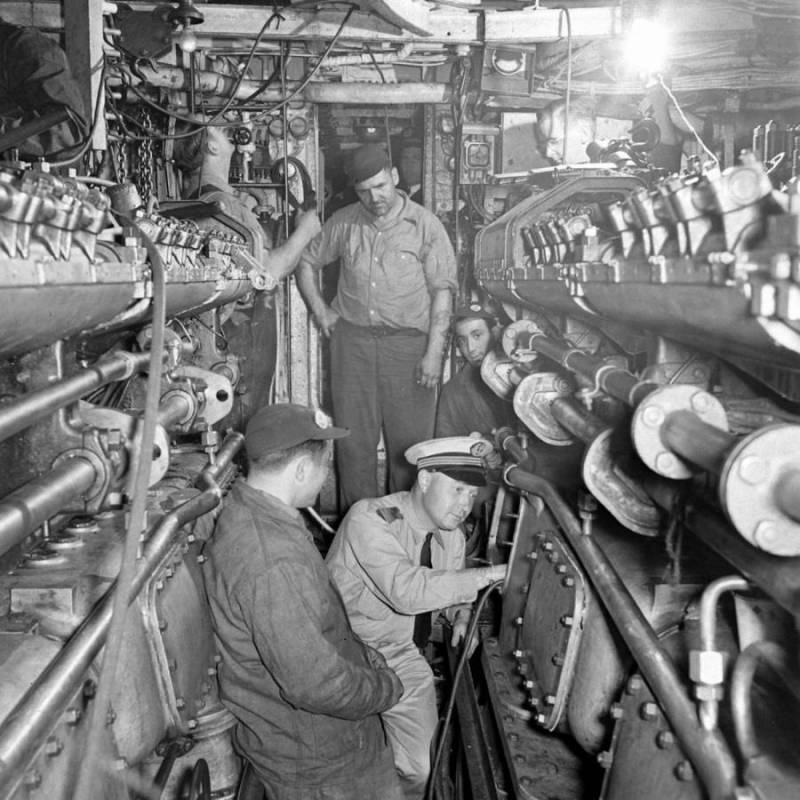 The interior of one of the compartments. Photo Lasegundaguerra.com
The cruising submarine with unique weapons quickly became a symbol of France's naval power. She was gladly shown in the press, and also organized friendly visits to foreign ports.

In mid-1939, Surcouf crossed the Atlantic to Jamaica. In September, an order was received to prepare to return home as part of the escort force of one of the convoys. A few weeks later, the boat arrived at the base in Cherbourg, where it remained until spring. In May, almost simultaneously with the German attack, the ship was sent to Brest for repairs in dry dock conditions.

The work was not yet completed, but the German army was approaching, which could lead to the loss of the ship. The crew decided on a real gamble: with one working diesel engine and an inoperative rudder, the boat crossed the English Channel and came to Plymouth.

On July 3, the French submarine became one of the targets of the British Operation Catapult. An attempt at the armed capture of the Surkuf ended in success, but three Englishmen and one French sailor were killed in the shootout. The divers were offered to join the Free France, but only 14 people expressed such a desire. The rest were sent to an internment camp. Before leaving the ship, they managed to destroy the documentation and damage some of the systems. 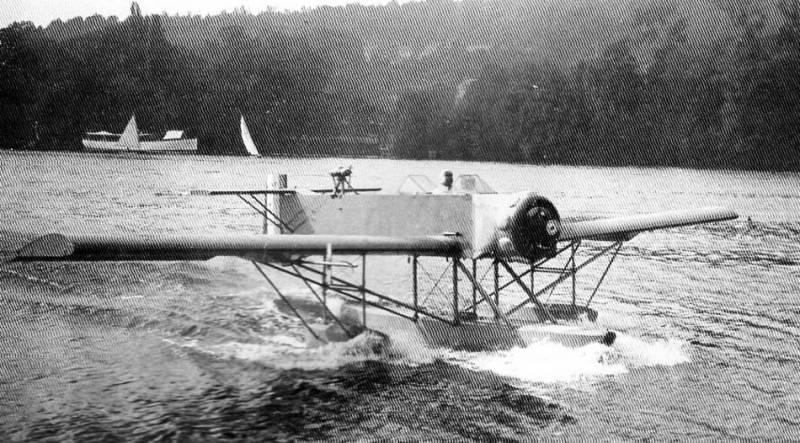 Reconnaissance aircraft Besson MB.411. Photo Airwar.ru
In August, repairs were completed and a new crew was formed. Due to the lack of specialists, many seamen from civilian ships entered it without any experience of service in underwater navy... Political disagreements related to the organization of the Free French Navy, combat service, etc., became a serious problem. The situation on board gradually heated up, the number of violations increased, and the morale fell. Seeing all this, the command of the British KMVF began to doubt the need to keep the "Surkuf" in the ranks.

By the end of 1940, Surcouf was transferred to Halifax, Canada, from where the boat was supposed to go out to escort Atlantic convoys. A similar service continued until July 1941, when the ship was sent to American Portsmouth for repairs. Technical difficulties led to a delay in the work, and a new campaign was started only at the end of November. This time the submarine was included in the naval group, which was to take control of the islands of Saint-Pierre and Miquelon.

The new 1942 crew met in Halifax. At this time, the Free French command and the KVMF were discussing his further service. It was decided to transfer "Surkuf" to the Pacific Ocean to strengthen the Allied naval grouping. 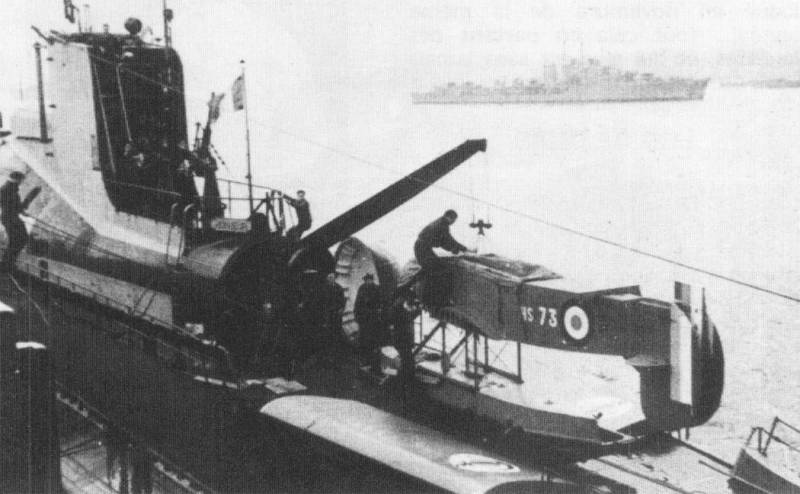 Working with an airplane on deck. Photo Airwar.ru
On February 2, the submarine left Halifax and headed for Bermuda. On February 12, we started the next part of the route, laid through the Panama Canal. Then it was necessary to arrive at about. Tahiti and from there head for Australian Sydney. The latter was to become a new base for submariners.

On the night of February 19, the submarine with its entire crew went missing. On the same day, SS Thompson Lykes reported a collision with an unidentified object. The version of the collision of a submarine with a ship became the main one. However, others also spoke up. The submarine could die as a result of a mistaken attack by American anti-submarine forces, a riot could occur on board, etc.

The cruising submarine Surcouf (NN 3) was in service from 1934 to 1942 and during this time did not show any special results - but managed to prove itself not from the best side. The ship was regularly involved in exercises, and since 1940 it had to go to sea as part of real operations. 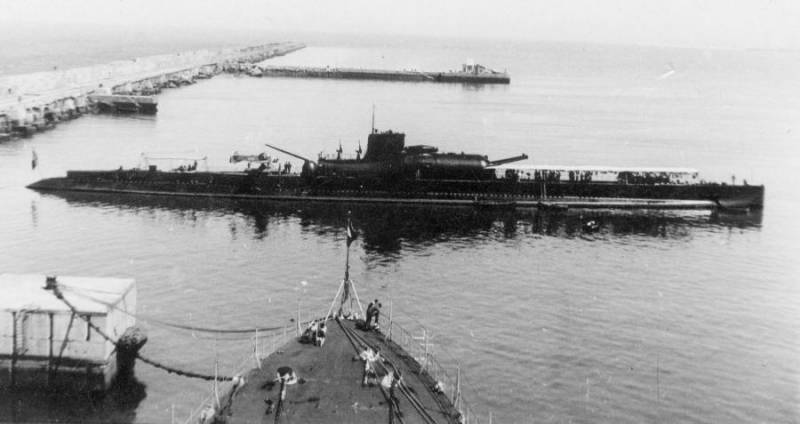 Submarine "Surkuf" in the port. Photo Survincity.com
During the construction of the submarine cruiser, the main focus was on increasing the firepower of artillery systems. This task has not been fully solved. The submarine received two 203-mm cannons, but their use according to the intended methods turned out to be impossible due to limitations in performance and the risks of flooding.

Throughout the entire period of service, the largest French submarine had only various targets in combat. Not a single victory in a real battle - with the use of torpedoes or cannons - was achieved. First of all, this is due to the fact that "Surkuf" has never been used for its intended purpose - to disrupt the enemy's sea communications. However, participation in the escort of convoys, even without the defeat of enemy ships and submarines, in itself brought serious benefits.

Thus, the unique, but controversial submarine, which had a specific ratio of characteristics, only helped to a limited extent in the fight against the enemy. Perhaps the situation could have changed, but on the night of February 19, 1942, in her stories the point was put. The most interesting and promising combat unit in France was killed in unclear circumstances.