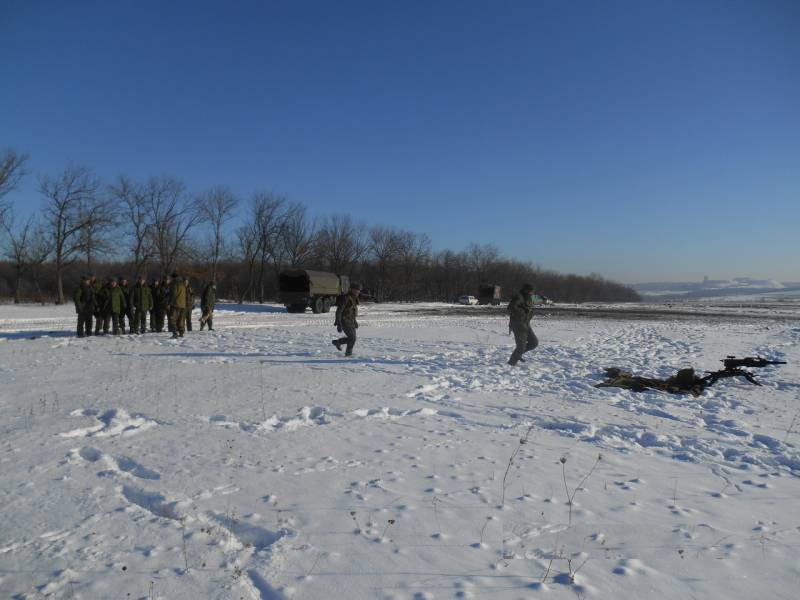 The LDNR is once again discussing the possibility of announcing a military conscription. This important issue was raised by the deputy of the People's Council of the DPR Vladislav Brig, however, sources claim that the poll in the deputy's telegram channel appeared for a reason and that the people's militia is already seriously talking about the imminent conscription for military service. So, the blog "Lugansk Insider" writes:

“On the twentieth of July, the soldiers of the People's Militia of the LPR were read out a ceasefire order at the formation, where, among other things, they said that they should prepare to receive conscripts in the fall. Apparently, there was a similar action in the DPR. "
It is worth noting that such conversations have arisen more than once, but until now everything has stopped at the level of discussion. But who knows, maybe this time the military will move from words to deeds and in the republics will indeed announce a call. The LDNR has grown up young people who know firsthand what war is, knows who started it and is ready to defend their land.

Will they run - won't they run?

Frankly speaking, such a “school of life” would not hurt the youth in the republics, and the people's militia would be of use (at least to free the soldiers from internal service). However, the question is how young people themselves and their parents will respond to the call. Let's not talk about extremes (after all, if someone leaves for Ukraine in order to avoid conscription, it means that he has nothing to do in the LPNR from the outset. Even the most patriotic citizens will be very interested in whether the recruits will end up on the front line? And an even more important question: will they not end up on the front line with an order “not to respond to provocations” under Ukrainian artillery fire?

No less important is the following point: now the inhabitants of the LPR are actively receiving Russian citizenship. Will service in the people's militia become a reason for not then doing military service in Russia? Or will you first have to serve in the conditional Torez, and then another year already somewhere in the vast expanses of the Russian Federation? Isn't it wiser in this case to immediately go to serve in the Russian Federation?

How balanced and thoughtful is such a decision? Is this a conceptual change or a situational attempt to compensate for the lack of personnel? The Donetsk blogger Sniper-Poet, who is personally familiar with the hardships of service both in the ranks of the Russian army and in the DPR militia, believes that this is precisely the need to staff the people's militia.

“Large staff shortage? We will supplement the conscripts and send a "peermozhny" report on the completion of all staff units. Will the check come? Overnight, we collect a report from conscripts for transfer to contract service and submit, so that later these reports can be sent to the toilet for an indirect purpose ... This quite exists in one of the most powerful armies in the world (no irony), where the BTGR of motorized rifle regiments is filled only on paper for an annual check and the personnel of the contractors wander through the papers from unit to unit, depending on which direction will be checked today: tankmen, snipers or scouts ”,
- the blogger writes.

Indeed, serious concerns are caused by the readiness of the Luhansk and Donetsk military to organize the process of passing military service in such a way that the first draft does not become the last. In the ranks of NM today, as a rule, there are adults motivated, if not by a desire to fight, then at least by dreams of a career or by the need for monetary allowance. Therefore, they more or less steadfastly withstand both the stupidity of the command and the hardships of a long stay at the range (there is such a tradition among the local leadership - to send soldiers to live at the range for weeks, or even months at any time of the year). But whether young people will tolerate all this, who, as an alternative, will at least leave for the Russian Federation - that is the question.

In addition, it is not entirely clear how the conscription is consistent with the letter of the Minsk agreements. There is no doubt that the Ukrainian side will arrange a form of hysteria about this (or even take it as a long-awaited argument for withdrawing from the agreements). Probably, if the call is still announced, it can be regarded as a signal for the end of the Minsk epic and (almost 100%) as preparation for a big war.

The first thing that needs to be clarified: are the talks about an imminent military conscription just the fantasies of the local "jackets" or is it a real directive from higher comrades? The fact that the issue was raised almost simultaneously in the LPR and the DPR may mean that it is not about a local initiative, but about a more global solution. We will continue to observe: very little is left until autumn.

Ctrl Enter
Noticed oshЫbku Highlight text and press. Ctrl + Enter
We are
Situational analysis of the death of the MH17 flight (Malaysian Boeing 777), made on the basis of engineering analysis from 15.08.2014Results of the week. “In our cooperative, the board is always agreed”
Military Reviewin Yandex News
Military Reviewin Google News
22 comments
Information
Dear reader, to leave comments on the publication, you must to register.