From "Challenger 2" to "Armata": comparison of modern tanks in terms of specific power 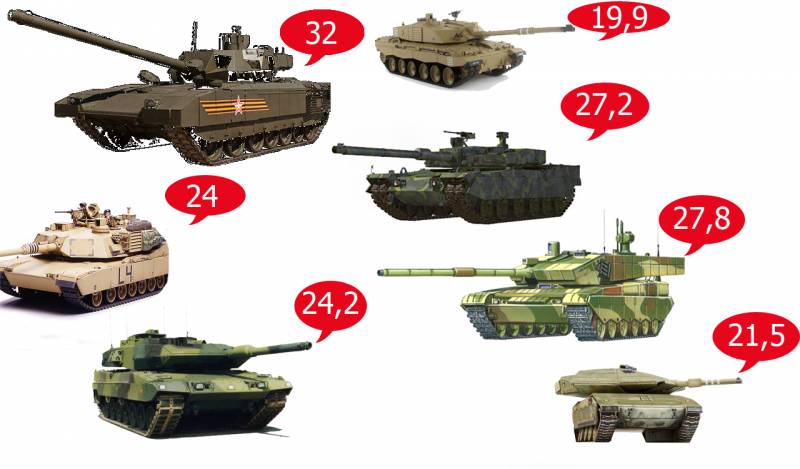 One of the main characteristics tank is its power density. This indicator allows you to assess a wide range of specific capabilities of the tank, including its ability to move quickly over rough terrain and maneuverability. In addition, the specific power of the tank makes it possible to estimate the fuel consumption when performing a march or a combat mission.


We present the comparative characteristics of modern tanks in terms of power density.

Russian new generation tank T-14 "Armata". The specific power of this MBT, which differs in the location of the crew not in the turret, but in a special armored capsule in the front of the tank, is about 32 hp per ton.

The latest modification of the American M1 Abrams tank is provided with a specific power of 24 hp. per ton.

The German Leopard 2 main battle tank is slightly superior to the American "Abrams" in this regard. Its power density is estimated at 24,2 hp per ton.

American and German tanks significantly outperform the Chinese Type 99 in terms of power density, including the Type 99A modification. Its indicator is 27,8 hp / t.

But the French "Leclerc" by this indicator is comparable to the Chinese combat vehicle - 27 "horses" per 1000 kg of mass. The South Korean K27,2 "Black Panther" has about the same figure - 2.

Indian "Arjun" of the latest model in terms of power density is estimated at 24 hp. per ton - in this regard, a complete analogue of "Abrams".

The outsiders in terms of power density among modern tanks include the Israeli tank "Merkava" with a "result" of 21,5 hp. per ton, as well as the British Challenger 2 with less than 20 hp / t.

Thus, the distribution of tanks by specific power can be characterized as follows: from Challenger 2 to Armata.
Ctrl Enter
Noticed oshЫbku Highlight text and press. Ctrl + Enter
We are
Bundeswehr began upgrading tanks to the version of Leopard-2 A7VIn the upcoming 4-year period, sales of new MBTs will be more than 1,5 thousand units. worth 9 billion dollars
51 comment
Information
Dear reader, to leave comments on the publication, you must to register.