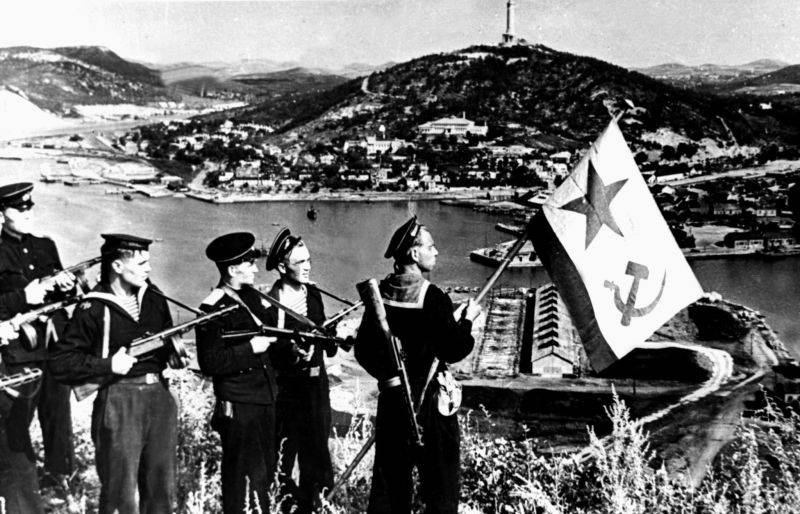 75 years ago, on August 8, 1945, the Soviet Union, fulfilling its allied obligations, declared war on Japan. On August 9, 1945, the Red Army began hostilities in Manchuria.

Contrary to the myth of Japanese and Western historiography about "sudden Russian aggression" against Japan, in reality Tokyo knew about it. First came intelligence information about the decision of the conference in Yalta: the USSR pledged to go to war with Japan on the side of the allies. In mid-February 1945, Japanese intelligence informed the Supreme Defense Council that Moscow planned to secure itself a voice in the future of East Asia. It was concluded that the Russians would terminate the non-aggression pact and side with the United States and Great Britain. The Japanese Foreign Ministry drew the same conclusion.

Preparing for a war with Japan, Moscow tried to comply with the norms of international law. On April 5, 1945, Tokyo announced the termination of the Soviet-Japanese neutrality pact of April 13, 1941. The Soviet government noted that the pact was signed before the German attack on the USSR and before the Japanese attack on the United States and England. Now the situation has changed radically. Japan, as an ally of Germany, helped the Germans in the war with the USSR and attacked the USA and England, Moscow's allies. Having broken the non-aggression pact four months before entering the war, Moscow actually informed the Japanese about the possibility of the USSR participating in the war with Japan on the side of the Anglo-Americans. In Tokyo, this was well understood. Therefore, the desire of modern propagandists (including Russian ones) to accuse the USSR of "treacherous aggression" has no basis.

It was impossible to hide Russia's preparations for the war in the Far East. Since the spring of 1945, the Japanese military-political leadership has regularly received intelligence reports on the redeployment of Soviet units and equipment to the east of the country. However, Tokyo decided to continue the war. The Japanese hoped to the last (like Hitler) for a compromise peace with the United States and Great Britain. In particular, the Japanese wanted to retain Taiwan and Korea. Also, the Japanese tried to use Moscow as a mediator in peace negotiations. Moscow had obligations to the allies and rejected such proposals. In July 1945, the Soviet government rejected a mission by former Japanese Prime Minister Prince Fumimaro Konoe and a message from the emperor.

On July 26, 1945, the Potsdam Declaration of the countries at war with the Japanese Empire was published, which set out the conditions for its unconditional surrender. The day before, her text was broadcast on the radio and was known in Tokyo. Moscow planned to join the declaration, but to announce it later. This raised some hope in the Japanese government. In particular, the Japanese wanted to offer Russia to return South Sakhalin and the Kuriles. On July 28, at a press conference, Japanese Prime Minister Kantaro Suzuki said that the empire ignores the Potsdam Declaration and will continue the war. This dragged out the Second World War and led to new victims. Therefore, in accordance with the obligations given to the allies, the Soviet Union declared war on Japan on August 8, 1945. 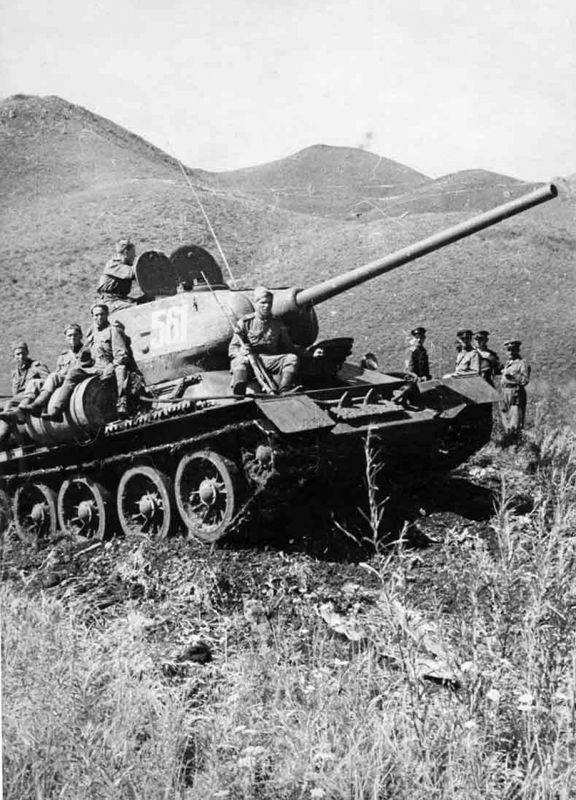 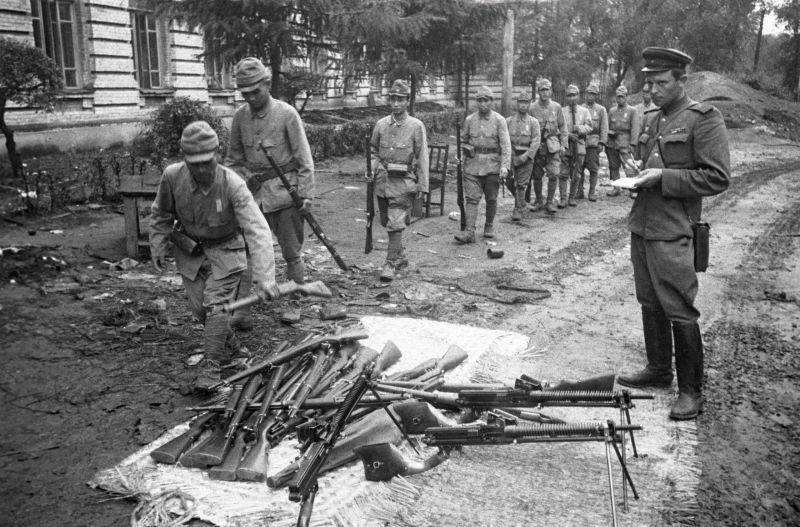 The Russians in the Far East were opposed by the Kwantung Army stationed in Manchuria and Korea. The Kwantung Army was operatively subordinate to the army of Manchukuo, the troops of Inner Mongolia, and the troops on Sakhalin and the Kuril Islands. In total, our troops were opposed by 48 infantry divisions (calculated), 8 cavalry divisions (calculated), 2 tank brigades; combat strength - more than 1,3 million people, more than 1,1 thousand tanks, more than 6 thousand guns, aircraft - 1900, ships - 25. Japanese troops had high combat effectiveness, the personnel were brave, disciplined, fanatically loyal to the emperor. On the border with the USSR and Mongolia, the Japanese had 17 powerful fortified areas with 4500 permanent fortifications. Also, the Japanese had biological weapons of mass destruction. The Japanese could use mountain systems and numerous rivers in defense.

The Soviet high command prepared two main counter strikes from Mongolia (Transbaikal Front under the command of Marshal Malinovsky, troops of the Mongolian People's Revolutionary Army of Marshal Choibalsan) and from Primorye (1st Far Eastern Front of Marshal Meretskov). The troops of the 2nd Far Eastern Front of General Purkaev delivered an auxiliary strike from the regions of Khabarovsk and Blagoveshchensk. The operation also involved the Pacific Fleet under the command of Admiral Yumashev and the Amur Flotilla of Rear Admiral Antonov. The general command of the operation was carried out by the High Command, headed by Marshal Vasilevsky. The USSR created a powerful grouping in the Far East: 1,6 million people, 5,5 thousand tanks and self-propelled guns, 26 thousand guns and mortars, more than 1 rocket artillery installations, and more than 5 thousand aircraft.

In general, the Japanese troops had no chance against the Russians. It is not only a matter of the numerical and material-technical superiority of the Red Army. The Soviet troops, which with fierce battles retreated to Leningrad, Moscow and Stalingrad, and then "rotated the Earth", "took away our spans and crumbs", were invincible at this time. The skill of the command, officers and soldiers was forged in the best school - the German one. The pupils have surpassed the teachers at a huge price. The Japanese army had no chance in this battle. In addition, the Russians repaid the debt - for Port Arthur and Tsushima. 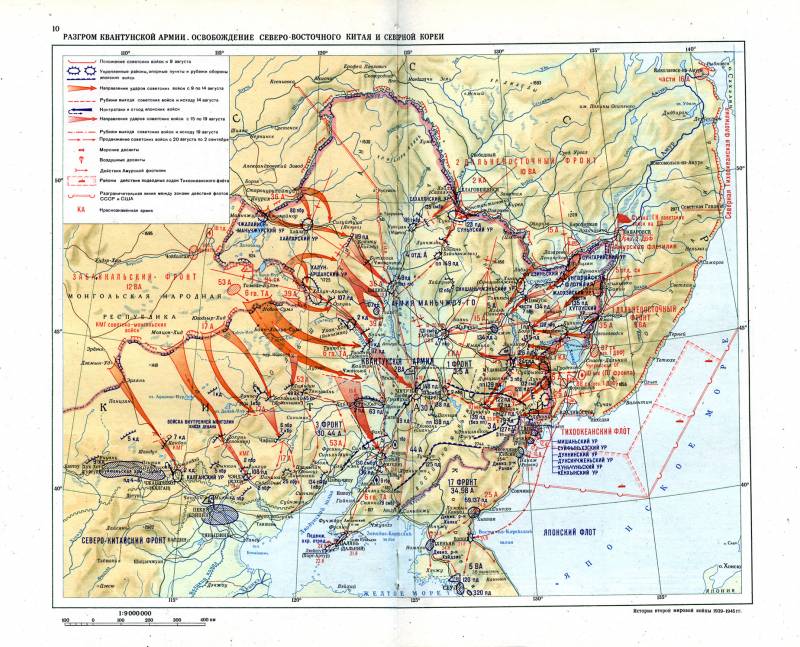 On August 9, 1945, the troops of the three Soviet fronts went on the offensive. The battles against the Japanese took place on a front with a length of over 4 thousand kilometers. Our Pacific Fleet cut the enemy's sea communications. Aviation struck at enemy fortifications, headquarters, communications and communications centers, airfields and ports. On the very first day of the offensive, the enemy's defenses were hacked. In the zone of the Trans-Baikal Front, our mobile units covered up to 50 km on the very first day. Having penetrated deep into the enemy's defenses, overcoming the passes of the Greater Khingan, Russian troops dissected the 3rd front of the Kwantung Army (30th and 44th armies). The offensive developed without interruption. By August 14, our troops covered 250-400 km and reached the Central Manchurian Plain.

The 1st Far Eastern Front was moving in the Harbin-Girin direction. Our troops had to overcome not only enemy resistance, but also mountains, taiga and off-road, rivers and swamps. Stubborn battles were fought in the area of ​​the city of Mudanjiang, where the Japanese pulled together a large group. The Japanese did their best to keep the approaches to the main cities of Manchuria: Harbin and Girin. Marshal Meretskov decided to bypass Mudanjiang and direct the efforts of the main group to Jirin. By August 14, our troops advanced 120-150 km. The Japanese front was cut. The troops of the 2nd Far Eastern Front also successfully advanced, crossing the Amur and Ussuri, taking a number of cities. On August 11, the operation to liberate South Sakhalin began. 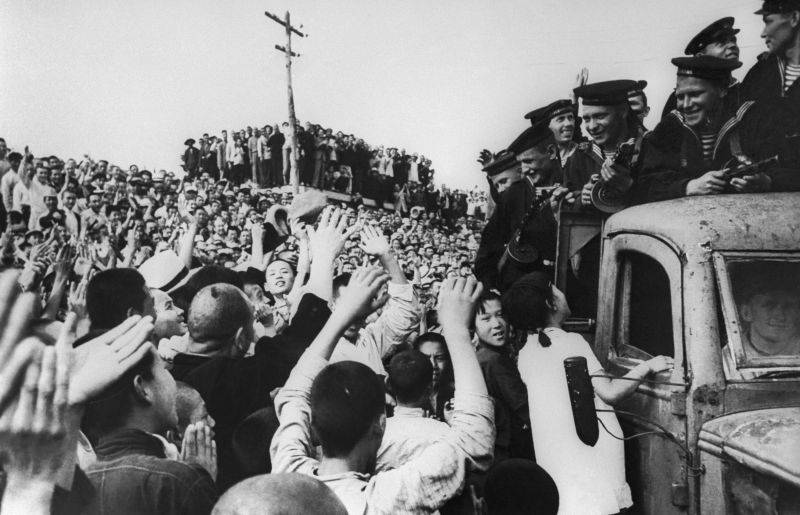 Harbin residents welcome the sailors of the Amur military flotilla 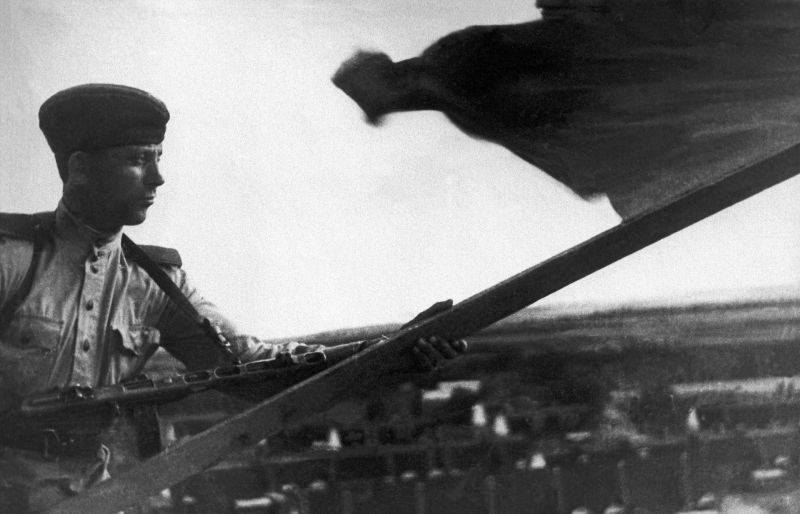 Port Arthur is ours!

The entry into the war of the USSR completely demoralized the Japanese top leadership. On August 14, 1945, the Japanese government, having suppressed the resistance of the "irreconcilable", decided to unconditionally surrender, accepting the terms of the Potsdam Declaration. On August 15, an imperial decree of surrender was broadcast on the radio. On August 16, 1945, the commander of the Kwantung Army, General Yamada Otozo, ordered his army to surrender after receiving an order from Emperor Hirohito. True, not all Japanese units laid down their arms at once, some of the troops fought stubbornly for several more days or until the end of August - beginning of September.

As a result, the Soviet armies crushed the enemy defenses and liberated Manchuria and Korea. On August 19, our troops liberated Mukden, on August 20 they took Jirin and Harbin, on August 22 - Port Arthur, on August 24 - Pyongyang. Sakhalin was liberated from the invaders by August 25, the Kuriles at the beginning of September. They planned to land troops on Hokkaido, but the operation was canceled.

Thus, the Red Army made a decisive contribution to the defeat of the Japanese Empire. The Russian blitzkrieg deprived the Japanese elite of the chances of continuing and dragging out the war in the hope of a compromise peace with the West. He thwarted plans for a "bloody battle for the mother country", the transfer of reinforcements to Japan from China, the evacuation of the Japanese leadership to Manchuria, and the unleashing of biological and chemical warfare. The Soviet Union stopped the Second World War and saved millions of lives, including the Japanese themselves (the Japanese nation from complete exsanguination).

Stalin took Russian revenge for Port Arthur and Tsushima. Russia repaid to Japan the debt of 1904-1905, the Japanese intervention during the Civil War. I regained the Kuriles and South Sakhalin. Returned to Port Arthur. Russia regained its position as a great power in the Far East, in the Pacific Ocean. Got the opportunity to create friendly regimes in Korea and China. 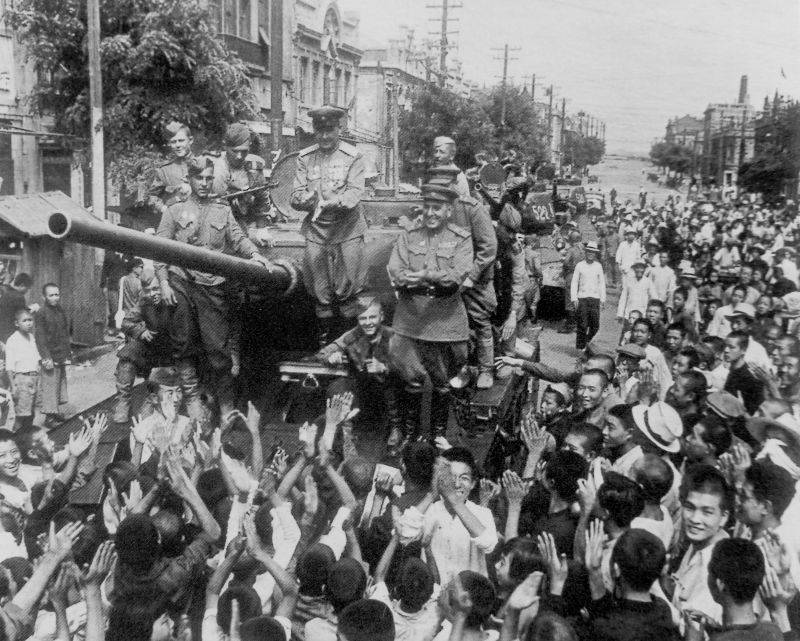 The population of the Chinese city of Dalian (Dalny, Dairen) joyfully greets the tankmen of the Soviet 7th Mechanized Corps of the 6th Guards Tank Army 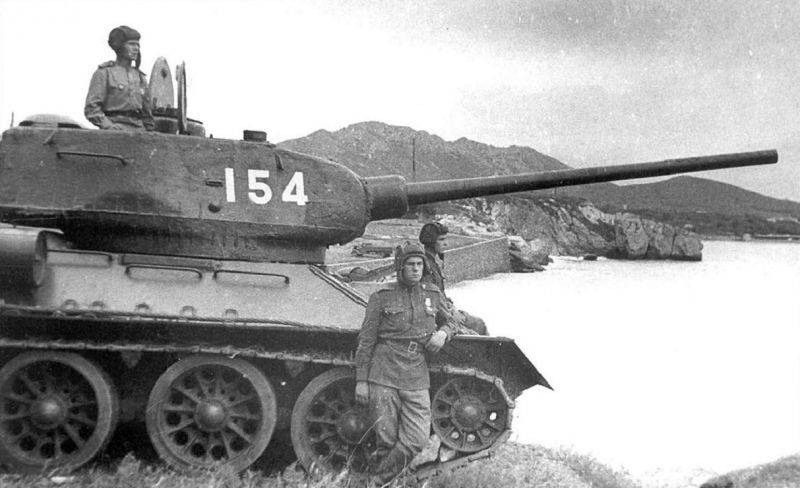 Ctrl Enter
Noticed oshЫbku Highlight text and press. Ctrl + Enter
We are
Chernobyl notebook. Part of 3Diplomats of the People's Commissariat of Defense: on the eve and during the war
Military Reviewin Yandex News
Military Reviewin Google News
105 comments
Information
Dear reader, to leave comments on the publication, you must to register.