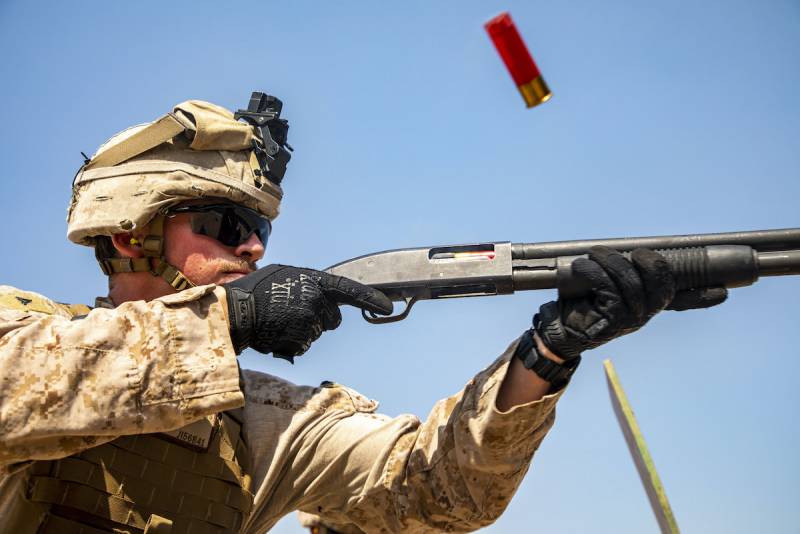 A Marine firing a Mossberg 590A1 gun

Since 2018, the United States Marine Corps, in collaboration with several scientific and commercial organizations, has been developing a promising non-lethal electroshock ammunition. In the future, on the basis of new technologies, it is proposed to make a whole family of cartridges and rounds compatible with modern infantry weapons.

KMP has mastered electroshock for a long time weapon (ESHO) from Taser / Axon, which has become a successful addition to firearms. However, the characteristics of such products are insufficient for solving a number of problems. First of all, there was a small radius of action, limited by the length of the wires. In this regard, in the summer of 2018, the KMP launched a new program for the development of a promising ESW.

The goal of the new program was to search for the necessary technologies with the subsequent creation of a full-fledged ammunition based on them. It was necessary to work out the possibility of adapting such technologies for use in 9- and 40-mm ammunition for pistols and grenade launchers, as well as in the 12th smooth-bore caliber. Bullets with electrical components must be compatible with standard ILC weapons.

A ready-made cartridge with an ESHO bullet should provide effective firing at ranges up to 100 m. Its electrical equipment should use the principle of Human Electro-Muscular Incapacitation (HEMI), which provides for the supply of electrical impulses of a special configuration that "drown" the natural signals of the human nervous system. The paralyzing effect of the shot must last for at least 30 seconds; desired duration - up to 3 minutes. With all this, the cost of one cartridge should not have exceeded $ 1.

The program is divided into three phases. The first phase involves the development of preliminary designs. During the second, it is planned to manufacture and test new ammunition. The third goal is the final refinement of the most successful samples for the purpose of subsequent introduction in the troops.

First on the range

At the end of June 2020, new messages appeared in the American media about the current state of affairs in the ESO project. As it turned out, one of the program participants, Harkind Dynamics, not only created the project, but also brought his ESHO cartridge for testing. This is a special bullet for 12 gauge shotguns. 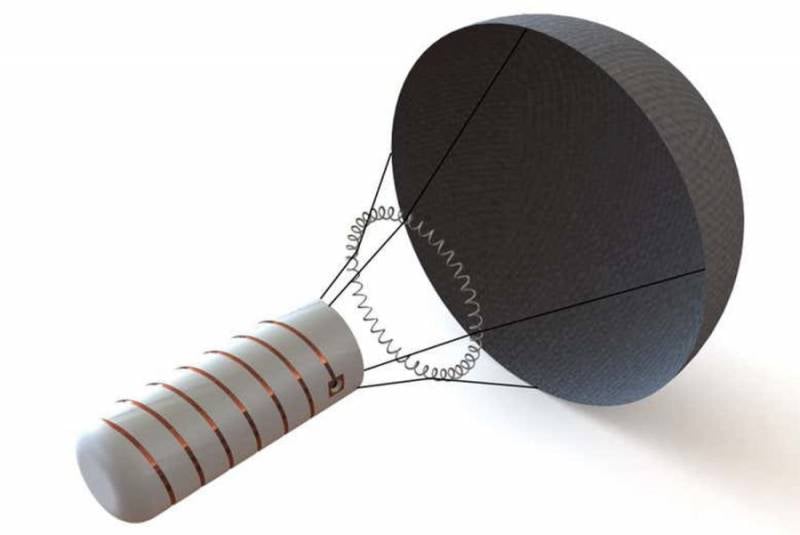 Published image of the SPECTER product. The bullet is depicted with the parachute released, but before the electrodes are fired.
Bullet SPECTER (Small Arms Pulsed Electronic Tetanization at Extended Range) represents a product of standard dimensions with an unusual design. It has a soft cylindrical body that crumples when hitting a target to cushion the impact. The necessary electrical equipment is placed inside the body, and in the rear there is a throw-out brake parachute.

Details of a technical nature were not disclosed. The ILC and the developer have not yet specified exactly how the promising bullet is built, how the timely release of the parachute and darts is carried out, how it was possible to combine the limited dimensions and the desired electrical characteristics, etc. However, it is known that the new bullet from Harkind Dynamics is capable of hitting targets at ranges of 100 m.

The SPECTER product is used in conjunction with a standard rifle case and can be used with any weapon of the appropriate caliber. Thus, the ammunition of a fighter with a shotgun can include both bullet or grape-shot, and non-lethal cartridges.

The developer and the customer clarify that the SPECTER bullet does not pose a threat to humans. By braking and crushing the body, he does not receive noticeable injuries, and the configuration of the electrical impulses is determined taking into account the reduction of side effects without compromising the main function. 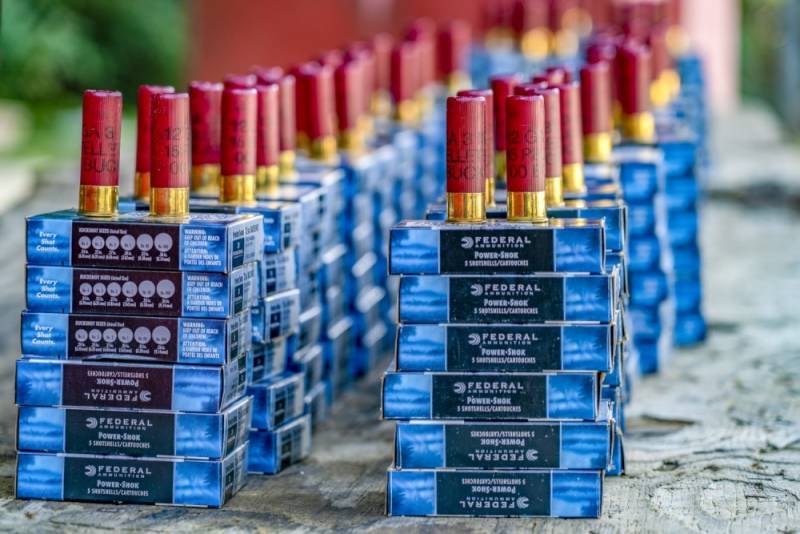 12 gauge standard ammo
How the SPECTER product is tested, what results have already been obtained and what needs to be corrected is not specified. The issue of compliance with the terms of reference has not been disclosed either. Currently, the ILC program is at the second stage, and this may indicate the need for various modifications and further improvement of the ESHO bullet.

Not the first of its kind

It should be noted that SPECTER is not the first development of its class. The previous sample of this kind could not advance beyond testing and market promotion. This negative experience helps refine the projections for the Harkind Dynamics project.

In 2008, Taser introduced the X12 complex, which included a Mossberg 500 shotgun with a number of modifications. A rifled barrel was used to stabilize the bullet, and the bolt was redesigned to make it impossible to use live ammunition. For the X12, a special ESHO-ammunition XREP was offered. A shock "pistol" was attached to the forend of the gun, if necessary. With the help of the X12, it was possible to hit targets at ranges of approx. 30 m, the XREP bullet provided impact for 20 seconds.

In terms of technical characteristics, the Taser X12 complex was quite successful and could effectively solve its problems. However, the project was ruined by the excessive cost. A single XREP cartridge cost $ 125 and was several times more expensive than a replacement cartridge for the X26 and similar systems. Therefore, the police departments and the military did not purchase the X12.

The SPECTER bullet has not yet passed the full cycle of testing and development - this will take some time. However, it is already clear what benefits the ILC can get with such a product. In addition, differences from the previous unsuccessful project are visible. Apparently, the new bullet is quite capable of finding a place in the arsenals of the ILC.

For SPECTER, the ability to fire and engage targets at ranges of at least 100 m is declared. This means that in a number of situations, combat and non-lethal weapons can be used together, in parallel and at the same distances. This will increase the flexibility of using the existing weapons and equipment. This cannot be achieved with the use of existing "Tasers" - their firing range does not exceed 8-10 m. 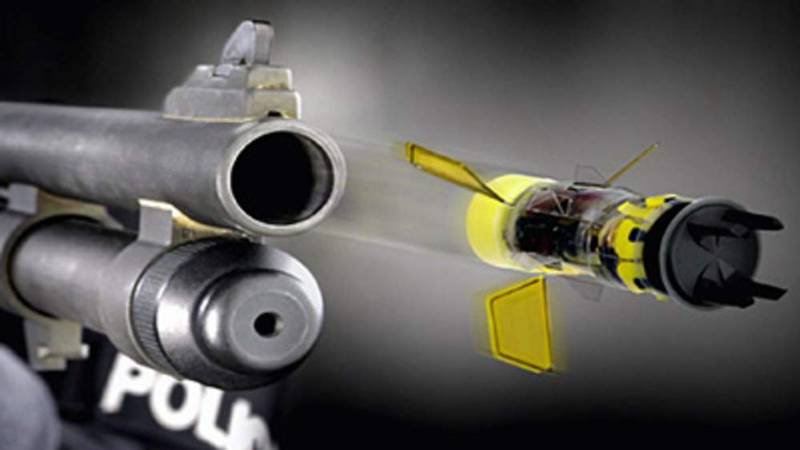 Promotional image of the Taser X12 system with the XREP bullet
In theory, new technologies make it possible to create electroshock bullets in the standard sizes of different cartridges. The terms of reference from the ILC for the current program, in addition to the 12 gauge, provides for the development of a 9-mm bullet and a 40-mm grenade. Thus, several main classes of infantry weapons are covered, which again leads to greater flexibility of use.

The requirement for the compatibility of the ESHO cartridge with military weapons is controversial. In this case, it is possible not to introduce separate weapons into the equipment for the use of non-lethal ammunition and use them in military weapons. However, the experience of US police structures shows that non-lethal cartridges should be used with separate weapons - in order to avoid various incidents.

The program for the development of ESH-ammunition for the US ILC was opened about two years ago. Since then, the program has progressed far enough - experimental bullets of a new type are tested in the conditions of the proving ground and demonstrate their capabilities. At the same time, so far only the SPECTER product from Harkind Dynamics has come down to testing. Whether there are other developments of this kind is not specified.

The proposed SPECTER project at least partially meets the customer's requirements. The electroshock bullet is made in the required dimensions and shows the desired range indicators. At the same time, other "combat" characteristics remain unknown. In addition, the price of the finished ammunition has not been announced - this parameter can be determined only after finishing the refinement.

It is not yet possible to say with certainty how successful this process will be. The developer is faced with quite complex tasks, but their implementation is quite realistic, as evidenced by the experience of other projects. If successful, the ILC will be able to get a fundamentally new non-lethal weapon and new capabilities. And a different development of events will not lead to serious problems - all the necessary means are in service and so.