Who will the Central Bank save: us or who is it needed? 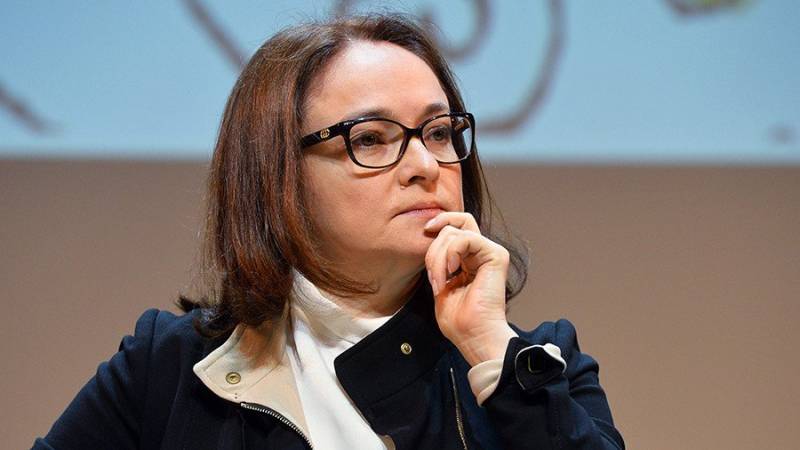 Thank you for everything

The popular German newspaper Die Welt has recognized the head of the Russian Central Bank, Elvira Nabiullina, as the main savior of the Russian economy. Thank you, of course, this is the only way I want to remind that the general public in our country will definitely not get warmer from this. Well, our general public is not very fond of those who are praised in the West.

In the West, as you know, they simply adore Mikhail Gorbachev, and in Germany - especially. This is understandable: the Union collapsed, and helped Germany to unite. They also love the notorious Russian privatizer Chubais, whose actions helped the West settle in key sectors of our economy so that now you cannot smoke it out by any means.

Once abroad, they sang praises to Mikhail Kasyanov, who, in the posts of finance minister and prime minister, seemed to have effectively "thrown off" all Russian state debts. Only now they do not remember that in the end literally all the leading domestic corporations and banks ended up in debt as in silks.

A little later, Alexei Kudrin was recognized as the best finance minister. Apparently, for the fact that he thoroughly replenished the bins of the notorious American funds, which successfully burst at the turn of 2008 and 2009. That did not prevent the ex-minister, left out of business, to actively promote for raising the retirement age and increasing the volume of foreign loans. Was it not for this that it was decided to send Kudrin straight to the Accounts Chamber?

Foreign colleagues and the media loved Nabiullina not so long ago: in 2015, Euromoney magazine named the chairman of the Bank of Russia the best head of the Central Bank for maintaining macroeconomic stability. A year later, a British business publication named her "the best head of the Central Bank" in Europe. In addition, Nabiullina managed to get into the list of the most influential women in the world - according to the authoritative Forbes.

Just a couple of years ago, not just anywhere, but in the Wall Street Journal, Elvira Nabiullina was already called exactly the same as now: the “savior” of the economy (How Nabiullina becomes "the savior of the Russian economy").

For what? Yes, all for the same. That cleared out the banking sector from everyone who cannot afford and cannot afford the tough regulations of the Central Bank. From everyone who dabbled in "poisoned" loans or simply got hooked on the currency exchange needle. And at the same time from all the recalcitrant and too independent, for which the chairman of the Central Bank reduced the capable, but recalcitrant Association of Russian Banks to the position of a provincial club of interests.

Let us recall that practically all the largest commercial banks with a significant share of the state left at the same time. The task of eradicating all kinds of banking opposition was accomplished simply brilliantly. However, the praises of the chief banker of Russia were also addressed for the fact that she stabilized Russian finances.

But she did it practically "to zero" for the majority of the population, when the rates on loans remained three times higher than the interest on deposits. And this with consistently falling inflation and key bank rates. When really "cheap" money is available only to the elite, and the rest, according to the well-known principle of the mafia, only the law remains.

Our citizens are not very interested in the fact that Germany has now become almost our main economic ally because of Nord Stream 2. Not even a partner, but an ally who, probably, would even like to lift all anti-Russian sanctions altogether, but hands are short. 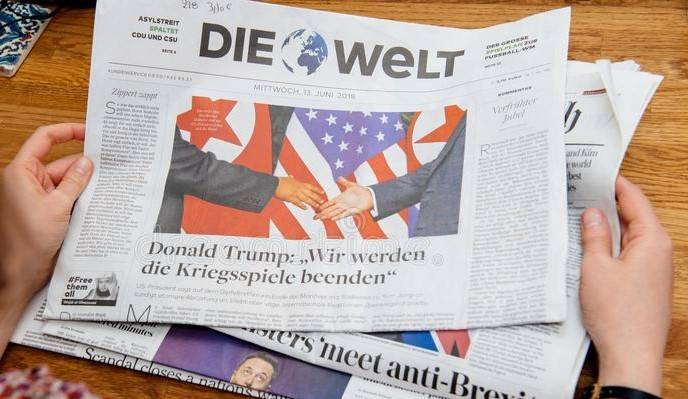 However, not only at the suggestion of the German edition, the head of the Central Bank is applauded in the Western business community. The best Elvira Nabiullina was also recognized by the experts of the World Bank, she was awarded numerous regalia at the IMF, but you never know where else ... As you can see, not only German colleagues have no doubts that the extremely tough monetary policy pursued by the Bank of Russia under the strict leadership of Elvira Sakhipzadovna, helped to alleviate our crisis economic problems.

If it were not for the Central Bank's firm course towards financial stabilization and if it were not for the categorical rejection of direct financial support for citizens and the business sector, the consequences of the coronavirus and the fall in oil prices could be much worse. However, in order to look objective, the authors of Die Welt still called the government's support measures insufficient.

Oddly enough, Die Welt considers it a mistake that the Russian Central Bank did not raise the key rate at the most acute moment of panic from the fall in world oil prices and the collapse of the ruble. But so far there is a persistent feeling that this was the only right decision. At the same time, the Central Bank and its head are given credit for maintaining macroeconomic stability. Maybe they just know better from the outside?

It is hardly worth taking Die Welt's maxims seriously about the fact that Mrs. Nabiullina has become almost the most influential woman in Russia, and that there are practically no women in leading leadership positions in our country. A number of surnames: Matvienko, Golikova, and even Popova, are unlikely to say much to the Western reader. And, in fact, the real power resource of all the rivals of the "iron lady" of the Central Bank does not look so impressive.

The German edition received a curious comment from the former deputy head of the Central Bank Sergei Aleksashenko: “Nabiullina is under pressure from all sides. She has become a very powerful figure in economic policy. " The hint of direct support from the first person is not very transparent, but in Russia it will be understood immediately.

Die Welt experts today associate their main hopes for saving the Russian economy with the actions of the Central Bank. At the same time, as if forgetting that the Bank of Russia did not raise the rate, they credit the regulator with the fact that it has reduced the key rate four times over the past five months.

It is very significant that Nabiullina was praised even for the duty and obligatory for members of the liberal economic community demand for some fundamental reforms of the Russian system of government. Moreover, this is exactly what she explains "limited opportunities for economic growth."

And yet she is the best

But who is the best for? For those who invest in Russia only for the sake of speculation and for those who consistently withdraw capital from the country? Of course, after all, the Central Bank has been consistently pursuing a policy of weakening foreign exchange controls throughout the years of E. Now on the agenda is a complete abolition of the mandatory repatriation of foreign exchange earnings. 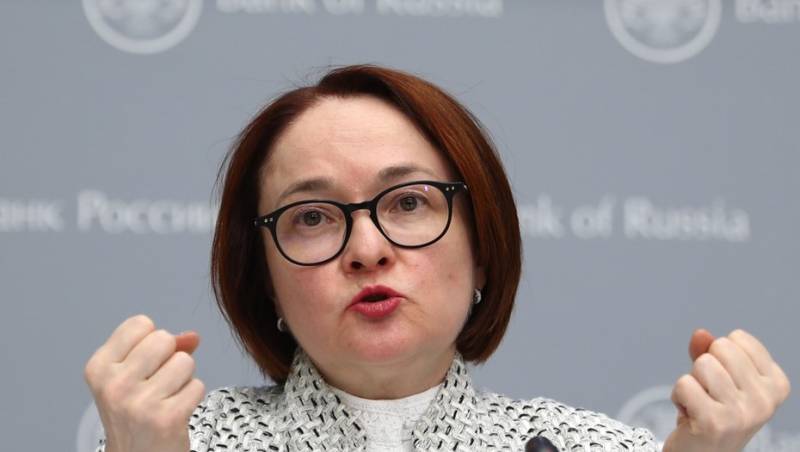 The operation to humiliate the banking community and turn the Association into a quiet get-together was carried out by the leadership of the Central Bank of the Russian Federation in parallel with another operation. We are talking about relegation to the position of an advisory office of the Deposit Insurance Association.

It should be reminded that the once advanced decision to create a unified insurance fund, which practically saved citizens' deposits from bankruptcies and collapses, was, in fact, disavowed with great difficulties. The bureaucracy that was tied to the hands of the DIA led to the fact that many who allowed themselves to have more than 700 thousand rubles on their deposits were simply deprived of them. The subsequent rollback did little to change, but only because the local default affected few.

It remains to be noted that the collapse of the ruble in the fall of 2014 was a good lesson for the best banker in the world and the Russian Central Bank did not repeat the mistake of that time in 2020. However, now the Central Bank seems to be making a different mistake, cutting the money supply to the limit, and this is not canceled by the key rate, which has been reduced almost to the level of inflation.

Due to this kind of "cleaning" of the financial field, financial support is again received only by a narrow circle of the elite, which in no way helps to warm up the economy. Even if, God forbid, to drop the ruble exchange rate at times. The American economy fell by a third, but we still have no idea how much ours fell.

And the Central Bank, headed by the "best banker in the world," with its games of betting, cleansing and free circulation of currency, seems to be saving the American economy. One thing we know for sure: now Russia has greatly reduced its exports. In this regard, export earnings have fallen sharply, and this also results in a reduction in the ruble supply, which is already minimal due to the position of the Central Bank.

As a result, the Russian budget, which is also almost a complete mystery to us now, may simply not have enough rubles to cover social obligations and pay wages. Even a colossal budget deficit, which has not happened for many years, cannot remove the problem. And here even the "savior" at the head of the Central Bank will not help.

Ctrl Enter
Noticed oshЫbku Highlight text and press. Ctrl + Enter
We are
Results of the week. “In our cooperative, the board is always agreed”Results of the week. "God forbid to see Russian revolt, senseless and merciless!"
124 comments
Information
Dear reader, to leave comments on the publication, you must to register.