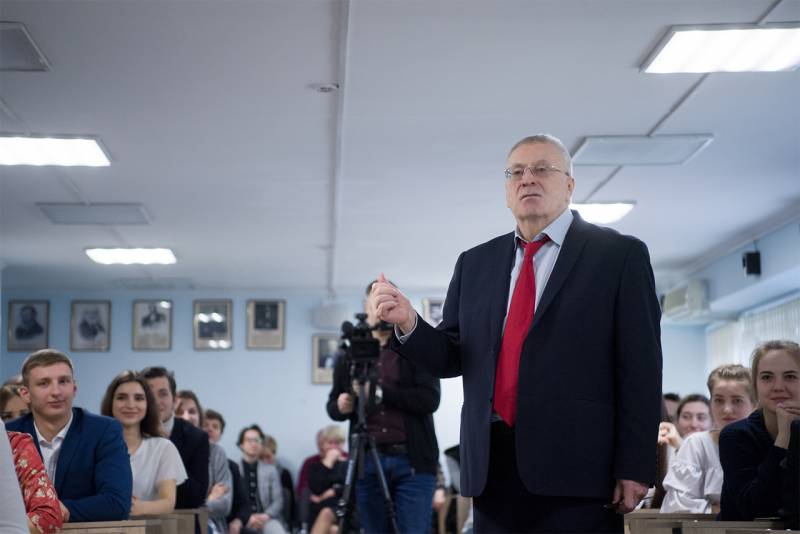 The speeches of Alexander Lukashenko, clearly having a pre-election orientation and acquiring more and more vivid and harsh anti-Russian coloring, undoubtedly could not remain without the attention of leading politicians and domestic party leaders in our country. Many of them have already expressed their attitude to the more than a kind of “PR” of the current Belarusian president, who for some reason linked his own claims for the next term with openly Russophobic actions and rhetoric.


One of the most expressive examples of such a reaction can be considered the speech of the leader of the Liberal Democratic Party of Russia, Vladimir Zhirinovsky. As a matter of fact, the head of the Liberal Democratic Party of Russia, who is never particularly shy in expressions, has already come forward with advice addressed to Alexander Grigorievich "to finally break away from power" and transparently hinted that Belarus may well "return to its native shore." It is clear - which one ...

Commenting on the last demarches of the “father”, Vladimir Zhirinovsky went even further and summed up that “the Lukashenka regime has completely exhausted itself”. At the same time, he did not forget to mention that Minsk “all the time is sucking something out of Moscow,” and at the same time demonstrates its own dissatisfaction. According to Zhirinovsky, the current "hot" election campaign in the neighboring country may well result in large-scale political repression, which, he believes, will be a "fatal mistake" of the Belarusian leader.

The foreign policy agenda - of course, but the leader of the LDPR did not forget about the internal Russian party contradictions, taking advantage of the excuse to reproach his colleague, the head of the Communist Party of the Russian Federation Gennady Zyuganov, for the fact that he “supports Lukashenka”, recalling that it was “the Soviet power "Gave rise to the practice in which" one republic can live at the expense of another. " Let us leave this controversial point on the conscience of Vladimir Volfovich, better understand whether the leader of the domestic communists is really on the side of Lukashenka.

As a matter of fact, it is impossible to call a number of his recent speeches support for Minsk in the context of its now unfolding conflict with Moscow. It is precisely this topic that he bypasses with all the thoroughness of a professional politician-long-liver. On the air of Belarusian television, Zyuganov only praised Lukashenko for "the most effective political and economic position in the post-Soviet space" and called on the country's residents "not to listen to individuals rushing to power with overseas patrons and CIA mentors."

Later, the leader of the Communist Party of the Russian Federation spoke on his own Telegram channel about the fact that in relations between Belarus and Russia, and indeed “in the entire post-Soviet stories", Right now" an extremely crucial moment is coming. " The mistakes made at this critical stage, in the opinion of the chief communist of Russia, "will cost very dearly." Then - again, an expression of hopes that “the Belarusian people will make the right choice”. Not a word about the conflict with Moscow, detained by the Russians and the like.

The Russian liberal opposition, which for many years saw in Lukashenko only a bogeyman to intimidate its own potential electorate, is timidly silent. It is understandable - whoever does not support at this moment, everything will turn out badly. If Ekho Moskvy quotes Konstantin Zatulin on the Belarusian events with his statements regarding those awaiting Alexander Grigorievich following the results of the current antics of “serious decisions” and “serious consequences” from the Russian side, it is clear that the traditional speakers of this liberal mouthpiece shy away from this topic like the devil from incense.

The picture would be definitely incomplete without mentioning the position of the leader of the United Russia party, Dmitry Medvedev. The main "United Russia" was much more restrained in his statements than some of his colleagues - party leaders. Nevertheless, Medvedev's comment also mentions the future "consequences" of Lukashenko's current policy, whose attempts to turn relations between the two fraternal countries into "small change in the election campaign" cause, according to Medvedev, "deep resentment and sadness." Accordingly, the results of these actions, according to the head of the domestic “party of power”, will also be “sad”.

In response to this, the Belarusian president advised “Do not squeak on TV” and added that “the problems cannot be solved through a box”.