Features of the Greek defense industry 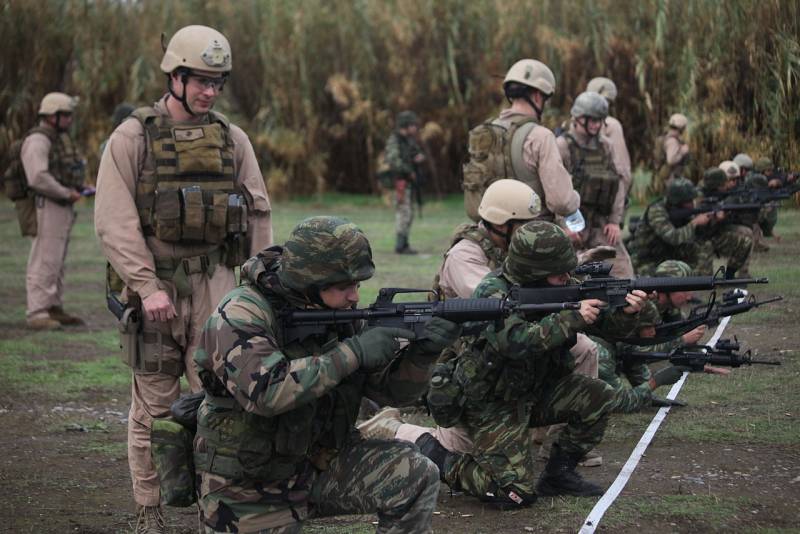 Joint training of the USMC and the Greek Airborne Forces

Greece has a fairly numerous and well-developed armed forces, including the ground forces, the air force and the navy. Also, the country has a developed defense industry operating in all major areas. However, the potential of such an industry is seriously limited, and its further development is extremely difficult, which is why it is necessary to rely on foreign partners for rearmament.

The total number of personnel of the armed forces of Greece is approx. 145 thousand people. More than 93 thousand are serving in the ground forces. There is a reserve of more than 220 thousand people. FY2020 Defense Budget reached 4,36 billion euros. In the current Global Firepower rating, Greece is ranked 33rd in the world and 13th in Europe.

The Greek army is armed with a variety of infantry weapons, armored vehicles and artillery of the main classes. The Air Force is based on tactical aviation, whose activity is provided by a number of auxiliary classes. The Navy has a fairly large submarine and surface forces. The largest ships are frigates of two types; the most numerous are missile boats. 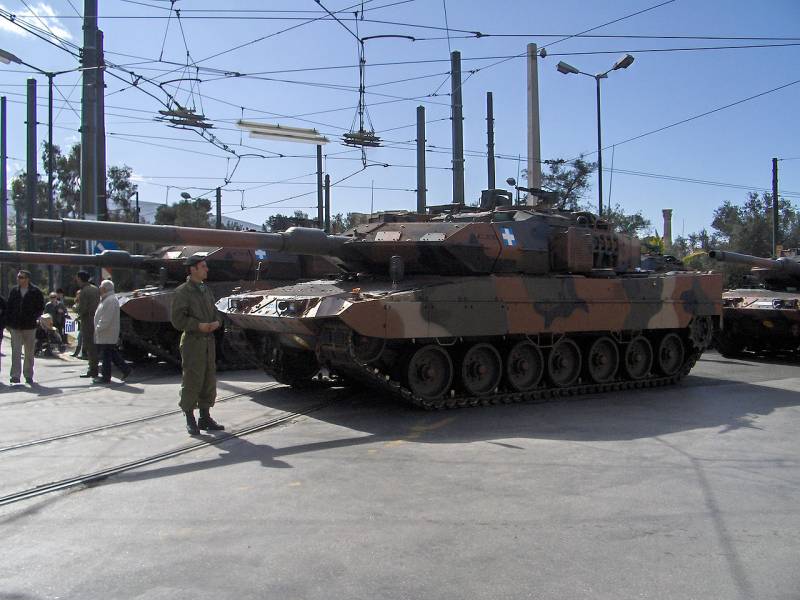 Ceremonial calculation tanks Leopard 2A6 HEL
The Greek defense industry includes about a hundred enterprises, both local and branches of foreign companies. All main directions are presented, from the production of small arms weapons and cartridges for devices and finished equipment. At the same time, Greek enterprises cannot independently produce all the required military products, which leads to the purchase of foreign products or to their joint production.

From the middle of the XX century. the bulk of weapons and equipment for the army were supplied from the United States, and later cooperation with other countries was established. Over time, the Greek industry has mastered the licensed assembly of weapons and equipment. Self-developed samples are few in number and generally do not affect the overall situation.

So, the infantry actively uses various automatic rifles, submachine guns and other samples of German design, produced under license by Ellinika Amyntika Systimata. Ready-made weapons of various types were purchased from the USA, Belgium, Great Britain, etc. Own design is not developed. In the field of infantry missile and anti-tank systems, the situation is the same. 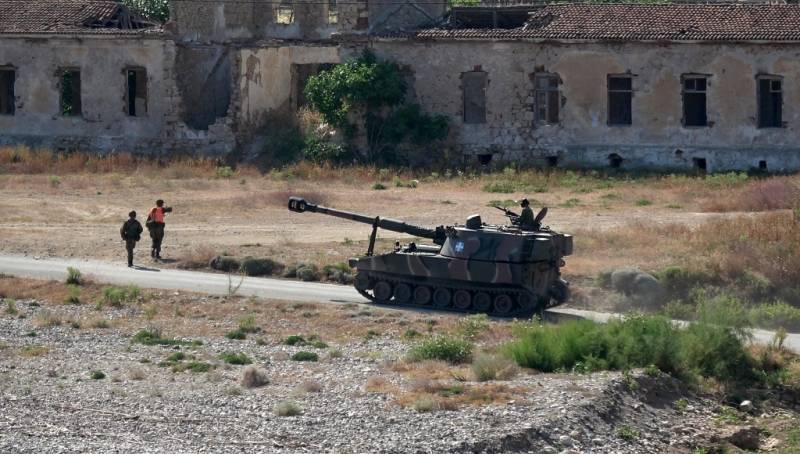 Self-propelled artillery exercises
The American-made M60 tanks, previously modernized by the forces of the Greek industry, remain in service. The basis of the armored forces are the newer Leopard 1 and Leopard 2 of various modifications. Of great interest is the Leopard 2A6 HEL MBT, modified to meet Greek requirements. The production of such tanks was carried out in the framework of cooperation between the German company KMW and the Greek company ELBO. A total of 170 units were built.

In the field of field artillery, our own production is represented by two mortars from EAS and a licensed copy of the Austrian system. Towed and self-propelled artillery - only foreign models. The situation is similar in the field of air defense, but it contains an interesting Greek development - the Artemis-30 anti-aircraft artillery mount. However, only 16 such products are in service.

Armored vehicles for infantry are mainly represented by American models - different versions of the M113 armored personnel carrier. However, in the eighties ELBO mastered the production of the Leonidas-2 armored personnel carrier - a modification of the Austrian Saurer 4K 4FA. In a similar way, the army was supplied with some samples of automotive equipment. Some of the cars were bought ready-made, others - in the form of machine kits for licensed assembly. 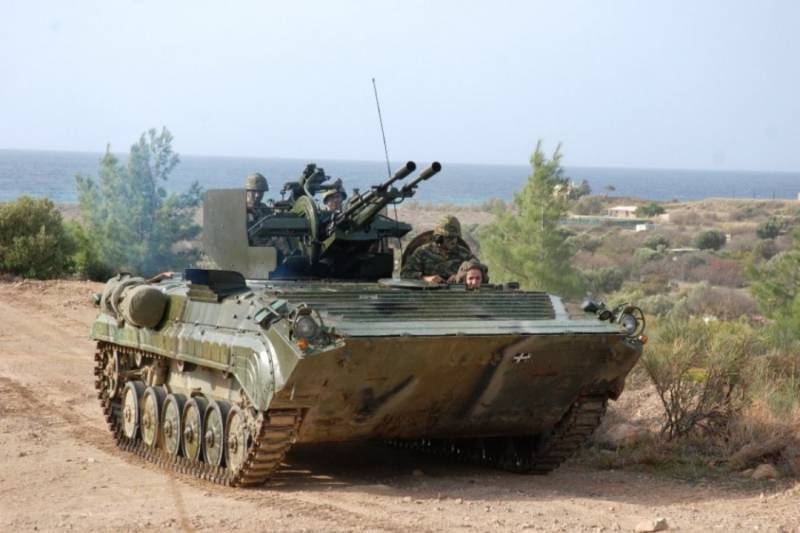 Anti-aircraft self-propelled gun BMP1A1-OST based on BMP-1
The army aviation operates attack and transport helicopters, light aircraft and several types of UAVs. However, all these samples were purchased abroad in finished form. The main suppliers were the USA and Italy.

A few products of our own design are limitedly exported. In addition, Greek enterprises are involved in various international projects and supply foreign partners with a wide range of components for the production of various weapons and equipment.

The backbone of the Greek Air Force is made up of American-made F-16C / D multipurpose fighters - about 150 units. There are also dozens of French Mirage IIIs and American F-4Es. Their combat work should be provided by Brazilian AWACS aircraft Embraer E-99, electronic warfare aircraft based on the C-130, etc. There are more than a dozen transport aircraft and helicopters of various classes, as well as a large number of training vehicles. 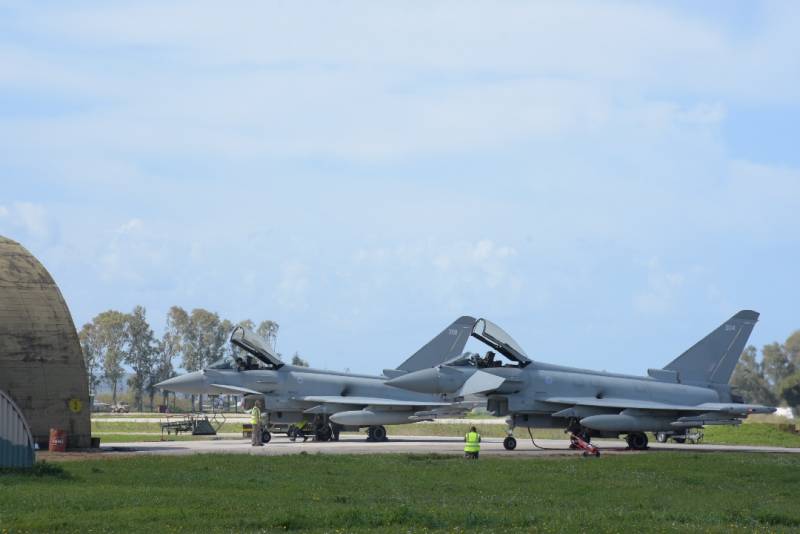 F-16C fighters of the Greek Air Force
Almost all aviation equipment of the Air Force is of foreign origin, with the exception of the Pegasus UAV from Hellenic Aerospace Industry. The latter is the leading Greek company in the aviation industry. HAI does not manufacture any aircraft, but is actively working to modernize the existing fleet, both independently and together with foreign organizations. In addition, HAI makes components for foreign assembly equipment, and is also engaged in several promising international projects.

Such approaches will continue for the foreseeable future. The Air Force will continue to operate foreign equipment; purchase of new foreign samples is possible. The role of their own enterprises will be limited to the repair and modernization of the material part. There are no plans to create our own aircraft.

Greece has a fairly developed shipbuilding, but construction fleet also does not do without foreign assistance. So, the submarine forces of the Navy include 11 non-nuclear submarines of German projects "209" and "214". Some of the submarines were built by Germany, others in Greece at Hellenic Shipyards SA - with the direct assistance of the German side. 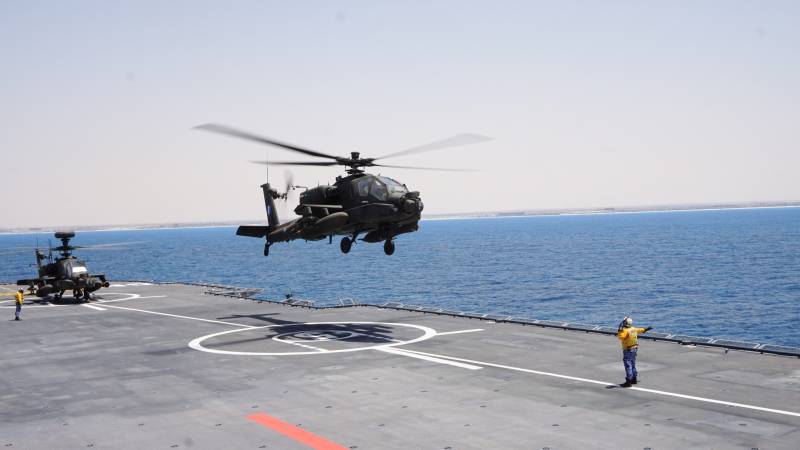 Attack helicopter AH-64D
The construction of four Hydra-class frigates (modification of the German MEKO 200) was carried out in a similar way. In the nineties and two thousand years, the Netherlands sold 10 Kortenaer-class PLO frigates to Greece, later renamed to the Elli class. Later, the Greek industry carried out the modernization of these ships.

There is a fairly large fleet of missile boats - approx. 20 units Basically, these are boats of the types of French design of the La Combattante series projects, renamed Votsis, Kavaloudis and Laskos. Three boats were bought from France, nine more were built in Greece under license. Since 2005, the construction of boats of the Roussen type according to the British project has been carried out. In July 2020, the Elefsis Shipyard delivered the last seventh boat.

The landing forces of the Greek Navy are of great interest. They include five large amphibious assault ships of the Yason class of our own construction and four Soviet ships of the project 1232.2 Zubr, purchased from Russia and Ukraine. 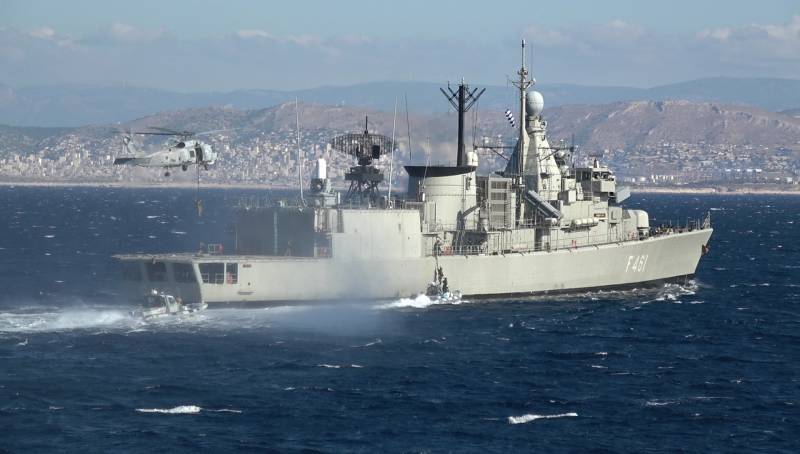 Frigate HS Navarinon F461 Dutch built
The Navy has a significant number of artillery and patrol boats. There are transport ships, tankers, boats for various purposes, etc. The construction of medium-sized warships and boats and support vessels was mainly carried out independently.

Despite the limited potential in terms of building new combat and auxiliary units, the Greek industry independently carries out maintenance and modernization of existing ships. Measures are being taken to increase the potential of industry, incl. providing for cooperation with third countries.

By yourself and with the help

In general, the Greek defense industry is capable of independently producing some military products required by the armed forces. At the same time, in a significant part of the regions, one has to rely on foreign assistance or direct deliveries of finished products. 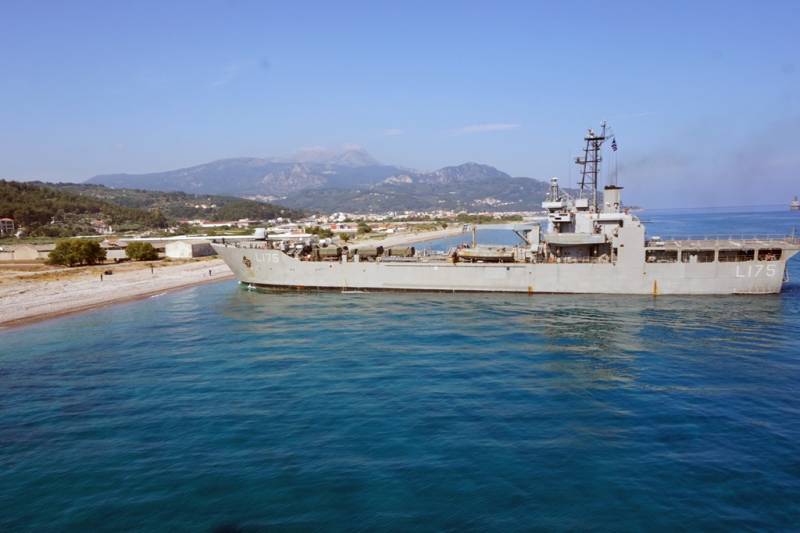 Large landing craft HS Ikaria L175 of "Jason" type, Greek construction
Despite such restrictions, Greece manages to independently provide for the operation and maintenance of cash material. In addition, there are export supplies and participation in international projects. This shows that in the developed areas, the Greek industry has a fairly high potential, which is of interest not only for the domestic customer.

There are no prerequisites for changing the current situation. For the development of new directions, such as the independent development of armored or aviation equipment, significant financial investments and other rather complex measures are required. In recent years, Greece has been facing economic problems, which virtually excludes the possibility of a radical modernization of industry and the expansion of its spheres of activity. However, participation in promising international projects contributes to the accumulation of experience that can be used in the future.

Thus, with the help of its own defense industry and with the assistance of foreign countries, Greece was able to build a sufficiently modern, large and effective armed force that is not inferior to other armies in the region and generally meets the needs of the country. At the same time, according to a number of parameters, the Greek army lags behind other armed forces. To overcome this lag, it is necessary to develop our industry and expand its ties with foreign colleagues - but the current situation does not facilitate the acceleration of such processes.

Ctrl Enter
Noticed oshЫbku Highlight text and press. Ctrl + Enter
We are
World MIC - who is in the topProjection of force
Military Reviewin Yandex News
Military Reviewin Google News
20 comments
Information
Dear reader, to leave comments on the publication, you must sign in.