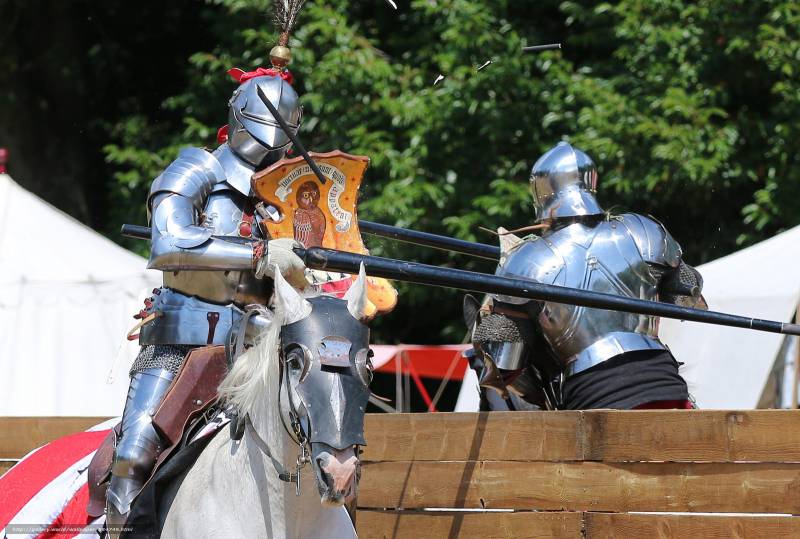 Nowadays, the image of the knight is romanticized and built on myths. This is largely due to the influence of modern culture on a person. Despite the fact that the heyday of chivalry in Europe fell on the XII-XIII centuries, interest in that era and warriors in armor still exists today. Numerous TV series, feature films, books and computer games that are released every year are living evidence. That is why, in the minds of many people, knights were imprinted in the images of wandering warriors who went in search of treasures, new lands, rescued beautiful maidens from castles and fought, if not with dragons, then with robbers and villains.

Why we romanticize chivalry

Reality, as you know, is much more prosaic than the canons that were set in literature at the beginning of the XNUMXth century, when interest in the Middle Ages arose in Europe. The adventure novel "Ivanhoe" by the Scottish writer Walter Scott became one of the striking examples of neo-Gothic Revival. Another Scottish writer, Robert Louis Stevenson, already at the end of the XNUMXth century romanticized the war of the Scarlet and White Rose in his work "Black Arrow". All of these works have become classics of adventure literature and striking examples historical prose, which remain popular in the XNUMXst century. The ideas of many people about chivalry grew precisely from the books of these famous and popular authors throughout the world.

However, many believe that today chivalry is dead. In fact, rather the opposite is true. Those rudiments of humanism, morality and a code of honor, which they tried to invest in chivalry back in the Middle Ages, gave their shoots much later. Many researchers believe that chivalry really played a role in the formation of modern noble values ​​and our ideas about them. And in this aspect, the knights turned out to be useful for society, although the peasants of medieval Europe could reasonably argue with this. 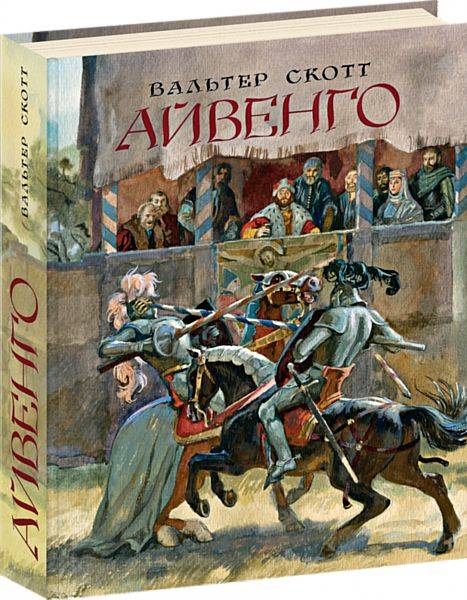 The very word "chivalry" today is often viewed as a code of honor and certain moral norms for the military class, which considered war as its main profession. In many conflicts that occurred after armor and helmets, swords and halberds disappeared from the battlefields, the military of different countries demonstrated examples of knightly behavior in our best sense of the word. However, do not forget that in the Middle Ages everything was different, and the knights themselves were primarily warriors, and not ordinary people. Very often they easily crossed the boundaries of norms and honor when the military situation required it. Often, civil strife and feudal wars left their mark on this. This was the other, bloody side of the knightly code, attempts to somehow influence which were made already in the Early Middle Ages.

The main victims of the knights were often the peasants

Chivalry began to form in the XNUMXth century on the territory of medieval France and Spain. Over time, it split into two large branches: religious and secular. The religious branch included knights who took a religious vow. Prominent examples are the famous Templars and Hospitallers, two knightly orders that actively fought against the Saracens (Arabs) and other representatives of non-Christian civilization. The secular branch of chivalry descended from professional warriors who were in royal service or served high-ranking nobility. If the representatives of the knightly orders were primarily dangerous for everyone who professed a faith different from them, then secular brotherhoods represented a danger for everyone who was not subordinate to their lord.

Yes, indeed, knights could bravely fight for their cities, castles, lords, show nobility and defend the honor of women. Spend your free time improving military skills, training with weapons and horse riding, participate in knightly tournaments. But in the Middle Ages, many rightly considered the knights themselves a threat to society. As petty nobles, they were invested with more power and wealth than the peasants. Given their good military training, armor and weapons, they often used peasants and poorest farmers to their advantage, attacked them, robbed, stole and killed livestock.

Fighting for their kings and lords, knights often faced not each other, but with ordinary peasants, who became their main victims. This is due to the period of feudal fragmentation, when all feudal lords could fight with each other. Regional conflicts arose regularly and could be very violent, while people of the same faith, language, and nationality killed each other with unprecedented frenzy. In those years, most of the clashes were associated not with the battles of some knights against others, but with raids, robbery and the destruction of peasant farms, lands and lands on which they worked. 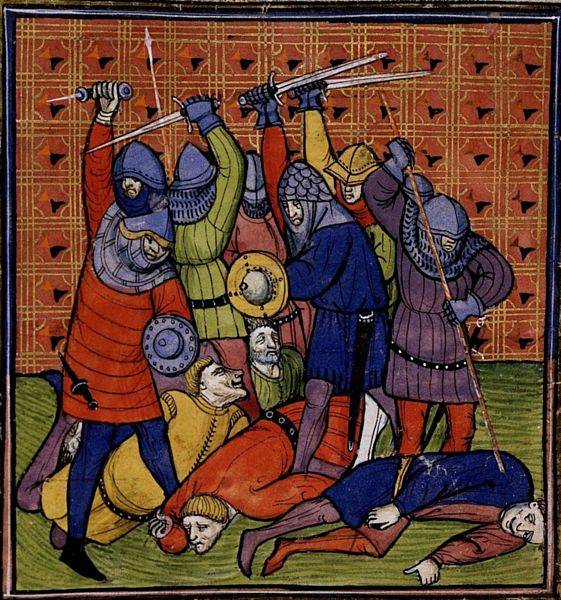 Peasants were powerless pawns in conflicts between large and small feudal lords. At the same time, the knights burned fields, buildings and estates that belonged to their rivals, and killed peasants. Sometimes they even robbed their own subjects, which was especially common in France during the Hundred Years War. Violence was common in those years. Count Valerand, stumbling upon peasants who were chopping wood without permission, captured them and cut off their legs, rendering them useless to work for their master. It is important to understand here that in those years the well-being of the nobility directly depended on the number and wealth of the peasants. That is why attacking peasant farms was the usual way knights punished their opponents, undermining their economic potential.

How the church tried to influence chivalry

In order to somehow limit the rigidity of the knights, the clergy of medieval Europe tried to create a "code of knights". Several such codes were created at different times. The Church was interested in not only making life more humane, but also protecting its own economic interests. Representing real power and strength in those years, the clergy wanted to provide protection to two of the three main classes: those who pray and those who work. The third estate of medieval Europe was those who fought, that is, the knights themselves.

Ironically, our lofty notions of knights and chivalry are largely based on codes of knighthood, which give them a good reputation, when in fact were created in order to stop their lawlessness and cruelty. An attempt to curb violence in medieval Europe was the Peace and Truce of God movement, which was led by the medieval church and later by civil authorities. The movement existed from the XNUMXth to the XNUMXth century, its main purpose was to protect priests, church property, pilgrims, merchants, women, as well as ordinary civilians from violence. For violators of the prohibitions, first of all, spiritual sanctions were provided. 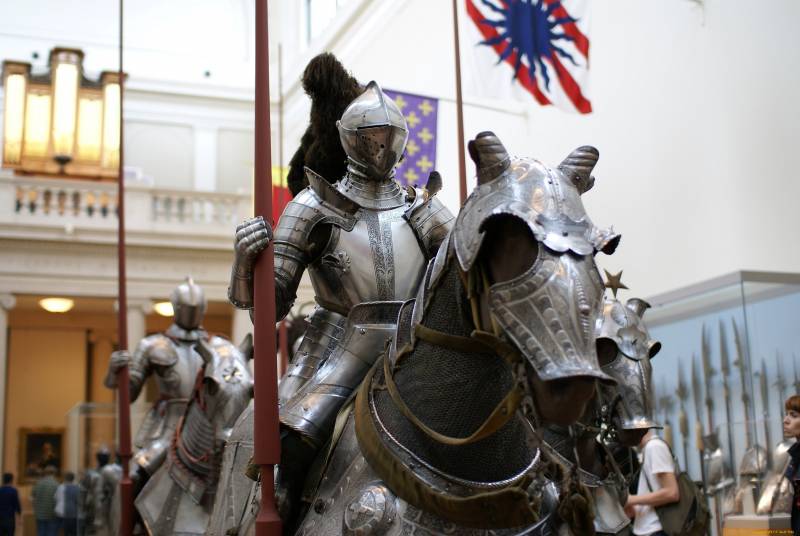 For example, in 1023, Bishop Warin of Beauvais offered an oath of seven main points for King Robert the Pious (Robert II, King of France) and his knights. A kind of code of knightly honor, which gives us an idea of ​​the rules that had to be adopted in response to frequent aggressive behavior on the part of representatives of chivalry.

1. Do not beat up random members of the clergy. The bishop urged the knights not to attack unarmed monks, pilgrims and their comrades if they do not commit crimes or this is not compensation for their crimes. At the same time, the bishop admitted retribution for the crime if the clergy did not make amends within 15 days after the warning issued by him.

2. Do not steal or kill farm animals for no reason. The ban affected all domestic animals: cows, sheep, pigs, goats, horses, mules and donkeys and was strictly in effect from March 2 to All Souls Day (November XNUMX). At the same time, the bishop admitted that the knight could kill domestic animals if he needed to feed himself or his people.

3. Do not attack, rob or kidnap random people. The Bishop of Beauvais insisted that the knights swear an oath against harsh treatment of men and women from villages, pilgrims and merchants. Robbery, beating, other physical violence, extortion, as well as kidnapping of ordinary people for the purpose of obtaining ransom for them were prohibited. The knights were also warned against robbery and theft from the poor people, even at the treacherous instigation of the local lord.

4. Do not burn or destroy houses for no good reason. The bishop made an exception to this rule. It was possible to burn and destroy houses if the knight found an enemy knight or thief in them.

6. Do not attack women if they do not give a reason. The prohibition ceased to apply if the knight learned that women were committing any atrocity against him. First of all, the ban extended to noble women, widows and nuns traveling without husbands.

7. Do not ambush unarmed knights from the moment of Lent until the end of Easter. This was one of the prohibitions common in medieval Europe, formally limiting hostilities at certain times of the year.