The victory over Japan was won not by the atomic bomb, but by the Red Army 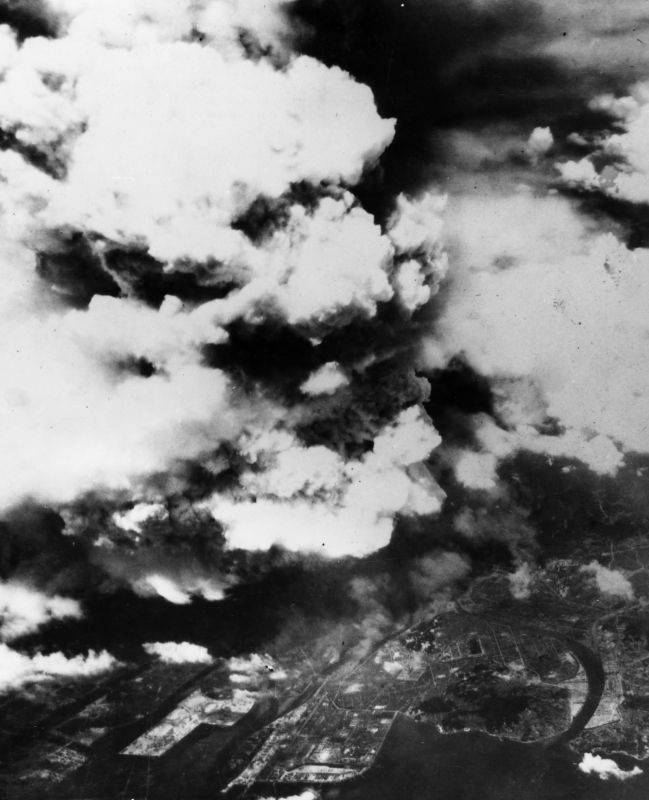 The myth of Russian aggression

Nowadays there are several major myths about the atomic bombing. According to Western researchers, the entry of the Soviet Army into the war in the Far East did not play any role in the surrender of the Japanese Empire. She would still have fallen to the blows of the United States. Moscow took part in the war with Japan in order to be among its victors and to snatch its piece in the division of spheres of influence in the Asia-Pacific region. Because of the desire to be in time for this section, Moscow even violated the Non-Aggression Pact concluded between Russia and Japan. That is, the USSR "treacherously attacked Japan."

The decisive factor that forced Japan to lay down weapon, was the use of nuclear weapons by the Americans. At the same time, they close their eyes to the fact that the Japanese government and military command, despite the use of atomic weapons by the United States, were not going to surrender. The Japanese military-political leadership concealed from the people the fact that the Americans were using a new terrible weapon and continued to prepare the country for battle until the "last Japanese". The question of the bombing of Hiroshima was not even brought up to a meeting of the Supreme Council for War Leadership. Washington's warning of August 7, 1945, about its readiness to unleash new atomic strikes on Japan, was perceived as enemy propaganda.

The "party of war" was actively preparing for the enemy invasion of the Japanese islands. Throughout the country, women, children and the elderly were being trained to fight the enemy. Hidden partisan bases were being prepared in the mountains and forests. The creator of the kamikaze suicide squads, deputy chief of the main naval headquarters, Takajiro Onishi, strongly opposed the surrender of the country, declared at a government meeting: "By sacrificing the lives of 20 million Japanese in special attacks, we will achieve an unconditional victory." The main slogan in the empire was "One hundred million will die as one!" It should be noted that the mass casualties among the civilian population did not bother the top Japanese leadership. And the threshold of psychological tolerance for losses among the people themselves was very high. Japan did not surrender by the spring of 1945, although as a result of massive carpet bombing of cities it lost from 500 to 900 thousand people. American aviation simply burned out Japanese cities built mostly of wood. And the fear of atomic weapons took root in society (mainly in the West) later, under the influence of propaganda about the "Russian threat".

Japan had a powerful grouping of ground forces in China, including Manchuria, in Korea. The troops on the mainland retained their combat capability; there was a second military-economic base of the empire here. Therefore, in case of failure in the battle for the Japanese Islands, it was planned to evacuate the imperial family, the top leadership and part of the troops to the mainland and continue the war. In China, Japanese troops could hide behind the Chinese population. That is, atomic strikes against China were impossible.

Thus, atomic strikes fell on cities where there were no large military factories and formations of the Japanese army. Japan's military-industrial potential was not affected by these strikes. These attacks also had no psychological or propaganda significance. The people were loyal to the emperor, the army and the military-political elite were ready to fight to the last Japanese (a similar situation was in the Third Reich). According to the "war party", it is better for the Japanese nation to die with honor, choosing death instead of shameful peace and occupation. 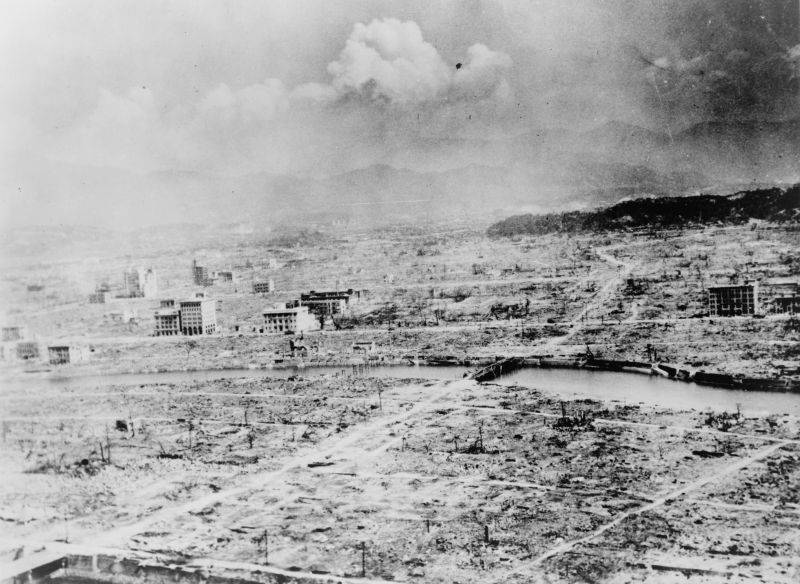 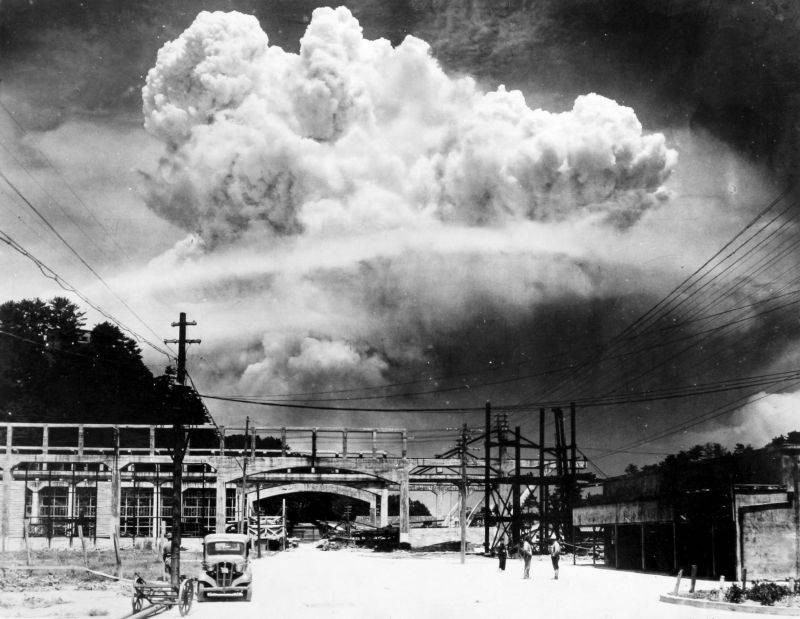 Of course, by the summer of 1945, the Empire of Japan was already doomed. Already in the summer of 1944, the situation had acquired the features of a systemic crisis. The United States and its allies had an overwhelming superiority in the Pacific Ocean and went directly to the Japanese shores (Okinawa). Germany fell, the United States and England could concentrate all their efforts on the Pacific Ocean. The Japanese fleet lost the bulk of its strike capabilities and could only defend limitedly the coast of the Japanese islands. The main personnel of the naval aviation was killed. American strategic aviation bombed the major cities of Japan with almost impunity. The country was cut off from a significant part of the previously occupied lands, deprived of sources of raw materials and food. The country could not protect the remaining communications of the metropolis and with the continent. There was no oil (fuel) for the troops and fleet... The civilian population was starving. The economy could no longer function normally, supply everything necessary for the army, navy and population. Human reserves were at the limit, and already in 1943 students were drafted into the armed forces. Japan could no longer end the war on acceptable terms. Her fall was a matter of time.

However, the struggle could continue for quite some time. The Americans managed to take Okinawa only in March 1945. The Americans planned to land on the island of Kyushu only for November 1945. The American command planned decisive operations for 1946-1947. At the same time, the possible losses in the battle for Japan were estimated quite high, up to a million people.

For the Japanese military and political leadership, the long, stubborn and bloody battle for Japan was the last chance to preserve the regime. It was hoped that Washington and London would not sacrifice hundreds of thousands of soldiers. And they will go to an agreement with Tokyo. As a result, Japan will be able to maintain its internal autonomy, albeit by abandoning all conquests on the mainland. There was a chance that the West would want to use Japan as an anti-Russian foothold (as before), and then some of the positions will be retained: the Kuriles, Sakhalin, Korea and Northeast China. It should be noted that in the conditions of the preparation of the United States and Britain for the third world war with the USSR ("cold war"), such options were quite possible. After all, the war with Japan worsened the military and political capabilities of the West, led by the United States, and Russia used this time to restore and strengthen its positions in the world.

And after the USSR entered the war and the complete defeat of the million-strong Kwantung Army in Manchuria, Japan lost all chances for a more or less favorable peace. Japan has lost a powerful grouping in Northeast China. Its positions were occupied by the Russians. The Japanese lost their sea communications with Korea and China. Our troops cut off the Japanese metropolis from the expeditionary forces in China and in the South Seas, communication with them was carried out through Korea and Manchuria. Only the troops in the metropolis remained under the control of the headquarters. Soviet troops occupied the territory that was the second economic base of the empire. Manchuria and Korea were the raw materials, resource and industrial bases of the empire. In particular, enterprises for the production of synthetic fuels were located in Manchuria. Combined with the energy dependence of the Japanese islands, it was a fatal blow to the military-industrial and energy base of the metropolis.

Japan also lost its "alternate airfield". Manchuria was seen as a place for the evacuation of the imperial family and headquarters. In addition, the entry into the war of the USSR and the rapid advance of the Russians into the depths of Manchuria deprived the Japanese military of the opportunity to use biological weapons against the United States and American troops that would have landed on the Japanese islands. Having received a nuclear strike, the Japanese prepared for a response: the use of weapons of mass destruction. We are talking about the "Unit 731", in which the Japanese military doctors under the command of General Shiro were engaged in the development of bacteriological weapons. The Japanese have made great strides in this area. The Japanese had advanced technology and a large number of ready-made ammunition. Their full-scale use at the front and in the United States itself (for the transfer of weapons of mass destruction there were large submarines - "submarine aircraft carriers") could lead to large losses. Only the rapid advance of Soviet troops to Pingfan County, where Detachment 731 was headquartered, ruined these plans. Most of the laboratories and documentation were destroyed. Most of the Japanese specialists committed suicide. Therefore, Japan was unable to use weapons of mass destruction.

Thus, the entry into the war of the USSR and the defeat of the Kwantung Army deprived Japan of its last chances to drag out the war and for peace without complete surrender. The Japanese empire was left without fuel, steel and rice. The united front of the allies destroyed the hope of playing on the contradictions between the USA and the USSR and concluding a separate peace. Russia's entry into the war in the Far East, which deprived the Japanese of their last means to continue the war, played a more important role than the use of atomic weapons by the United States. 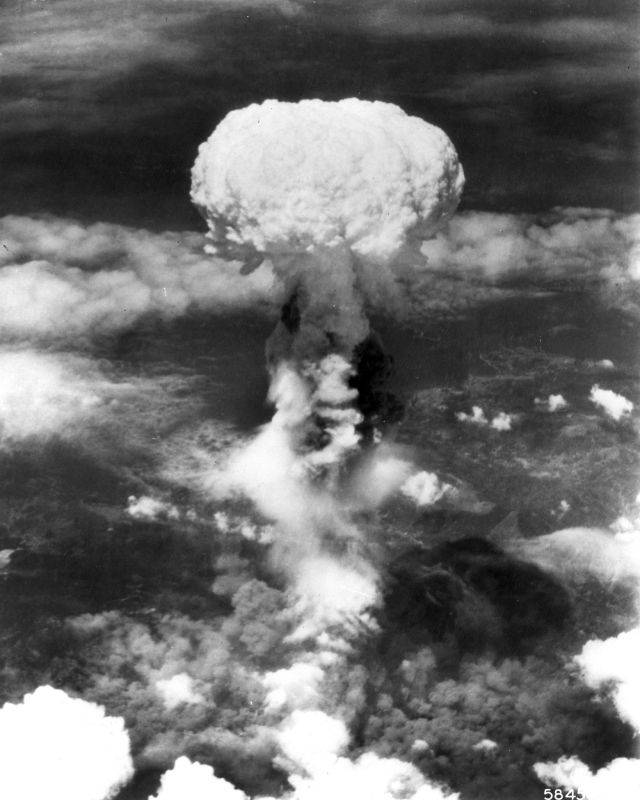 The atomic bomb "Fat Man" dropped from an American B-29 bomber exploded 300 meters above the Nagasaki Valley. "Atomic mushroom" explosion - a column of smoke, hot particles, dust and debris, rose to a height of 20 kilometers