Ways of development and modernization of RPG-7 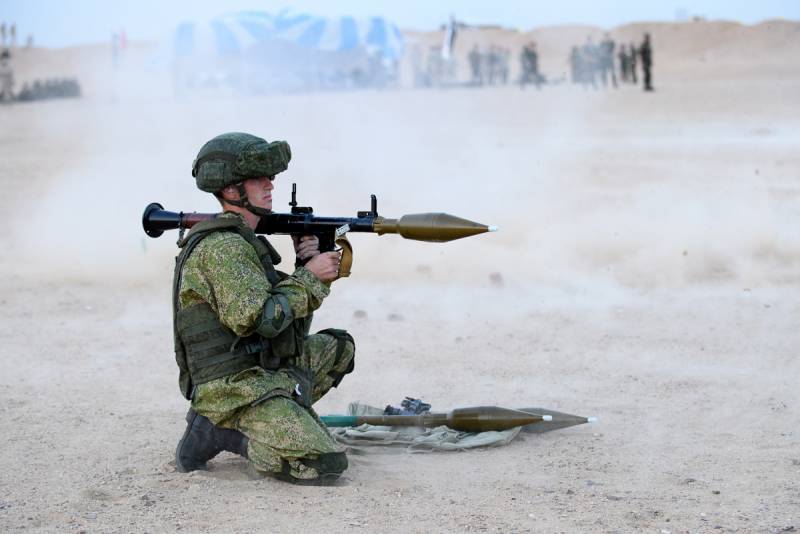 RPG-7 grenade launcher. A mechanical sight and a PG-7VL shot are used. Photo of the Ministry of Defense of the Russian Federation

In 1961, the RPG-7 anti-tank grenade launcher with the PG-7V cumulative round entered service with the Soviet Army. Later this system began to be developed and improved, due to which it still meets the basic requirements of the armies and retains its place in the troops. Such a long service was facilitated by the high modernization potential of the structure - by modifying or replacing individual elements, new opportunities could be obtained.

The main element of the RPG-7 anti-tank system is the grenade launcher itself - a recoilless launcher with guidance and fire control means. This product was originally distinguished by high design perfection and practically did not need any modifications. However, in the future it was altered several times for one purpose or another.

Airborne RPG-7D. Photo Wikimedia Commons
In 1963, the RPG-7D modification grenade launcher entered service with the Airborne Forces. Its differences were in the detachable design of the pipe-barrel and the presence of bipods. Otherwise, it was identical to the base RPG-7. Later, the modification "D" was improved, but without changing the design of the starting device.

Interesting options for modernizing the RPG-7 have appeared in recent decades abroad. For example, the American company Airtronic has been producing the RPG-2009 grenade launcher since 7 - a copy of the Soviet product with modified ergonomics. Plastic is widely used in the design, standard strips for additional devices are installed on the barrel. The shape of the handles has changed, and an adjustable butt has appeared.

One of the Airtronic USA grenade launchers. Photo Airtronic-usa.com
Later, the Mk 777 grenade launcher was presented - a lightweight version of the RPG-7. He received a composite barrel with a steel liner and fiberglass pipe. The composition of attachments has been reduced. Due to these measures, the own weight of the grenade launcher was reduced to 3,5 kg. Other options for the revision of the starting device were also proposed.

The main task of the development of the basic RPG-7 was to increase the combat characteristics, which resulted in the appearance of new shots. In the early years, the main direction of improving ammunition was to reduce the size and weight, while increasing armor penetration. In the future, fundamentally new combat units appeared. It is curious that in all cases a unified set of elements is used - the starting charge, the engine and the tail. 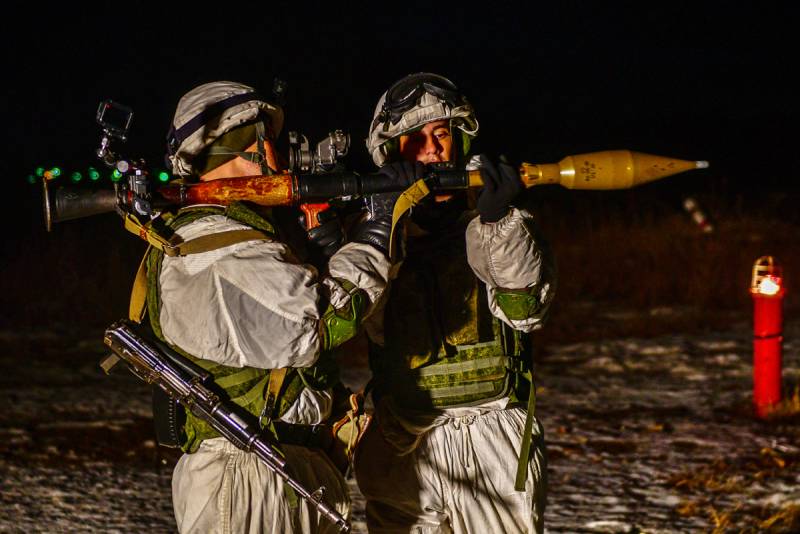 Night shooting with a day sight. Photo of the Ministry of Defense of the Russian Federation
85-mm over-caliber grenade PG-7V mod. 1961, with a mass of 2,2 kg, it penetrated 260 mm of armor. In the late sixties, the PG-7VM product was created with an improved shaped charge. With a mass of 2 kg and a caliber of 70 mm, it pierced 300 mm. The next representative of the family, PG-7VS, pierced 400 mm at the cost of a small increase in caliber. In the late seventies, a PG-7VL "Luch" shot with an enlarged 93-mm warhead was adopted - it penetrated 500 mm of armor.

The development of protective equipment for armored vehicles led to the appearance of a PG-7VR round with a tandem warhead. The grenade of increased length and weight of 4,6 kg carries a 64-mm lead and 105-mm main charges. Upon hitting the target, the leading charge provokes the activation of dynamic protection, after which the main charge penetrates up to 650 mm of armor. However, the growth of power was accompanied by a reduction in the aiming range. 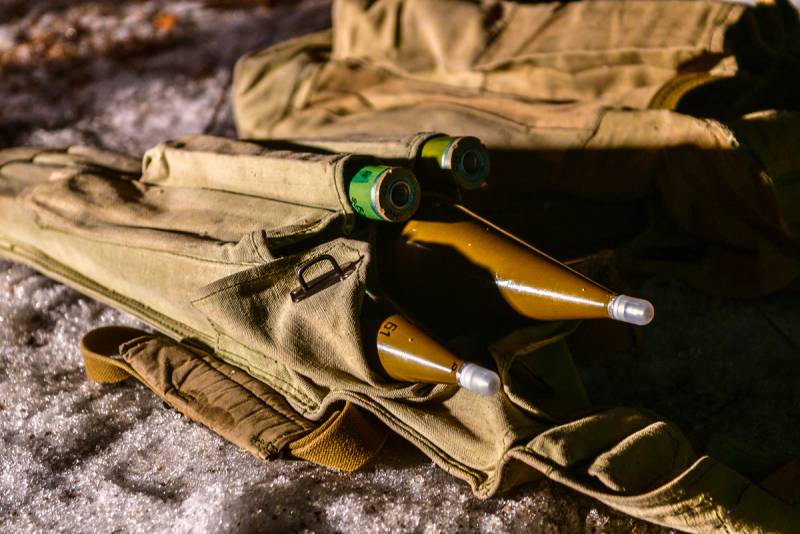 PG-7VL rounds. Photo of the Ministry of Defense of the Russian Federation
Also in the late eighties, a grenade was developed to destroy manpower, unprotected equipment and buildings - TBG-7V. It was equipped with a thermobaric warhead with a radius of destruction of 8-10 m. A few years later, an OG-7V shot with a fragmentation warhead, containing 400 g of explosive, appeared.

Foreign countries also tried to develop their own shots for the RPG-7. So, the already mentioned company Airtronic produces the SR-H1 cumulative grenade. The product with a caliber of 93 mm and a mass of 3,82 kg penetrates 500 mm of armor. Practical ammunition for training grenade launchers is also offered.

Another direction in the development of the RPG-7 was the consistent development of new sighting devices. First of all, it was associated with the appearance of improved ammunition with changed ballistics. However, some scopes were created to obtain new combat capabilities.

In the first modification, the RPG-7 was equipped with an integrated mechanical sight, which performs the functions of an auxiliary one, and an optical PGO-7. The latter was a sight with a magnification of 2,7x with markings for determining the range to the target and firing. 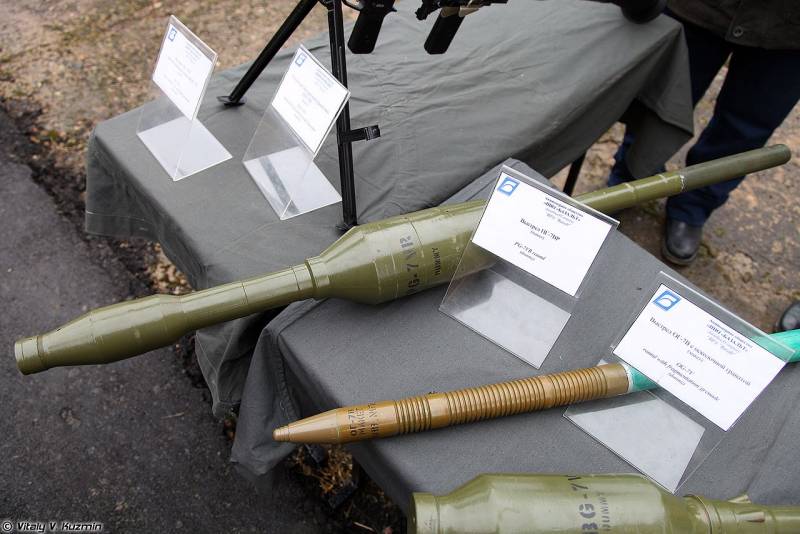 Shots for the grenade launcher: tandem cumulative PG-7VR, fragmentation OG-7V and thermobaric TBG-7V (at the edge of the frame). Photo Vitalykuzmin.net
Already in the early sixties, the PGO-7V sight was created - an improved version of the existing product. Some innovations were applied in it, which remained in all the following modifications. This design received further development only at the end of the eighties in connection with the emergence of new "heavy" rounds PG-7VR and TBG-7V. For them, the PGO-7V3 sight was intended with an appropriate sighting scale.

In the early seventies, the possibility of using a grenade launcher at night was provided. The RPG-7N / DN product was equipped with PGN-1 and NSPU (M) sights. They allowed fire on tanks from ranges up to 500-600 m. The scope scales were designed for the few existing shots. 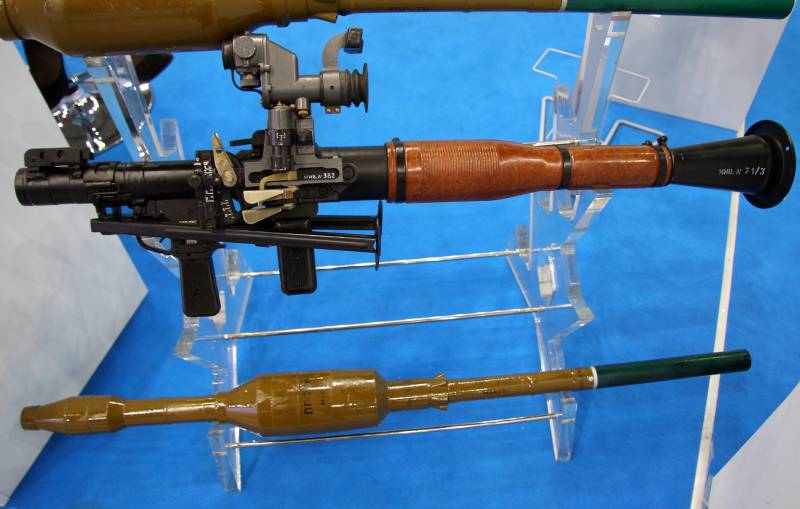 RPG-7VR grenade launcher with PGO-7V3 sight. Photo Vitalykuzmin.net
At the turn of the nineties and two thousand years, with the advent of new models of grenades, the so-called. universal sighting device UP-7V. With its help, the RPG-7 could effectively use fragmentation and thermobaric rounds at increased ranges. For TBG-7V, the firing range increased from 200 to 550 m, for OG-7V - from 350 to 700 m.

Foreign countries have repeatedly made attempts to independently improve the RPG-7 sighting devices. For example, in 2017, the Belarusian Center for Scientific Research and Design presented the Ovod-R grenade launcher. It was a regular grenade launcher with a PD-7 "smart" sight. The latter is an optoelectronic system with a day channel and a laser rangefinder (the night channel is provided with a separate attachment), as well as a set of weather sensors and a ballistic computer. It was argued that the PD-7 is capable of accurately calculating targeting data and provides more effective fire with all compatible shots. 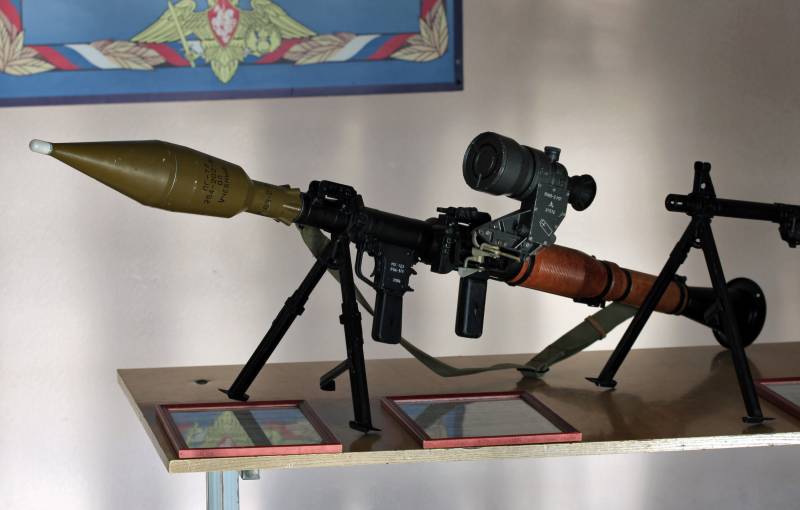 It is easy to see that the RPG-7 anti-tank rocket launcher and its ammunition in the first versions were not very complex in design. At the same time, they had a fairly high firepower and made it possible to effectively fight armored vehicles and thereby increase the combat effectiveness of the infantry. However, the development of armored combat vehicles gradually reduced the value of grenade launchers.

The relative simplicity of the design of the grenade launcher and its grenades made it possible to carry out modernization without any particular difficulties with obtaining various remarkable results. Serious reworking of the launcher did not make sense - only a collapsible landing grenade launcher was created in our country. The development of ammunition and sighting devices was much more active, and these two areas were directly related to each other. 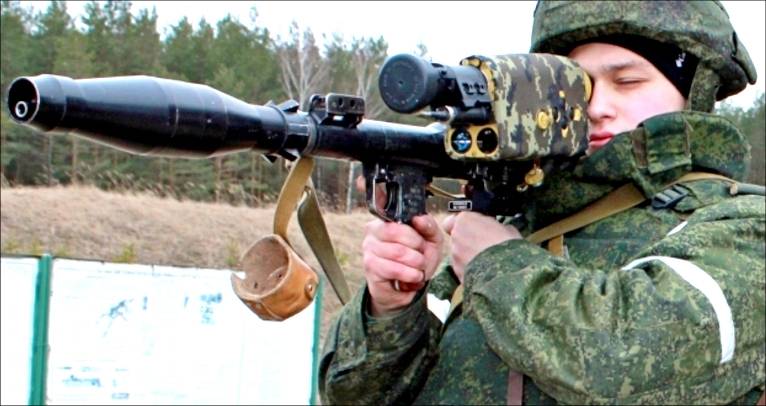 Belarusian "Gadfly-R" with a sight PD-7. Photo Naviny.by
Combining different versions of the launcher and sights, Soviet and Russian designers have created a dozen modifications of the base RPG-7 with one or another feature. The later versions of the grenade launcher are compatible with the full list of Russian rounds - and have broad combat capabilities. Improvement process weapons and pomegranates are also carried out abroad, which adds to the general list of products.

Simplicity, low cost, efficiency, as well as the possibility of quick and easy modernization with an increase in the main characteristics helped the RPG-7 grenade launcher of all major modifications to become widespread throughout the world. This weapon has been in use for almost 60 years and is unlikely to leave the scene in the near future. One of the reasons for this may be new modernization projects - using the groundwork and renewal methods formed and tested in the past.