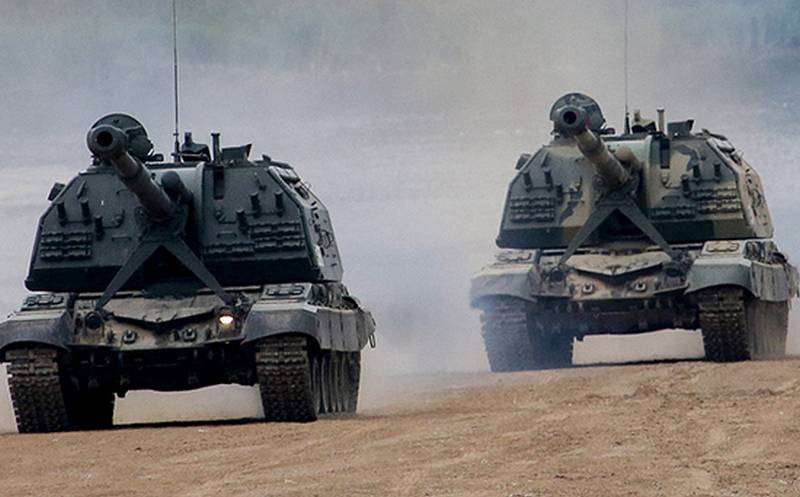 The Ministry of Defense has received a new batch of modernized 2S19M2 Msta-S self-propelled howitzers. Self-propelled guns have been modernized at the Uraltransmash enterprise as part of the 2019-2021 government contract. This was reported by the press service of Uralvagonzavod (UVZ).

Dmitry Semizorov, Director General of Uraltransmash JSC, reported to Russian Defense Minister Sergei Shoigu on the delivery of the latest modernization of self-propelled Msta-S howitzers to the Russian army. 152-mm self-propelled howitzer 2S19M2 is a combat tracked vehicle that meets all the requirements for modern artillery
- said in a statement.

As the press service explained, the advanced MSTA-S self-propelled guns have significant design differences from the previous modification of the artillery installation: they have a new automated fire control system that can significantly increase the rate of fire, there is the possibility of using digital electronic maps, which significantly speeds up orientation on the ground.

The 152-mm Msta-S howitzer entered service in 1989. Designed to destroy manpower, tactical nuclear weapons, artillery batteries, armored vehicles, anti-tank weapons and air defense weapons, as well as to destroy field fortifications and enemy command posts. Fire can be conducted on observed and unobserved targets from closed positions and direct fire. When firing, both shots from the ammunition rack and those supplied from the ground are used.

Ctrl Enter
Noticed oshЫbku Highlight text and press. Ctrl + Enter
We are
Uraltransmash reports on the transfer by the Ministry of Defense of modernized self-propelled howitzers 2С19М2December 2010 years. Russian March. Senseless and merciless? Notes not a Russian person
44 comments
Information
Dear reader, to leave comments on the publication, you must to register.