The first tanker of project 03182 is being tested 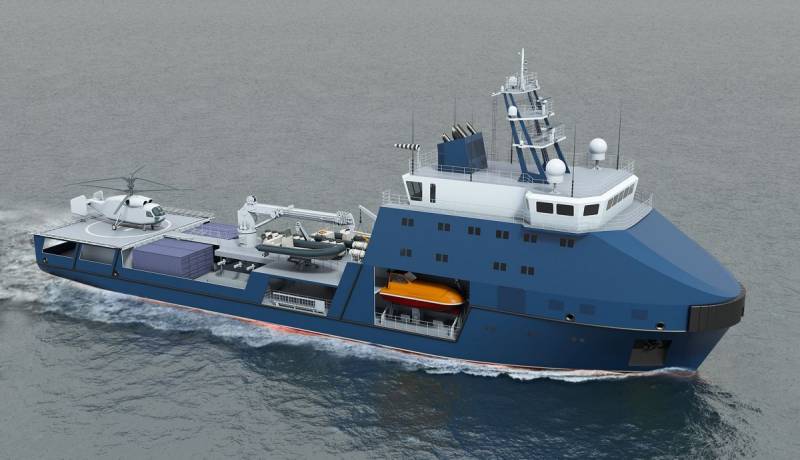 Already this year, the Black Sea Fleet may receive a new auxiliary vessel - the small sea tanker "Vice-Admiral Paromov", built on pr. 03182. A few days ago, the tanker left Nizhny Novgorod, where it was being built, and went to Sevastopol to undergo tests at the base of the KChF ... In the foreseeable future, the Russian fleet will receive three more such vessels, which are already under construction at two plants.

Project 03182 (number 23310 was originally used) with the code "Platform-Arctic" was developed by the Zelenodolsk Design Bureau. In 2014-15. The Ministry of Defense has ordered the construction of four such tankers for the Black Sea and Pacific fleets.

The contract for two ships was awarded to the Zelenodolsk Shipyard named after Gorky, two others were commissioned to build the Vostochnaya Verf plant (Vladivostok). Subsequently, for unknown reasons, the order for the Zelenodolsk plant was transferred to the Nizhny Novgorod enterprise "Volga". The delivery of the lead tanker was expected in 2017. Unfortunately, it was not possible to meet these deadlines.

The lead tanker of project 03182, Mikhail Barskov, was laid down on October 27, 2015 at Vostochnaya Verf. In February 2018, the second ship (the fourth in the total series), Boris Averkin, was laid down there. Both of these tankers are being built in the interests of KTOF. 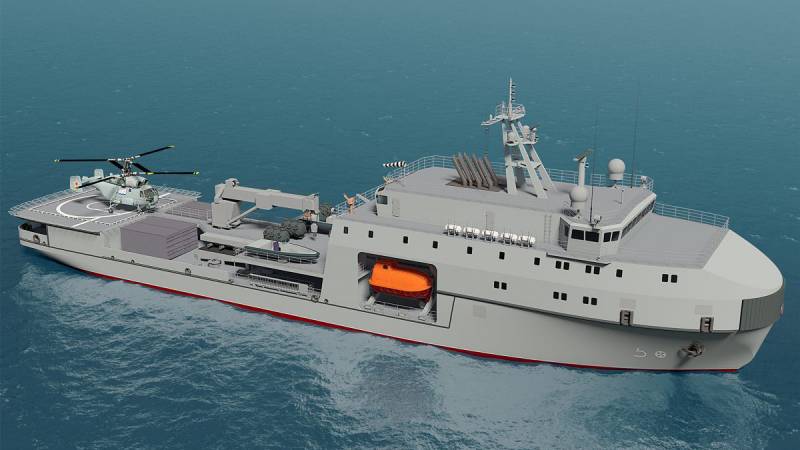 Construction on the Volga began on September 1, 2016. The first tanker for the plant and the second in the series was the Vice-Admiral Paromov tanker. In March 2017, the ship "Vasily Nikitin" was laid down there. Nizhny Novgorod builds tankers for the Black Sea fleet... After construction, they will have to move to the place of testing and future service - through the Volga, Don, Azov and Black seas.

The construction of Mikhail Barskov in Vladivostok ran into difficulties and was delayed. Because of this, “Vice-Admiral Paromov” was launched first - this happened in December 2018. The launch of the lead tanker took place only in August 2019. Two more vessels are at different stages of construction on the slipway. Their descent will take place in the foreseeable future; completion will take some time.

In the coming days, the first tanker, project 03182 for the KChF will reach Sevastopol, after which sea trials will begin. It is planned to spend several months on them, and in the absence of serious difficulties, the ship will be handed over at the end of the year. It is not known how soon the lead tanker will be tested.

Small sea tanker pr. 03182 is a multipurpose vessel capable of taking on board a variety of liquid and dry cargo, incl. bit. The tanker is capable of supplying other ships, transferring various cargoes to them, as well as receiving sewage and solid waste. It is possible to use the vessel as a rescue vessel in certain operations. The design provides for the ability to work in the arctic zone. 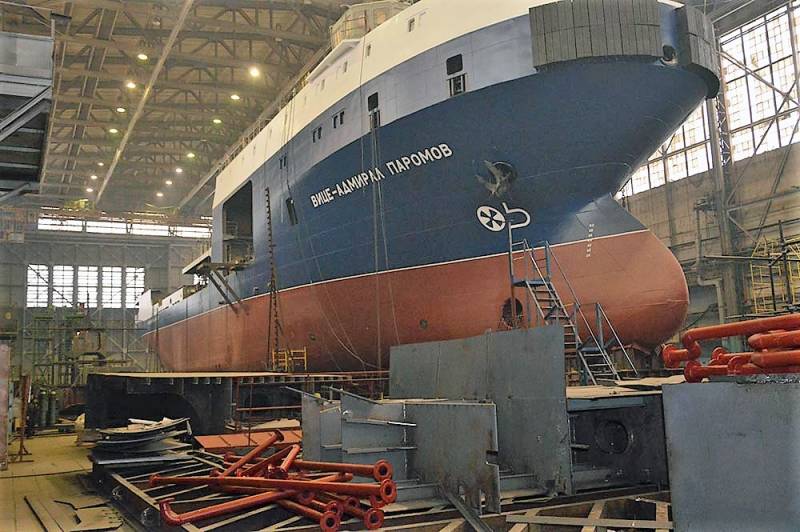 "Vice-Admiral Paromov" shortly before launching, December 2018
The tanker has a length of 75 m and a width of 15,4 m. Draft at full load - 5 m. Displacement - 3,5 thousand tons, deadweight - 1560 tons. The hull corresponds to the ice class Arc4 / L1, which allows independently to overcome first-year ice up to 0,6-0,8 m or follow the icebreaker through first-year ice up to 1 m thick. The vertical dimensions allow the use of inland waterways.

The tanker has a characteristic layout. The superstructure is located in the bow of the vessel; behind it there is a deck with places for stowage of cargo, crane and other equipment, etc. The feed was given for the helicopter pad. A significant part of the internal volume of the case accommodates containers for liquid cargo. According to the ZPKB, the vessel's deadweight includes 200 tons of naval fuel oil, 250 tons of diesel fuel, 420 tons of fresh water, 320 tons of its own stocks and other cargo.

The power plant is based on three 1600 kW diesel generators and two 400 kW diesel generators. In the stern, there are two foreign-made propellers with electric motors with a capacity of 2175 hp each. There is a bow thruster in the bow. Cruising range - 1500 nautical miles, autonomy - 30 days.

The tanker's crew includes 24 people. It is possible to accommodate another 20 people. - specialists of the required profile, anti-terror fighters, personnel aviation groups, etc. 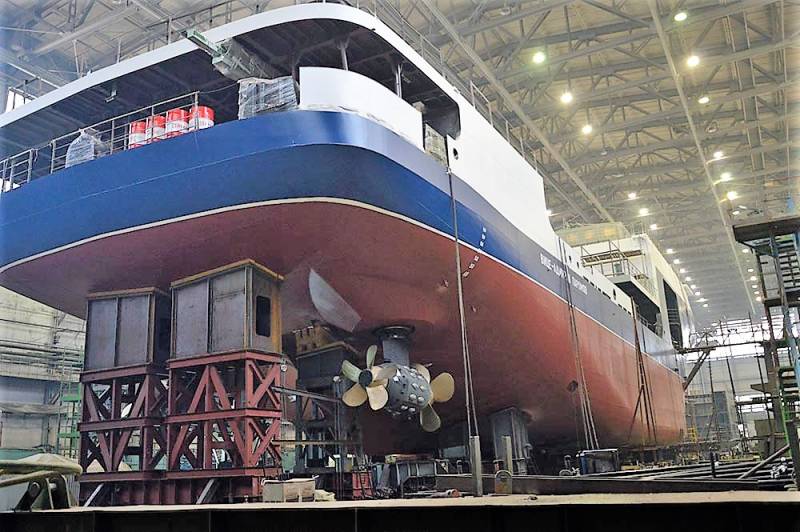 Four small sea tankers of project 03182 are intended for two fleets and are of great importance for maintaining their combat effectiveness. KTOF and KCHF have quite numerous groupings of support vessels of all main classes, but they are not distinguished by their novelty. In addition, the new tankers will provide both quantitative and qualitative advantages.

According to available data, there are only two small tankers built in the eighties in the ranks of the Pacific Fleet now, several more are under repair. In the recent past, the Black Sea Fleet was left without small tankers due to their moral and physical obsolescence. As a result, even four modern vessels of project 03182 are capable of changing the situation for the better.

Available ships, such as the 1844 Cairo tankers, are capable of carrying fuel oil, diesel fuel, oil or water, depending on the modification. The standard displacement of such a tanker is 1127 tons with a cargo weight of not more than 500 tons. The bulk of the deadweight is made up of liquids in several tanks; there is a hold for 5 tons of dry cargo. The Cairos are capable of accelerating to 10 knots and walking through crushed ice.

It is easy to see that the new Platform-Arctic tankers are larger and three times more spacious than their predecessors. In addition, the acceptance of a wider range of cargoes is provided - the tanker can issue and receive various liquids or transfer containers. To this should be added the ability to carry various special equipment for rescue, firefighters and other missions. The most important advantage is the higher ice class.

"Vice-Admiral Ferry" on the water
Thus, we are talking not just about tankers, but about a kind of integrated supply vessels - with a smaller displacement and certain restrictions on cargo. At the same time, such a ship is capable of operating in a wide variety of areas, up to the Arctic seas. Obviously, obtaining such tankers will help the fleet improve its logistics and ensure the combat service of ships in all areas of responsibility and in any conditions, even the most severe.

For all their usefulness, tankers of project 03182 have already faced a serious problem. For one reason or another, the essence of which has not yet been disclosed, the construction of four ships was seriously delayed. According to the plans of the middle of the last decade, when the first supply contracts were signed, the transfer of four tankers was to start in 2017 and be completed no later than 2020-21.

It is now the middle of 2020, and so far only two tankers have been launched, and only one is ready for testing. In case of a positive development of events, "Vice-Admiral Paromov" will enter service by the end of the year. After him, with an unknown delay, the "Mikhail Barskov" will be handed over to the fleet. Work on the other two vessels is likely to continue until 2022-23.

However, the last news show that the situation has changed for the better. The work is being successfully carried out and moving to a new stage. The first of the built tankers is being tested, and others will follow. KTOF and KCHF will receive a couple of new ships, which will have a positive effect on the state of the entire supply fleet - and at the same time on the combat capability of the Navy as a whole.

Ctrl Enter
Noticed oshЫbku Highlight text and press. Ctrl + Enter
We are
"Svetlana". History of creationShips built for 28.07.2013 of the year for the Russian Navy. Part of 1
Military Reviewin Yandex News
Military Reviewin Google News
21 comment
Information
Dear reader, to leave comments on the publication, you must to register.