Levers and cannon. "Royal Tiger" on trials in Kubinka 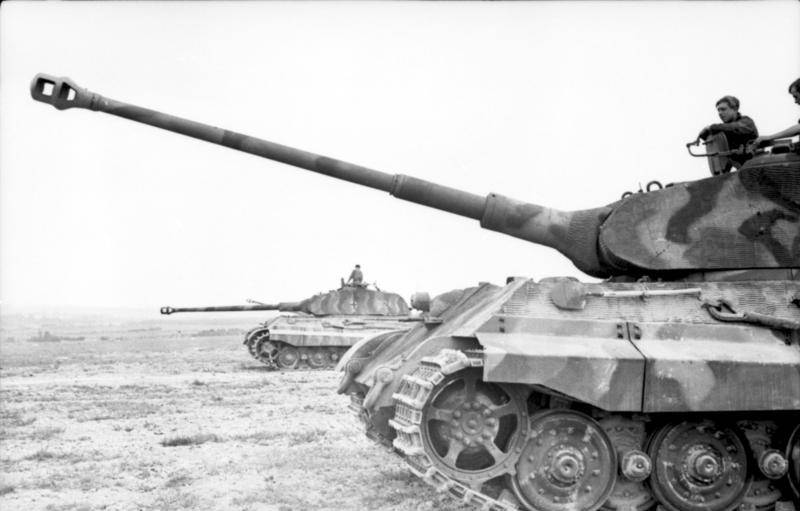 In the previous part The material dealt with the sea trials of the "Royal Tiger" (or "Tiger B", as the engineers called it), which were short-lived due to technical problems. The material was based on the report of the Scientific Testing Armored Range of the GBTU of the Red Army in the winter of 1945.

To complete the picture regarding the driving performance of the German car, it is worth paying attention to another report, which dates back to the fall of 1945. It is called “The results of measuring efforts on the control levers of foreign and domestic tanks"And represents a great historical interest. An attentive reader will surely notice that by the fall of 1945 there was no serviceable "Royal Tiger" in Kubinka: one had already been shot, and the second was idle in a slow state. Therefore, there was not much to experience. But at the disposal of the deputy head of the test site, engineer-colonel Alexander Maksimovich Sych, there was a much more interesting specimen - the captured Yagdtigr tank destroyer, whose suspension did not differ from the original heavy tank. The results of testing the efforts on the control levers, more precisely, on the steering wheel of this 70-ton monster, can be fully credited to the "King Tiger". "Jagdtiger B" (this is how it was called in 1945) was tested in a very representative company: "Panther", "Tiger", American T-26E3, M-24, M4A2, British "Comet 1" and Soviet IS-3, T -44 and T-34-85. Looking ahead, it should be said that the domestic equipment looked, with the exception of the T-44, in such a comparison not in the best way. 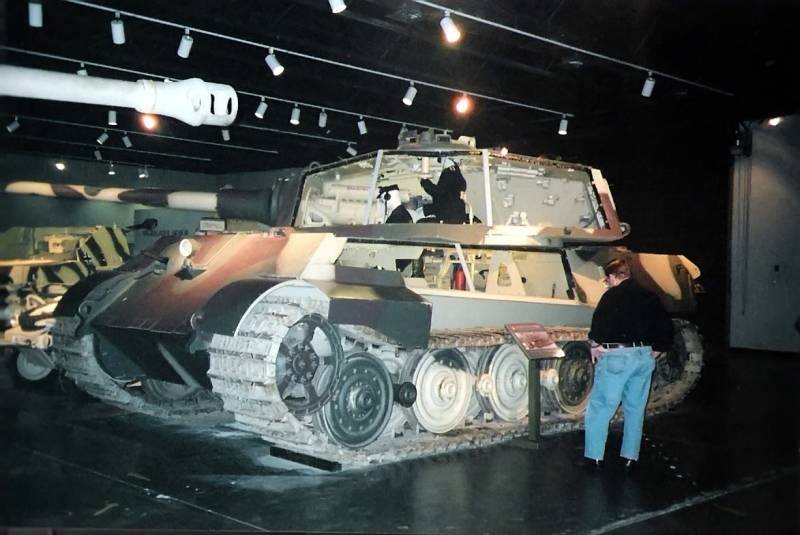 "Royal Tiger" at the Patton Museum in the United States. Source: en.wikipedia.org
A little about the test conditions. The tanks were deployed 360 degrees on soft wet ground with a dynamometer attached to the control lever. Once again, it is worth noting the scrupulousness of Kubinka's engineers in developing research methods. So, before the test turn, the tracked vehicles had to turn in place several times in order to remove the extra layer of dirt from the ground. Everything so that unnecessary factors do not affect the purity of the experiment. The test subjects had to unfold in several disciplines at once. First, in place in neutral. But only Panther, Jagdtiger and British Comet, equipped with planetary swing mechanisms with additional power input directly from the engine, were capable of such a trick. It is not known why the "Tiger" with a similar transmission did not turn around in these conditions. Most likely due to an engine malfunction as reported in the report. By the way, a German heavy tank passed an impressive 900 km before testing, which could have caused a breakdown. Be that as it may, "Panther" with "Jagdtigr" easily turned in neutral, while requiring only 5 kg of effort on the steering wheel. "Kometa" not only made the turn only on the third attempt, but also with a 20-kilogram effort on the levers. Due to understandable design features, the remaining tanks could not turn around in neutral.

Secondly, in Kubinka, efforts were made on the governing bodies when turning in 1st gear, and everyone managed to participate in this discipline. "Jagdtiger" here showed truly limousine habits: only 4,5 kg on the steering wheel when turning in both directions. For comparison: on the levers of the T-34-85, the force varied from 32 to 34 kg. And in the IS-3, which was the latest by that time, it took about 40 kg of effort to turn! To be fair, it is worth noting American tanks: the T-26E3 has about 35 kg of leverage, while the M4A2 has 30 kg. Domestic T-44 with modified kinematics of the drive transmission levers and installed servo springs required 12-13 kg per turn, which was quite comparable with the parameters of the "Tiger". "Panther" also came out with excellent marks, showing 6 kg of effort at the steering wheel. Further tests during turns in 1st and 2nd gear with radii of 10 and 15 meters did not particularly change the indicated disposition. The leaders were invariably "Yagdtiger" and "Panther", and among the outsiders IS-3, T-34, T-26E3 and M4A2. At the same time, the German self-propelled gun also had reserve control levers, the efforts on which also did not exceed 12-14 kg. 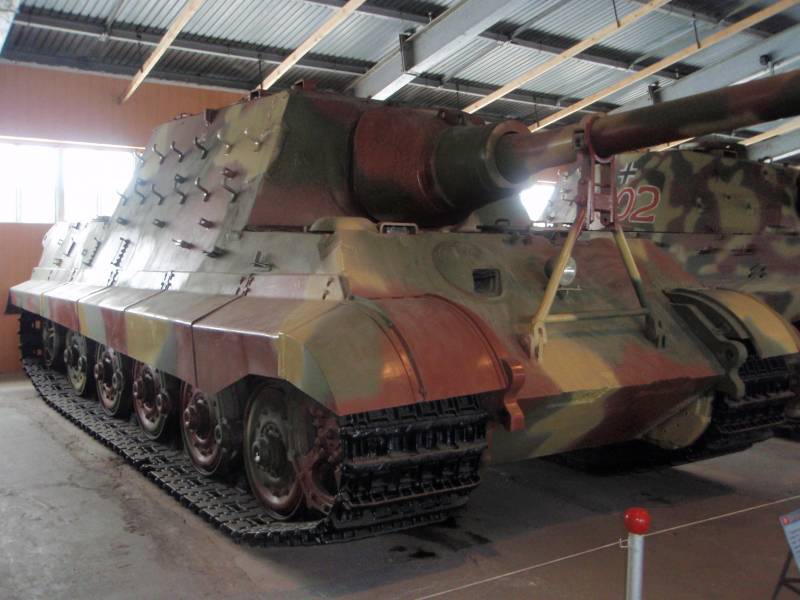 "Jagdtiger" in Kubinka. Obviously the most driver-friendly SPG. Source: ru.wikipedia.org
The report's disappointing conclusion was the dry thesis:

"The efforts spent on turning the domestic T-34-85, IS-3 and American T-26E3 and M4A2 tanks are great and tire drivers when making long marches."
It is interesting that the test results did not appear on the pages of the specialized edition "Bulletin of armored vehicles".

And the "King Tiger" in the guise of "Jagdtiger" emerged from this comparative test as the unconditional winner. It did not break down, as the preliminary mileage was about 260 km, and demonstrated the most comfortable conditions for a driver. It is likely that, given the smaller mass of the tank relative to the self-propelled gun, the efforts on the steering wheel of the "Royal Tiger" would have been even less.

Fast forward almost a year ago, to October-November 1944, when a serviceable tank was being prepared for artillery fire in Kubinka. Initially, test engineers carried out a complete revision of the observation devices. There were thirteen of them at once: a monocular articulated telescopic sight with variable magnification, a spotter periscope temporarily installed in the commander's cupola, a machine-gun optical sight with a characteristic six-meter dead space and ten observation periscopes. The latter include seven periscopes for the commander and one each for the driver, the radio operator and the loader. Based on the results of testing the viewing devices, the corresponding diagrams of vertical and horizontal visibility were made. Only the loader's visibility was recognized as insufficient, and the tank commander had to raise the fifth point above the seat for observation through observation devices. To find targets and adjust fire at ranges up to 3 km, the commander used a spotter periscope. In the report, the engineers especially highlighted the successful monocular sight, which first appeared on the King's Tiger. It provided the gunner with a variable field of view and magnification, which seriously increased the convenience of firing at any distance. 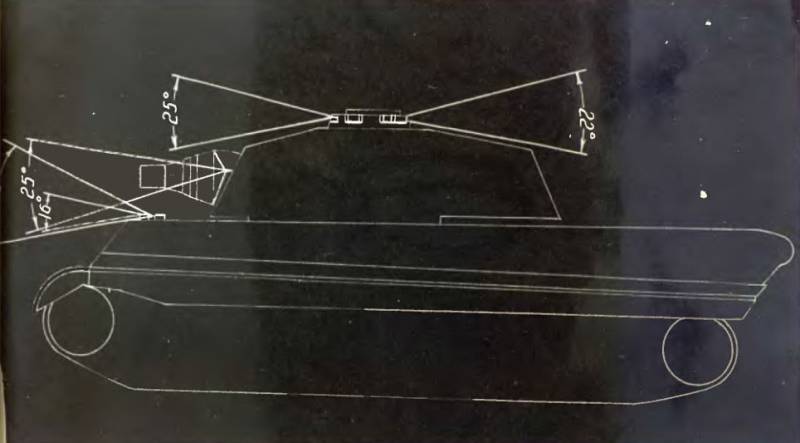 Vertical visibility scheme from the tank. Source: test report
But with the assessment of the mechanism for turning the tower, Soviet engineers were not so unambiguous. They noted that the mechanics of the turret turning unit have hydraulic drives assembled from units used in machine tool construction. Perhaps this was a consequence of unification, and, possibly, a chronic lack of resources and time to develop their own compact unit. As a result, the drive turned out to be cumbersome and complex. To turn the turret, it was required to start the engine; otherwise, the gun was guided along the horizon by two hand-operated flywheels at the loader and gunner. At the same time, the hydraulic drive was two-stage and in second gear it could turn the turret 360 degrees in just 20 seconds. To do this, it was required to maintain the engine speed around 2000 per minute. And to manually deploy the tower, it took 673 turns of the flywheel with a force of about 2-3 kg. 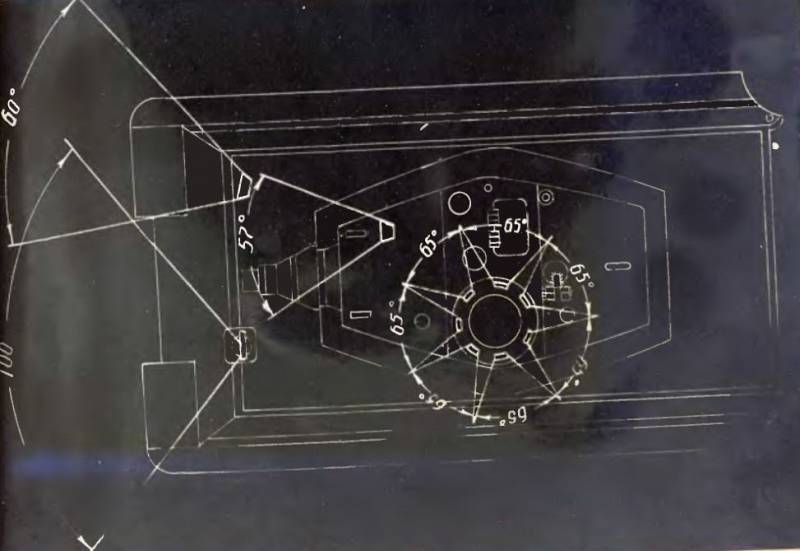 Horizontal view from the tank. Source: test report
The tests of the 88 mm KWK-43 are modestly summed up by Kubinka's engineers as good. A total of 152 shots were fired: 60 armor-piercing tracer (initial speed - 1018 m / s) and 92 high-explosive fragmentation (initial speed - 759 m / s). The rate of fire for one target averaged 5,6 rounds per minute and, interestingly, little depended on the type of turret traverse drive used, manual or hydraulic. The report writes in this regard:

"The average aiming rate of fire when firing from a standstill at one, two and three targets located in the 35 ° sector, when using a manual turret drive is 5 rounds per minute, and when using a hydraulic drive 5,4 rounds per minute."
The tests of the tank's firing accuracy on the move were unexpected. In an era when tank stabilizers were only in the minds of engineers, this looks strange. Nevertheless, the "Royal Tiger" armor-piercing tracer was hitting at a speed of 10-12 km / h on a 4x6 meter shield from a distance of about 1 km. Even more unexpected was the high accuracy of shooting in such conditions: out of 12 shots, 8 hit the target! The reason for this accuracy was the hydraulic turret rotation drive, which allows you to accurately align the crosshair with the target, and the semi-self-braking lifting mechanism of the gun provided height guidance. It is quite possible that the firing on the move was the reason for the premature failure of the gun's lifting mechanism.

A separate test program was the assessment of the gas content of the fighting compartment during firing. In the experiment, they fired in groups of 5 shots, followed by taking air samples to analyze the level of carbon monoxide. Nothing new was found here: with the engine running, fan and barrel blowing, up to 95,9% of the dangerous gas was removed from the fighting compartment. The most powerful ventilation was considered to be an electrically ventilated fan located above the breech of the gun.

Author:
Evgeny Fedorov
Articles from this series:
Motivated cruelty. The sorrowful adventures of the "Royal Tiger" in Kubinka

Ctrl Enter
Noticed oshЫbku Highlight text and press. Ctrl + Enter
We are
Heavy tanks of the USSR in the postwar periodThe fire control devices of the Soviet and German tanks of the Second World War. Myths and Reality
246 comments
Information
Dear reader, to leave comments on the publication, you must to register.