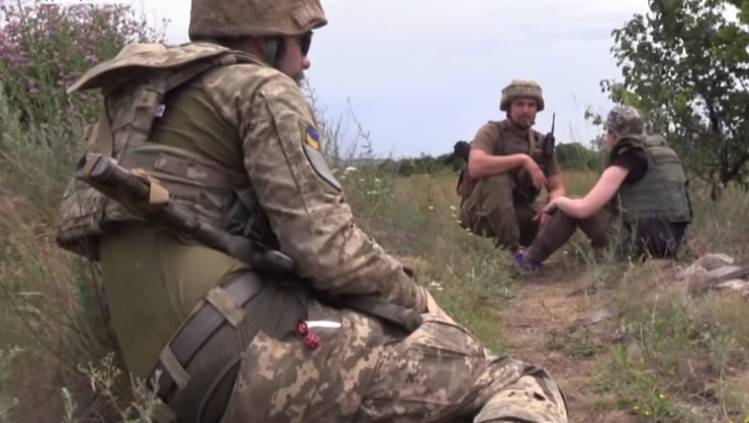 I confess that when I was asked to express my opinion on the terrorist attacks taking place in Ukraine, my first thought was about a feuilleton. Indeed, the way these crimes occur and how the Ukrainian security forces react to them makes many people smile. However, after reflecting on the situation, having talked with specialists, including Ukrainian ones, I realized that it was necessary to speak seriously. Simply because the events in Ukraine are really serious.

Why terrorist attacks in Ukraine do not scare people

Have you ever thought about the psychological difference between a front-line soldier and a person for whom war is just another film or TV show? Why does war change a person so much? Why part of the front-line soldiers, after returning to normal life, quickly enough become heroes of crime reports?

The answer to this question was found long ago. Remember the phrase from the film "Belorussky Station", said by the hero of Anatoly Papanov?

“You see, I suddenly for a moment felt like at the front. Everything is clear, here is the enemy, near his, and our cause is just. ”
That's right, everything is clear! A person does not think about his own death, he thinks about victory, about his own. Only one detail in his life has changed. Ours remained close, but the enemy has changed. He does not kill, rob, or rape. He just thinks differently. Thinks peacefully. And wins in all situations also peacefully. Not a poke in the throat or an eye, but a lawsuit. Not by automatic fire, but by the correct use of all the rights and benefits that a peaceful life provides.

What is happening today with those Ukrainians who are far from the war, but close to "comic terrorist attacks"? And about the same thing happens to the soldiers in the trenches after the first few days of fear. The fighter gets used to the whistle of bullets, to the explosions of mines. In the same way, an ordinary clerk or market worker, going to work in the morning, fully admits that he will become a participant in the next "joke".

It is quite possible that another ATO-OOS veteran will suddenly decide to take him hostage simply because he will not be able to solve elementary issues of peaceful life. What I wrote above. Yes, it might be a bit uncomfortable, but ultimately it will just be another adventure and end well. Simply put, a person perceives a terrorist attack as part of ordinary life, as a perfectly acceptable incident.

Look at the comments on reports of terrorist attacks and the operations carried out to eliminate them. An excellent cut of the mood in society. You read and catch yourself thinking that the comments are clearly not about the article about the terrorist attack. Rather, about the performance of a comic group or a KVN team. And immediately I remember the parable of the shepherdess and his rally of adults by shouting "wolves!"

What is the reason for a series of terrorist attacks

There are many versions of the committed terrorist attacks. From "the idiots closed the madhouses so that other idiots would organize terrorist attacks" to "Muscovites specially train mentally unbalanced people to commit terrorist attacks." As usual, the situation is clear to everyone except specialists.

A very popular version is that the terrorist attacks were prepared by someone for the purpose of something. I deliberately did not begin to describe who and why prepared these actions. Readers themselves can substitute the word they need, depending on political preferences. But, from my point of view, this version does not stand up to criticism. If, of course, we take it as an axiom that the acts were not developed in any kindergarten or in the lower grades of school.

The main reason for the series is, I think, firstly, the nervousness in society. The same uncertainty about the future. Not only economic, but also moral. Those ATO veterans are no longer heroes today. More and more often they are looked at with contempt. Look at home! Something similar was observed in Russia in the first Chechen war, when the liberal media made murderers and rapists out of soldiers in a war.

Secondly, all political forces in Ukraine already understand that democracy must end. This is exactly how Ivan Krylov's fable about the swan, crayfish and pike becomes clear to the Ukrainians. Society is waiting for the Savior! No, not the new coming of Jesus Christ is popular among Ukrainians today. Do you need a Ukrainian Stalin or ... Putin. The "iron hand" of the ruler is needed!

Thirdly, the series was caused by the act of President Zelensky when he followed the lead of the Lutsk terrorist. For mentally unbalanced people, this was the impetus for action. And, most likely, this will not end with three terrorist attacks.

Of course, the committed acts of terrorism will be used by opponents and supporters of President Zelensky for their own needs. The situation in Ukraine is awful. In every sense of the word. Politics, economics, medicine, education, industry and ... Today there is no industry in Ukraine that you can boast of. There is no sphere of public life where real successes would be observed.

By the way, quite a few times I have read and heard opinions about the actions of the special forces of the Ministry of Internal Affairs and the Security Service of Ukraine during these terrorist attacks. How much bile and misunderstanding. Yes, outwardly it did not look like a "life-threatening operation." But I would like to ask the "anti-terrorist" experts: what criteria do you use to judge the success or failure of an operation? By the number of cartridges from the machine gun on the asphalt? Or by the number of rolled noses and broken cheekbones?

Even if the special forces officers in ballet tutus dance the dance of little swans in front of the terrorists and at the same time take and rescue the hostages without loss, this is a successful operation! Believe me, special forces - they are special forces everywhere, and any terrorist will be able to correct the face of the face. Risking his own life for the lives of the hostages is his job.

How Ukrainian politicians use terrorist attacks

As I wrote above, the terrorist attacks will be used by all political forces in Ukraine for their own purposes. Ukraine will have to go through a politically sultry autumn. Local elections will be the culmination of this fall. Zelenskiy's team simply needs to use all administrative mechanisms to win this election.

The rating of President Zelensky fell to minus in June according to polls by the Center. Razumkov. The anti-rating has exceeded the rating, and the situation is practically not improved. I think the division of the country into quarantine zones, which began on August 3, is one of the measures to isolate voters who clearly support Poroshenko from the elections.

President Zelenskiy, with the necessary courage and determination, could very well take the situation under his own control. For all the apparent power of his opponents, the president remains the commander-in-chief of the Armed Forces of Ukraine. And the artificial confrontation he created between the heads of the Ministry of Internal Affairs and the SBU plays into the hands of him and his team.

However, for such actions, the Ukrainian president clearly has a small intestine. And it is quite possible that the authorities will agree to the sudden appearance of a "gray cardinal" in Zelensky's retinue. The past year has shown that this is quite possible.

Arsen Avakov! Duty scarecrow for most Ukrainians. A person who really has a will and is able to usurp power. At the same time, Avakov has up to 300 thousand employees of the Ministry of Internal Affairs under arms. In addition, no one hides the fact that the nationalists and the right-wing of Ukraine also obey Avakov. And this is a decent reserve that can be quickly put into operation.

It was not for nothing that I called Arsen Avakov the scarecrow on duty. As long as there has been post-Maidan Ukraine, so many Avakov “seize” power. In fact, in my opinion, the head of the Ministry of Internal Affairs is kept for emergency situations. He is fit for the role of a dictator in transition. Not more. And it can become one only when the “maydauns” feel their own death.

Another contender for the return of power, as he promised when electing Zelensky, is Petro Poroshenko. Unlike Zelensky and Avakov, Poroshenko has no military power. He does not have any serious paramilitaries. But he has huge media resources and support from Western politicians.

Through the media controlled by Poroshenko, he hopes to swing a chair under Zelensky and return power in the "Maidan way" - through the demands of the street. True, at the moment all the efforts of the former president have only led to the fact that when conducting surveys of the population, sociologists state an unprecedented growth in the popularity of ... Yanukovych! The overwhelming majority of Ukrainians supported the return of the ousted president to power (from 65 to 80%, according to various polls).

The time has come for surprises

The destabilization of the socio-political situation in the country, the atmosphere of uncertainty about the future, an even greater split in society on key issues such as the language issue, as well as a large number of weapons in the hands of the population gives rise to terrorist attacks and crimes with the use of weapons. Ukraine is inadequate! Ukraine has entered a zone of turbulence!

How many times Ukrainians, and we too, were amazed at the decisions of the Ukrainian courts. Known murderers, whose guilt has been proven, are released on bail of the Rada deputies. Women who openly threaten to assassinate the country's president, too. How many times have we seen the lawlessness of "pravosek" and veterans, which was not stopped by the police! I will dare to quote Mikhail Pogrebinsky, director of the Kiev Center for Political Research, which he gave to KP:

“The Minister of Justice Denis Malyuska visits the cells of those sentenced to life imprisonment, and on the way out says that there are good people sitting there, some of whom he would, he says, would gladly take to his work. As a result, Ukrainians are disoriented. "
I once predicted the disintegration of Ukraine. Today we are witnessing this very process. This is not a momentary explosion. This is a long process of fruit ripening. And ultimately reshaping the political map of Ukraine. I see that the process will not be limited to this country only. Quite a lot of countries are involved in it. It changes the political, economic and cultural contours of the world.

And Ukraine is just a part of these changes ...

Ctrl Enter
Noticed oshЫbku Highlight text and press. Ctrl + Enter
We are
Situational analysis of the death of the MH17 flight (Malaysian Boeing 777), made on the basis of engineering analysis from 15.08.2014Results of the week. “In our cooperative, the board is always agreed”
69 comments
Information
Dear reader, to leave comments on the publication, you must to register.