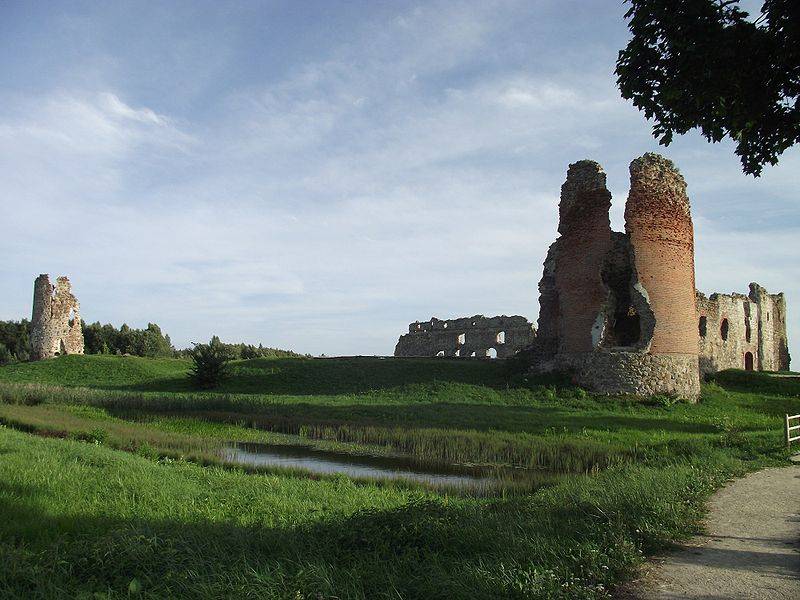 On December 17, 1599, the Livonians launched a new assault on Lais, but suffered a severe setback. A shower of arrows, cannon balls and bullets fell on the assault columns, our gunners shot down two enemy guns. Order bollards and mercenaries, in orderly ranks marching into the attack, halved, rolled back in disorder. About 400 soldiers remained at the walls.

In fact, Russia won the war with Livonia. The Livonian Order suffered a military defeat. However, on the diplomatic front, the situation has deteriorated sharply. The neighboring powers (Sweden, Denmark, Lithuania and Poland) had their own views on the Livonian lands. The Russians had defeated Livonia, and now it was possible to begin the division of the booty. Livonia was important both from the military-strategic positions, which strengthened any Baltic state, and from the economic ones. Trade routes passed here, enriching the nobles and merchants, giving access to Western European goods, including weapon.

As a result, in the West, public opinion begins to form about the "Russian barbarians and invaders" who "shed Christian blood." At the same time, the neighbors are beginning to partition Livonia. In March 1559, Danish ambassadors announced the claims of their new king, Frederick II, to Reval and Northern Livonia. Then the Grand Duke of Lithuania and Poland, King Sigismund II Augustus, demanded that Moscow leave alone the king's relative, the Archbishop of Riga, hinting that it might come out in his defense. On August 31, Master Gotthard Kettler (Kettler) concluded an agreement with Sigismund II in Vilna, according to which the lands of the Order and the possessions of the Riga archbishop were transferred under "clientele and patronage", that is, under the protectorate of the Grand Duchy of Lithuania. On September 15, a similar agreement was concluded with the Archbishop of Riga Wilhelm. As a result, South-Eastern Livonia was brought under the control of Lithuania and Poland. In return, Sigismund promised to go to war with the Russians. After the war, the Grand Duke of Lithuania and the Polish king promised to return these lands for substantial monetary compensation. Lithuanian troops were brought into Livonia. Finally, Sweden "stood up" for the Livonians.

The Russian government firmly stood on the fact that the Livonians are the eternal tributaries of the Russian sovereign, and they did not pay tribute, the churches were ruined, therefore they must pay for their mistakes. Nevertheless, Moscow had to make concessions. Letting the Danes go home (and they were historical enemies of the Swedes, so quarreling with them was not in hand: relations with Sweden were on the brink of war), on April 12, 1559, the king announced at a farewell audience that he could give Livonia a truce from May 1 to November 1. The Livonian Confederation received a respite and began to gather new forces for a counteroffensive.

It should also be noted that Russia at this time was associated with the war with the Crimean Khanate. The court group headed by Alexei Adashev believed that the main direction of the movement of the Russian state was the south. It is necessary to eliminate the threat from the Crimean horde and expand land holdings in the south. The war in Livonia interfered with these plans. In 1559, the tsar and the Boyar Duma conceived a large campaign against the Crimean Khan. The benevolent neutrality of Lithuania was required. This made it possible to use the operational line of the Dnieper. Therefore, a large army was gathering in the south of Russia, and light ship ratios operated in the lower reaches of the Dnieper and Don. 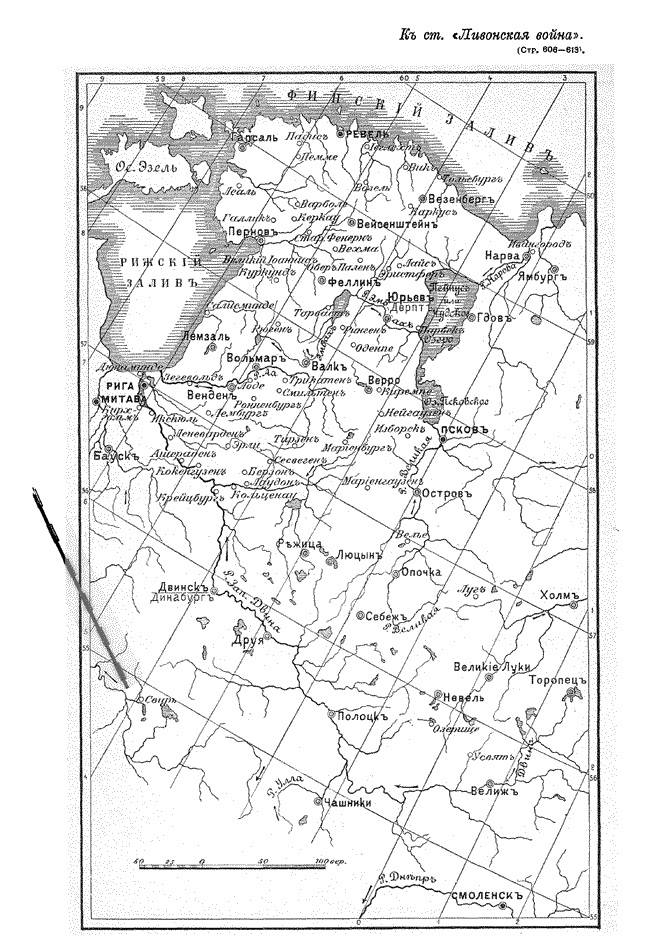 Map of the main cities and strongholds of eastern Livonia. Military encyclopedia of Sytin

Thus, Moscow believed that the Livonian problem had been largely resolved. Soon the master will ask for peace. The Russian government was wrong. Taking advantage of the truce, Livonia was preparing for revenge. In the spring and summer of 1559, the Livonians negotiated aid with Lithuania, Sweden and Denmark. Livonian Master John von Fürstenberg and his deputy Gotthard Kettler (he, in fact, already served as the head of the Order) were actively preparing for a new campaign. Order lands and castles were laid, money was sought, soldiers were hired. Kettler planned to attack Dorpat (Yuryev) with a collected army, as in the previous year. The Livonians hoped for the help of the "fifth column", which would help to take the fortress.

Livonia began the campaign even before the end of the truce. In October 1559, the Livonians opened hostilities. Moscow became worried, the situation of 1558 was repeated, when Kettler launched an offensive on Yuryev, but got bogged down in the siege of Ringen (Heroic defense of Ringen). The defense of the northwestern borders is beginning to be strengthened. Troops from Pskov and other places were to march to Yuryev. Meanwhile, the Livonians went to Yuryev and on October 22 defeated the Russian detachment in its vicinity. The enemy continued to build up forces in the camp near Nuggen, 3 miles from Dorpat-Yuriev. Troops arrived from Riga and the main forces with artillery under the command of the master himself. On November 11, the Livonians launched a new attack on the Russians. They attacked the camp of Voevoda Pleshcheev (Novgorod army) and killed more than 1 people, captured the entire train. The Russian voivode poorly organized reconnaissance and protection of the camp, so the enemy's attack was sudden.

The situation near Yuryev was tense. Two defeats in a row and the loss of supplies demoralized most of the Russian field troops in the Yuryev area. The reinforcements were late. Autumn thaw destroyed all the roads. True, the Livonians also suffered from it. The bulk of the Livonian army was infantry, and it was very difficult to drag artillery along the soggy roads. Only on November 19 did the Germans reach Dorpat itself. At the same time, they stopped at a considerable distance, there was powerful artillery in the fortress. Kettler's "outfit" was small. The Russian garrison was headed by an experienced and resolute voivode - Prince Katyrev-Rostovsky. The Livonians stayed near the city for 10 days. At this time, both sides were engaged in artillery fire, the Russian garrison made several successful sorties. The most successful and largest was on November 24, when the Russians threw the enemy back from the city. Up to 100 Germans were killed, our losses were more than 30 people. On November 25, the archers, sent to the rescue by Ivan the Terrible, entered Dorpat.

The unsuccessful "standing" led to divisions in the Livonian camp. The master offered to abandon the aimless stay near Yuryev and make a raid deep into the Russian lands, transfer the hostilities to the Pskov region. Other commanders suggested continuing the "siege". In the end, without reaching an agreement, the Livonians left Dorpat for 12 versts and set up camp at the well-fortified monastery of Falkenau. The Livonians remained there for almost two weeks. All this time, the Germans fought off the attacks of small Russian parties from the Yuryev garrison. 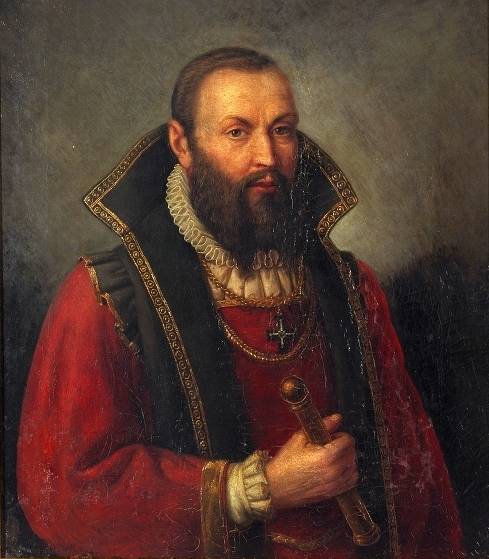 Then the Livonian command decided to take the castle of Lais (Lajus) in order to end the campaign with at least a small victory. The fortress was defended by 100 boyar children and 200 archers under the command of Prince Babichev and Solovtsov. This small castle was located west of Lake Peipsi, northwest of St. George's. Yurievsky voivode Katyrev-Rostovsky learned about the enemy's plans from the captured "tongues", so the garrison of Lais was reinforced with a hundred archers. The Russians at the beginning of the Livonian War had a high fighting spirit. The fortifications were strong: four powerful towers (two of them in artillery), high walls, up to 13-14 m with a thickness of more than 2 m. In addition, the campaign was at its end. The Livonians were battered by the failure at St. George's, rearguard battles, were tired of the impassability of the road, the severe lack of food and fodder. A severe, snowless winter has begun. The soldiers were starving and dying of disease. They grumbled, demanded payment of salaries and return to winter quarters. Dissensions continued among the command. The Riga commander Christoph finally fell out with the master and took his detachment to Riga.

The departure of the Riga detachment did not change Kettler's plans. On December 14, 1559, after an artillery attack, the Livonians went to the assault, but it was repulsed. The Order's artillery continued shelling and smashed the wall into several fathoms. The Russians offered negotiations, but the Livonians refused, confident of victory. While the enemy was preparing for a new assault, the Russians managed to erect a wooden wall behind the breach and dug a moat up to 3 m deep. On December 17, the Germans launched a new assault, but suffered a severe failure. A shower of arrows, cannon balls and bullets fell on the assault columns, our gunners shot down two enemy guns. Order bollards and mercenaries, in orderly ranks marching into the attack, halved, rolled back in disorder. About 400 soldiers remained at the walls, including two Revel Hauptmans - von Strassburg and Evert Schladot. A severe defeat, high losses, a shortage of gunpowder and food forced the master on December 19 to lift the siege. Thus, the Livonian offensive ended in complete failure. The army was demoralized by setbacks, the soldiers fled.

The Russian Tsar Ivan Vasilievich, enraged by the perfidy of the Livonians, decided to immediately strike back. Already in the fall of 1559 in the Pskov region, a host was assembled, led by Prince I.F. Mstislavsky. The army was large: the regiments of the Big, Front, Right and Left hand and the Sentinel. Rati was given an outfit (artillery) under the command of Boyar Morozov, who successfully led the artillery near Kazan. The troop numbered up to 15 thousand soldiers, not counting the transport, koshevoy, artillery servants. Mstislavsky was one of the most experienced Russian generals and was highly respected by the tsar.

Even before the exit of the Russian army, light detachments from Pskov and Yuriev began to ravage the "German land". So, in January 1560, the Yuryevsky voivode twice sent his people to the lands of the Order. Russian troops fought in the vicinity of Tarvast and Fellin. The Russian army aimed at Marienburg (Olysta, Aluksne) - the city and the order's castle. This strategic point in southern Livonia, according to the Vilna agreement, was supposed to go under Lithuanian control. Therefore, Moscow decided to occupy it. On January 18, 1560, the advanced forces of the Russian army under the command of the governor Serebryany crossed the border and for two weeks smashed the lands between Fellin and Wenden. Then the forward detachments went to join with Mstislavsky. Silver's troops conducted reconnaissance in force, finding out that the enemy did not have an army for a counterattack, and covered the offensive of the main forces. At this time, the Russian army was slowly moving towards Marienburg.

On February 1, 1560, Russian troops reached Marienburg. The castle, located on an island in the middle of a lake, was a challenging target. Therefore, the siege work dragged on. Only on February 14 Morozov began to bombard the fortress. It did not last long, "from morning to lunchtime," as a result, considerable gaps appeared in the walls. The Marienburg commander E. von Sieburg zu Wischlingen decided not to wait for the assault and threw out the white flag. Master Kettler arrested the commander for cowardice, he died in custody. The master himself at that time was sitting in Riga and was waiting for help from King Sigismund. On this victorious note, the campaign ended. The troops, leaving the garrison in Marienburg, returned to Pskov. 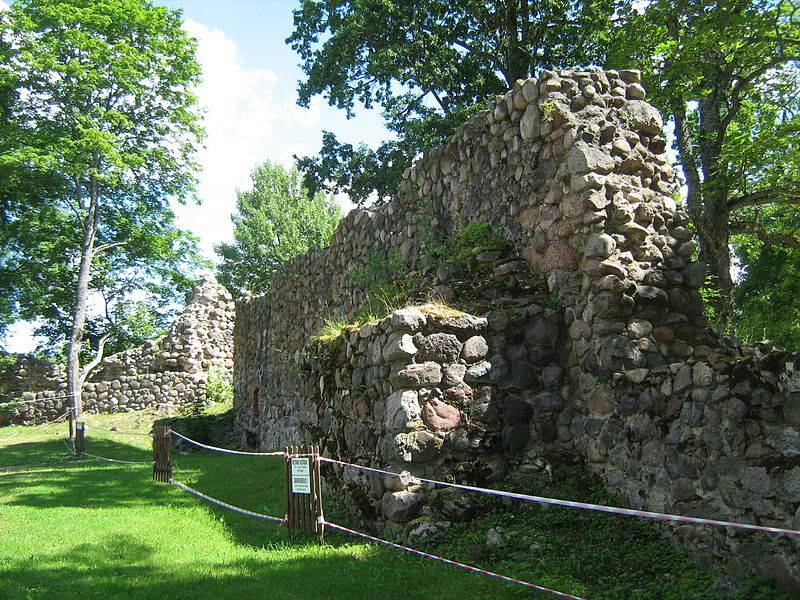 Marienburg castle walls
To be continued ...